ABSTRACT: The mycological analysis of stored seed of groundnut (Arachis hypogaea) through agar plate as well as blotter paper methods of study revealed presence of 16 fungal species viz., Alternaria alternata, Aspergillus candidus, Aspergillus flavus, A. Niger, A. ochraceous, A. phoenicis, A. tamari, A. terreus, A. sydowi, Fusarium moniliforme, F. oxysporum F. solani, P. glabrum, Rhizopus nigricans, Trichoderma viride and Trichothecium roseum. Out of 20 essential oils extracted from leaf of plants and assessed for their antifungal potential only leaf oil of Tinospora cordifolia,(Willd.) Miers ex Hook. F. & Thoms exhibited absolute toxicity (100%) against dominant fungi Aspergillus flavus, A. niger at 400 ppm concentration. This showed fungicidal activity at 500ppm.It showed MIC against 10 fungi at 400ppm, controlled 15 fungi at 600 ppm. There was no ill effect of physical factors viz., temperature treatment up to 100 °C, autoclaving at 15 lb/square inch pressure at 120 °C and storage up to 105 days on activity of leaf oil. In vivo studies depict that oil of T.cordifolia as seed dressing agent and as a fumigant was able to preserve seeds of groundnut up to 105 days separately in polyethylene containers with minimal changes in organoleptic behaviour during storage.

INTRODUCTION: The food grain production is dependent on quality seeds in a country. A quality seed is directly related with the production of healthy crop. For disease free crop Healthy and pathogen free seeds are the basic requirements. Seeds are stored for a considerable period of time and 25% of the world's crops are affected by mould or fungal growth. In India around 82% of groundnut produced is used for edible oil production, 12% as seed and 5% as feed.

For disease transmission seed is responsible because they carry a number of pathogens in the field or in the post harvest storage condition.

Synthetic chemicals are present in market to control post harvest biodeterioration but has been restricted due to their carcinogenicity, teratogenecity, high and acute residual toxicity, hormonal imbalance, long degradation period, environmental pollution and their adverse effects on food and side effects on humans 2, 3, 4.

The studies on essential oils have shown that they are readily biodegradable and less detrimental to non-target organisms as compared to synthetic pesticides. Application of essential oils as plant products is a very attractive method for controlling post harvest pathogens. Therefore, Tinospora cordifolia, (Willd.) Miers ex Hook. F. & Thoms (family Menispermaceae) leaf oil was explored during storage which is commonly known as amrita, guduchi and is widely used in indigenous systems of medicine 5, 6.

The aqueous extract of T.cordifolia stem has shown to produce immunological activity due to the presence of arabinogalactan. Root is a powerful emetic and used for visceral obstruction; its watery extracts is used in leprosy 7. Therefore mycological analysis of Groundnut seeds were carried and in vivo preservative activity trials were conducted with most active T.cordifolia leaf oil.

MATERIALS AND METHODS: During 2014-2016 grocery stores of Panchgaon, Gurgaon were surveyed for seeds samples of Groundnut. The seeds were analysed for their mycoflora following Kumar 8 through agar plate and standard blotter techniques. For this 100 seeds were equidistantly kept on separate petri plates containing 10 ml czapeks dox agar medium in agar plate method. In each plates 5 seeds were kept.

In blotter method three layered moistened blotter pads in sterilized petriplates inspite of medium and the seeds were similarily plated separately. The assay plates were then kept at 25±2°C in incubator and observed daily up to 7 days for appearance of fungal colonies. They were isolated, purified and identified with the help of fungal keys.

In order to know the internal seed mycoflora, the groundnut seeds were first surface sterilized with 0.1% sodium hypochlorite for one minutes washed with double distilled water and then subjected to agar plate and standard blotter techniques for isolation of the fungi. Excess water was removed from the seed using folds of sterilized blotters.

Number of colonies of a particular fungus X 100

Total number of colonies of all the fungi

With the help of Clevenger’s apparatus essential oils were extracted from leaf of 20 plants separately up to 7 hrs at 90±2 0C through hydrodistillation. Each essential oil was dried over anhydrous sodium sulphate and was stored at 4 0C under sterilized condition for further use. The antifungal activity was evaluated separately by Inverted Petri plate technique at 500 ppm concentration for both essential oils and two commercial fungicides Copper oxychloride and Carbondazim against fungal species.

Fungitoxic properties of Tinospora cordifolia leaf oil: For determination of MIC different concentration of the T.cordifolia leaf oil ranging from 200 to 600ppm were prepared by dissolving requsite amount of leaf oil in 0.5ml acetone and then mixing with 9.5ml czapeks dox agar medium separately. In control sets the petriplates having acetone and medium without T.cordifolia leaf oil were used. The fungal discs (5mm diam) obtained from periphery of seven day old culture of each of test fungi were aseptically inoculated in each of the treatment and control sets. They were incubated at 28±2 0C for 6 days. Diameters of fungal colony of treatment/control sets were measured in mutually perpendicular directions on the 7th d and the average was used to calculate the percent inhibition of mycelia growth of test fungi separately.

To measure its protectant power as seed dressing the stock solution of 100µl of T.cordifolia leaf oil was prepared by dissolving 100µl of oil in 1 ml of acetone. 200 g of seed of Groundnut were filled in polyethylene bags. They were treated with 1ml stock solution of the leaf oil. For proper coating groundnut seeds continuous shaking for 7 min were performed. Similarily, two contact fungicides such as copper oxychloride and carbendazim (1000 mg/ 200g seeds) were selected for comparison purpose and also run parallely.

The seeds were dressed in requisite amount of acetone in place of the T.cordifolia leaf oil and fungicide for control set. For making it airtight the polyethylene bags were sealed and kept at room temperature at 75±5% humidity. The presence/ absence of mycoflora were observed after 15 days to 105 days separately.

Botany of T.cordifolia: T. cordifolia is popularily known as Guduchi and Giloy. It is an herbaceous vine of the family Menispermaceae and native to India. Its entire part is used in Ayurvedic medicine. The leaves are heart shaped (Fig. 1). The succulent bark is having deep clefts spotted with lenticels creamy white to grey in color. It puts out long slender aerial roots. Flowers grow in lax racemes from nodes on old wood and yellow in colour. Fruits drupes, turning red when ripe. The stem of this plant berberine, columbin, chasmanthin, palmarin, tinosporon, tinosporic acid and tinosporol. The compounds identified in essential oil include alcohols (32.1 %), phenols (16.6 %), aldehydes (16.2 %), fatty acids (15.7 %), alkanes (8.3 %), esters (3.2 %), terpenes (1.2 %), and other classes of compounds (4.8 %). Major components of the leaf essential oil were hydroquinone (16.6 %), 2-hexenal (14.2 %), palmitic acid (14.1 %), 2-hexen-1-ol (11.5 %) and phytol (11.4%) 11 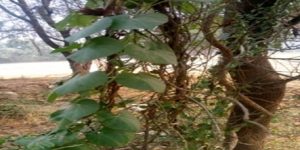 Statistical analysis: The results of five parallel measurements were expressed as mean ±SD. The observed data on antifungal activity, MIC, spectrum, effect of physical factors on the Tinospora oil were obtained by taking average of five replicates.

RESULTS AND DISCUSSION: There were sixteen fungal species namely Alternaria alternata, Aspergillus candidus, Aspergillus flavus, A. niger, A. ochraceous, A. phoenicis, A. tamari, A. terreus, A. sydowi, Fusarium moniliforme, F. oxysporum F. solani, P. glabrum, Rhizopus nigricans, Trichoderma viride and Trichothecium roseum were isolated by both agar plate as well as blotter paper methods on three months stored seeds of Groundnut. In which  Aspergillus flavus, A. niger, A. ochraceus and  A. terreus  were dominant showing  29.0, 27.0, 23.0, 21.0 in blotter and 29.0, 22.0, 22.0, 30.6 % in agar plate  method of study (Table 1).

The work recorded in literature reports that, plant essential oils are alternative of synthetic pesticides

(as they are known to have minimal environmental impact and danger to consumers in contrast to synthetic fungicides 22-23.

TABLE 2: EVALUATION OF T. CORDIFOLIA LEAF OIL AND SYNTHETIC FUNGICIDES AGAINST ASPERGILLUS FLAVUS AND A. NIGER

Determination of minimum inhibitory concentration (MIC) of a fungicide is necessary for prescribing its appropriate dose. High dose of fungicide increase wastage and may cause considerable loss to the quality of commodity treated. The MIC of T. cordifolia oil against dominant fungi A. flavus and A. niger was found to be 400 ppm (Table 3). It was found fungicidal at 500 ppm. It showed MIC  against 10 fungi at 400ppm while at 600ppm it controlled 15 fungi (Table 4).There was no ill effect of temperature treatment up to 100° C for duration 60 min, autoclaving at 15 lb/square inch pressure at 120 °C and storage up to 105 days (Table 5).

TABLE 5: EFFECT OF PHYSICAL FACTORS ON THE FUNGITOXICITY OF T. CORDIFOLIA LEAF OIL

T. cordifolia oil was more effective than commercial pesticides (copper oxychloride and carbendazim) during in vivo both during seed dressing and fumigation studies (aluminium phosphide and ethylene dibromide). The seed fumigation method was more effective than seed dressing method, protected seed of Groundnut up to 105 days from fungal infestation (Table 6) thereby increasing its shelf life. The seeds of control sets showed proliferation of several fungal species after 15 days of storage. Seeds stored with leaf oil as preservative showed better smell and taste in comparision to ones stored with pesticides. This study revealed that T. cordifolia leaf oil was more fungitoxicants than tested fungicides, thereby indicating the possibility of its exploitation as an ideal antifungal agent for protection of seeds of groundnut during storage. Since the plant T. cordifolia grow luxuriantly, it’s essential oil is an easily available, indigenous and renewable source of fungitoxicant with no known mammalian toxicity.

TABLE 6: IN VIVO EFFICACY OF T. CORDIFOLIA LEAF OIL AND COMMERCIAL FUNGICIDES IN PRESERVATION OF SEEDS OF ARACHIS HYPOGAEA

The fungicide must retain its fungitoxicity at the extreme of temperatures. The fungitoxicity was found to be thermostable up to 100C like Ocimum canum 26, Adhatoda vasica 9 Coriandrum sativum 10. The leaf oil retained its fungitoxicity on autoclaving (15lbs/square inch pressure). So this property of oil will facilitate the isolation of their constituents in active state.

A fungicide must retain its activity during long period of its storage. The fungitoxic factor in the oil of was lost in Ocimum canum 26  in 90 d of storage while persisted for  long period in the oil of Adhatoda vasica 9; Coriandrum sativum 10. The fungal toxicity was not affected by storage up to 105 days during present investigation. So this show that the leaf oil of T. cordifolia can be safely stored at any ambient temperature for long periods without loss in toxicity.

CONCLUSION: The study revealed that leaf oil of T. cordifolia was more fungi toxicants than tested synthetic pesticides, thereby indicating the possibility of its exploitation as an agent for protection of seed of Groundnut during storage. This may be a fumigant as alternate of synthetic pesticides.

ACKNOWLEDGMENT: Author is thankful to the Amity University Haryana for the facilities and constant encouragement.

CONFLICT OF INTEREST STATEMENT: I declare that I have no conflict of interest.