Chlorpyrifos (CPF) an Organophosphate insecticide was evaluated for its toxicity to produce reproductive disorders in rats following oral exposure. In the present study CPF was given to the mice at the dose levels of 10 and 20mg/kg body weight by Gavage method. A histological alteration of ovary and uterus was examined under light microscope. Its oxidative stress levels were studied by noting lipid peroxidation levels and hormonal changes (FSH) were also checked to evaluate the fertility rate in CPF induces toxicity mice. LD50 CPF was established for Swiss albino mice. Bioremediation was done to toxic induced mice using crude and extracted curcumin at 100 and 200 mg/kg body weight respectively.  In control group, the germinal epithelium was continuous with prominent and well defined different stages of graffian follicles. On the other hand chlorpyrifos (CPF) treated group showed ruptured germinal epithelium with multiple nuclei and matured graffian follicles with degenerated ovum. Corpus leutium cells were observed to be rudimentary. Unusual number of vacuolated spaces was observed in ovarian cortex. Thus, the present study reveals that chlorpyrifos causes degeneration of graffian follicle and germinal epithelium of ovary leading infertility in female. Control uterus shows well defined longitudinal and circular muscles on periphery with well structured endometrial cells and glands. In case of drug treated, degeneration of circular and longitudinal muscles was observed on periphery with clustered endothelial cells at lower concentration. At higher concentrations, degeneration in circular muscles is prominent. Longitudinal muscles were also on periphery with many vacuolated spaces along with vacuolated endometrial cells and glands were also rudimentary in structure. The remediation effect with crude and curcumin it showed the better and satisfactory results in histopathology as well as biochemical aspects.

INTRODUCTION: Invention of biocides viz.; pesticides, fungicides and herbicides are considered as boom to the agricultural sector on one side as they play a vital role and have wide applications in both agricultural and commercial pest control. They exhibit a broad spectrum of activity against different plant and animal pests. Resulting in improving in productivity of crops and meet the demands.

On the other side pesticides are reported to show deleterious effects by contaminating each and every layer of ecosystem due to their high potency on non-targeted organism especially human beings either directly or indirectly. The primary impact of pesticides is on hormonal imbalance and brain development and thereby consequently affects ability to learn. They owe their toxicity to their ability to attack Nervous system by oxidative desulfuration of cholinesterase enzyme1 as a resulting in  neuronal dysfunction and also effects other organs causing eye irritation, skin sensitization, carcinogenicity, Mutagenicity2, teratogenicity, asthma, infertility3 and immunosuppressant4.

Among the organophosphates, chlorpyrifos chemically called as O, O-diethyl O-(3, 5, 6-trichloro-2-pyridyl) phosphorothioate, is one which causes many hepatic and renal dysfunctions. As they are lipophilic in nature their main target is cellular bilayer lipoidal membrane. CPF shows different synoptosomal Acetylcholinesterase enzyme, AChE activity in different parts of brain5. Organophosphate pesticides are known to alter Na+/K+-ATPase6-8 activity, Mg+2 ATPase activity, Ca+2-ATPase activity, besides being a very potent anti-choline esterase compound9. As they are highly lipophilic in nature their main target is to attack the lipoidal membranes of the biological membranes and produces the reactive oxygen species (ROS) as a result of which oxidative stress is induced which leads to oxidation of lipid membrane and results in its degradation 10. Curcumin analogues are known to be have tumerones modulate  anti-inflammatory signaling and cell proliferation signaling 11. In the present study chlorpyrifos was administered at 10 and 20mg/Kg body weight /day for 14 and 21 days to the Swiss albino mice. Successively biochemical and histopathological analysis was done.

Plant material: Commercially available rhizomes powder of Curcuma longa was selected as a plant material for the extraction of the active ingredient called curcumin.

Preparation of Extract: Crude turmeric powder contains maximum percentage of curcumin (approximately 80%) and the rest constitutes volatile oils and resinous substances. Curcumin was separated by continues hot extraction process using soxhlet apparatus. 30g of crude turmeric powder with 95% ethanol in a soxhlet extraction until all the coloring material is extracted. Distill off the alcoholic extract to a semi solid brown color mass. Distill with 50ml of hexane/pet. Ether and extract twice with equal volume of 0.1% NaOH solution. Oil extract was combined and acidified with dilute HCl until yellow color precipitate is formed. Allow it to settle for 15 minutes. After the settling of the precipitate for 15 minutes, concentrate the extract by boiling in boiling water bath. During the process of boiling resinous material would agglutinate and form lumpy mass. Filter the solution in hot conditions and concentrate the filtrate to very small volume and finally cool to get the crystals of curcumin. This extracted curcumin was characterized by Infrared (IR) Spectroscopy and melting point was noted as 180-183˚C and close to the literature value.

Animals were housed and allowed to free access to food and water. All experimental procedures were conducted as per the guide lines of CPCSEA (committee for the Purpose of Control and Supervision of Experiments on Animals).

Acute Toxicity Studies (LD50): The acute oral toxicity study was carried out as per guidelines set by Organization for Economic Cooperation and Development (OECD).

Acute Toxicity Studies: The mice were administers in increasing dose levels of CPF at 35, 45, 55, 65, 75 mg/kg body weight  respectively and LD50 was evaluated.

Bioremediation: After treating the mice with CPF of different concentrations for 21 days the crude and extracted curcumin was given as a dose (Table 2). After 7 days of remediation the mice were sacrificed from each group for histological and biochemical analysis.

(* n= no. of animals in each group); CPF was injected to the mice (Gavage method) successively for 21 days

Histopathological Studies: After every sacrifice the collected blood by ocular puncture is centrifuged within 1h for 15 min at 3500 rpm to separate the serum to carry out further biochemical analysis. The selected organ is dissected out axed it in 10% neutral formalin solution and tissue was processed. For each organ serial sections (4-6 µm) were made. These prepared slides were stained with Hemat- oxylin- Eosin (H & E) and examined morphometrical under LM.

Biochemical Assessment: With the separated serum following biochemical analysis was performed to establish the effects of CPF induced toxicity and the remedial effects of the turmeric extracts.

Lipid Peroxidation Levels: LPO gives the amount of lipid oozes out from lipid biomembrane. It measures the melanaldehyde in blood sample.  LPO test was performed with separated serum of different groups of control, and treated mice according to Okhwa et al., 1979 12.

FSH Levels: FSH levels influences the growth and maturation of follicles, and also stimulates the granulose and thecal cells which begin to secrete steroidal hormone principally estrogen into follicular lumen. FSH is also responsible for the maturation of G.F as well as ovulation. It is done by Direct ELISA method. 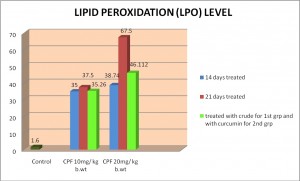 TABLE 4: EFFECT OF CPF AND BIOREMEDIATION ON THE FSH LEVELS 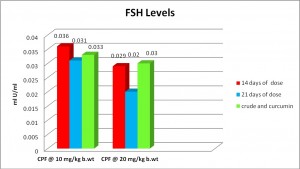 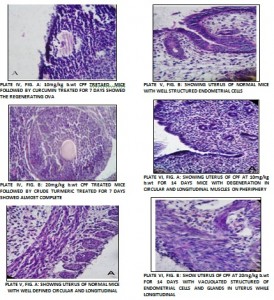 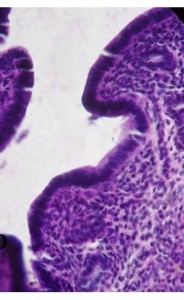 ACKNOWLEDGEMENT: It is author’s privilege and gratefulness to thank Mahavir Cancer Sansthan and Research Center for allowing to undertake the work and also for laboratory and infrastructure facilities. Also conveys special thanks and regards to the Director, Dr. J. K. Singh, H.O.D., Prof A. Nath, Dr. Arun Kumar, Dr. Mohammad Ali for their guidance throughout. Also thankful to one and all, who helped directly and indirectly and whose name is not mentioned here.