Chlorpyrifos (CPF) an Organophosphate insecticide was evaluated for its potential to produce reproductive toxicity in rats following oral exposure. In the present study mice were given CPF at the dose level of 10 mg/kg body weight by Gavage method for 14 and 21 days. Morphological alterations of ovary were examined under LM. Its oxidative stress levels were also evaluated by Lipid peroxidation levels and hormonal changes (FSH) were also measured to evaluate the fertility rate in case of CPF induced toxicity mice. Bioremediation was done to the toxicity induced mice using extracted curcumin at 100 mg/kg body weight for 7 days. In control group, the germinal epithelium was continuous with prominent and well defined different stages of graffian follicles. While in chlorpyrifos treated group ruptured germinal epithelium with multiple nuclei were observed. Degenerated ovum was observed in matured graffian follicles. Rudimentary cells were observed in corpus leutium. Many vacuolated spaces were observed in ovarian cortex which is unusual. Significant increase in serum LPO levels and decrease in FSH levels were also observed. After treating the toxic mice with the curcumin restoration of all the parameters to the normal status was observed.

INTRODUCTION: Invention of biocides viz.; pesticides, fungicides and herbicides are considered as boom to the agricultural sector. They play a vital role and have wide applications in both agricultural and commercial pest control. They exhibit a broad spectrum of activity against different arthropod pests of plants and animals. As a result they improve the crop productivity and yield to meet the demands. They fight against disease causing vectors like malaria and prevent sickness that caused by mould food. On the other side pesticides are reported to show deleterious effects by contaminating every layer of ecosystem due to their high potency on non-targeted organism especially human beings either directly or indirectly.

The primary impact of pesticides is on hormonal imbalance and brain development and thereby consequently affects ability to learn. They owe their toxicity to their ability to attack Nervous system by oxidative desulfuration of cholinesterase enzyme 1 as a result neuronal dysfunction takes place and also effects other organs causing eye irritation, skin sensitization, carcinogenicity, Mutagenicity 2, teratogenicity, asthma, infertility 3] and immunosuppressant 4.

Among the organophosphates, chlorpyrifos chemically called as o, o-diethyl O-(3, 5, 6-trichloro-2-pyridyl) phosphorothioate, is one which causes many hepatic and renal dysfunctions. As they are lipophilic in nature their main target is bilayer lipoidal membrane of the cell. CPF cause synoptosomal AChE activity in different parts of brain 5. Organophosphate pesticides are known to alter the activity of Na+/K+-ATPase 6-8, Mg+2 ATPase, Ca+2-ATPase, besides being potent anti-choline esterase compound 9. Morphological changes produced by chlorpyrifos in brain and optic nerve tissues were also reported as well as a neurotoxicant 10.

As they are highly lipophilic in nature their main target is to attack the lipoidal membranes of the biological membranes and produces the reactive oxygen species (ROS) as a result of which oxidative stress is induced which leads to oxidation of lipid membrane and results in its degradation 11. Curcumin analogues are known to be having tumerones modulate anti-inflammatory signaling and cell proliferation signaling 12. Present study aims to unfold the histopathological and biochemical changes of ovary which take place while chlorpyrifos was administered at 10mg/Kg b. wt/day for 14 and 21 days to the Swiss albino mice, as well as to reveal the therapeutic effects of extracted curcumin for 7 days at 100 mg/kg b. wt.

(N= no. of animals in each group); CPF was administered to the mice (Gavage method) successively for 21 days 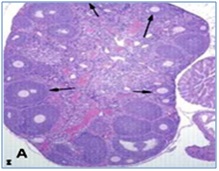 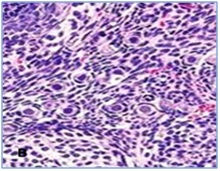 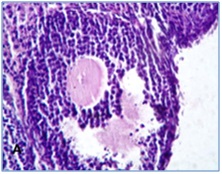 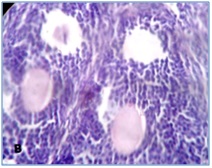 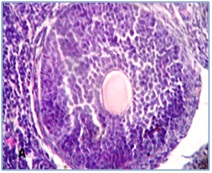 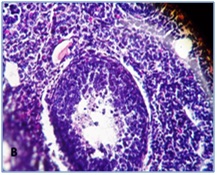 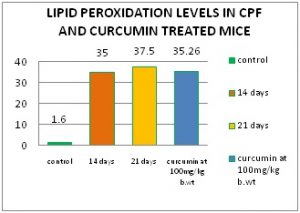 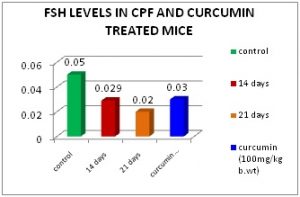 DISCUSSION: The study elucidated by the Sang-Hee Jeong et al., proved the Chlorpyrifos-methyl (CPM) exhibiting weak reproductive toxicity in F0 rats exposed at adulthood and negligible effects in F1 offspring exposed in uterus and via lactation at weanling also relative and absolute ovaries weights were decreased at 100 mg/kg CPM 14. Suleiman F. Ambali et al., worked on CPF and reported that by the administering the CPF in a dose dependent manner and they observed the significant loss in pre-implantation potency which was correlated to the number of Corpus luteum 15, whereas, as per our results the CPF administered mice showed the degeneration in matured graffian follicle with disrupted germinal epithelium, clustered nuclei of granulosa cells.

Reproductive toxicity caused by organophosphates at cellular and molecular level in the ovaries of rats showed significant decrease in the concentration of cytoplasm as well as membrane bound proteins, total lipids, phospholipids and cholesterol 16. Our study revealed there is a degeneration of cytoplasm in graffian follicle. In case of Organochlorine, organophosphate and Carbamates poisoning increased lipid peroxidation, coupled with altered levels of GSH and OFR scavenging enzymes in the blood were observed 17. Some also reported the effect on both CM and CPF on different free radical mediated parameters 18.

Present study revealed that CPF increases the Lipid peroxidation levels in the serum from 1.6 nmol/ml(control) to greater extent to 35 nmol/ml (14 days) and 37.5 nmol/ml (21 days). The highest reduction testosterone of was observed in case of Diazinon-treated rats at 50 ppm (48.3%) followed by chlorpyrifos methyl (55%) and Profenofos (61.6 %). In addition, serum LH and FSH levels in all pesticides-treated rats were significantly decreased with the high concentration only 19. The results in our study quite indicate that even by the administration of CPF at lower concentrations the serum FSH levels were decreased significantly. When the ameliorative effect of curcumin for 7 days was studied, based on the histopathology results of ovary showed the restoration of ova of graffian follicle with continues germinal epithelium which inturn maintains the normal fertility functions confirming that curcumin play significant role against CPF toxicity on Graffian follicle. Curcumin bound iron, but did not block iron uptake or bioavailability in T51B cells given FAC.

However, it reduced cytotoxicity, blocked generation of ROS, and eliminated signaling to cellular stress pathways caused by iron. When they compared these with those of tocopherol, the effects of curcumin also differed from those of α-tocopherol, which did not bind iron and was less effective at blocking iron-stimulated ROS generation 20. During the remedial effect of curcumin to the toxic mice in the present study, the sudden decrease in lipid levels is quite interesting to note (35.26 nmol/ml) which ensures that the curcumin acts as well as retains its antioxidant property effectively even after CPF induced toxic conditions by decreasing the oxidative stress. As per our observations the FSH level was retrieved to some extent by treating the toxic induced mice with curcumin.

CONCLUSION: This is concluded that Chlorpyrifos pesticide causes increased levels of lipid peroxidation and decreased levels of FSH in mice which causes improper ovulation leading to infertility of mice, while curcumin restores FSH levels and LPO levels to greater extent which causing restoration in fertility in mice. Pesticide also causes histopathological alteration through degeneration of germinal epithelium and graffian follicle while curcumin reports normal architecture of graffian follicle and germinal epithelium in mice, which strongly suggests that curcumin play very effective role against pesticidal toxicity and maintains normal histological, hormonal and biochemical parameters in ovary of mice.

ACKNOWLEDGEMENT: It is author’s privilege and gratefulness to thank Mahavir Cancer Sansthan and Research Center for allowing undertaking the work and also for laboratory and infrastructure facilities. Also conveys special thanks and regards to the Director Dr. J.K Singh, H. O. D., Prof A. Nath, Dr. Arun Kumar, and Dr. Mohammad Ali for their guidance throughout. Authors are also thankful to one and all that helped directly and indirectly.