INCIDENCE AND COMPARATIVE ANALYSIS OF ADVERSE DRUG REACTIONS IN DOTS

INCIDENCE AND COMPARATIVE ANALYSIS OF ADVERSE DRUG REACTIONS IN DOTS

INTRODUCTION:  Tuberculosis (TB) an infectious disease caused by Mycobacterium tuberculosis, now become the second leading infectious cause of death in the world. In 2009, there were an estimated 9.4 million incident cases of TB globally that is equivalent to 137 cases per 100000 population. Most of the estimated number of cases in 2009 occurred in Asia (55%) and Africa (30%); 3 smaller proportions of cases occurred in the Eastern Mediterranean Region (7%), the European Region (4%) and the Region of the Americas (3%) 1.

Before the advent of the DOTS programme, high prevalence countries like India had a National TB Programme to combat the Problem of TB. India’s National Tuberculosis Programme (NTP) was started in 1962 (NTP employs a daily regimen of anti-TB drugs) as a truly integrated programme, implemented through District Tuberculosis Centers (DTCs) and peripheral health institutions.

After more than three decades, the NTP has made notable, but not spectacular progress. The overall case finding programmes are about 33% and treatment efficiency is of the same order or worse.

In order to intensify the efforts to control TB, the Government of India gradually replaced NTP by the DOTS strategy/programme in 1993 and it is now known as the Revised National Tuberculosis Programme (RNTCP).

The objective of this revised strategy is to achieve a cure rate of 85% for infections and seriously ill patients through intermittent (three days a week) supervised short course chemotherapy or the directly observed treatment, short course (DOTS).

Under RNTCP, the doses of following first line anti-TB drugs were standardized on the basis of body weight and were given in different regimens. Ethambutol is EMB or E, isoniazid is INH or H, pyrazinamide is PZA or Z, rifampicin is RMP or R and streptomycin is S.

Antitubercular drugs, just like other drugs used in clinical practice, are not free from ADRs. The added problem is that combinations of drugs are always used for prolonged periods of time and therefore, it is likely that the adverse reactions of one drug may be potentiated by the companion drugs used. Moreover, the ADRs to the drugs used are one of the major reasons for the patient default for treatment.

A general knowledge of the various ADRs and their management is essential for the effective management of TB. All antitubercular drugs can cause adverse drug reactions and may result in ADRs involving almost all systems in the body, including the gastrointestinal tract, liver, skin, nervous system, oto-vestibular apparatus and the eyes 2.

Identification of the ADR profile of drugs can be useful for the anticipation, early detection and management of ADRs. Very few studies have been done till date to assess the ADRs of the DOTS regimen. Hence, there is a need to study the safeguard of patients on DOTS through the monitoring of ADRs. Hence, the current study was undertaken.

The result of each paper was carefully observed. The observed ADRs induced by first line drugs were written in table. The observed cases of each ADR were mentioned in the table. In this way the ADRs from all articles were reviewed. The incidence rate of each type of ADR from entire ADRs was analyzed and compared (Table 1). 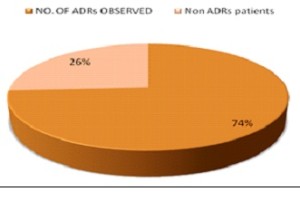 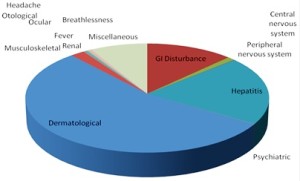 DISCUSSION: Total 10083 patients were studied; out of which 7473 patients show at least one type of ADR. The most common ADR is related to dermatological side effects. The study says that there is need of monitoring DOTS therapy in concern with ADR. Isoniazid, rifampicin, rarely in use of pyrazinamide and ethambutol are the drugs responsible for the skin reactions 1. ADR occurrence in female patients was slightly more in the present study than male patients. Generally, females are considered to be more at risk of ADRs due to their smaller body size and body weight compared to the males & they pass through life stages like pregnancy, menarche etc. which modify the drug response 2, 3. As the number ofdrugs used in regimen increases, the ADRs also increases 6.

Management to ADRs occurrence mostly with add on medication, then followed by withhold the medication regimens, continue without changes and the last is change patient’s treatment regimens. Add on medication such as antiemetic for relieving patient from minor gastrointestinal reactions (nausea or vomiting) and add an antihistamine agent for reducing minor skin reactions. Gastrointestinal disorders are commonly caused by rifampicin can be reduced by restart drugs one at a time every 4 days or begin with drugs that are least likely to cause diarrhea.

Hepatotoxicity is very uncommon in children, mainly shown by isoniazid and rifampicin, isoniazid alone, pyrazinamide alone, rifampicin alone. It can be reduced by starting therapy with ethambutol and pyrazinamide. Arthralgia or gout caused due to pyrazinamide, ethambutol, and isoniazid are managed by Nonsteroidal Anti-inflammatory Drugs (NSAIDs) & colchicines. Neurotoxicity of ethambutol & isoniazid is reduced by discontinuation of the therapy. Sometimes termination of therapy is required to prevent further complications 1.

In management of ADRs, the role of pharmacist is crucial. They are able to lessen the severity of ADRs by growing patient compliance by counselling.

There is need of special care to reduce further complications like hepatotoxicity and death by monitoring of DOTS therapy.

CONCLUSION: Various types of adverse drug reactions were observed in the current study. ADRs were needed to be monitored during DOTS therapy for the prevention of serious harmful effects like death.