ABSTRACT: Background: Influenza and influenza like illness (ILI) is a common respiratory illness among HIV patients. ILI is caused by various respiratory viruses and bacteria other than influenza virus. The symptoms of ILI recover within a few days, but in HIV patients ILI with opportunistic coinfections may lead to serious complications and hospitalization. Objective: To determine the incidence of human rhinovirus (HRV) coinfection with Staphylococcus aureus among HIV patients suffering from flu like illness. Materials and Methods: In this study 92 throat swab samples of flu suspected HIV patients were collected from Department of Immunology, SGPGIMS, Lucknow and ART Centre, RMLIMS, Lucknow, during 2014 - 2015. Samples were cultured on mannitol salt agar (MSA) plates, Staphylococcus aureus were confirmed by the biochemical characterization. The confirmation of HRV was done by RT-PCR. HeLa cell lines were used for isolation of human rhinovirus. Results: The prevalence of HRV was found 17 (18.5%), while S. aureus were isolated from 40 (43.5%) samples.  Coinfection of S. aureus was found in 11 HRV positive samples (64.7%), among them 5 (45.5%) isolates were found high colonizer. Only 2 HRV confirmed samples (11.8%) were found cell culture positive on HeLa cell lines. The significant enhancement in clinical symptoms such as coughing, sore throat and sputum was found during coinfection (P <0.05). Conclusion: The high prevalence of HRV is found in flu suspected HIV patients in this region. S. aureus coinfection is found higher during HRV infection with higher rate of colonization. Respiratory complications were observed significantly increased during coinfection

Deficiencies of both humoral and cellular immunity during HIV infection can potentially alter the course and severity of respiratory infections 2.

In highly active antiretroviral treatment (HAART) era, a significant reduction in respiratory infections has been obtained due to improvement in immunity. Despite of HAART, HIV patients may remain at high risk of severe respiratory infections 3, 4. Influenza or influenza like illness is one of the most common respiratory illness among HIV patients. Common flu symptoms are fever, sputum, sweats, sneezing, sore throat, difficulty in breathing, weakness, etc. The symptoms are self limiting and resolve within a few days, but in immune compromise patients it may cause severe complications 5, 6. ILI is mainly caused by respiratory viruses such as human respiratory syncytial virus, human rhinoviruses (HRVs), adenoviruses, coronaviruses and human parainfluenza viruses 7. HRVs, belong to family picornaviridae are known causes of common cold and flu like illness. In immune compromised patients it may cause serious illness and hospitalization 8, 9.

Various bacteria, such as Streptococcus pneumoniae, Haemophilus influenza and Staphylococcus aureus are commensals in upper respiratory tract, these may cause coinfections or superinfections 10, 11. S. aureus, a common resident of human respiratory tract is known cause of invasive and secondary staphylococcal infection. It also found associated with respiratory viral infections and flu like illness. The emergence of methicilline-resistant S. aureus (MRSA) is a new challenge for the medical world. Development of MRSA pneumonia after a respiratory viral infection is fatal in immune compromised individuals 12.  The bacterial co-infections during respiratory virus illness is a leading cause of morbidity and mortality, especially among immune deficient people 13.

In the HAART era, there is virtually no sufficient information available on the causes, complications and outcomes of respiratory coinfections. The involvement of Staphylococcal coinfection during respiratory viral illness in the HIV infected population remains to be elucidated 3. The aim of this study is to analyze the incidence of human rhinovirus coinfection with Staphylococcus aureus among HIV patients suffering from flu like illness in the Northern India region.

Isolation and Phenotypic Characterization of S. aureus: The swabs were streaked immediately on mannitol salt agar (MSA) plates and incubated at 37 °C for 24 hours. Colonies were counted and further analysis was performed. Gram staining and biochemical tests such as oxidase and catalase were performed for the confirmation of the genus Staphylococcus 14.

Viral RNA Extraction: The viral RNA extraction from swab samples was done by QIAmp® Viral RNA Mini Kit (Qiagen) as per manufacturer’s instructions and extracted RNA were stored at -40oC for further analysis.

Molecular Detection of HRV by Reverse Transcription-polymerase Chain reaction (RT-PCR): RT-PCR for HRV detection was done by one step RT-PCR Kit (AgPath-ID, Life Technologies) using 2 μl of viral RNA as per protocol provided with kit. The primer, Forward 5’-GGGACCAACTACTTTGGGTGTCCG-3’ and reverse primer 5’-CACGGACACCCAAAGTAGT-3’ was used to amplify within specific 5’ non coding region 15. The PCR conditions were as follows- Reverse transcription at 50 °C for 30 minutes, Initial denaturation 95 °C for 10 minutes, followed by 45 cycles of denaturation at 95 °C for 30 seconds, annealing at 53 °C for 30 seconds, and elongation at 72 °C for 45 seconds.

Gel Electrophoresis: Amplified PCR products were loaded on 1.5% agarose gel containing ethidium bromide (EtBr) with gel loading dye and run in TAE buffer at 90 volts. The Products were visualized by the use of ultraviolet illumination unit (Bio-Rad).

Washing (three times) of subconfluent cells was done by Dulbecco’s phosphate buffered saline (PBS) (Sigma) and then PCR confirmed and filtered (0.22 μm filter by Millipore) HRV positive throat swab samples were inoculated in cell lines and incubated for 45 minutes at 35 °C. Cells were washed with PBS, overlaid with 2% MEM, then moved to an incubator (35 °C, 5% CO2), under 5 days observation for confirmation of cytopathic effects (CPE) 16. 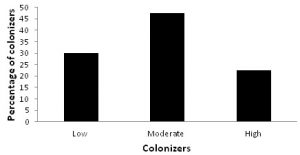 *Chi-squere test was performed to compare the clinical characteristics between single HRV infection and HRV with S. aureus coinfection (p-value <0.05 was considered significant)

DISCUSSION: To the best of our knowledge this is the first study that provides analysis of the prevalence of human rhinovirus infection and its coinfection with Staphylococcus aureus among HIV patients showing flu like symptoms in the North India region. Respiratory coinfections among HIV patients have been well documented previously 11, 17.

found similar to H1N1 Influenza 2009 in immune compromised adults with 12.6 % HRV prevalence, 8  while in the present study the prevalence of HRV is found 18.5%. Another study showed very high prevalence (31.7%) of HRV in South Africa under aged HIV patients hospitalized for lower respiratory tract infections 22. Bacterial-viral coinfection in the same host may lead to high severity and pathology of illness. Superinfections caused by bacteria during respiratory viral infections found associated with significant cause of death 23. In a previous study an increased mortality was observed in coinfection of staphylococcus aureus with Influenza in hospitals of Iowa and Maryland, USA during 2003 - 2009 24.

The association of bacteria and viruses in the pathogenesis of respiratory illness have been well reported in the literatures. The mechanisms of bacteria-virus interactions are very diverse and not well defined 10.

The most common bacteria-virus interaction is found between influenza and Streptococcus pneumoniae 25. However the HRV interactions with various bacteria in nasal epithelium have been studied previously, but the actual mechanisms of HRV and bacteria interactions are still unknown 26, 27.  In our study, 64.7% HRV positive samples were found coinfected with S. aureus, among them 44.5 % were high colonizer, that shows HRV infection enhances colonization of S. aureus in upper respiratory tract.

During coinfection the enhancement in the clinical chracteristics such as coughing, sore throat, sputum was observed. Same evidences of increased severity of complications during respiratory coinfections have been shown in previous studies 23, 28.

CONCLUSION: The study concludes that HRV might be a major cause of flu like illness in HIV patients other than Influenza virus. The RT-PCR method using amplification of 5’NCR region can be applied for the detection of HRV in clinical samples. Cell culture assay using HeLa cell line is not sensitive for HRV isolation. High prevalence of S. aureus is found during HRV infection among HIV patients. HRV infection enhances colonization of S. aureus in upper respiratory tracts. HRV coinfection with S. aureus enhances respiratory complications.

ACKNOWLEDGEMENT: We are thankful to Indian Council of Medical Research for financial supports.