INTRODUCTION:Drug interactions and side effects are the negative but real consequences of pharmacological therapy. The more medications patients take, the greater the potential for drug-drug interactions.

Critically ill, chronically ill and elderly patients are particularly at risk of drug interactions due to polypharmacy as well as impaired homeostatic mechanisms.

Objective: The objectives were to study the incidence and pattern of Drug interaction in our hospital and to identify whether it is associated with Polypharmacy.

MATERIAL AND METHODS: It is a Prospective Observational study using 200 out patient and in patient prescriptions from different departments in a tertiary care hospital.

Prescriptions from Surgical ward as well as OBG ward were excluded as the number of drugs prescribed will be increased in case of surgical prophylaxis.

RESULT AND DISCUSSION: Polypharmacy and assosciated ADRs are well established in older patients since they are more likely to be affected by multiple chronic conditions and multiple uses of drugs. In developing countries like India, there are no stringent regulations about the use of drugs. 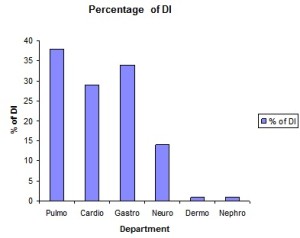 It will reduce the cost of therapy which will ultimately benefit the patient.