ABSTRACT: Molecular effects of androgens on cardiovascular system are variable in nature and are concentration dependent. In spite of the evidences favoring possible involvement of reduced endogenous androgens in the pathogenesis of atherosclerotic vascular disease, there is no certain role of exogenous testosterone supplementation in normal or hypogonadal males to slow down the progression of atherosclerosis. Replacement of testosterone in certain trials resulted in significant reduction in the levels of inflammatory mediators which are considered as important biomarkers in atherosclerosis. Present study aimed mainly to configure firstly the onset of inflammatory markers, dyslipidemia, insulin resistance, endothelial dysfunction (cardiovascular risk factors) as developed in castrated male rats. Secondly the role of testosterone replacement using various dose levels, expressed as low, medium and high respectively. Certain Biomarkers were selected for evaluation and are mainly serum glucose, insulin, lipogram pattern, CRP, IL-6, Endothelin-1 and plasma fibrinogen. Castration of rats and almost testosterone depletion has led to disturbance in glucose metabolism, lipogram pattern, increased inflammatory markers and plasma fibrinogen. Testosterone administration induced evident improvement, specifically more prominent on using medium dose

INTRODUCTION: Androgens have been shown to be important for survival and many studies have concluded that endogenous testosterone levels are inversely related to mortality due to cardiovascular disease (CVD) as well as all causes. Therefore, low testosterone could be a predictive marker for those men at high risk of CVD and the relation between hypogonadism (chronic androgen insufficiency) and increased CVD has been suggested before 1.

Hypogonadism  may  contribute  to development of metabolic syndrome (Mets) which increases CVD risk 2 and  Mets  individuals demonstrates higher glucose, triglycerides (TGs), C-reactive protein (CRP), fibrinogen levels along with decreased high density lipoprotein cholesterol (HDL-C)  level compared with controls and all of which  were related  to increased risk of  CVD 3.

Fifty male wistar rats weighing 170 ± 20 g were used in this study. Animal care was supervised and approved by the local ethical committee. Animals had free access to rat chow and water throughout the study.Experimental design:

Castration was done after anesthetization of rats with sodium pentobarbital (60 mg/kg body weight I.P). Briefly, a small incision was made in the posterior tip of each scrotum sac, then the spermatic cord was tied with 4.0 silk sutures, and the testes were removed. The incision was closed with silk suture. The animals were given i.p injection of 50.000u/kg body weight Penicillin G benzathine and penicillin G procaine in aqueous suspension every 12 hours for 3 days to avoid any infection. The animals were allowed to recover and left for 8 weeks to guarantee serum testosterone depletion.

Castrated rats were randomly subdivided into 4 groups (n=10 rats each). The first group received no drugs, given IM sesame oil, expressed as  castrated control (CC), while the  other 3 groups received IM Testosterone Enanthate (Cidoteston, CID  Co., EGYPT) dissolved in sesame oil at a ratio 1:2 (V/V)  using a dose level of 8, 16 and 24 mg/kg  body weight respectively once a week for 8 weeks.

At the end of the experiment, rats were fasted overnight, blood samples were collected via retro-orbital bleeding and divided into two portions, the first one mixed with sodium citrate as anticoagulant and processed for fibrinogen determination while the other portion was processed for serum preparation. Serum glucose was instantly determined, subsequently the remaining sample was stored at (-20 ̊C) as aliquots for further determination of CRP, interleukin-6 (IL-6), insulin, endothelin-1, free testosterone and lipid profile.

The statistical analyses were performed using Prism 5, Graph pad, CA, USA. The one way ANOVA test was used to evaluate the significance of the differences in parameters studied between groups. When the effect of groups was significant the differences were determined by means of the LSD Post Hoc test. All data are presented as mean ± SEM. Correlations were also determined using the Pearson correlation analysis. Differences were considered statistically significant at p < 0.05. 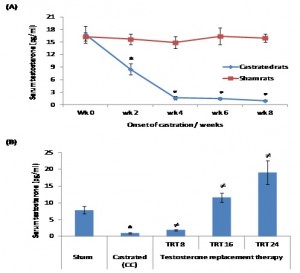 TABLE 1: GLUCOSE AND INSULIN RESISTANCE IN CASTRATED MALE RATS WITH AND WITHOUT TESTOSTERONE REPLACEMENT THERAPY

Castration induced an atherogenic lipid profile typified by lower HDL-C and higher levels of TC, LDL-C and TAG as compared to sham rats. Administration of testosterone replacement therapy, on the other hand, restored these changes in a dose response manner (Table 2).

CRP, IL-6, fibrinogen and endotheline-1 in castrated male rats were significantly (p < 0.05) higher than in sham rats. Testosterone replacement exerted a favourable effect on these parameters in a dose response manner (Fig.2). 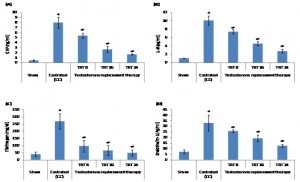 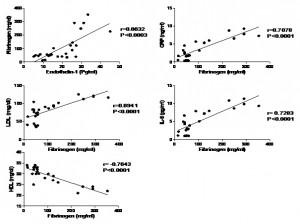 FIG.3: CORRELATION BETWEEN SERUM FIBRINOGEN AND OTHER PARAMETER STUDIED IN SHAM-OPERATED AND CASTRATED RATS WITH OR WITHOUT TREATMENT.

DISCUSSION: Present study demonstrated that castration of rats and almost complete depletion of serum testosterone has led to metabolic disturbance of carbohydrate and lipid profile. Insulin level additionally insulin resistance showed marked increase. These findings are in agreement with previous studies where total testosterone was reported to be inversely related to insulin concentration and its resistance in male individuals. Low testosterone levels are more common in diabetic patients. Clinical hypogonadism, on the other hand, is also associated with type 2 diabetes 6, 21. Kapoor et al 21 reported significant improvements in insulin resistance, fasting  glucose and HbA1c of diabetic  hypogonadal men, treated with testosterone for three months 21.

Those  authors suggested that testosterone treatment reduced triglycerides uptake  by adipocytes due to the inhibitory  activity of testosterone  on lipoprotein lipase enzyme 22. Therefore lower testosterone allows increase activity of lipoprotein lipase inducing increased fatty acid uptake and triglyceride storage in adipocytes along with an increase in fat mass which correlates with increased insulin resistance.  Other potential mechanism is commonly attributed  to the anti-inflammatory  effect of testosterone which suppresses the cytokines, mostly involved in insulin resistance  23.

This is clearly evident in the present study where testosterone administration induced significant decrease in IL-6 and CRP.  Androgen depletion due to castration of adult male rats demonstrated also marked changes in lipid profile where triglycerides, total cholesterol, LDL-c increased while HDL-c decreased as compared to sham groups and in agreement with others 24-27. Many reported studies have characterized the initiation of the pro-atherogenic lipid profile in subsequent to testosterone deficiency 24-26.

Clinical studies illustrated that  that normal men with low testosterone appear to have adverse lipid profile  and hypogonadal men have a potentially atherogenic dyslipidemia 27. On the contrary, few observational /cross-section studies have found no correlation between endogenous androgens and lipid profiles 28, 29.

The therapeutic effect of testosterone on HDL-c has been previously investigated in several studies showing differing results 30-32.  These conflicting findings may be explained by differences in the deposition site of adipose fat or levels of insulin sensitivity among patient groups or by the mode of testosterone administration (physiological versus supra physiological).

Decline of testosterone levels in aging men was attributed to the relative abundance of estradiol increases through increased aromatase activity 33, 34.  This usually leads to a general increase in body fat mass and could also explain the changes in lipid profile of   hypogonadal men.

Clinical observations indicated that estradiol levels have been associated with the amount of circulating cholesterol 35, 36 and higher endogenous estradiol levels in men are associated with a more atherogenic lipoprotein particles profile 37. Animal studies indicated that androgen-receptor deficient models suggest  that testosterone mechanism to elevate HDL-c  may be through  conversion of testosterone to 17-β estradiol via aromatase and the subsequent  activation  of ER α- dependent pathways 38.

CONCLUSION : Castration  of  rats resulted  in propagation  of  many  vascular risk factors like  insulin resistance , inflammatory markers , endothelial dysfunction  and atherogenic  lipid profile . Administration  of various dose  levels of testosterone ,especially  the medium one  resulted  in slow down expression of these risk factors which  reflect  the importance  of  androgens  as  a great  prophylactic  defense in the body.

ACKNOWLEDGEMENTS: The authors acknowledge the support given by the faculty of Pharmacy, Zagazig University for the allowance for using the animal and laboratory facilities.

DECLARATION: The authors declare that there is no conflict of interest that could prejudice the neutrality of the research reported.