ABSTRACT: Urolithiasis is a relevant clinical problem in every day practice with a subsequent burden for the health system. Animal models of disease most closely replicate the sum of physiological conditions present in humans. Rats and mice are however, the two most commonly used experimental animals in medical research including stone disease. The oxalate metabolism in the rat is nearly identical to that in humans in many aspects. The experimental calcium oxalate Urolithiasis in the rat is similar to calcium oxalate stone disease in man. There are many methods of inducing calculi in rats. Among them Chemical method of inducing hyperoxaluria with Ethylene glycol and foreign body implantation especially zinc discs in urinary bladder of rats are the commonly used experiments. This paper will describe in detail about the Zinc disc implantation method to induce calculi in Wistar rats based on a pilot study. Focus is given to the specifications of zinc disc size, duration of calculi formation and X- ray radiography so that it will be very useful for future researchers. This study ensures that a zinc disc of weight of 10 mg is good enough for stone formation with minimal stress to rats. Also X- ray proved to be very effective tool to study the proper implantation and also the growth of the crystal and hence the experimental period can be determined

INTRODUCTION: Urolithiasis   is a relevant clinical problem in every day practice with a subsequent burden for the health system. Urolithiasis is classically explained as the derangement in the process of bio mineralization involving the equilibrium between promoters and inhibitors of crystallization: a deficit of one or several inhibitors or an excess of one or several promoters play a pivotal role in stone formation1.

Urinary stones are composed of non-crystalline phases and of a mixture of several crystalline phases 2. Animal models of disease most closely replicate the sum of physiological conditions present in humans. The environment of an in vitro experiment with isolated cells or cell colonies does not replicate the complex in vivo environment present in living animals. Cells, like people, behave and grow as a function of both genetics and their environment.

The goal of biomedical research is ultimately to help humans, so it is essential to have a non-invasive method to interrogate the biochemical processes to monitor normal and abnormal physiology. Animals and people have individual variability in their biochemistry and genetic makeup, thus have variable response to disease. It is also important to be able to image the process repeatedly, so that changes due to experimental conditions can be observed over time.

A variety of animals including mice, rabbits, rats and pigs have been used to study in vivo the pathogenesis of different types of stones. So far, most investigations have been limited to calcific stone disease using rats and mice. With respect to renal morphology, kidneys of mice, rabbits and rats are unlike those of humans and are unipapillate while those of pigs are similar to those of humans in being multipapillate. Rats and mice are however,the two most commonly used experimental animals in medical research including stone disease 3.

In vivo animal models for Urolithiasis can be broadly classified in to three types namely 4:

Foreign bodies of a variety of substances were implanted in urinary bladder of rats to induce urinary stones. The diet was modified or a lithogen was added to the drinking water to produce a stone of the desired composition. Changing the urinary ambient conditions by administration of Ethylene glycol for 2 weeks at 2 weeks intervals resulted in the formation of urinary stones of mixed composition containing calcium oxalate and struvite. Historically studies have been performed with zinc foreign bodies 5. Implanted foreign body act as a nidus so that the salts get precipitated around it and hence results in stone formation. This paper will describe in detail about the Zinc disc implantation method to induce calculi in Wistar rats based on a pilot study. Focus is given to the specifications of zinc disc size, duration of calculi formation and X- ray radiography so that it will be very useful for future researchers.

Adult male Wistar rats weighing between 200-250gm were selected for the study. The animals were acclimatized to standard laboratory conditions (temperature: 25 ± 2ºC) and maintained on 12 h light and 12 h dark cycle. They were housed in polypropylene cages and provided with regular rat chow (M/s. Provimi Animal Nutrition India Pvt Ltd, Bengaluru) and drinking water ad libitum. The animal care and experimental protocols were in accordance with Institutional Animal Ethical Committee (IAEC) and were cleared by the same, the registration number being 1248/AC/09/CPCSEA – 9/Dec 2013/2.

Zinc plates were procured from local market and made in to a thin film. From that discs of 2mm size were punched and they weighed around 8 – 10mg. Care was taken that the margins of the discs were smooth so that no injury will be produced on the bladder walls when implanted.

Rats were anaesthetized with intraperitoneal Thiopentone sodium (50 mg/kg). A suprapubic incision was made and the abdomen was opened. The urinary bladder was then carefully exposed and the urine in the bladder was aspirated with a sterile syringe. A small nick was made at the apex end of urinary bladder and the sterile zinc disc (previously weighed) was carefully inserted into the bladder. Then the bladder was closed in a single stitch using chromic catgut (4-0). The abdomen was then closed in layers with chromic catgut (3-0) and skin was closed with silk thread. The rats were allowed to recover from anaesthesia. Food and 1% ethylene glycol in water was given ad libitum. The stone was allowed to form and grow inside the bladder for a period of 8 weeks. Then the rats were sacrificed and zinc disc implants/stones were removed from the bladder and dried. Stones taken out were weighed 6-10.

The recovery cage was kept free of particulate bedding and lined with paper towels. To avoid cannibalism and suture chewing by cage mates in the recovery cage, rodents werehoused individually. Postoperative animals were monitored at least once daily until the animal is stabilized. All postsurgical examinations were recorded, including any complications encountered.

Confirmation of implantation and stone formation by radiographs: 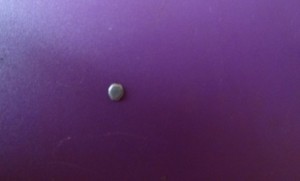 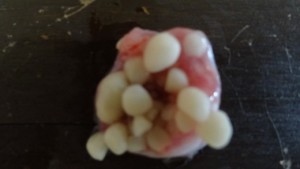 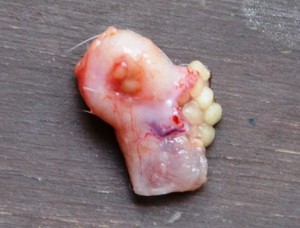 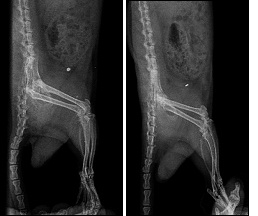 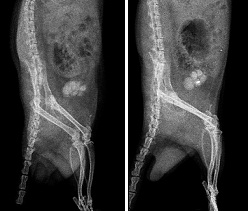 TABLE 2: THE QUALITY OF WATER USED IN THE ANIMAL FACILITY

DISCUSSION: The preclinical evaluation of anti urolithiatic activity of drugs is done by both in vitro and in vivo methods. The in vitro methods used for this purpose simulate the initial events such as nucleation, supersaturation and crystal growth11. The draw back in in vitro methods is that they do not encompass the endogenous urolith inducers/ inhibitors and biological process involved in stone formation in vivo. Hence in vivo animal models are preferred 11, 12. Among the animal models, rats are preferred since there is similarity in the structure and physiology of urinary systems of humans and rats 12.

Vermeulan et al. developed a foreign body model of production of urinary stones 13. Foreign bodies of a variety of substances were implanted in urinary bladder of rats. Implantation of a foreign material like a zinc disc results in deposition of a urolith around the implant. This method is more relevant and better represent the aetiology of the urine stone formation in humans 12. This model is the most widely used model and has been more extensively reported in the scientific literature. This model represents the process of magnesium ammonium phosphate crystal growth 13-15. Ethylene glycol is orally administered after implantation for the development of calcium oxalate stone 12.

Though the model of zinc implantation induced urinary bladder stones is in use since 1950’s, the size of the zinc discs,  the study duration after implantation and the specifications for taking radiographs haven’t been optimized.

From the present study it is well understood that the zinc discs used for implantation should be of minimal size (2mm), weighing not more than 10 mg, with blunt circumference. This size of the disc is the most fitting and minimizes the bladder wall injury and haemorrhage.

The duration of the study needed for the stone formation is 6-8 weeks which is contrary to the work of Singh et al. who has reported that there was sufficient large deposition around implanted discs within 10 days16. The quality of water used in the animal facility should also be taken into account in the formation of stone (Table 2). The use of X-ray examination of formed crystals in rats is suggested by Vargas et al (Fig. 4 & 5)17. X- ray radiography should be used to monitor the growth of deposition around the implants and the study period can be altered according to the desired achievement of stone formation. The study can be terminated accordingly if sufficient amount of deposition is achieved to relieve further stress to animals.

Furthermore, the stone removed can be analysed by FTIR, XRD and SEM methods to strengthen the results between the control and treated groups.

CONCLUSION: From the study it is concluded that zinc disc of size 2mm weighing 10 mg is sufficient to induce stone formation in the urinary bladder of the rats. X-ray provides a supportive evidence to study the formation of the stone. Also the water quality of the animal facility plays an important role in the formation of stone and hence analysis of the same is essential.

ACKNOWLEDGEMENT: We thank the Head of the department and Dr. Shafi, Department of Surgery and Radiology, Madras Veterinary College, Vepery, for helping us in taking the radiographs.