INDUCTION OF CALLOGENESIS AND SHOOTING IN ASTERACANTHA LONGIFOLIA(L.) NEES –A MEDICINAL HERB

INDUCTION OF CALLOGENESIS AND SHOOTING IN ASTERACANTHA LONGIFOLIA(L.) NEES –A MEDICINAL HERB

ABSTRACT: This study is concerned to develop a rapid system for regenerating shoots and callus from mature shoot tip explants of Asteracantha longifolia (L.) Nees, a medicinally important annual herb (family acanthaceae). Effective shoot and callus   regeneration was observed by using several concentrations of cytokinins and auxins with MS medium.  Shoot tips responded better for callusing almost in all combinations such as BA + IAA (1.0+1.0, 1.5+1.0, 1.5+1.5, 2.0+1.5 mg/lit) and BA + NAA (1.0+1.0, 1.5+1.0, 1.5+1.5, 2.0+1.5 mg/lit). Shooting was observed only in shoot tip explants when media was supplemented with growth regulators in different combinations at different concentrations such as BA (0.5, 1.0, 1.5, 2.0 mg/lit) and BA+NAA (1.0+0.5, 1.5+0.5, 1.0+1.0, 1.5+1.0).  However no shooting was observed in MS media by using nodal explants containing different concentrations of BA +NAA + IAA.  This approach of plant tissue culture may proved to be a helpful method to develop a rapid system of regeneration for production of medicinally important products. Also the production of aseptic plants which may decline the over exploitation of plants growing under natural condition.

INTRODUCTION: Asteracantha longifolia Nees is a, medicinal herb belongs to the family acanthaceae. The plant in India is distributed throughout tropical and sub tropical regions and other parts of the world including Burma, Malaya, Nepal and Phillippines, Srilanka and in many other parts of the world. It is usually found in ponds, freshwater swamps and stagnant streams and alongside river beds. Asteracantha longifolia (L.) Nees, finds mention in Ayurvedic treatise like ‘Sushruta Samhita’ and ‘Charak Samhita’ as Rasayan or rejuvenator.

Different parts of plant including leaves, inflorescence, seeds, roots and ashes are diuretic in nature and have been extensively used in the preparation of herbal medicine for various ailments including jaundice, diopesy, rheumatism, hepatic obstructions and dissolutions of gallstones, kidney stones, liver disfunction and diseases of urino-genital tract 1, 2.

The plants were collected from Amravati region and planted in the Departmental garden of of Botany, Sant Gadge Baba Amravati University Amravati.

Murashige and Skoog’s (1962) basal medium was prepared in sterile double distilled water and pH was adjusted to 5.8. After completion of sterilization, the explants inoculated on MS medium with different concentrations and combinations of auxin and cytokinin.

All the standard physical conditions were provided to culture in- vitro. The photoperiod was adjusted as 16 hours light and 8 hours dark, as per the requirement. The culture was kept at 27 ± 20C temperature and 70% humidity.

Maximum callogenic response was seen by using shoot tip explants in different combinations of growth regulators. It was observed that the callus obtained from the shoot tip explants took nearly 20-25 days after inoculation. BA 1.5 mg/ l + NAA 1.5 mg/ l and BA 1.5 mg/ l + IAA 1.5 mg/ l showed better response. Callus obtained from this combination was healthy, yellowish white and fragile, as mentioned in Table 1 and shown in photo plate 1, Fig. A, B. Other combination of BA + IAA and BA + NAA such as (1.0+1.0, 1.5+1.0, 2.0+1.5 mg/lit) also responded better, as mentioned in Table 1.

TABLE 1: RESPONSE OF SHOOT TIP FOR CALLUSING TO DIFFERENT CONCENTRATIONS OF GROWTH REGULATORS SUCH AS BA + NAA, BA + IAA. 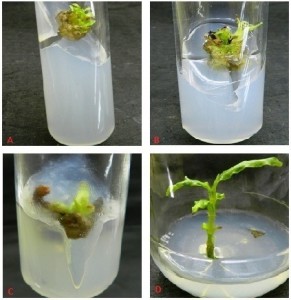 TABLE 2:  RESPONSE OF SHOOT TIP EXPLANTS FOR SHOOTING TO DIFFERENT CONCENTRATIONS OF GROWTH REGULATORS SUCH AS BA, BA + NAA.