ABSTRACT: Lipase is an important of extracellular thermostable enzyme that has received considerable attention for potential use in the food industry. Hence to achieve large scale production of gram positive and negative organism is commercially important lipase enzyme under the fermentation. Lipases are produced by microorganisms such as bacteria and fungi. However, we have focused on bacterial microbial lipases were economically importance of several properties. The present studies of the goals of this paper were isolation and identification of lipase producing bacteria from biogas producing power plant waste volatile substances as sources. Optimization of the experimental conditions for the maximal amount of enzyme production was performed.

INTRODUCTION: Lipases (triacylglycerol acyl hydrolases, EC 3.1.1.3) catalyze the hydrolysis and the synthesis of esters formed from glycerol and long-chain fatty acids. Lipases occur widely in nature, but only microbial lipases are commercially significant. The many applications of lipases include specialty organic syntheses, hydrolysis of fats and oils, modification of fats, flavor enhancement in food processing, resolution of racemic mixtures, and chemical analyses. This article discusses the production, recovery, and use of microbial lipases. Issues of enzyme kinetics, thermostability, and bioactivity are addressed and also productions of recombinant lipases are detailed. Immobilized preparations of lipases are discussed. In view of the increasing understanding of lipases and their many applications in high-value syntheses and as bulk enzymes, these enzymes are having an increasing impact on bioprocessing

There must be three factors to detect a lipase-positive bacterium by culturing it. These factors include (i) growth of the organism, (ii) production of lipase by that organism under suitable growth conditions and (iii) the presence of a sensitive method to detect lipase activity 31. Growth conditions affect the synthesis of lipase by microorganisms. Carbon and nitrogen sources, the presence of activators and inhibitors, incubation temperature, pH, inoculum amount and oxygen tension can influence lipase production 13. The carbon source has been reported as the major factor that affects lipase expression, since lipases are inducible enzymes. The production of these enzymes depends on the presence of a lipid, such as olive oil or any other inducer, such as triacylglycerols, fatty acids and tweens.

In eukaryotes, lipases are involved in various stages of lipid metabolism including fat digestion, absorption, reconstitution, and lipoprotein metabolism. In plants, lipases are found in energy reserve tissues. How lipases and lipids interact at the interface is still not entirely clear and is a subject of intense investigation 3. Because of their wide-ranging significance, lipases remain a subject of intensive study.  Research on lipases is focused particularly on structural characterization, elucidation of mechanism of action, kinetics, sequencing and cloning of lipase genes, and general characterization of performance 1, 4.  In comparison with this effort, relatively little work has been done on development of robust lipase bioreactor systems for commercial use.

Commercially useful lipases are usually obtained from microorganisms that produce a wide variety of extracellular lipases. Many lipases are active in organic solvents where they catalyze a number of useful reactions including esterification 8, 16, 21, 23, 24, 25, 30 transesterification, regioselective acylation of glycols and menthols, and synthesis of peptides 10, 39 and other chemicals1, 4, 5.

Volatile substances were collected in plastic bags from IOT plant at Pudhuchathiram and Tiruchencode in Tamilnadu, India. The isolation of bacterial isolate was carried out by serially diluting the volatile samples in sterile water and subsequently plating on the 1.5% Tributyrin agar base medium containing with Rhodomine B by using the pour plate method.

The effect of initial pH was accessed in the range of 5.0 to 8.0 producing lipase using shake flask cultures. The medium containing 0.5% Olive oil and with Tween 20 induce the lipolytic activity was increased.

The effect of different types of temperature were incubated in bacterial plate by lipase production was tested in  37ºC, 50ºC, and 70ºC while keeping the pH of fermentation media constant along with the optimum concentration of either of 0.5% Olive oil and with Tween 20.

To determine the lipase activity on the basis of olive oil hydrolysis 28. The sample were mixed with 1.0ml of substrate containing 10.0 ml of 10% homogenized olive oil in 10% gum Arabic (Neem), 2ml of 0.6% of CaCl2 solution and 5ml of 0.2mol l1 citrate buffer, pH7.0. The enzyme substrate mixture was incubated on an orbital shaker at 100rpm at 37ºC for 1hr. To stop the reaction mixture, liberated fatty acids were titrated with 0.1mol l-1NaOH. The extracellular lipase enzyme activity was expressed as units (U) per ml of broth.

Volatile substances were collected in plastic bags from IOT plant at Pudhuchathiram and Tiruchencode in Tamilnadu, India. The isolation of bacterial isolate were carried out by serially diluting the volatile samples in sterile water and subsequently plating on the 1.5% Tributyrin agar base medium containing with and without Rhodomine B by using pour plate method (Fig.3). The plates were incubated at 37’Cfor 48-72hrs. and observe for zone formation(Fig.4). A clear zone around the colonies indicates the production of lipase (Cardenas et al, 2001). The lipase positive strains were further purified, grown in nutrient broth at 37’C for 24 hrs and screened for the ability to produce lipase with olive oil, the bacterial isolates L1, L2, L3, L4, L5, L6, L7, L8, L9, L10, and L11. Among them highest lipase activity by different temperature, and pH (Fig 1 and 2) was identified and further studies were carried out by morphological, physiological and biochemical characteristics (Table 1) of the potent lipolytic wild strains were determined by the method described in ‘Berget’s Manual of Determinative Bacteriology’. 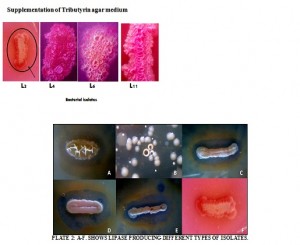 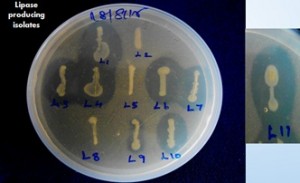 Sugihara et al.(1991) reported lipase production from bacterial isolates in the presence of 1% olive oil in the culture medium. Little enzyme activity was observed in the absence of olive oil even after prolonged cultivation. Glucose, olive oil and Tween 20 were reported to be the best carbohydrate and lipid sources, respectively, for the production of an extracellular lipase by bacterial isolates L1, L3, L4, L6, L7, L9, L10 and L11.  When the two carbon sources were compared, palm oil at a concentration of 2% was found to yield12-fold more lipase than the fructose medium 29. 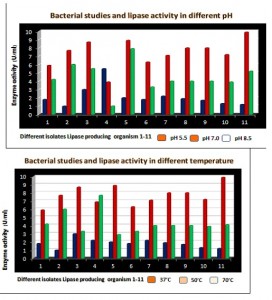 Effect of pH and Temperature:

The enzyme showed optimal activity at 50ºC and pH7.0. The maximum enzymatic activity 7.5U/ml at 8.5pH was found in L5 isolate and compare to L4 isolate was found little less in 0.8U/ml of activity. In contrast, if the temperature increase at 70ºC the enzymatic activity was found high in 7U/ml at L4 isolate and less in L5 yield at 2.5U/ml of enzymes synthesis. Similarly our results were found in the enzyme retained 50% of its original activity after 1-h incubation at 60ºC and 30-min incubation at 70ºC 26.

Lipases are produced by many microorganisms and higher eukaryotes. Most commercially useful lipases are of microbial origin. Some of the lipase producing microorganisms from volatile substances is listed in Table 1.

Isolation and screening of lipase-producing microorganisms:

Lipase producing microorganisms have been found in diverse habitats such as industrial volatile wastes from the bacterial isolates L1, L2, L3,L4, L5, L6, L7, L8, L9, L10, and L11., vegetable oil processing factories, dairies, soil contaminated with oil, oil seeds, and decaying food 36, compost heaps, coal tips, and hot springs 37. However, lipase-producing microorganisms include bacteria, fungi, yeasts, and actinomyces. Simple and reliable methods for detecting lipase activity in microorganisms have been described by Sierra(1957). The formations of opaque zones around the colonies are an indication of lipase production by the organisms. Modification of this as say uses various Tween surfactants in combination with Nile blueorneet’s foot oil and Cu2+ salts. Also, screening of lipase producers on agar plates is frequently done by using Tributyrin as a substrate 7 and clear zones around the colonies indicate the production of lipase. Screening systems make use of chromogenic substrates have also been described 38. Wang et al. (1995) used plates of a modified Rhodamine Bagartoscreen lipase activity in a large number of microorganisms. Other versions of this method have been reported 17, 22.

Types of mediafor development of lipase:

Lipases are produced mostly microorganism by submerged culture 18, buts olid- state fermentation methods 9 can also be used also. Immobilized cell culture has been used in a few cases15. Many studies have been undertaken to define the optimal culture and nutritional requirements for lipase production by submerged culture. The enzyme bacterial lipase production is influenced by the type and concentration of carbon and nitrogen sources, the culture pH, the growth temperature, and the dissolved oxygen concentration 11. Lipid carbon sources seem to be generally essential for obtaining a high lipase yield; however, a few authors have produced good yields in the absence of fats and oils.

Lipases are considered to be the third largest enzyme group, after proteases and carbohydrolases, based on total sales volume. The commercial use of lipases is a billion dollar business which consists of wide variety of different applications (Table 2). Lipolytic enzymes are currently attracting an enormous attention due to their biotechnological potential 12, 19, 27, 32. Lipases are used in two distinct ways: as biological catalysts for producing different products (e.g. food ingredients) and in direct applications, as degreasing agents in leather processing industry, additives to laundry detergent formulation or as potential hydrolyzing

agents for industrially important fats and oils. Lipase scan also be used in esterification, transesterification and interesterificationreactions14, 20. The lipase catalyzed trans esterification in organic solvents are an emerging industrial application, such as the production of cocoa butter equivalent, human milk fat substitute, pharmaceutically very important polyunsaturated fatty acids, rich or low calorie lipids and production of biodiesel from vegetable oil 19. Lipases are also used as laundry detergent and dish washing detergent components. They can reduce the environmental load of detergent products, since they save energy by enabling a lower wash temperature and are biodegradable, leaving no harmful residues. There are many available lipase patents and commercial products for the detergent industry 14. Lipases are extensively used in the dairy industry for hydrolysis of milk fat. Current applications include the flavour enhancement of cheeses, acceleration of cheese ripening and the lipolysis of butter fat and cream. The free fatty acids generated by the action of lipases on milk fat are essential for many dairy products, particularly for softening the cheeses, since these have specific flavor characteristics6,14.

CONCLUSION: Lipases are versatile enzymes that are used widely and are becoming increasingly important in high-value applications in the food industry and the production of fine chemicals. Lipases are capable of region selective and stero selective biotransformation and allow resolution of racemic mixtures. Lipases with improved properties are being produced by natural selection and protein engineering for 16S rRNA study and for further study to enhance usefulness of these enzymes. Simultaneously, advances are being made in bioreactor and reaction technologies for effectively using the lipases. However, the rate of progress is slow lipase-based processing has a promising future; Factors posing limitations include are latively high cost of lipases and a lack of enzymes with the optimal range of catalytic specificities and properties required in the various applications.