Categories Menu
Home » INFLUENCE OF ALLICIN ON PHARMACOKINETICS AND PHARMACODYNAMICS OF PIOGLITAZONE: AN HERB-DRUG INTERACTION STUDY IN RATS

INFLUENCE OF ALLICIN ON PHARMACOKINETICS AND PHARMACODYNAMICS OF PIOGLITAZONE: AN HERB-DRUG INTERACTION STUDY IN RATS

INFLUENCE OF ALLICIN ON PHARMACOKINETICS AND PHARMACODYNAMICS OF PIOGLITAZONE: AN HERB-DRUG INTERACTION STUDY IN RATS

ABSTRACT: Many herbs/phytochemicals are proved to have anti-diabetic properties and patients in the treatment of diabetes increased their usage. Administration of herbs and allopathic drugs has a chance of interaction between them, leading to alterations in pharmacokinetics and pharmacodynamics of the drug. The present study was aimed to know the influence of phytoconstituent (Allicin) on the pharmacokinetic and pharmacodynamic parameters of the drug. Pioglitazone is a thiazolidinedione class of oral anti-diabetic drug which was metabolized by CYP enzymes. The combination of piglitazone with allicin, increases the AUC in normal and diabetic rats. The pharmacodynamic parameter like blood glucose levels of diabetic rats was decreased due to the increase in the bioavailability of the drug. Allicin shows inhibitory action on CYP enzymes and decreases the metabolism of pioglitazone. However, the combination of pioglitazone with allicin alters the metabolism of the drug in diabetic rats and doses of herb-drug were monitored cautiously.

INTRODUCTION: Diabetes is the most common metabolic disorder observed worldwide. It leads to increased sugar levels in blood mainly due to insufficient production of insulin/degradation insulin-producing cells in the pancreas. Many plant products have anti-diabetic properties and knowingly or unknowingly, most diabetic patients are using herbs/phytochemicals and prescribe drugs 1, 2. Due to this study, the effect of herb-drug interactions gains importance and notices whether it is useful or harmful to the patient. Pioglitazone is a thiazolidinedione class of oral anti-diabetic agent

and works by making cells more sensitive to insulin which regulates the glucose levels in the body. Pioglitazone was mainly metabolized by CYP3A4 and CYP2C8 enzymes 3, 4. Long-term usage of pioglitazone showed side effects like cardiac disorders due to over fluid retention in tissues. Allicin is obtained from Allium sativum (Amaryllidaceae), commonly known AS garlic, used in Indian foods regularly, and it has anti-diabetic properties 5. Allicin shows inhibitory action on CYP enzymes, especially CYP3A4, CYP2C8, CYP2C9 and reported in previous studies 6. Knowing the influence of allicin on Pioglitazone is more important; alterations in pharmacokinetic and pharmacodynamic parameters were studied.

MATERIALS AND METHODS: Pioglitazone and Rosiglitazone (internal standard) were obtained AS gift samples from Aurobindo pharma, Hyderabad. Allicin was purchased from yucca enterprises, Mumbai. Streptozocin (STZ) was supplied from Sisco laboratories Mumbai, Methanol and Acetonitrile were HPLC grade supplied from Merck chemicals, Mumbai. All the chemicals used for the study are of analytical grade.

Maintenance of Animals: All animal studies were conducted AS per the procedure approved by the Institutional animal ethical committee, Kakatiya University, Warangal (CPCSEA Reg.no. IAEC/14/UCPSc/KU/2020). Male albino wistar rats weighing 200-250 gm used for the study were purchased from Sainath Agencies, Hyderabad. The animals were housed under standard laboratory conditions (equal proportion of day and night cycle in a day, at ambient temperature and fed with standard rat pellet diet 7. Animals were fasted overnight before experiment with water ad libitum, and during the experiment, they were withdrawn from food and water.

All the operations and analysis of data obtained were controlled by lab solutions software. The mobile phase consists of 25 mM Phosphate buffer (PH adjusted to 3 with orthophosphoric acid, acetonitrile, and methanol in a ratio of 55:37.5:7.5 (v/v/v) 8, 9. The mobile phase was degassed and filtered through a 0.22 µm membrane filter. The flow rate was 1 mL/min, and the effluent was monitored at 269 nm.

Induction of Diabetes in Rats: Diabetes was induced by using streptozocin (55 mg/kg) dissolved in citrate buffer (pH 4.5) to the overnight fasted Wistar rats. After 72 h, blood samples were collected from rats by retro-orbital puncture, and the serum was analyzed for glucose levels 10. Animals with blood glucose levels>250 mg/dL were considered AS diabetic and were used for study 11.

Grouping of Rats and Pk Study: Rats were divided into two groups (n=6). Group, I was administered with pioglitazone (15 mg/kg). Group II was pre-treated with allicin (8 mg/kg) for 7 days and on the 8th day with pioglitazone (15 mg/kg) followed by allicin 5. Through retro-orbital plexus, blood samples were collected using heparinized capillary tubes and the immediately same volume of normal saline was immediately replaced intraperitoneal. The blood was collected at different time intervals of 0.5, 1, 2, 4, 6, 12, and 24 h in each group. Serum was separated after centrifugation at 3000 rpm for 20 min, and the samples were stored at -20 °C until analysis. The pharmacokinetic parameters like Cmax, Tmax, AUC total, t1/2, MRT, Cl, and Vd were calculated.

Grouping of Rats and Pd Study: The STZ induced diabetic rats were fasted overnight and divided into 4 groups (n = 6). The animals of group I (diabetic control, normal saline), group II (Pioglitazone, 15 mg/kg), group III (Allicin, 8 mg/kg) and group IV (Pioglitazone 15 mg/kg + Allicin 8 mg/kg) were treated orally 12, 13. The effect of the Pioglitazone, allicin alone, and in combination on blood glucose level was studied for up to 24 h. Blood samples were drawn from the retro-orbital plexus of the rats at 0 (Initial fasting blood sample), 0.5, 1, 2, 4, 6, 12 and 24 h after the treatment. The samples were analyzed for blood glucose using the glucose oxidase-per oxidase method, and percentage reduction in blood glucose concentrations was determined 8.

Statistical Analysis: The Pharmacokinetic parameters were calculated by using Kinetica TM software (version 4.4.1). All values of pharmacokinetic and pharmacodynamic studies were expressed AS Mean ± SD. The data were statistically evaluated using a one-way analysis of variance (ANOVA). Results were considered to be statistically significant when p ≤ 0.05.

Pharmacokinetics of Pioglitazone In Normal and Diabetic Rats: In normal and diabetic pretreated rats, compared with the group (given Pioglitazone alone), the co-administration of allicin significantly (p<0.01) increases Cmax (1.37 and 1.35 times), AUC total (1.21 and 1.57 times), t1/2 (1.05 and 1.26 times), MRT (1.17 and 1.26 times), whereas, the clearance (1.06 and 1.69 times) and volume of distribution (1.2 and 1.46 times) of Pioglitazone was decreased 14, 15. Maximum time to reach the highest concentration of drug in blood was not changed significantly in both normal and diabetic rats.

Pioglitazone with allicin, increases the pharmacokinetic parameters like Cmax, AUC total, t1/2, MRT and decreased volume of distribution, clearance due to the changes in the metabolism of Pioglitazone by the inhibitory action of allicin on CYP enzymes 16.

TABLE 1: PHARMACOKINETIC PARAMETERS OF PIOGLITAZONE AND PIOGLITAZONE WITH ALLICIN IN DIFFERENT GROUPS OF NORMAL AND STZ-INDUCED DIABETIC RATS

TABLE 2: EFFECT OF PIOGLITAZONE, ALLICIN AND COMBINATION OF BOTH ON BODY WEIGHTS IN STZ - INDUCED DIABETIC RATS (28 DAYS)

Pharmacodynamic Study In Different Groups: During 28 days of the study period, the bodyweight of rats in the diabetic control group (I) was decreased. In the remaining three groups (II, III, and IV) bodyweight was slightly increased. This is mainly due to allicin, pioglitazone and a combination of both having no effect on the degradation of depot fat to maintain the body weight in rats 12. The mean serum glucose level was more in pioglitazone with allicin treated diabetic group when compared with a drug-alone treated diabetic group of rats, and it was showed in Fig. 1. The percentage glucose reduction study of diabetic rats indicates that there is a maximum reduction of glucose level in the combination of Pioglitazone with allicin treated groups (42.3%), when compared with Pioglitazone (35.5%), allicin (25.3%), alone treated groups at the 2nd h, respectively. However, the combination of allicin with Pioglitazone showed a significant decrease (p ≤ 0.001) in glucose levels at different time intervals 17. This is mainly due to the involvement of allicin in the metabolism of pioglitazone, 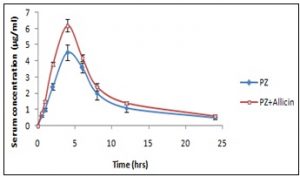 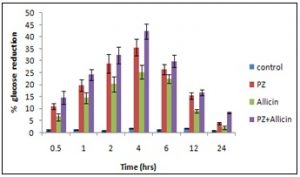 CONCLUSION: From the results, it was concluded that there was an herb-drug interaction was observed when both are given in combination. Allicin decreases the metabolism of Pioglitazone by inhibiting the CYP3A4 and CYP2C8 enzymes and thereby increases the bioavailability of Pioglitazone. However, the interaction was helpful in terms of lowering the blood glucose levels in diabetic rats, and further studies were required to know the interactions in humans.

ACKNOWLEDGEMENT: The authors are thankful to Aurobindo pharma, Hyderabad, India, for providing the gift sample of Pioglitazone.

CONFLICTS OF INTEREST: The authors confirm that this article's content has no conflict of interest.