ABSTRACT: The influence of fluconazole pre-treatment on the hypoglycaemic effect of pioglitazone (10 mg/kg, p.o) and rosiglitazone (720µg/kg, p.o) was studied. This study was conducted on diabetic rats of either sex, randomly distributed into two different groups. Diabetes was induced by administering 120mg/kg of alloxan intraperitonially. Then they were pretreated with fluconazole (36 mg/kg) in 2% w/v gum acacia suspension for seven days. On eighth day, rosiglitazone and pioglitazone were administered to respective groups one hour after fluconazole treatment. Blood samples were collected by retro orbital plexus under light ether anesthesia at different time intervals up to 24 hours. The hypoglycaemic activity of thiazolidinediones was studied and it indicated that fluconazole pretreatment has enhanced the hypoglycaemic effect of pioglitazone and rosiglitazone, at higher dose, significantly. Hence it is suggested that during the concomitant usage of fluconazole and thiazolidinediones, the therapeutic drug monitoring is essential and may also require readjusting the dose and frequency of administration of thiazolidinediones.

INTRODUCTION: Many patients, especially the elderly, are treated continuously with one or more drugs for chronic diseases such as hypertension, diabetes mellitus, heart failure, osteoarthritis, and so on. The potential for drug interactions is therefore, substantial and ‛polypharmacy’ is an important factor to consider when prescribing in this group 1. According to reports, the incidence of interaction ranges up to 20% in patients receiving more than 10 drugs 2. It is the fourth to sixth leading cause for death in United States 3. Diabetes mellitus is a disease characterized by elevated blood glucose levels and requires treatment for lifelong.

Diabetic patients may also be affected with many other diseases like fungal infections, peptic ulcers, hypertension etc. As per the survey, the frequency and incidence of drug-drug interaction ranges from 3 to 5% in the patients taking a few drugs while it is around 20% in patients receiving many drugs 4. There are several patients who are suffering with both diabetes and fungal infection. In such patients anti-fungal agents like fluconazole, itraconazole etc. and thiazolidinediones like rosiglitazone, pioglitazone are administered concomitantly.

There are reports that fluconazole is known to inhibit Cytochrome P-450 enzyme system 5, hence there is a possibility of occurrence of pharmacokinetic type of drug interactions with concomitantly used drugs.  Pioglitazone and rosiglitazone are metabolized by Cytochrome P-450 enzyme system 6, 7. Therefore the present study was conducted in diabetic rats to assess the influence of fluconazole pretreatment on the hypoglycemia induced by thiazolidinediones (rosiglitazone and pioglitazone).

The study was conducted on healthy albino rats (weighing 150-250 gm of either sex). The animals were randomly distributed into two different groups (group I and II), each group consisting of 6 animals. Albino rats were procured from Sri Venkateshwara Enterprises, Bangalore. Prior approval by institutional ethics committee was obtained for conduction of experiments. The animals were kept in colony cages at standard husbandry conditions.

The CPCSEA registration number was 157/1999/CPCSEA.

Preparation of drug for treatment:

Rats of either sex were marked conveniently and randomly distributed into two groups of 6 animals in each group. All the animals were fasted for 12 hours with water ad libitum. The rats were administered with alloxan (120 mg/kg, p.o.). After 24 hours, the blood samples were collected and analyzed for blood glucose level. It was found that diabetes was induced in about 24 hours and was characterized by weight loss and hyperglycaemia. The blood samples were collected and analyzed for four more days for stabilization of blood glucose levels 10, 11.

The animals in group I and II received suspension of pioglitazone 10 mg/kg and rosiglitazone 720mg/kg, respectively, through oral route. On the 7th day, 6 hours after administration of fluconazole, the rats were fasted for 12 hours. On the 8th day, fluconazole was given as usual. One hour after the treatment, pioglitazone 10mg/kg and rosiglitazone 720mg/kg was administered to group I and II respectively. Blood samples were collected thereafter at different time intervals up to 24 hours and glucose levels were estimated. The % blood glucose reduction at various time intervals was calculated and compiled in Table 1.

TABLE 1: PERCENTAGE BLOOD GLUCOSE REDUCTION WITH PIOGLITAZONE IN DIABETIC RATS BEFORE AND AFTER FLUCONAZOLE (36 mg/kg) TREATMENT

The influence of fluconazole pre-treatment on thiazolidinediones (pioglitazone and rosiglitazone) under pathophysiological condition i.e. experimentally induced diabetes in albino rats was studied.  It is evident from Table 1 that, pre-treatment with fluconazole (36 mg/kg for seven days) has not significantly altered the onset of action, but significantly enhanced the duration of action and peak hypoglycaemia induced by pioglitazone. It seems there is an increase in duration of hypoglycaemia. The results are graphically shown in Fig.1. 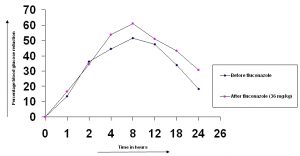 It is evident from Table 2 that, pre-treatment with fluconazole (36 mg/kg for seven days) has not significantly altered the onset of action and duration of action but significantly enhanced the peak hypoglycaemia induced by rosiglitazone.

TABLE 2: PERCENTAGE BLOOD GLUCOSE REDUCTION WITH ROSIGLITAZONE IN DIABETIC RATS BEFORE AND AFTER FLUCONAZOLE (36 mg/kg) TREATMENT

It seems there is no increase in duration of hypoglycaemia. The results are graphically shown in Fig. 2. 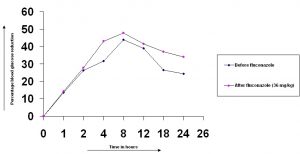 DISCUSSION: Diabetes mellitus is a chronic metabolic disorder which requires treatment for lifelong. The patients suffering from diabetes mellitus are more prone to fungal infections. In such cases thiazolidinediones and antifungal agents like fluconazole are needed to be administered simultaneously. In such situations, there is a possibility of drug interactions. There are reports that thiazolidinediones are metabolized by CYP3A4, CYP2C8 and CYP2C9 12, 13. Reports also indicate that fluconazole is an inhibitor of CYP3A4, CYP2C9, CYP2C19 14, 15. In our study, diabetes was induced into the rats by alloxan (120 mg/kg i. p). The animals showing stabilized blood glucose levels of 200 mg/dl were used in this phase. These diabetic animals were treated with pioglitazone (10 mg/kg) and rosiglitazone (720 mg/kg) and the pharmacokinetics of hypoglycaemia induced by them were established. Then fluconazole (36 mg/kg) pretreatment was given as usual for one week. On the 8th day again pioglitazone and rosiglitazone were administered and blood glucose levels were estimated at regular intervals. In these experiments also, it was found that fluconazole pretreatment enhanced the duration of hypoglycaemia (>22 hours) and peak hypoglycaemia (60.93% ± 0.32 and 47.84% ± 0.60) of thiazolidinediones.

DM is now the leading cause of many serious complications such as cardiovascular, renal and other serious comorbidities 16. The distinctive properties of DM are chronic hyperglycemia, microvascular (eg. retinopathy, nephropathy and neuropathy) as well as the macrovascular (eg. coronary artery disease (CAD), hypertension (HT), atherosclerosis and stroke) pathologies with more than 17.5 million deaths globally which furthermore attributable to cardiovascular complications 17. Therefore we can say that even in pathophysiological conditions there is an inhibition of metabolism of thiazolidinediones by fluconazole pretreatment.  A higher dose of fluconazole (36 mg/kg) was required to significantly enhance the rosiglitazone induced hypoglycaemia.  However our results are yet to be confirmed by conducting the experiments to verify the influence of fluconazole pretreatment on the pharmacokinetic parameters (Half-life, volume of distribution, renal clearance, absorption co-efficient, etc...) of thiazolidinediones.

ACKNOWLEDGEMENT: We are thankful to Sri. Sha. Bra. Chandramouliswara Swamiji, President T.M.A.E Society for his constant support and providing all the facilities to carry out this research work. We are also thankful to Micro Labs Ltd., Bangalore for providing pioglitazone and rosiglitazone as gift samples. We also wish to thank Loba Chemical and IPCA Labs Ltd. Mumbai, for providing alloxan and fluconazole, respectively, as gift samples.

CONFLICT OF INTEREST: All authors have no conflict of interest.