INTRODUCTION: Oral route of administration has been received more attention in the pharmaceutical field  because  of  the  more  flexibility in the  designing of  dosage  form  than  drug delivery design for other  routes 1. In pharmaceutical CRDDS, matrix based systems are the most commonly used type of release controlling methodology owing to their simple manufacturing process, level of reproducibility, stability of the raw materials and dosage forms as well as ease of up operation and also resistant to dose dumping. These systems improve patient compliance and decreased adverse drug reactions 2.

Natural gums are promising biodegradable polymeric materials. The fact for increase in importance of natural plant based material is that plant resources are renewable and if cultivated or harvested in a sustainable manner, they can provide a constant supply of raw materials 3. Many natural polymeric materials have been successfully used in sustained-release tablets.

Their main use is in the manufacture of paper or wood varnishes and lacquers, particularly as a varnish for the fine art, and some paints.

It is a water- resistant coating, sometimes also used for its glazing functionality, and found in the indigenous system of medicine 4. A few works were reported on gum dammar using it as a matrixing agent for sustained release 5, 6.

Diclofenac sodium is one of the potential NSAIDS which is commonly used as an anti-inflammatory, analgesic and anti-pyretic. It is used for the long term symptomatic treatment of several alignments such as osteoporosis, rheumatoid arthritis, ankylosing spondolitis. Diclofenac is rapidly and completely absorbed after oral administration and peak plasma concentration is reached within 2-3 hr. it undergoes extensive first pass metabolism; hence only 50% of Diclofenac is available systemically. Its half-life in plasma is 1-2 hr. It is also used for acute musculo skeletal injury, acute painful shoulder post-operative pain; dysmenorrheal 7-9. From several investigations, it was found that diclofenac sodium was feasible for the development of sustained release formulation.

MATERIALS: Diclofenac is obtained as a gift sample from Hetero Drugs, Hyderabad. Gum Damar (GD) is procured from Girijan co-operastive corporation, Vizag.  All other ingredients are of analytical grade.

Preparation of Matrix Tablets: Diclofenac sodium matrix tablets were prepared by wet granulation method. Diclofenac sodium (100mg) was blended with appropriate quantities of GD (5%, 10% and 15%) and diluents (lactose, starch and MCC). This Premix blend was wet granulated with 3% w/v solution of PVP K-90. The wet mass was passed through No.10 sieve. The wet granules were air dried at for 1 hour and the dried granules were sieved through No. 16 sieve.

The granules were dried and passed through mesh no: 16. Granules were evaluated for angle of repose bulk density (BD) and tapped density (TD). Carr’s index (CI) and Hausner’s ratio were calculated using following equations 10 after evaluation These granules were blended with lubricating agents (1% w/w magnesium stearate and 1% w/w talc) and compressed using 16 station rotary punching machine, equipped with flat-faced, round punches of 8-mm diameter.

Composition of the matrix tablets and the pre compression parameters of the granules were given in the Table 1 and 2 respectively.

All the ingredients in the formulations are mentioned in mg/tablet

Experimental Design: A 32 factorial design was employed to study the effect of the gum and their concentration on the release rate of diclofenac sodium matrix tablets. The levels of the two factors were selected on the basis of the preliminary studies carried out before implementing the factorial design.  The percent of drug release in 3rd h (Q3), 6th h (Q6), 9th h (Q9), time to release 50% drug (t50%)  and zero order rate constant (K0)  were taken as response variables. The factors, levels and the experimental runs with their factors combination were given in Table 3 and 4 respectively.

The response surface graphs and mathematical models were obtained from DOE software.

TABLE 3: FACTORS AND LEVELS OF THE EXPERIMENTAL DESIGN

TABLE 4: DISSOLUTION CHARACTERISTICS OF FORMULATIONS IN A 32 FULL FACTORIAL DESIGN

Drug Release Studies: The in vitro   drug release studies  were assessed by USP type II dissolution apparatus  (paddle method) at 50 rpm in 900 ml of  0.1N HCl for first 2 hours and the phosphate buffer pH 6.8 from 3 to 10 hours, maintained at 37°C ± 0.5°C.  An aliquot (5ml) was withdrawn at specific time intervals and replaced with the same volume of pre warmed (37°C ± 0.5°C) fresh dissolution medium.

The samples withdrawn were filtered through Whatman filter paper (No.1) and drug content in each sample was analyzed by UV-visible spectrophotometer at 276 nm. The dissolution studies were carried out in triplicate. The amount of drug present in the sample was calculated with the help of appropriate calibration curve constructed from reference standards.

Release Kinetics: To analyze the mechanism of drug release from the matrix tablets, the release data was fitted into various mathematical models viz., Zero order, first order and Higuchi equation 13. The dissolution data was also fitted to the well-known experimental equation (Koresmeyer’s Peppas equation), which is often used to describe the drug release behavior from polymer systems 14.

To clarify the release exponent for the different batches of matrix tablets, the log value of %drug was plotted against log time for each batch according to the equation 4. A value of n=0.45 indicates Fickian (case I) release; >0.45 but <0.85 for non Fickian (anomalous) release; > 0.89 indicates super case II type of release. Case II gradually refers to the erosion of the polymeric chain and anomalous transport (non- Fickian) refers to a combination of both diffusion and erosion controlled drug release 15. Mean dissolution time (MDI) was calculated for dissolution data using the following equation 16.

Experimental Design Data Analysis: The effect of formulation variables on the response variables were statically evaluated using a commercially available software package design of Experiments® 8.0 (design expert).  The fitting of an empirical polynomial equation to the experimental results facilitates the evaluation of the responses. The general polynomial equation is as follows:

Where Y is the dependent variable, b0 is the arithmetic mean response on nine runs and b1 is the estimated coefficient for factor X1. The main effects (X1, X2) represent the average values of changing one factor at a time from its low to high value. The interaction terms (X1X2) show how the response changes when two factors are changed simultaneously.

The polynomial terms (X12 and X22) are included to investigate nonlinearity.

RESULTS AND DISCUSSIONS: The granules of diclofenac sodium matrix tablets were prepared by wet granulation method according to the formula given in Table 1. The formulation blends were characterized with respect to angle of repose, BD and TD. The angle of repose was less than 29° indicates satisfactory flow behavior. Physical characteristics of the prepared granules were given in Table 2.

The matrix tablets were evaluated for hardness, friability, content uniformity, uniformity of weigh, tensile strength and in vitro drug release studies. The hardness of the tablets in all the batches was found to be in the range of 6.46 – 7.33 Kg/cm2. The friability of all the formulations was less than 1%.

In vitro release data obtained from formulations prepared were fitted to multiple   linear   regression analysis. The factors selected are concentration the gum (5%, 10% and 15%) and type of diluent (lactose, starch and MCC). The responses selected are drug release at 3rd h (Q3), 6thh (Q6), 9th h (Q9), t50% and K0. Mathematical   relationships   generated   using   multiple   linear   regression   analysis (MLRA) for the studied response variables are expressed as Equations and were given below. The regression coefficients are given in Table 7.

Positive sign before a factor in polynomial equations represents that the response increases with the factor, while a negative sign means the response and factors have reciprocal relation.

From the equations it was quite clear that the release of drug from matrix tablets had negative effect on the concentration of the gum (X1) and positive effect on the type of diluent (X2). The results indicated that Q3 is mainly based upon the X1 compared to X2. The release of drug in 6h, 9h and t50% mainly based upon the X2 compared to X1 and zero order rate constant depends on the both independent variables.  It is indicating that the release of the drug from the dosage form initially depends upon concentration of gum and finally on type of diluent.

The quadratic models generated by regression analysis were used to construct 3D response surface plots in which rsponse parameter was generated by a curvature surface as a function of independent variable. Figure 2(A – E) show the effect of the two factors on the drug release at 3h, 6h and 9h, t50% and K0. Fig. 2 depicts a curvilinear relationship for the responses. This can be attributed to the potential occurrence of interaction between the two independent variables at the corresponding factor levels, construing that each independent variable is tending to modify the effect of another towards the release of diclofenac sodium.

TABLE 7: SUMMARY OF THE REGRESSION OUTPUT OF SIGNIFICANT FACTORS FOR THE MEASURED RESPONSES

TABLE 8: ANALYSIS OF VARIANCE FOR DEPENDENT VARIABLES IN FACTORIAL DESIGN 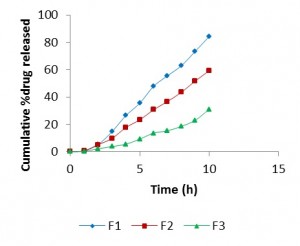 FIGURE 1A: IN VITRO RELEASE PROFILE OF MATRIX TABLETS CONTAINING LACTOSE AS DILUENT 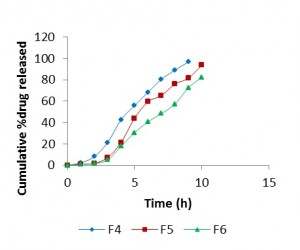 FIGURE 1B: IN VITRO RELEASE PROFILE OF MATRIX TABLETS CONTAINING STARCH AS DILUENT 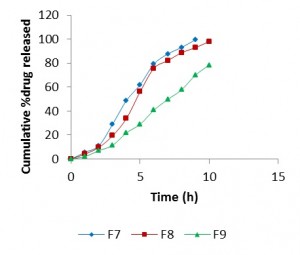 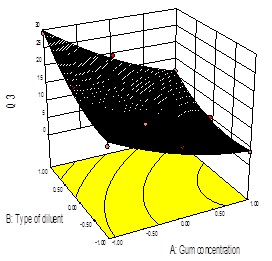 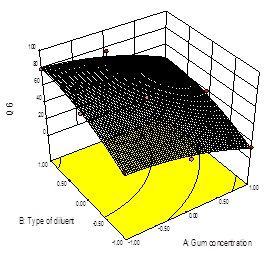 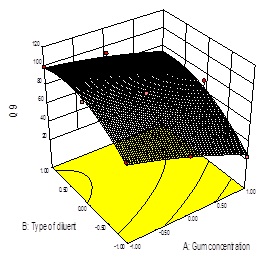 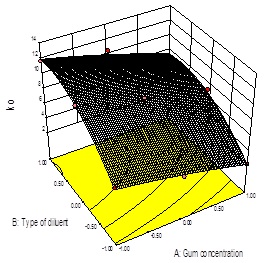 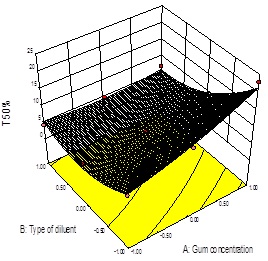 CONCLUSION: Study indicates that release of diclofenac sodium from gum dammar based matrix tablets highly depends on type of diluent along with the concentration of the gum. However, in developing SR formulations with gum damar containing DS, it has been shown that higher release rates are observed with matrix tablets containing MCC as diluent whereas lactose with gum damar provides a better result. In addition, better results have been seen with higher concentrations of gum with starch and MCC. The calculated release exponents (n values) and rate constants (K values) indicated the release behavior of all the formulations was super case II transport mechanism with zero order kinetics. Response surface methodology was an important tool for understanding the change of responses and effect of formulation variables.

ACKNOWLEDGEMENTS: The authors are thankful to Chalapathi Institute of Pharmaceutical Sciences for providing facilities for bringing out this work.