Faculty of Pharmacy, The Islamia University of Bahawalpur 3, Bahawalpur, Pakistan

ABSTRACT: Metoprolol tartrate (MT) is cardio-selective β1 receptor antagonist used primarily in the management of chronic heart diseases like in the management of hypertension, angina pectoris, cardiac arrhythmias, myocardial infarction and heart failure. It is only available as prescription drug. The objective of this study was to prepare sustained release matrix tablets of MT using hydrophilic polymer and direct compression technique. Major emphasis was given to the effect of independent variable mainly the concentration of Magnesium stearate (MS) and Talcum (T) used as lubricants. Dependent variables characterized in this study are weight variation, hardness of tablet, thickness, friability and dissolution profile of tablet. Increasing concentration of lubricants was having profound effect on release kinetics of drug and friability of tablet. Model dependent release behavior of matrix tablets was investigated applying different models, all formulations were a good fit to zero order release kinetics model. Thorough investigation of independent variables and their effect on dependent variables guided towards best formulation of all the manufactured batches. Formulation F3 was selected as best formulation.

INTRODUCTION:Therapeutic efficacy of drug is some times more important than its potency to achieve appropriate plasma drug levels to remain within the safe window. Conventional oral dosage forms produce fluctuations of drug plasma level and effectiveness of drug is compromised.

For chronic disease to enhance patient compliance it is necessary to maintain plasma levels within a safe and effective range.

An extended release drug delivery system designed using different matrix is the release system, which prolongs and controls the release of drug that is modified, dissolved or dispersed. A hydrophilic matrix tablet is the method of fabricating an extended release (ER) or sustained release (SR) solid oral dosage form. Matrix system differs from reservoir or other SR systems in a way that chosen water-swellable polymer and drug(s) are homogeneously blended together with other pertinent excipients like fillers, binders, glidant and lubricants. Premeditated concentration of suitable plasticizer may be added to avoid rigidity of polymer networking, this will enhance stability of the formulation. Formulation of matrix tablets is similar to conventional tablet i.e. all steps such as granulation, mixing, compression and coating. Wide range of manufacturing methods is available to choose and direct compression method is used as it is less time consuming.

Hydrophilic polymer such as Hydroxypropyl methylcellulose (HPMC) is commonly used as matrix former for extended release tablets because it works at acidic, transient and alkaline pH with same effect. Drug release from delivery system is controlled through swelling and erosion of polymer 1. In direct compression method HPMC-15 cps is suitable matrix former 2, 3. Fast gel formation ability of Hydroxypropyl methylcellulose also makes it good excipient in the manufacturing of matrix tablets 4. Highly water soluble drugs are not easy candidates to be formulated as extended release delivery systems. Dose dumping leading to toxic effects are serious consequences which can appear subsequent to dose administration. But this challenging job is accomplished by choosing suitable drug release retardants.

Metoprolol   is a cardio-selective beta-blocking agent and it is used in the management of hypertension, angina pectoris, cardiac arrhythmias, myocardial infarction and heart failure 5. The half-life of metoprolol is stated to 3-4 hours, its bioavailability through oral route is only 50% 6. Hence, multiple daily dosing is required which compel scientists to convert metoprolol tartrate into extended release dosage form. It is a white crystalline powder with high aqueous solubility and high permeability throughout gastrointestinal tract 7.

The objective of this study was to observe impact of different concentrations of lubricants (magnesium stearate, talcum) on release characteristics of metoprolol tartrate matrix tablets.

With concentration 1-3.5% MS acts as dissolution retardant 8. However physical properties of tablets like tensile strength, friability and flowability of powder are inadequately effected using higher ratio of MS 9, 10.

The presence of an insoluble diluent exerts an influence on nearly all the physical parameters and dissolution profile of hydrophilic matrices of metoprolol tartrate the effect is greater when ethyl derivatives of cellulose polymer were used 11. Extended release matrix tablet formulation of MT was based on the hydrophilic matrix. Direct compression methodology was employed as it is less time taking and more suited for future stability of the product.

Four batches of tablets were produced, using hydroxypropyl methylcellulose to get appropriate tortuosity, used in (25.26% approx.) concentration and keeping it constant for all batches.  In formulation of matrix tablets, used different types of diluents (microcrystalline cellulose, magnesium stearate, talcum), in order to ensure a prolonged release of medicament. Four formulations with 100 mg of metoprolol tartrate were developed (Table 1). The purpose of the formulations was to attain a randomly mixed physical mass with appropriate directly compressible properties to ensure proper flow by using combined effect of lubricants.

For MT tablet formulations different materials were weighed and then subjected to subsequent treatment. Milling, drying and mixing was done using pilot scale equipments. Moisture contents in all the ingredients were set at optimum level as high moisture content do affect the transfer of force from upper punch to lower punch 12. MT and hydroxypropyl methylcellulose were mixed geometrically for 15 minutes for each formulation to get randomization, in the next step micro-crystalline cellulose was added and mixed thoroughly. Blended materials of all the batches were sieved through sieve #20. Magnesium stearate and Talcum added as lubricants as last step. A small cylindrical mixer of 150 gm capacity was manually used for mixing and lubrication of all four formulations. 150gm batch size was set for each formulation.

Compression process for experimental batches F1, F2, F3 and F4 was carried out using TDP-1 bench top single punch machine which can produce tablets of size (diameter) 3mm-13mm. The determination of the release of metoprolol tartrate from the matrix tablets was carried out using the USP apparatus II, Pharma Test according to USP 28 13. The test was performed in 900 ml of phosphate buffer (pH 6.8) with temperature maintained at 37°C ±0.5°C while the apparatus was set at 100 rpm. Samples of 5 ml were collected at 0, 1, 2, 3, 4, 6, 8, 10 and 12 hours and amount of sample withdrawn was immediately replaced with equivalent quantity of fresh medium maintained at same temperature. Suitably diluted samples were analyzed at 275 nm using UV-VIS Spectrophoto-meter.  Six tablets for each batch were exposed for dissolution and mean was plotted versus time point.

RESULTS AND DISCUSSIONS: Tablets produced for all four batches were subjected to physical analysis. Evaluated organoleptically   tablets have slightly off whitish   color,  smooth  surface and round shape, a 10 mm diameter, 475 mg weight and active content of 100 mg  metoprolol tartrate.

Pertinent laboratory test to predict in vivo behavior of drug delivery system was applied to investigate release pattern of drug from all batches.  Results of this test reveal    that the dissolution is influenced by the type of diluents in the matrix. The release pattern (dissolution) of metoprolol tartrate from matrix tablets containing varying ratios of MS and T is different as given in Figures 1, 2 and 3 respectively. Physical properties and dissolution behavior of drug from matrix tablets with low concentration of lubricants (magnesium stearate, talcum) and those with higher concentration of lubricants are reasonably different as indicated in release profile graphs. 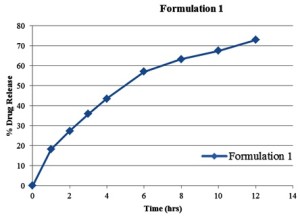 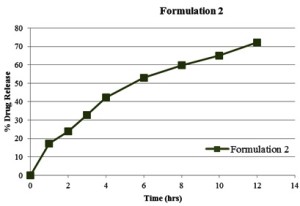 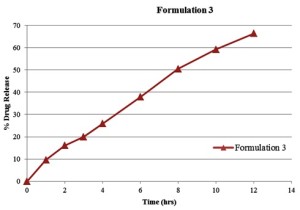 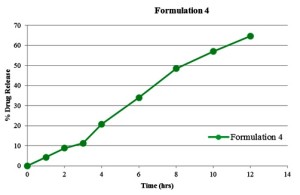 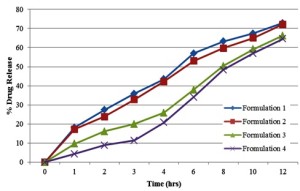 FIGURE 3: ZERO ORDER RELEASE, THE INFLUENCE OF DIFFERENT RATIOS OF MAGNESIUM STEARATE AND TALCUM ON THE IN VITRO DISSOLUTION PROFILES OF METOPROLOL TARTRATE F1­F4

CONCLUSIONS: Release data of metoprolol tartrate was fitted to zero-order, first-order, Higuchi model and Korsemeyer-Peppas model. Best fit was zero-order release kinetics. MS and T due to non-wetting nature retard penetration of menstruum to tablet when used in more than 3% concentration consequently it effects consolidative properties of compressed mass apparent in decreased hardness of formulations F3-F4. Erosional drug release is predominant with little diffusion at high concentration of MS and T. Result drawn are amazingly interesting leading to dual conclusion i.e. an optimum ratio of MS and T can be employed as release retardant materials for extended release of drugs alternative to costly polymers, if not given emphasis MS and T pose serious issues with physical parameters of the tablets, reduced hardness, increased friability and bad texture of tablets.