ABSTRACT: Objective: The objective was to study drug-drug interaction between Lornoxicam and oral hypoglycemic agents in normal and Streptozotocin-induced diabetes in rats. Material and Method: The protocol was blueprinted in two phases. In the first segment, the influence of Glibenclamide (0.7mg/kg/p.o.) and Glipizide (1.05mg/kg/p.o.) once daily on blood glucose levels in normoglycemic rats were studied and then the influence of Lornoxicam (1.64 mg/kg/p.o. once daily) pre-treatment on the hypoglycemic activity studied. Along with, the influence of Lornoxicam treatment for seven consecutive days (per se effect) on blood glucose levels was also studied in normoglycemic rats. In the second phase of the study, Streptozotocin-induced diabetic rats were used to assess the influence of Lornoxicam pre-treatment on Glibenclamide and Glipizide induced hypoglycemic effect in pathophysiological conditions. Blood samples were collected at accepted hiatus of 0.0, 0.5, 1.0, 2.0, 4.0, 8.0, 12.0, 18.0 and 24.0 h subsequent to drug treatment. All blood samples were evaluated for plasma glucose by the glucose oxidase peroxidase method (GOD/POD). Results: The findings suggested that Lornoxicam influences the hypoglycemic action of Glibenclamide and Glipizide at pharmacokinetic levels, both in normoglycemic and diabetic rats respectively. Conclusion: The findings indicate that the dose of oral hypoglycemic agents should be adjusted if there is a need for co-administration of Lornoxicam.

INTRODUCTION: Arthritis is the second most frequently reported chronic condition in the United States as well as over the world 1. The community diagnosed with diabetes is nearly twice as likely to have arthritis, and the idleness caused by arthritis gets in the way of successfully managing both the diseases 2.

American Diabetes Association and Arthritis Foundation divulged that “about 53% of people with diabetes have arthritis. Raised levels of systemic inflammation have been shown to predispose to developing type II diabetes mellitus (DM) 3. However, there are tantalizing links between the two diseases, but at this point, they are mainly speculative 4.

Diabetes may pose severely incapacitating or fatal complications. The metabolic consequences of prolonged uncontrolled hyperglycemia lead to vascular disease, chronic nephritic ailments, amputations, blindness, and many more. Diabetes mellitus (DM) characterized by chronic as well as the persistent altitude of circulating glucose concentration resulting from defective insulin secretion by β-cells of islets of Langerhans 5. In recent years, developed nations have witnessed a hotheaded augmentation in the pervasiveness of DM principally due to lifestyle transformations and the resulting surge in obesity.

When it comes to Rheumatoid arthritis (RI), which is typified as importunate synovitis, systemic inflammation, and auto-antibodies (particularly to rheumatoid factor & citrullinated peptide) most likely affecting women and elderly people 6, uncontrolled active RI causes joint smash-up, disability, decreased eminence of existence, and cardiovascular and other co-morbidities.

Analgesics and non-steroidal anti-inflammatory drugs (NSAIDs) lessen pain and stiffness with the ability to control symptoms of rheumatoid arthritis. Substantiation for the use of analgesics is modest but uncontroversial; 7 supports for the use of NSAIDs is considerably stronger 8. NSAIDs have lost their historical role as a first-line treatment due to its concerns about limited effectiveness, inability to modify the long-term course of disease along with gastrointestinal and cardiac adverse effects 9.

In clinical situations, arthritis and diabetes may transpire in a solitary patient and necessitate treatment for both concurrently. To maintain tight glycemic control, oral anti-diabetic agents like sulfonylureas are required, while to condense the pain and inflammation allied with arthritis, appropriate NSAIDs have to be used.

It is not for eternity factual that the repercussions due to co-administered drugs are harmful or fatal; but, a collision cannot be ignored since a considerable number of co-administered drugs alter the glycemic regulation accomplished due to a meticulous oral hypoglycemic therapy. Hence, keeping in mind the safety of the diabetic patient, it is noticeable to have exact information on glycemic regulation of frequently prescribed oral hypo-glycemic agents such as glipizide and gliben-clamide in normal and Streptozotocin-induced diabetic rats.

Experimental Animals: Healthy Wistar Albino rats of either sex weighing between 150-250 gm were procured from the central animal house of an institution. The animals were housed in polypropylene cages and allowed to acclimatize for 7 days. Animals were maintained under standard husbandry conditions of 12:12 h light: dark cycle at a temperature of 24± 2°C and relative humidity of 30-70% with water ad libitum and fed with standard laboratory pellet diet. All the animal handling and blood withdrawal techniques were carried out following the (CPCSEA) guidelines with IAEC Regd. No. 1546/PO/a/11/CPCSEA.

Induction of Diabetes: Streptozotocin was dissolved in citrate buffer (0.1 M, pH 4.5) and administered to overnight fasted experimental animals at a dose of 65 mg/kg i.p. After 24 hours, blood samples were collected for determination of fasting glucose concentration. The rats with blood glucose levels above 350 mg/dL were considered to be diabetic and were used in experiment 11.

Sample Collection: All samples were collected by tail vein method 12 at time intervals (0, 0.5, 1, 2, 4, 8, 12, 18, and 24 hours) and centrifuged for 10 minutes at 5000 rpm, decanting supernatant fluid into the clean, dry test tube. Blood glucose level was estimated with the help of the GOD/POD method using Erba Mannheim chem-5 plus V2 autoanalyzer 13.

(ii) Effect of Lornoxicam pre-treatment on the hypoglycemic activity of Glipizide and Gliben-clamide in normal albino rats: In the first part, the healthy rats of either sex (n=6) were divided into 2 groups. One received a suspension of Glipizide (270µg/kg) in 2% w/v of gum acacia and other received Glibenclamide suspension (180 µg/kg) through the oral route and blood samples were collected at different time intervals (0, 0.5, 1, 2, 4, 8, 12, 18 and 24 h).

In the next part of this experiment, all the healthy rats were treated with Lornoxicam (1.64 mg/kg) orally for one week. On the 7th day, 6 h after the administration of Lornoxicam, the rats fasted for 18 hours. On the 8th day, blood samples were collected for determining fasting blood glucose levels and Lornoxicam (1.64 mg/kg) was administered orally to all the animals. After 60 min, Glipizide (270 µg/kg) or Glibenclamide (180µg/kg) was adminis-tered to animals. Blood samples were collected thereafter at different time intervals (0, 0.5, 1, 2, 4, 8, 12, 18, and 24 h).

(iii) Effect of Lornoxicam Pre-treatment on the Antidiabetic Activity of Glipizide and Gliben-clamide in Diabetic Rats: In the first part, the diabetic rats in a group (n=6) of 2 received a suspension of Glipizide (270µg/kg) & Glibenclamide (180µg/kg) through the oral route and blood samples were collected by tail vein.

Statistical Analysis: The data were expressed as mean ± standard error of the mean. The signifi-cance was determined by Paired Student’s t-test. Data were computed for statistical analysis using Graph Pad Instat and prism software. The results were considered statistically significant if P<0.05. 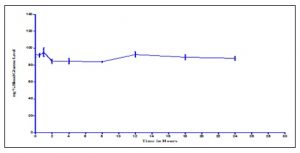 TABLE 1: INFLUENCE OF LORNOXICAM AND ITS PRE-TREATMENT ON GLIPIZIDE AND GLIBENCLAMIDE INDUCED HYPOGLYCEMIA IN HEALTHY ALBINO RATS 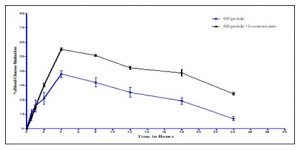 Influence of Lornoxicam Pre-treatment on the Glipizide and Glibenclamide Induced Hypo-glycemia on Diabetic Albino Rats: In diabetic rats, pre-treatment of Lornoxicam (1.64 mg/kg,p.o.) once a day for 7 consecutive days, with Glipizide and Glibenclamide significantly decreased onset of hypoglycemic action (from 1 hour before treatment to 0.5 hours after treatment). Glipizide increased peak hypoglycemia (35.19±0.44% reduction before treatment to 44.21±0.29% after treatment) and the duration of hypoglycemia was enhanced from 12 to 24 h. 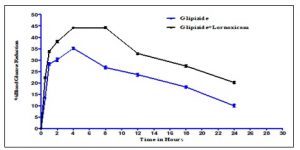 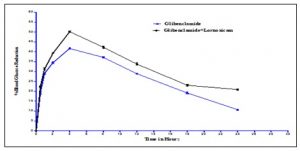 Also, Glibenclamide increased peak hypoglycemia (41.65±0.38% before treatment and 50.14±0.41% after treatment) and the duration of hypoglycemia was increased from 12 to 24 h. The results of these findings are compiled in Table 2 and graphically depicted in Fig. 4 and 5.

DISCUSSION: In contemporary life, people are suffering from one or more diseases and need multi-drug therapy for survival. Due to multiple diseases, patients need more than 5-6 drugs every day. Due to this therapeutic jungle, the chances of drug interactions are increasing by more than 50% 14. Drug interactions result when one drug alters the pharmacokinetics of another drug or its metabolites 15. The co-administration of these drugs may complicate the pharmacotherapy, and the signi-ficance is mostly harmful and seldom useful. Hence, it is crucial to assess the possibility of drug-drug interactions between multiple drug prescriptions.

Rheumatoid Arthritis and DM are two common chronic conditions that frequently coexist and can significantly affect individual health care needs. In this repute, the current study involving the influence of lornoxicam on oral hypoglycemic agents is essential. Among the oral hypoglycemic of different categories, the most mostly prescribed drugs were insulin and later are sulfonylureas like glipizide and glibenclamide 16, 17.

Lornoxicam, a congener of tenoxicam, is a new NSAID belonging to the oxicam derivative with extremely potent anti-inflammatory and analgesic activity 18. It is widely used for the symptomatic treatment of pain and inflammation in patients with rheumatoid arthritis and osteoarthritis. Moreover, it showed great efficacy in the management of pre-operative and post-operative pain 19.

Drug-drug interactions that usually occur in clinical practice are mostly evaluated by using animal models (rodent or non-rodent species) 20.  Here, the rats having normal glucose levels quickly recognize the interactions, and the animal model having pathophysiological circumstances authenticate the results. Here, the risk of additive sort of drug-drug interaction is nullified since Lornoxicam itself does not have hypoglycemic activity, so the interaction is at the pharmacokinetic level.

The iso-enzymes cytochrome (CYP), CYP2C9, CYP2C19, and CYP3A4 is responsible for the metabolism of glibenclamide 21. Similarly, the other oral antidiabetic drug glipizide is metabolized by microsomal isoenzymes CYP2C9, CYP2C19 and CYP3A4 22. Documented reports reveal that the study drug lornoxicam is a competitive inhibitor of hepatic CYP450, especially CYP2C9 and little effect on CYP3A4 and CYP1A2 23. As peak hypoglycemic activity of glipizide and glibenclamide is enhanced significantly after lornoxicam pretreatment in every case it is inferred that the interaction at the metabolic phase has played a significant role in the effect. The prolongation of hypoglycemic action may be due to the inhibition of specific enzymes responsible for its metabolism by lornoxicam. Based on blood sugar levels both before and after lornoxicam treatment it is suggested that, when an NSAID drug lornoxicam is co-administered with routine oral hypoglycemic drugs such as glibenclamide or glipizide for a specified period, there occurs the pharmacokinetic type of drug-drug interaction in both normal and diabetic animals.

It is further suggested that readjustment of dose and frequency of administration of oral antidiabetic agents should be made when they are used simultaneously with Lornoxicam.

CONFLICTS OF INTEREST: I hereby declared that there is no conflict of interest.