The present study was aimed to establish a protocol for multiple shoot induction via the culture of cotyledonary nodes of Clitoria ternatea L., procured from 15 days old aseptic seedlings. Seeds were germinated on MS basal medium supplemented with gibberellic acid (1.0 μM) within one week of inoculation. Cotyledonary node of Clitoria ternatea L. gave rise to multiple shoots (number of shoots varied) when cultured on MS medium fortified with different concentrations of Benzyl adenine (BA) and Kinetin (Kn). The highest rate of shoot multiplication (16.04 ± 0.24) with 90% response was obtained on MS medium containing Benzyl adenine (5.0 μM). Regenerated and elongated shoots were rooted on half strength MS medium fortified with Indole 3-butyric acid (IBA) (2.0 μΜ) after two weeks of sub-culturing. Complete plantlets were then hardened, acclimatized and transplanted to natural conditions, where they exhibited 80% survivability. Hence, from this study, we report for the first time in vitro propagation from cotyledonary nodes collected from in vitro grown seedlings of Clitoria ternatea L. About 10 weeks required from culture initiation to plantlet regeneration. The protocol reported in this study can be used for rapid and large scale propagation of Clitoria ternatea L.

INTRODUCTION: Clitoria ternatea L. also known as “butterfly pea” is a multipurpose forage legume belongs to family Fabaceae. It is distributed in tropical Asia, the Philippine Islands and Madagascar 1. The root, stem and flowers are recommended for the treatment of snake bite and scorpion sting 2. Traditionally, the root of this plant has laxative, diuretic, anti-inflammatory and anthelminitic properties due to which, it is useful in the treatment of dysentery, severe bronchitis, asthma and hectic fever 3. Also, the root extract is helpful in improving learning and memory in rats 4.

The wild stock of this important plant species has been rapidly diminished due to overexploitation and no efforts for its replenishment has been undertaken till date. Thus, this species has been listed as a rare plant species by the International Union for Conservation of Nature and Natural Resources (IUCNNR) 5. However, propagation of C. ternatea L. through seeds is unreliable due to poor seed germination rate and less survivability under natural conditions Anonymous, 1988.  To fulfil the increasing demand of this potent medicinal plant, in vitro culture is an alternative method for conservation of this diminishing plant population.

Sparse reports on in vitro studies of C. ternatea L. using a variety of explants such as leaf, immature embryo, nodal segments and excised root 6, 7, 8, 9 respectively are available. Pre-existing regeneration protocols of this plant species are not much efficient, repetitive and take lot of time for in vitro propagation. Therefore, this research study provides an efficient and repetitive protocol for micropropagation of C. ternatea L.

MATERIAL AND METHODS: The seeds of C. ternatea L. were procured from the Botanical garden, Aligarh Muslim University, Aligarh (India). Then, they were sown in earthen pots at Deptt. of Botany, University of Rajasthan, Jaipur (India) for the regular supply of explants to carry out experiments during  Nov., 2008-April, 09.

For the procurement of cotyledonary node explants, seeds were kept under running tap water to remove adhering dust particles for about 15 min. They were then treated with 0.1% (v/v) teepol for about 5 min., rinsed with distilled water at least thrice. Further, sterilization of seeds were done in laminar air flow chamber in freshly prepared aqueous mercuric chloride (0.1% HgCl2) (w/v) solution for 2-3 min., followed by rinsing with sterilized distilled water for about 3-4 times. Sterilized seeds were then inoculated on MS medium supplemented with different concentrations (0.5-2.5µM) of gibberellic acid (GA3) (Data not shown).

Cotyledonary nodes taken from the seedlings does not require sterilization, inoculated on MS basal medium supplemented with different concentrations of BA & Kn (0.5, 2.0, 2.5, 3.0 and 5.0µM), respectively.  The pH of the medium was adjusted to 5.8 by adding few drops of 1N HCl and 1N NaOH prior to autoclaving and adding 0.8% (W/V) agar. 20ml of prepared homogenous solution was poured equally in the culture vials. All culture vials were plugged with non absorbent cotton. All replicates of the prepared nutrient medium in the culture vials wrapped with butter paper and sterilized by autoclaving at 15 lbs/inch² pressure at 121oC for 20 mins.

Prior to inoculation, UV tubes were switched on for 45 min. to sterilize the culture vials, so as to remove the chances of contamination. The explants were incubated in the culture room under controlled temperature (25±2oC), 50-55% relative humidity for 16 hrs photoperiod with a photosynthetic photon flux density (PPFD) of 50 µmolm-2 s-1 provided by cool, white fluorescent tubes.

Cotyledonary node inoculated on MS medium augmented with BA and Kn at different concentrations (0.5-5.0µM), respectively, gave rise to varied number of shoots at different concentrations of each hormone. The maximum number of shoots was obtained on MS medium supplemented with BA (5.0µM). The number of shoots in medium fortified with BA was greater than those observed in the medium fortified with Kn. Cultures were subcultured onto the same fresh medium after every 2 weeks.  The frequency of shoot multiplication per explants and shoot elongation were escalated on subsequent sub-culturing.

Elongated shoots were separated and transferred to root induction medium (half strength MS medium) having different concentrations of IBA (0.5-3.0µM). Every concentration of IBA produced roots with varying responses, but highest was observed on 2.0µM. The complete plantlets were carefully removed from the medium and washed gently with sterilized double distilled water to remove any traces of medium on roots. Then they were transferred to sterile soil rite. Plantlets were hardened by keeping inverted glass beakers onto them to provide high humidity, controlled temperature and the intensity of light could be assured by cool, white fluorescent tubes. After two weeks, plantlets were gradually transferred to partial sunlight for acclimatization. Finally, they were transplanted to earthen pots containing sterile garden soil.

RESULT AND DISCUSSION: The cotyledonary node procured from 15 days old germinating seedlings were used as explants (Plate, Fig. A). Cotyledonary nodes cultured on hormone free MS medium did not produce any shoots.  During the research work, shoot induction was observed on MS medium along with BA and Kn at their different concentrations, but the percent response was superior on BA alone as compared to Kn alone (Graph 1). The explants showed shoot initiation after one week of inoculation and multiple shoots (16.04±0.24) were achieved on BA (5.0µM) with 90% response after first sub culturing  (Graph 1; Plate, Fig. B, C, D). In consonance to the results obtained during the research endeavour, BA was more effective than Kn for multiple shoot formation in grain legumes 10, Pterocarpus marsupium 11, Vigna mungo 12, Holarrhena antidysenterica 13, Prosopis cineraria 14 and Lycopersicon esculentum 15. In contrast to the above results achieved during the study 16, reported plant regeneration on MS medium supplemented with BA and Kn in combination in Centella asiatica. Moreover, a combination of BA and IAA produced maximum number of shoots in Aegle marmelos L. (Corr.) 17 and BA, Kn and NAA favoured multiple shoot production in Elaeocarpus robustus Roxb. 18.

In vitro regenerated and elongated shoots (5-6 cm. long) were incised and transferred onto the rooting media containing half strength of  MS salts medium supplemented with IBA and strong in vitro rooting response was achieved on IBA (2.0 µM) after 15 days of sub-culturing (Table 1, Plate, Fig. E).  The number of roots per shoot varied with different concentrations of IBA However, root development was slow at higher concentrations of IBA than that of optimum concentration (2.0 µM) along with diminished growth at lower concentrations of IBA (Table 1).  The success of IBA in promoting efficient root induction has also been reported earlier in C. ternatea 7, Psoralea corylifolia 19 and Withania somnifera (Dunal) L. 20.

In contrast to this, efficient roots were induced on MS medium fortified with IAA in Cardiospermum halicabum and Azadiractha indica 21, 22, respectively and NAA was also proved to be best for in vitro rooting in C. ternatea L. 23. After the development of roots, the plantlets were taken out from the culture vial and washed with sterilized distilled water to remove adhering agar medium, so that the chances of contamination could be stopped. Then these juvenile plantlets were transferred to the earthen pots containing sterilized soil and vermicompost (3:1) and kept in plant growth chamber for their hardening at optimized natural conditions like temperature, light and humidity. After 22-28 days, these plantlets were simultaneously exposed to natural environment, where 80% plantlets survived well in the field (Plate, Fig. F). 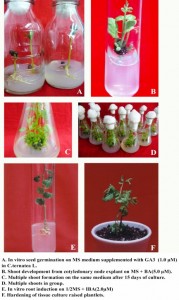 TABLE 1:  EFFECT OF DIFFERENT CONCENTRATIONS OF IBA SUPPLEMENTED WITH ½ STRENGTH OF MS MEDIUM ON ROOT INDUCTION IN CLITORIA TERNATEA L.

Values represent mean ± SE of 28 replicates per treatment in three repeated experiments. Mean values within the column followed by the same letter are not significantly different by the Tukey’s test at 0.05% probability level 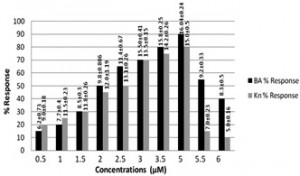 GRAPH 1: PERCENTAGE RESPONSE OF MULTIPLE SHOOTS ON MS MEDIUM AUGMENTED WITH DIFFERENT CONCENTRATIONS OF BA AND KN THROUGH CN