Due to the limited life span of platelets during regular storage in blood banks, we were interested to investigate the both potential hemostatic effect and dose-dependent response properties of non-viable platelet preparations with injection of two high and low doses in experimental animal model. Infusible platelet membrane (IPM) was prepared from outdated platelet concentrates. Platelet concentrates were pooled, disrupted by freeze-thaw procedure, pasteurized for 20 hours to inactivate possible viral or bacterial contaminants and finally formulated with sucrose and human serum albumin. Rabbits were made thrombocytopenic. Administration of IPM at two doses of 0.5 and 2.0 mg per kg results significant reduction in the bleeding time. The values of bleeding time in the 80 data sets were obtained. Reduction in the percentage of bleeding time elevation during 2, 4, 6 and 24 hours after injections of 0.5 mg/kg were found 56.8, 66.0, 73.7 ,96.8 and after 2.0 mg/kg injections were observed 24.8, 39.0, 52.4 and 95.6  respectively. We concluded that IPM can significantly reduce bleeding time in thrombocytopenic rabbits with two high and low doses of IPM that confirms potential hemostatic efffect and also shows dose-dependent response property and finally may support its clinical potential utility as a transfusion substitute for platelets.

INTRODUCTION: Platelets play a vital role in the maintenance of normal hemostatic activity. For patients with thrombocytopenia or impaired platelet function, platelet transfusion can have an important value in preventing or treating hemorrhage. Unfortunately, blood platelet units are generally stored in blood banks for 3-5 days; thereafter they are discarded 1-3.

For preserving hemostatic effects of platelets for a long period, many efforts have been made to develop substitutes for platelets.

A number of studies have confirmed that platelet preparations with impaired metabolic or functional integrity still retain a certain degree of hemostatic property 4-7. Infusible platelet membrane (IPM) as a potential transfusion substitute for platelets prepared from outdated human platelets has been shown to correct prolonged bleeding times in thrombocytopenic rabbits with the additional advantage of long shelf life and increased viral safety 8-9. Platelet microparticles are microvesicles of platelet membranes that form during the activation or mechanical disruption of platelets 10.

They form spontaneously during platelet storage and can be detected in platelet concentrates 11-13, fresh frozen plasma and cryoprecipitate 14. They have properties of procoagulant activity 15. Due to these microparticles have similar hemostatic properties as intact platelets, they can be considered as a strategy for the development of a platelet substitute. However, the earliest efforts of these preparations were not successful in vivo and produced considerable distress in experimental animals 16.

With regard to this problem, the investigations postponed for nearly three decades until experiments in thrombocytopenic rabbits provided preclinical evidence of their hemostatic efficacy without significant morbidity 17.

In this study we want to show that IPM is effective at both high and low injection doses to shortening the bleeding times in thrombocytopenic rabbits with dose-dependent response property and may be clinically used as a potential platelet substitute in the treatment of bleeding due to thrombocytopenia.

Preparation of IPM: IPM is prepared from 8 outdated platelet units of Tehran Blood Transfusion Center. The units were pooled and centrifuged for 15 min at 1000 RPM to remove contaminating red cells and white cells. The supernatant was centrifuged for 30 min at 2500 RPM to remove plasma. The precipitate was resuspended in 25 ml physiological saline solution (0.9 g%). For lysis and disruption of platelets, freeze-thaw procedure was repeated three times at -80°C and room temperature for 6 and 2 h respectively. The solution was washed twice with physiological saline solution for removing of intracellular components by centrifugation (30 min at 2500 RPM). The precipitate was resuspended in 45 ml of the same solution.

Pasteurization of Sample: The sample of IPM with 0.4 M sodium caprylate concentration was prepared and heated at 60°C for 20 h to inactivate possible viral or bacterial contaminants and formulated with sucrose 1 M and human serum albumin 0.1%.

A stopwatch was started immediately and every 30 seconds filter paper was used to draw off the blood. The time from when the incision was made until all bleeding has stopped was called the bleeding time.

RESULTS AND DISCUSSION: In previous studies bleeding time has been used to determine the hemostatic effectiveness of various agents in the rabbit model 18-20.

In this study, we administered IPM at two different doses of 0.5 and 2.0 mg per kg, to thrombocytopenic rabbits with platelet count of 50 to 70 ×103 per μL, and we performed 80 sets of bleeding time measurements before and 2, 4, 6 and 24 hours after IPM injection.

The values of bleeding time in these 80 data sets are summarized in Table 1.

TABLE 1: RESULTS OF BLEEDING TIME MEASUREMENTS DURING BEFORE AND AFTER IPM INJECTIONS AT TWO DOSES OF 0.5 AND 2.0 MG/KG IN RABBITS

The 20 sets of percentages of bleeding time elevations, and the corresponding data from 2 administrations of excipient (sucrose and human serum albumin in 0.9% siodium chloride) to another group of rabbits, are summarized in Fig-1. For comparison of results, we expressed decrease in the percentage of bleeding time elevation after the administration of IPM to thrombocytopenic rabbits (Fig. 1). As one can see from top curve in Fig. 1, there is no significant change in the bleeding times of animals given excipient used in IPM formulation. Reduction in the percentage of bleeding time elevation during 2, 4, 6 and 24 hours after injections of 0.5 mg/kg were found 56.8, 66.0, 73.7 ,96.8 and after 2.0 mg/kg injections were observed 24.8, 39.0, 52.4 and 95.6  respectively (Fig. 1). 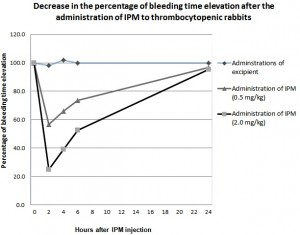 FIG. 1: DECREASE IN THE PERCENTAGE OF BLEEDING TIME ELEVATION AFTER THE ADMINISTRATION OF IPM TO THROMBOCYTOPENIC RABBITS. The bleeding time was measured to a maximum of 15 minutes after 8 administrations of IPM at two doses of 0.5 and 2.0 mg per kg and 2 administrations of excipient (sucrose and human serum albumin in 0.9% sodium chloride).

The results of previous study was nearly similar to our study and has shown that administration of IPM (2 mg/kg) can shorten the prolonged bleeding time in thrombocytopenic rabbits at least 4 h after infusion 8; however, in our study the maximum decrease in the percentage of bleeding time was observed at 2 h after infusion instead of 4 h.  In addition, its dose-dependent response was the most important finding in this research that reveals more hemostatic effectiveness as a potential transfusion substitute for platelets. In both studies this hemostatic effect was no longer detectable after 24 h of IPM administrations.

However, in this research, the bleeding time was used to determine the response in a group of rabbits, almost identical in age and weight, that are relatively healthy, though thrombocytopenic. An important finding of this study was the change in the bleeding time during the early hours after the injection of IPM. An acceptable number of animals has been used, and the each assay was performed in duplicate.

Our results indicate hemostatic effectiveness of IPM and its dose-dependent response in this experimental setting.

The possible efficacy of IPM in the treatment of bleeding in a large population of  thrombocytopenic patients with various clinically significant consequences is not resolved and can be determined only by human clinical trials which will be performed in future.

CONCLUSION: Data obtained in our experimental setting indicate that the injection of IPM at the two high and low doses: