The potential of methanol extract as a potent antimicrobial agent has been observed to be an effective means to combat disease causing pathogenic organisms. Growth pattern of Escherichia coli cells showed that the growth of cells decreased with an increase in concentration of extract. The specific relationship between the specific growth rate and the substrate concentration was thus be obtained by fitting these data into Monod kinetic model.  The non competitive and uncompetitive inhibition kinetic models were also tested in order to determine the inhibitory effects of the methanol extract of roots on Escherichia coli. Longest lag phase of 8 hrs was obtained at nutrient broth concentration of 2 g/L. Kinetic studies showed that with an increase in concentration of extract (10-30 g/L) the specific growth rate and inhibition constant decreased but saturation constant increased.  Therefore the biokinetic constant estimated by these models have laid the possibility of obtaining suitable antibiotic from Alstonia scholaris.

INTRODUCTION: Whole plants or their parts have been used extensively since time immemorial in treating various disorders and have been alternative to the modern chemical based drugs because of potent side effects. The family Apocynaceae to which Alstonia scholaris belongs have more than 250 genera and 2000 different species of tropical plants like Rauwolfia serpentine, Alstonia scholaris, Alstonia venenata and Vinca rosea1. Most of these plants have been used against various diseases of skin, heart diseases, liver diseases, dysentery tumors and hypertension.

Alstonia scholaris is a tropical evergreen tree most commonly found in south Asia. So far almost all parts of plants have found to show some therapeutic activity. Leaves, stem bark, roots and inflorescence have shown antimicrobial properties against most common disease causing organisms 1, 2. The various alkaloids (Echitamine, Ditamine) found in bark have been used in the treatment of diarrohea and malaria 3, 4, 5. The bark extract is also a useful remedy for treating asthma, lung cancer, hypertension, and pneumonia while the leaf extract is used to treat fever6. It is effective against boils and ulcers and can be cured by applying milky latex or young leave as poultice over affected area.

The latex obtained from the various plant parts is useful in treating ailments like ulcers, sores, tumours, and rheumatoid pain 7.   Roots however have been reported to have very rare medicinal use in enlarged liver and pain but no therapeutic intervention is available so far.

The existing data on the antimicrobial activities can be evidenced by the pathogen-extract interaction. It is well recognized by cell biologists that loss of cell viability may be greatly attributed to the large increase in membrane permeability because of the destruction of plasma membrane in the presence of high concentrations of extracts 8. Therefore the present study was undertaken to establish the effect of inhibitory substance like methanolic root extract on pathogen using Monod kinetic and the toxic effects of the inhibitor concentration (Methanolic concentration) could be studied using inhibition models viz. Non Competitive and Un Competitive 9, 10, 11.

Collection and processing of plant materials: The fresh plant parts of Alstonia scholaris were collected and powdered which was then subjected to solvent extraction using methanol as a solvent in a soxhlet apparatus. The phytochemical investigation and antimicrobial screening of the various plant extracts were done. The plant extract with highest antimicrobial activity was chosen to proceed with the kinetic modelling of pathogen inhibition.

Microorganism & Growth Media: In the present study, E. coli culture was maintained in nutrient agar media and was stored at 4.±1oC. The culture was inoculated in nutrient broth with concentrations varying from 2g/L to 10 g/L and methanol root extracts with concentrations varying from 10 g/L to 30 g/L respectively. The cultures were kept under shaking conditions at 37 °C. The biomass (g/L) was harvested at different time intervals and was compared with respect to the control conditions (0 g/L extract).

Kinetic Approach: The relationship between the specific growth rate and substrate concentration in absence of inhibitory substance can be described by the Monod equation as given below.

Ks and µm values can be determined from the plot of 1/ µ versus 1/So (assuming S= So at the beginning of exponential growth) yields a linear line with a slope of Ks/ µm and y-axis intercept of 1/ µm. In presence of inhibitory (toxic) substances in nutrient media, microbial growth becomes inhibited, and specific growth rate depends on inhibitor concentration12. Inhibitions models viz. Non competitive and Uncompetitive are classified according to the effects of toxic compounds on the specific growth rate and saturation constant Ks and the rate expressions of the models are expressed as follows:

Where; Co and KI are the methanol root extract concentration (g/L) and inhibition constants of extract (g/L), respectively. Eq. (3) can be linearized as similar to Eq. (2):

The µm,app values can be determined from the linear plot of 1/ µ versus 1/S at different initial extract concentrations and then the value KI can be calculated from Eq. (5).

This equation can be linearized as follows; 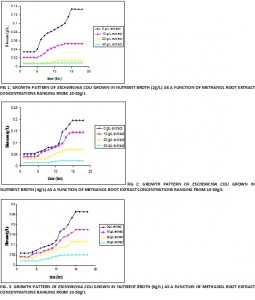 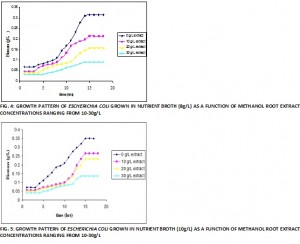 Inhibition Models: In absence of Methanol root extract concentration, the values of µm and KS for Escherichia coli was determined as 0.136 h-1 and 0.484 g/L. respectively from Monod equation by linear regression method. As the Monod expression for growth kinetics did not represent the inhibitory effects of the extract, Non competitive inhibition model and Uncompetitive model were tested to characterize the methanol root extract inhibition kinetics of Escherichia coli. The µmapp values could be determined from the intercept of linear plot of 1/ µ versus 1/S at different extract concentrations (Fig. 6).The values of inhibition constant KI was also estimated from found µmapp and known extract concentration values. 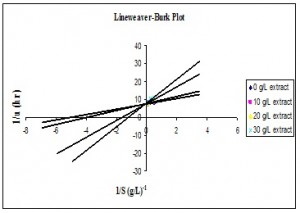 ACKNOWLEDGEMENT: The authors would like to thank VIT University for providing necessary facilities and support to carry out this research work.