INHIBITION OF ACETYLCHOLINESTERASE IN ALZHEIMER’S DISEASE- AN IN SILICO APPROACH

INHIBITION OF ACETYLCHOLINESTERASE IN ALZHEIMER’S DISEASE- AN IN SILICO APPROACH

Alzheimer's disease (AD) is a progressive degenerative disease of the brain marked by gradual and irreversible declines in cognitive functions. Acetylcholinesterase plays a biological role in the termination of nerve impulse transmissions at cholinergic synapses by rapid hydrolysis of acetylcholine. The deficit levels of acetylcholine lead to poor nerve impulse transmission. Thus the cholinesterase inhibitors would reverse the deficit in acetylcholine levels and consequently reverse the memory impairments characteristic of the disease. In the present work, functionalized coumarin compounds and their derivatives were docked into active site of Acetylcholinesterase using the docking programs GOLD and GLIDE. The compounds were screened using High throughput screening, and further subjected to Induced Fit Docking studies. Further, the QSAR studies revealed the best structure activity relationship and 100% of human oral absorption. The inhibitor compounds also satisfied the PASS (Prediction of Activity Spectra for Substances) results of inhibiting the activity of acetylcholinesterase. The type of interaction they exhibit and the residues with which they interact convey that both the compounds are good inhibitors of Acetylcholinesteraseas they exhibit drug like activity.

INTRODUCTION:Alzheimer's disease (AD), also called Alzheimer disease, Senile Dementia of the Alzheimer Type (SDAT) or simply Alzheimer’s is the most common form of dementia. Alzheimer's disease (AD) is a slowly progressive disease of the brain that is characterized by impairment of memory and eventually by disturbances in reasoning, planning, language, and perception 1    (Fig. 1). AD neuropathological hallmarks include extracellular deposits of amyloid-β (Aβ) peptides (amyloid hypothesis), intracellular neurofibrillary tangles (tau hypothesis), neuronal and synaptic degeneration/loss, and neuroinflammation. 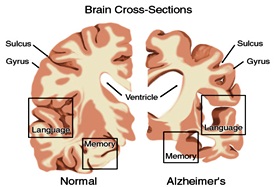 Plaques build up between the nerve cells and contain deposits of a protein fragment called beta-amyloid. The hyperphosphorylated tau begins to pair with other threads of tau and form neurofibrillary tangles inside nerve cell bodies. This may result in the microtubules disintegration, loss of communication between neurons and later in the death of the cells 2, 3. The dramatic loss of synapses and degeneration of cholinergic cells results in the reduction of acetylcholine (Ach), which is believed to play a vital role in the cognitive impairment associated with AD. Recent study showed that Acetylcholine Esterase (AChE) plays role in accelerating Aβ plaques deposition. Thus the cholinergic hypothesis has become the leading strategy for the development of anti AD agents which are inhibitors of AChE 4.

The 4-hydroxy-3-substituted coumarin moiety is a common fused heterocyclic nucleus found in many natural products of medicinal importance. Several of these natural products exhibit exceptional biological and pharmacological activities such as antibiotic, antiviral, anti-HIV, anticoagulant and cytotoxicity properties. Additionally, coumarin derivatives have been used as food additives, perfumes, cosmetics, dyes and herbicides 7.

So far, only five drugs have been approved by US FDA that temporarily slow worsening of symptoms for about six to twelve months. The limited number of therapeutic options for AD drives the exploration of new drugs. Enhancement of the central cholinergic function by the inhibition of acetylcholinesterase is a prominent clinically effective approach for the treatment of AD 8, 9. The derivatives of functionalized coumarins have been synthesized and identified to potentially inhibit the Acetylcholinesterase and monoamine oxidase 10.

This study was aimed at identifying the potential derivatives of functionalized coumarins inhibiting the PDB (1N5R) structure of Acetylcholinesterase (Fig. 2) by docking studies. Docking studies was performed using two different softwares GLIDE and GOLD. The results were compared and the best inhibitor compounds were identified and quantitative structure activity relationship of the best compounds were analysed. 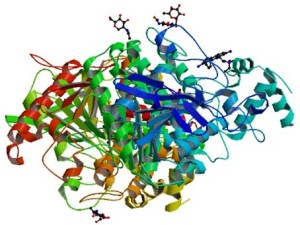 Selection of Docking Molecules: A set of 35 derivatives of coumarin molecules were drawn using the workspace of Maestro for the docking studies. All the ligands were built using Maestro build panel. The collected ligands were prepared by using LigPrep [14] which uses MMFF 94s force field and gave the corresponding low energy 3D conformers of the ligands. These ligands were neutralized and checked for their ADME properties using QikProp [14]. QikProp helps in analyzing the pharmacokinetics and pharmacodynamics of the ligand by assessing the drug like properties.

Target Protein Preparation: The three dimensional crystal structure of ACETYLCHOLINESTERASE - PROPIDIUM COMPLEX with the PDB ID: 1N5Rwas used as a target structure in the current study. It was downloaded from the Protein Data Bank (PDB) (http://www.rcsb.org) (Fig. 2). Before docking the ligands into the protein active site, the protein was prepared using protein preparation wizard of Schrödinger’s molecular docking software.

In this protein preparation all water molecules and hetero atoms were removed. All hydrogen atoms were added to the protein, including the necessary to define the correct ionization and tautomeric states of amino acid residues such as Asp, Ser, Phe and Tyr. The active site of the protein was defined for generating the grid. The screened ligands were then docked into the prepared grid, for which “standard precision mode” was selected. No constraints were defined.

GLIDE: Docking was carried out using GLIDE (Grid-Based Ligand Docking with Energies) software. Glide searches for favourable interaction between one or more ligand molecules and a receptor molecule. Glide can be run in a rigid or flexible docking methods; the latter automatically generates conformation for each input ligand. The combination of position and orientation of a ligand relative to receptor, along with its conformation in flexible docking, is referred to as a ligand pose. The ligand poses that Glide generates pass through a series of hierarchical filters that evaluate the ligands interaction with the receptor. The initial filters test the spatial fit of the ligand to the defined active site, and examine the complementarity of ligand-receptor interactions using a grid-based method patterned after the empirical ChemScore function.

Poses that pass these initial screens enter the final stage of the algorithm, which involves evaluation and minimization of a grid approximation to the OPLS-AA non-bonded ligand receptor interaction energy.

Final scoring is then carried on the energy-minimized poses. By default, Schrödinger’s proprietary Glide Score multi-ligand scoring function is used to score the poses. Glide Score is based on the ChemScore, but includes a steric-clash term and adds buried polar atoms devised by Schrödinger to penalize electrostatic mismatches:

GOLD: The protein molecule was imported into GOLD (Genetic Optimisation for Ligand Docking) software. The ligands were also imported. GOLD was run in a particular way such that a particular atom number was given from the identified active site. The GOLD was setup to run at an active site radius of 3.5 Å. The output folder was also specified. All the other fitness function parameters and the genetic algorithm parameters were kept in default mode. The output was produced as GOLD Fitness scores and different energy functions. The fitness scores were mainly considered for the results and screening. The ligands with scores of 42 (GOLD Fitness score for co-crystallized ligand) and above were only considered. The GOLD was run and the output was viewed using Silver and pymol. The output were analysed for the properties such as hydrogen bonding.

PASS PREDICTION: It is possible with computer program PASS (Prediction of Activity Spectra for Substances), to predict the biological activity spectrum for a compound on the basis of its structural formula. PASS predicts 3678 pharmacological effects, mechanisms of action, mutagenicity, carcinogenicity, teratogenicity and embryotoxicity. All the best inhibitor compounds were analysed for their activity spectra using PASS.

Binding mode of Propidium, the ligand: The compound propidium is bound deep within a narrow pocket formed by the inter lobe cleft of the catalytic domain as reported in the x-ray crystallographic and the G-Score value is -4.9 (Table 3). The main chain Asp74:O, Tyr72:O, Ser293:O and Arg296:O of AChe form hydrogen bonds with inhibitor (Fig. 3A).

Binding mode of Coumarin derivative compounds with Ache: The binding efficiency of the Coumarin derivative compounds with the target is shown in (Table 3) and the G-score value is ranging between -4.58 to -7.86. Out of 35 compounds tested, compounds 7b and 7c showed the best G-Score value of -5.8 and   -5.2 respectively. More negative Glide Score indicates the better interaction of the inhibitor with the target protein. (Fig. 3B & 3C). 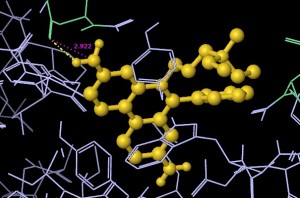 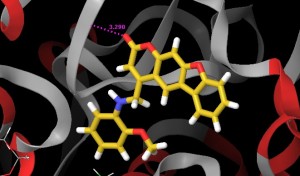 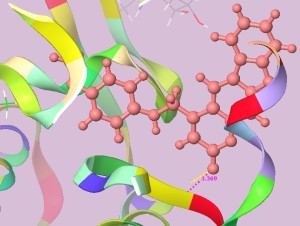 FIG. 3. POTENTIAL GLIDE DOCKING POSE FOR THE LIGANDS (A) PROPIDIUM, (B) 7b And (C) 7c WITHIN THE ACTIVE SITE OF ACETYLCHOLINESTERASE

The structure and IUPAC names of ten best docked inhibitor compounds are shown in Table 1. A comparison of the different docking poses of compounds suggests that the compounds 7b and 7c  namely 4-((methoxyphenylamino) methyl)-2H-benzofuro[3, 2-g]chromen-2-one and 4-((4-methoxy phenylamino) methyl)-2H-benzofuro[3, 2-g]chromen-2-one showed fairly potent activity against AChe with the more negative G-Score value than the ligand.

TABLE 1: LIST OF SELECTED COMPOUNDS, ITS STRUCTURE AND IUPAC NAME 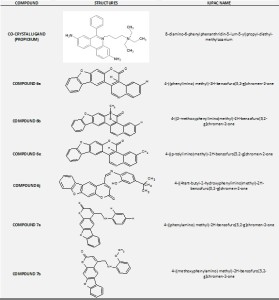 TABLE 2: ACTIVE SITE RESIDUES BEFORE DOCKING USING PYMOL The compounds was positioned in a similar orientation to that of propidium and forming hydrogen bonding with the residues Asp74, Tyr72, Arg296, Phe295 and Ser293 of the catalytic domain as shown in table 2. The calculated distances between these residues and the ligand molecule ranged from 2.365 Å to 3.489Å. The presence of strong hydrogen bond interactions between the oxygen atom of the ligands and Ser293 was observed. This hydrogen-bonding network places the inhibitor such that van der Waals contacts are made with the side chains of AChe. These results indicate that the predicted nonbonding interactions and hydrophobic chain to accommodate the ligands similar to the experimental data obtained from crystal.

The GOLD Fitness score for the Propidium ligand was 41.11. The interaction of the ligand with the receptor molecule was viewed using Silver.The ligand has shown good interaction with the residue (N-H…O) Ser 293 by forming hydrogen bond of 2.453Å length.  The GOLD Fitness score for the compound 7b [4-((methoxyphenylamino) methyl)-2H-benzofuro [3, 2-g] chromen-2-one] and 7c [4-((4-methoxyphenylamino) methyl)-2H-benzofuro [3, 2-g] chromen-2-one] was found to be 56.11 and 54.90 respectively. Both the compounds 7b and 7c were found to interact with the target at the active site Ser293 (N-H…O) by forming the hydrogen bond of length 2.481 Å and 2.510 Å respectively (Fig. 4). 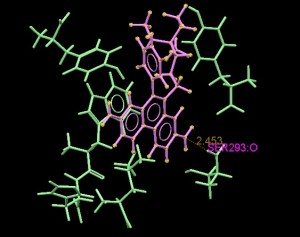 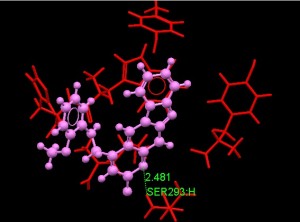 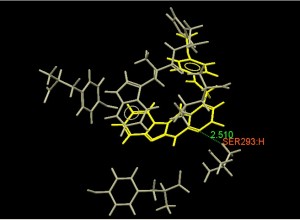 FIG. 4. POTENTIAL GOLD DOCKING POSE FOR THE LIGANDS (A) PROPIDIUM, (B) 7b AND (C) 7C WITHIN THE ACTIVE SITE OF ACETYLCHOLINESTERASE

The compounds 6j, 7a and 7b  showed the inhibiting activity for the enzyme acetylcholinesterase and also their usage in the treatment of Alzheimer’s disease

PASS prediction results for the biological activities of the compounds showed that the compounds 7b and 7c have the inhibitory action to AChE (Table 5). Based on ADME results (Table 6) Compounds 7b and 7c are found to satisfy all the necessary parameters to act as a Drug. Both have a Percentage human oral absorption of 100. They also obey all the rules of 5.

ACKNOWLEDGEMENTS: My heartfelt thanks to Prof. Dr.D.Velmurugan, Centre of Advanced Study in Crystallography and Biophysics, University of Madras, Chennai – 600 025 for permitting me to do the work in his lab. My immense gratitude to Dr. N.Santhi, Department of Biochemistry, Biotechnology and Bioinformatics, Avinashilingam University for Women, Coimbatore – 641 043, for helping me to conclude my work. Thanks to Asia Pacific Bioinformatics Conference – 2010 team for accepting my paper for poster presentation.