ABSTRACT:  Antihypertensive properties of plant can be evaluated by in vitro method on inhibition of Angiotensin Converting Enzyme (ACE) activity.  In this research, we investigate the inhibitory effect of several common edible plants on blocking ACE activity. ACE activity was evaluated by using N-hippuryl-L-histidyl-L-leucine (HHL) as substrate and the inhibitory effect of extracts were determined based on the level of hippuric acid by measuring its absorbance using spectrophotometer. Gelatin-salt block test for detection of tannins was carried out prior to the enzymatic assay. Among the extracts tested, Peperomia pellucida L. showed strong inhibitory activity with IC50 value of 7.17μg/mL, followed by Nasturtium officinale and Sesamum indicum L. with IC50 values of 15.44 and 30.16μg/mL, respectively. Furthermore, Peperomia pellucida was the most potent inhibitor of ACE activity in vitro with IC50 value of 7.17 µg/ml, which was comparable to that of captopril (13.68 µg/ml), a potent ACE inhibitor. This study shows that these plants may develop as antihypertensive agent

INTRODUCTION: Hypertension is well known as a major risk factor for cardiovascular and renal disease. Asymptomatic pathological condition for years is associated with heart attack or stroke complication in persons with hypertension, so that often called a ‘silent killer’. The renin-angiotensin-aldosteron system (RAAS) have an important contribution in maintenance vascular tone and involved in controlling blood pressure.  The key enzyme in the RAAS is angiotensin converting enzyme (ACE). ACE is a cell membrane peptidase that plays a central role in the regulation of blood pressure through the production of angiotensin II, the potent vasoconstrictor.

ACE will catalyse the conversion of angiotensin I into the active vasoconstrictor, angiotensin II 1. The vasodilating non a peptide bradykinin was also inactivated by ACE, which theoretically contributes to the hypertensive effects of ACE activity 2.

Angiotensin II causes vascular smooth muscle contraction, so the peripheral resistance will increase. Angiotensin II also causes sodium retention (and thereby water retention) in the distal tubules indirectly by stimulates the synthesis and release of aldosterone from the adrenal cortex, which increases blood pressure 2. Recent research suggests that angiotensin II can inactivates the vasodilatory compounds endothelial derived vascular relaxing factor (nitric oxide – NO) and prostacyclin (PGI2) by stimulates the production of superoxide anion and hydrogen peroxide in the polymorphonuclear leucocytes 3. From this mechanism can be understood that inhibition of ACE activity will prevent hypertension and its complication. ACE inhibitors are widely used for the treatment of cardiovascular disease. Since they improve blood pressure, ACE inhibitor can be used to control patients with hypertension and acute myocardial infarction 4, asymptomatic left ventricular dysfunction 5, congestive heart failure 6 and renal dysfunction 7.

Herbal medicine is one of the alternative treatments that are widely used by the people of Indonesia. Indonesia is one of the richest country in the world with natural sources abundance. Many ethno pharmacologic data have been collected based on certain ethnic. Most of them was focus to maintain the vitality and to treat some disease related to age. Based on the daily habit of Indonesia indigenous people, they used to take some wild plants as vegetable and spices, such as Peperomia pellucida, Eleutherinepalmifolia, Allium schoenoprassum, Sesamum indicum, Nasturtium officinale, Limnocharisflava, Luffa cylindrical, Allium cepa, Moringaoleifera, Piper nigrum, Curcuma xanthorrhiza and Leucaenaleucocephala. They believed that these plants may give advantage to their health, more specifically on blood flow. Some of plants were also used as traditional medicine since a long time ago to decrease blood pressure. But, the scientific data is limited. We are interested to know the effect of these plants to maintain blood flow associated with blood pressure. As a part of our research for a natural therapeutic approach to the treatment of high blood pressure, in vitro screening has been conducted to evaluate the ACE inhibition activity of the methanolic extract of selected medicinal plant in this study.

Twelve plants were collected from different parts of Java Island, Indonesia. The voucher specimens were identified and deposited at the Herbarium bogoriense, West Java, Indonesia.

The plants materials were dried at room temperature and ground to yield powders. One hundred gram of each plant were macerated using methanol (1 x 24 h/each). Each extract was concentrated by using vacuum rotary evaporator to give crude extracts. The yields of extracts were calculated based on dry weight. The solution of plant extracts were prepared by dissolving them in 80% of ethanol. For plant extracts which showed ACE inhibition activity above 80%, serial dilution were made in final concentrations of 100, 50, 25, 12.5 and 6.25 µg/µL.

ACE inhibitor activity was determined by using Cushman and Cheung method with slight modification 8. Briefly, 20μL of the sample solution was added to 50μL of 8mM HHL as substrate and 10μL of ACE solution (0.25 U/mL). The mixture were mixed well and incubated for 1 hour in 37oC. The reaction was stopped by adding 62.5 μLHCl 1M. The hippuric acid formed was extracted with 375 μL of ethyl acetate. Finally, ethyl acetate layer was dried in vacuum oven and 4mL of water was added. The absorbance of hippuric acid was measured by using UV-Visible spectrophotometer at 228 nm. Blanks were measured by replacing ACE with water while 100% activity value was determined by replacing sample with 20 μL of water.

The percentage inhibition of ACE activity was calculated as follows:

Where: A = absorbance of control

B = absorbance of control blank

Gelatin-salt block test for detection of tannins was carried out according to the method described by Sharifi (2013) with modification. Briefly, 200 mg of extract was dissolved in 4 ml 50°C distilled water and allowedto cool at room temperature. Four drops of 10%NaCl solution (w/v) was added to the cooledextract to `salt out' any non-tannin compounds, there by eliminating any false-positive tests fortannins 9. The extract solutions were filtered and 1 ml of the filtrate was placedinto four shallow white porcelain wells. Each well was respectively added with four drops of 1% gelatin solution, four drops of mixture solution containing 1% gelatin and 10% NaCl, and three drops of 10% ferric chloride (FeCl3) solution. No reagent was added to control. The reaction was observed for the formation of precipitate 10.

All the data are presented as means ± standard deviation (SD) from triplicate experiment and was analysed using Statistically Package for Social Sciences (SPSS) software version 18. A one way analysis of variance (ANOVA) was used for multiple comparison. The concentration of the extracts required to inhibit 50% oxidation (IC50) for active extract was determined using probit programme. P<0.05 was considered to be statistically significant.

The plants material were successively extracted by maceration using methanol. The crude extracts was obtained from solvent evaporation under vacuum. The yields of crude extracts were calculated based on dry weight. The yields of extract which obtained from maceration technique have a value between 7.38 and 25.32%. Among the extracts, Allium schoenoprassum showed the highest yield of extract about 25.32% followed by Moringaoleifera L. and Alliumcepa with the yield values of 21.28 and 15.56%, respectively (Table 1).

TABLE 1.THE YIELD OF CRUDE EXTRACTS.

The effect of 12 methanol extracts of selected Indonesia edible plants on ACE activity were evaluated. The inhibitory effect on ACE activity was performed by in vitro method using HHL as a substrate. ACE converts HHL into hipuric acid and histidil-leusin. The activity on ACE inhibition was evaluated based on the level of hipuric acid by measuring its absorbance using spectrophotometer. The activity was measured quantitatively in the presence or absence of the extract. Captopril was used as the positive control. Captopril showed high

percentage inhibition with value of 86.0% at 100 µg/mL final concentration. The effect of captopril on ACE activity is shown in dose dependent manner. The Inhibition of ACE by captopril at various concentration is shown in Figure 1. Captopril is the potent ACE inhibitor for controlling blood pressure. ACE is associated with endothelial dysfunction in hypertension and the development of atherosclerosis. Blockade of ACE activity can prevent the progression of atherosclerosis and reduce the cardiovascular event. 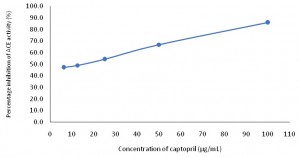 FIGURE 1: INHIBITION OF ACE BY CAPTOPRIL AT VARIOUS CONCENTRATION.

TABLE 2.INHIBITION (%) AND IC50 VALUES (µg/mL) OF THE METHANOL EXTRACTS OF SOME EDIBLE PLANTS ON ACE INHIBITION.

Most of the extracts showed significant inhibition activity which indicate that the extract contained potensial compound as ACE inhibitor. Peperomia pellucida, was the strongest inhibitor of ACE activity in vitro which was comparable to that of captopril. Peperomia pellucida has been used as vegetable in daily life in Indonesia. This plant also was used as traditional medicine since a long time ago to decrease blood pressure. But, the scientific data is limited. From this study, we can conclude that Peperomia pellucida showed a mechanism action as ACE inhibitor. Furthermore, it’s more potent than captopril as a positive control.

The gelatin salt test for detection of tannins was done prior to enzyme assay. This test is usefull for determine the presence of tannins which can give false conclusion of activity. Tannin could be found in most of methanolic extracts. Tannins can chelate the zinc ion of ACE, thus inactivating it. In this assay, another chelating agent can interfere decision of conclusion. The result showed tannin contain was limited. There is no significant difference the yield value of extract between before and after tannin elimination. This result showed that the inhibition on ACE activity is not due to tannin contain.

Peperomia pellucida, Nasturtium officinale and Sesamum indicum were further investigated to determine the source of activity. The common phytochemistry content from plant such as flavonoid, alkaloid, terpenoid and antraquinone have identified (Table 3). Most of recent studies revealed that the inhibitory activity on ACE is due to the flavonoid content in plant. ACE, a crucial enzyme in the regulation of the renin– angiotensin system, is a zinc-containing peptidyl dipeptide hydrolase 12. The active site of ACE is known to consist of three parts. The first part is a carboxylate binding functionality such as the guanidinium group of arginine.

The second is a pocket that accommodates a hydrophobic side chain of C-terminal amino acid residues and the third is a zinc ion. The zinc ion coordinates to the carbonyl of the penultimate peptide bond of the substrate, whereby the carbonyl group becomes polarized and is subjected to a nucleophilic attack. Flavonoids were suggested to show in vitro activity via the generation of chelate complexes within the active centre of ACE 13. Free hydroxyl groups of phenolic compounds are also suggested to be important structural moieties to chelate the zinc ions. This chelating process will inactivate the ACE 14.

The interesting result of phytochemical screening of active extracts was founded in this research. There was no flavonoid have been detected.

CONCLUSIONS: This study indicates that most of the selected Indonesia edible plants have potential as sources of ACE inhibitor. Further studies will be carried out to identify the active compounds in the plant extracts for development into lead structures with maximum inhibitory activities on ACE activity.

ACKNOWLEDGMENTS: This study was supported by Directorate General of Higher Education, Ministry of National Education and Culture, Republic of Indonesia and Directorate of Research and Community Engagement, Universitas Indonesia via Hibah PUPT 2013.