INHIBITION OF MYCOBACTERIAL GLYCOSYLTRANSFERASES WITH PHYTOCOMPOUNDS- AN IN-SILICO APPROACH

INHIBITION OF MYCOBACTERIAL GLYCOSYLTRANSFERASES WITH PHYTOCOMPOUNDS- AN IN-SILICO APPROACH

ABSTRACT: Emergence of Mycobacteria that are resistant to common antibiotics necessitate development of novel antibacterial drugs. The complexity of mycobacterial cell envelope plays an important role in its defense against antimicrobial activity of human immune system. The cell wall of Mycobacteria constitutes a set of carbohydrate-containing molecules. Glycosyltransferases, the glycan processing enzymes play a significant role in assembling these moieties. Targeting these enzymes could therefore interfere with the virulence of the pathogen thus leading to non-proliferation or its death. The significant role of these enzymes makes them novel targets for drug action. Natural products are important sources of pharmacologically relevant compounds. The present study has been undertaken to evaluate the inhibition potential of selected phytochemicals against glycosyltransferases of Mycobacterium. Fourteen antimicrobial phytochemicals were selected from the NCBI Pubchem Database. These phytochemicals were further screened using Lipinski’s rule of five. Molecular docking was performed to identify new potential inhibitors against Mycobacterial glycosyltransferases using Discovery studio 4.0 with these compounds. These sets of phytochemicals were further screened for toxicity using ADMET descriptors. The compounds were analyzed based on the binding affinity. Gingerol was identified as the best compound in this study based on its dock score, binding affinity and ADMET analysis

INTRODUCTION: Mycobacterium is a genus within the order Actinomycetales, which comprises a large number of well characterized species, several of which are associated with human and animal diseases. Many mycobacterial species are nonpathogenic organisms but others cause important diseases 1. Mycobacterium tuberculosis causes tuberculosis (TB), whereas M. leprae is the causative agent of leprosy. In addition, immunocompromised individuals, for example, those that are HIV+, are susceptible to infections by ‘atypical’ mycobacteria, such as M. avium-intracellular complex (MAC) 2.

Though treatments for these diseases are available, they require long drug regimens involving multiple antibiotics 3. This is mainly due to their complex cell wall. The compositional complexity of the mycobacterial cell wall distinguishes Mycobacterium species from the majority of other prokaryotes. Classified as Gram-positive organisms, their envelopes do in fact share notable features with gram-negative cell walls, such as an outer permeability barrier acting as a pseudo-outer membrane.

The cell envelope of members of this genus, including the tubercle bacillus, Mycobacterium tuberculosis, consists of a characteristic lipid-rich cell wall that constitutes an effective permeability barrier, imparting resistance to many therapeutic agents 4, and contributes to their virulence 5. This distinct cell envelope consists of a covalently linked mycolyl-arabinogalactan-peptidoglycan (mAGP) complex, which in turn intercalates with various non-covalently bound complex lipids that vary among different mycobacterial species and within strains of the same species.

Glycosyltransferases (GTs) are enzymes that establish natural glycosidic linkages on a wide range of small and macromolecules including cell wall components, natural products, other saccharides, proteins and even nucleic acids. The biosynthesis of glycans is primarily determined by the GTs that assembles monosaccharide moieties into linear and branched glycan chains. The result of glycosyl transfer can be a carbohydrate, glycoside, oligosaccharide, or a polysaccharide 6. Thus these play essential roles in these biological processes. They are found to be performing a similar role in Mycobacterium sp. as well. Therefore, intervention of GTs has attracted remarkable interest for drug development since inhibitors of GTs can potentially interfere pathological processes, in which these proteins are involved. With the recent advances of glycomics and chemical glycobiology, the considerable potential of GTs as drug targets has been revealed and prospective strategy for GTs inhibition has been developed 7.

The rapid development of computational tools remarkably helps in narrowing the gap between in vitro and in silico methods. Applications of these tools vary from genome sequencing to drug discovery. New medicines are developed based upon biological targets and their specific interactions with various compounds. Natural products isolated from plants have played an important role in discovery of drugs against infectious diseases.Ayurvedic herbs and formulations are one such group of compounds which has a wide spectrum of therapeutical or biological activity that can be exploited in pharmaceutical drug discovery and drug design. For years, docking has been a powerful tool for medicinal chemists, allowing the rapid and inexpensive identification of a pool of potential protein inhibitors 8, 9. The present study employs molecular docking to evaluate the interaction of glycosyltransferases from Mycobacterium and selected phytocompounds.

Fourteen antimicrobial compounds from 14 different plant species were taken for this study. The study employed filtering of the phytocompounds using Lipinski’s rule of five, predict the binding orientation of the compounds using molecular docking analysis and ADME/Toxicity studies to test the pharmacokinetic properties of the compounds.

The three dimensional crystal structure of a Mycobacterial protein (PDB ID: 3CKO) was retrieved from the Protein Data Bank (PDB) and prepared using ‘prepare protein’ protocol of Discovery Studio 4.0 (DS). Water molecules and heteroatoms were removed and hydrogen atoms were added. Energy minimization was performed by applying CHARMm force field to avoid steric overlap and to relax the conformation 10. It is a program for macromolecular dynamics. This optimized and energy minimized protein was further used for docking analysis.

The active sites of the protein were predicted using Discovery Studio based on the ‘receptor cavity method’ 11. The active site was predicted by identifying the key residues in the target protein, glycosyltransferases which are responsible for ligand binding. The active sites identified were used for protein-ligand interaction studies.

14 phytochemicals from 14 medicinal plants such as Allium sativum, Apium graveolens, Cinnamomum cassia, Colchicum autumnale, Justica adhatoda, Mikanialea vigata, Origanum vulgare, Piper betel, Pulsatilla vulgaris, Thymus vulgaris, Vanilla planifolia, Vitisvinifera, Withaniferasomnifer and Zingiber officinale were taken as ligands for the interaction study. The phytochemicals were taken based on their antimicrobial properties. Molecular structures of these phytochemicals were retrieved from the compound database of Pub Chem. It is a public database which provides Information various properties of molecules such as chemical formula, molecular weight, Xlogp, compound structure, hydrogen bond donor and acceptor. These structures were then prepared using ‘prepare the ligand’ protocol of Discovery Studio 12.

Drug likeliness of the selected phytochemicals was examined using Lipinski and Veber rule through Discovery studio version 4.0. The phytocompounds were checked for Lipinski’s rule of 5 which include molecular weight < 500 daltons, number of hydrogen bond donors < 5, number of hydrogen bond acceptors <10, calculated water partition coefficient (CLOGP) < 5. All the compounds passed the rule and these were taken for docking studies 13.

Molecular docking is a method to predict the binding orientation of small molecule candidates to their protein targets and in turn predict the binding affinity and strength of association between the target and ligand. The docking was performed between the active binding region of the energy minimized structure of 3CKO and the screened phytocompounds using CDOCKER docking protocol of Discovery studio 4.0. CDOCKER is a molecular dynamics based docking algorithm which uses the CHARMm force field and offers full flexibility to ligands including dihedrals, angles and bonds 14. The efficiency and accuracy of compounds in the binding process depend on scoring functions.

The pharmacokinetics and toxicity of selected phytocompounds were evaluated using ADME/ toxicity studies. Phytocompounds with acceptable ADMET values were identified for finding the best inhibitory compounds.

The Mycobacterium GT protein retrieved from PDB has 329 amino acids. The retrieved 3D structure of this protein was prepared using Discovery Studio. The protein was then energy minimized to stabilize the structure for performing docking analysis. The potential energy (kcal/mol), van der waals energy (kcal/mol) and electrostatic energy (kcal/mol) of the receptor molecule was minimized. Minimized receptor structure is more stable and it is ready for performing docking analysis. The optimized and energy minimized structure of GTs is presented in Fig.1. The active site prediction was done by receptor cavity method and this method identified three active sites. Of these predicted active sites, active site 1 was selected as the binding site for the study by cross checking with PDB database and the identified hotspot comprised of amino acid residues such as PRO55, LEU57, SER140, ASP141, TYR234 and ARG266 . 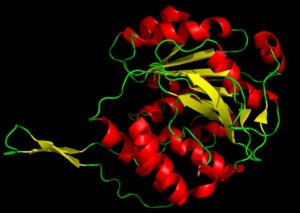 Molecular docking analysis of the Mycobacterial glycosyltransferases with the 14 phytocompounds was performed using Discovery Studio 4.0. The CDOCKER protocol of DS was employed in this regard. Docking studies on selected molecules provide a variety of interactions between target and ligand. The measure of interaction is determined by the energy values, number of hydrogen bonds and binding energy thus providing a balanced confirmation. Among the fourteen, the phytocompounds namely Apigenin, Kaempferol and Gingerol displayed highest CDOCKER energy and interaction energy. Apigenin showed CDOCKER energy of 51.67 kcal/mol, and a binding energy of -96.26 kcal/mol. CDOCKER energy and binding energy of the next best compounds, i.e. Kaempferol, Gingerol were 47.09, 45.13 and -95.51 and -85.07 kcal/mol respectively. The results of the analysis are shown in Table 2.

TABLE 1: DETAILS OF 14 PHYTOCOMPOUNDS USED IN THE STUDY ALONG WITH THEIR LIPINSKI’S PROPERTIES

Considering the comparable CDOCKER energy and interaction energy with low binding energy, six compounds were forwarded for ADMET analysis. The results are presented in Table 3. These studies are based on the ADMET (Absorption, Distribution, Metabolism, Excretion and Toxicity) properties of the compounds. These properties provide insights in to the pharmacokinetic properties of the compounds and were checked using Discovery Studio’s built in ADMET protocol.

The ADMET studies showed that only 4 compounds the, namely, Gingerol, Syringaldehyde, Cinnamicaldehyde and Vanillin passed all the ADMET parameters. Gingerol was selected as the best compound among these three based on CDOCKER energy, CDOCKER interaction energy, binding energy and hydrogen bonds along with the ADMET properties. It should also be noted that Gingerol showed 3 hydrogen bonds which were below 2.5Å.  An earlier study showed that Gingerol might be one of the best drug candidates to treat diseases caused by Mycobacterium sp.15. The other compounds, Syringaldehyde, Cinnamicaldehyde and Vanillin showed three, two and one hydrogen bonds respectively that were also well below 2.5Å which indicates strong interaction.

The hydrogen bond interaction between Gingerol, Cinnamicaldehyde and the target is shown in Fig.2. The results thus indicate that Gingerol is the best compound that can be considered as a potential candidate for the inhibition of Mycobacterial Glycosyltransferases. 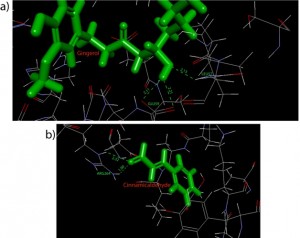 FIG.2: HYDROGEN BOND INTERACTIONS BETWEEN a) GINGEROL AND 3CKO b) CINNAMICALDEHYDEAND 3CKO

It is interesting to note that the two compounds, Apigenin and Kaempferol, which had the best CDOCKER and binding energy showed a hepatotoxic nature in ADMET studies. Both these compounds showed hepatotoxic nature when tested with DS and thus are not recommended as good drugs for enteral use. However, it has to be noted that these compounds can be considered as good drug candidates for topical medication (or external use) in the case of diseases caused by some specific species of Mycobacterium such as M.leprae.

CONCLUSIONS: The molecular docking studies of 14 antimicrobial phytocompounds with Mycobacterium glycosyltransferases showed that none of the compounds used in the study violate the Lipinski’s rule of five parameters. The analysis also showed that 6 of the phytocompounds showed good interaction with the glycosyltransferase protein. Also, ADMET studies with these compounds using Discovery Studio 4.0 revealed that 4 compounds are in the acceptable range of various pharmacological parameters and that 2 compounds showed hepatotoxic nature.

From all these analyses, we conclude that Gingerol could be the best candidate to design enteral drugs and two compounds, namely Apigenin and Syringaldehyde to be good lead molecules to design topical medication and that these phytocompounds can be used for experimental testing against mycobacterial glycosyltransferases.

ACKNOWLEDGMENT: The financial support from Department of Biotechnology (DBT), Ministry of Science and Technology, Govt. of India is gratefully acknowledged.