Cyclin dependent kinases (CDKs) are known as cell cycle regulators in eukaryotic cell cycle. Different CDKs (CDK2, CDK4 etc.) are having structure homology among them. Using computer based molecular modeling tools, interactions between naturally occurring terpene based compounds with crystal structure of CDK4 mimic CDK2 enzyme having PDB ID : 1GII. Using In-silico techniques, the binding energies between terpene based compounds and receptor enzymes are calculated in the form of ΔG in kcal/mol.  The reported binding energies for series of molecules are ranging from –5.35 to –13.20 kcal/mol.  The negative docking energies and a few hydrogen bonds between selected ligands and receptor enzyme support the affinity of Terpene based compounds with CDK4 mimic CDK2 enzymes. It is also found out that those compounds having carbon atoms 30-31 interacts better with enzyme, whereas larger size compounds having carbon atoms higher than 40 show weak interactions. It is concluded that Tri-terpene class of compounds are the best CDK4 mimic CDK2 inhibitors.

, more than 23000 known natural products, Terpene based compounds are the largest class of natural products. Among this group, many interesting compounds show biological activities and used as a medicine for treating various disease including cancer 4, 5 .

The discovery of new anti-cancer agent is a very long, expensive and risky process. However recent advances in computation chemistry and biological sciences are now yielding new paradigms that allow the researchers to model and understand drug targets and to discover drugs that are cheaper and safer than the existing ones within a short time span. The availability of crystal structures of target protein enables the use of structure-based drug design techniques. These technologies include virtual screening, pharmacophore development and structure based optimization 6, 7 . The drug discovery process activates from the selection of target enzyme. The drug molecule interacts with target enzyme and inhibits it.

The successful inhibition of enzyme with small drug molecule stops the normal functioning of enzyme and hence cessation of normal enzyme functionality 7.

In major cases of cancer treatment the cell regulator enzymes are target enzymes. The cyclin-dependent protein kinases (CDKs) are regulators of the timing and coordination of eukaryotic cell cycle events. CDKs are inactive as monomers and their activation requires binding to cyclins with phosphorylation by CDK-activating kinase on a specific threonine residue. The cyclin belongs to diverse family of proteins and their levels oscillate during cell cycle 8, 9, 10, 11.

It is reported that genetic alteration of one or more components of the, p16INK4A-CDK4,6/cyclin D-retinoblastoma pathway is found in more than half of all human cancers. Therefore, CDK4, one of the CDKs, is an attractive target for the development of a novel anticancer agent 12, 13, 14, 15, 16, 17.

Conversely, it is difficult to make CDK4-specific inhibitors that do not possess activity for any other kinases, especially CDK2, because the CDK family has high structural homology. The three-dimensional structure of CDK2 particularly that bound with the inhibitor has provided useful information for the synthesis of CDK2-specific inhibitors, but still today, the crystal structure of CDK4 is not available.

To overcome this problem, M. Ekuta et al 18., have synthesized a CDK4 mimic CDK2 protein in which the ATP binding pocket of CDK2 was replaced with that of CDK4.

In-vitro analysis of plant origin compounds against cancer cell lines are major research areas. The most important problem with this analysis is to know the scientific reasons of interactions between chemical compounds and cell organelle. To improve the drug likeness of the chemical compounds, the inhibition information are most essential one. Availabilities of various state-of-arts, computer based, drug discovery tools helps in providing the insight of interactions between small molecules and target enzymes. The importance of these tools is due to their ability to show the possible interactions between ligand and receptor enzyme at atomic level.

They also calculate the probable binding energies between them and explore the numerous possibilities of ligand confirmations inside enzyme active sites. These tools provide the binding energy (∆Gbind) in kcal/mol.) between ligand and receptor enzyme (or of complex formed). This technique is used for screening the library of molecules showing better interactions for further drug discovery processes.

Terpene based natural products can be made more effective as a drug if their interactions at enzyme level are known. This is possible by using computer based molecular modeling techniques. The most prominent technique is docking of small molecule (ligand) with target enzyme.

Binding energy in kcal/mol is the major parameter investigated using these programs along with steric, hydrophobic and electrostatic interactions. It also provides the list of possible hydrogen bonding between ligand and enzyme.

The aim is to investigate the possible binding energies, various interaction poses, and possible hydrogen bonding and hence understanding the effectiveness of these molecules as a CDKs inhibitor, particularly CDK4 inhibitor.

Design of small molecules (Ligand): To study inhibition of enzyme with designed small molecules (called as ligand), twenty five Terpene based known natural products are selected as listed in Table 1.

The 2-D and 3-D structures of these molecules were design using ChemOffice software 12. The process of 2D and 3D design is elaborately explained in the user manual of ChemOffice and used whiteout any modification.

The finalized 3D structures of molecules were tested for global minima by ascertaining the minimum energy values of the molecule.

Selection and preparation of Receptor Enzyme: The selected target enzyme is the crystal structure of CDK4 mimic CDK2. Crystal structure downloaded from online resources 18. Its PDB ID is 1GII. The structure is having uniqueness by having active site of CDK4 into the structure of CDK2. Generally all CDKs are homologues in their structures and hence an inhibitor interacts with one CDK, also interacts with another with slight change in its activities. But there is the need to prepare unique inhibitor, which inhibit only CDK4 and avoid others. 1GII provides the facilities of CDK4 active site within CDK2 structure. The molecular description of 1GII is reported by Ikuta, M. et al 19. CDK4 has an additional space that accommodates large substituents.  Inhibitors designed to bind into this large cavity of CDK4 must be selective only for CDK4 without having substantial CDK2 activity 19. The molecular description of CDK4 mimic CDK2 is reported in table 2 19.

The selected enzyme structure was prepared in such a way that it has no ambiguities in the form of missing atoms or amino acids. All the hetero atoms (i. e. non-receptor atoms such as water, ions, etc.) were removed. Kollmann charges assigned and Solvation parameters were added to the final macromolecule structure using the Addsol utility of AutoDock 20, 21, 22.

The place of natural inhibitor into the enzyme is selected as the active site of enzyme for docking process.

Docking: Docking is a procedure to interact ligand (small chemical compound) with receptor site of enzyme. Autodock 20, 21 is used to study the interactions of designed compounds with selected protein.

To perform docking, protein grid design using the grid design tools available with Autodock.  Docking was performed using both genetic (GA) and non-genetic (Non-GA) algorithm techniques. The genetic algorithm is the newly adopted conformational search techniques and provides very accurate and quality results in very short duration of simulation time. The controlled parameter and settings, which were used for docking, are listed in table 3.

The docking algorithm makes use of force field equations and parameters to calculate the binding energy between ligand and enzyme, the binding free energy is the total of van der Waals interactions, H-bond interactions, electrostatic interactions and the internal steric energy 22.

Table 4 reports the binding energies, hydrogen bonding (HB), amino acids involved in HB and the HB distances of the selected five molecules. It is reported that these molecules are having binding energies higher than -12 kcal mol-1. Except Kaurane, all others participate in making HB with average distance of 2.5 A°.  Two amino acids of active site, 84 HIS and 145 ASP, play active role in making hydrogen bonding with ligand.

Figure 1, 2, 3, 4 and 5 shows the picture of ligand-enzyme complexes of Arjunolic acid, Kaurane, Lupeol, Maslinic acid and Sapogenin respectively. The picture is limited to binding site of enzyme only. Each figure represents docking in two styles, wireframe and CPK mode. It is very clearly viewed that the ligand fits into the active site of enzyme. 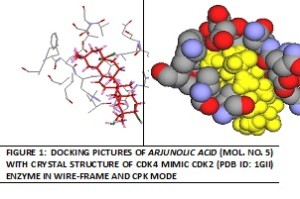 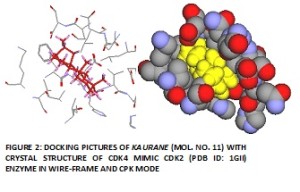 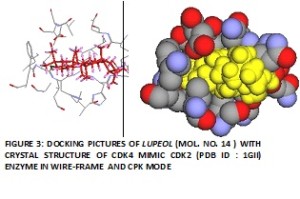 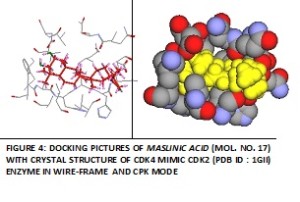 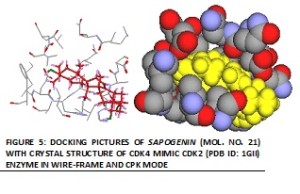 Cluster analysis: The docking procedure produce cluster analysis report. The cluster analysis helps in understanding the conformation of ligand molecules in enzyme docking site at the time of flexible interactions. Higher the cluster number along with higher docking energy shows the possibilities of best fitting of ligand and hence higher ligand-protein complex stability.

DISCUSSION: Terpene based selected molecules are better selected by CDK4 mimic CDK2 enzyme and provides better interaction than existing natural inhibitor. In case of competitive inhibition, the studied molecules will be preferred than the existing natural inhibitor. The binding energy values are negative in all cases and ranging from -5.35 to -13.20 kcal/mol., as reported in table 6.

It is also reported that Arjunolic acid (Mol. No. 5 ), Kaurane (Mol. No. 11 ), Lupeol (Mol. No. 14 ), Maslinic acid (Mol. No. 17 ) and Sapogenin (Mol. No. 21 ) are better ligands and inhibit CDK4 mimic CDK2 with compact fitting and better binding energy values. The stability of the ligand-enzyme complex in the case of selected five molecules are higher as they also shows the possibilities of hydrogen bonding between ligand and amino acid molecules of enzyme. The higher stability is also supported by the cluster values as reported in table 5. The selected five molecules have better stability as suggested by simulation data indicates the possibilities of active and stable CDK4 inhibitors.

CONCLUSION: Generally CDKs enzymes are homologues in their structures and hence, if a molecule inhibit one type of CDK, it is also possible to inhibit other CDKs. This may not be the better requirement for drug designer. The best molecule is one which inhibits uniquely the selected CDK. In present study, the selected CDK is CDK4 mimic CDK2 and has the active site of CDK4. It is already reported that CDK4 active site is larger compare to other CDKs and hence, it can be claimed here that the best five molecules show inhibition properties with CDK4 must not bind with other CDKs in larger domain.

The selected five molecules belong to Tri-terpenes except Kaurane. They all are five member rings and have structure similarity.

It is concluded that among number of Terpene based natural products, Tri-terpene poses to be the best CDK4 inhibitor, particularly those molecules having five rings. The study also indicates that they will largely inhibit CDK4. The further synthetic modification of these molecules by replacing functional groups may provide unique CDK4 inhibitors and hence anti-cancer agents.

ACKNOWLEDGEMENT: We sincerely thanks to U.G.C, New Delhi, for necessary support and Dr. B. J. Ghiya, Professor Emeritus, Institute of Science, Nagpur for necessary technical guidance.