INTRODUCTION: Pain, multi-dimensional phenomenon, is an unpleasant sensation can be caused by stimulation of pain receptors located in (but not limited to) skin, joints and many internal organs 1. Among the various type of pain, acute pain can occur secondary to acute disease processes, trauma, or operative procedures.

In past opioid analgesics were frequently used to manage postoperative pain but were associated with a high incidence of nausea, vomiting, constipation, oversedation and respiratory depression 2. In recent decades, non-steroidal anti-inflammatory drugs (NSAIDs) are preferred therapeutic agents used for treatment of acute pain.

Over 30 million people across the globe use NSAIDs daily for the management of pain 3. NSAIDs are the most commonly prescribed classes of medication that have proven efficacy in managing pain, fever, and inflammation 4. Intramuscular or intravenous NSAIDs are frequently used when oral medications is not feasible or require rapid onset of analgesia. According to one recent survey, Diclofenac is the most popular and widely prescribed NSAID, with a market share almost equal to the combined sale of ibuprofen, mefenamic acid, naproxen 5. Like other NSAIDs, Diclofenac inhibits cyclooxygenase enzyme hence produced a dose-dependent adverse effect on gastrointestinal, cardiovascular, and renal system 6. Currently available parenteral formulations of diclofenac in India, have to be administered by either intramuscular injection or slow intravenous infusion 7. In one recent study, diclofenac 75 mg/1mL, IV bolus was compared with diclofenac 75 mg / 3 mL slow IV infusion in patients with postoperative pain 7. As per aforesaid study, diclofenac 75 mg / 1 mL, IV bolus had rapid onset of analgesia and better tolerability at injection site, however, after 12 of injection, 21.7% patients (38/175) in diclofenac 75 mg/1mL, IV bolus group, and 51.4% patients (90/175) in diclofenac 75 mg / 3 mL slow IV infusion group developed thrombophlebitis of various severity at the site of injection. In many post postoperative procedures, multiple injection of NSAIDs are required as IV bolus; however no preclinical safety data are available on repeated diclofenac IV bolus injection. Therefore, looking to the paucity of information on repeated diclofenac IV bolus injection in rats, the present study was planned in Wistar rats, to assess the local effects at the site of injection upon repeated IV bolus injection.

A total of 40 male Wistar rats were procured from Cadila Pharmaceuticals Limited, Dholaka, Gujarat, India and were maintained under standard managed conditions. Rats were acclimatized for seven days before the onset of the study. For feeding, conventional standard laboratory diets were used with the ad libitum supply of drinking water via an automatic watering bottle. Animal care, housing and environmental conditions (temperature, humidity and light-dark cycle) were, according to recommendations stated in the Guide for Care and Use of Laboratory Animals. The experiment protocol was approved by the Institutional Animal Ethics Committee (VETCOLL /IAEC/2019/14/ PROTOCOL-03). Rats were identified by tail markings. Forty male rats were randomly divided on the basis of body weight into a total of four groups with 10 rats in each group. The control group received 0.9% sodium chloride injection. Injections Jonac AQ, Dynapar AQ, and Voveran were administered in group 2, 3 and 4, respectively @ 15.4 mg/kg body weight in the lateral tail vein (2X of the maximum recommended human dose of 75 mg/day based on mg/m2 body surface area comparison). All four group rats were dosed intravenous (IV) bolus, daily once, for consecutive seven days with their respective test articles. Dose-volume was calculated on the basis of body weight taken on 1st day of study and were continued for 7 days. Rats were restrained in intravenous restrainers at the time of dosing. The lateral tail vein was used for dose administration and the tail vein was made prominent/raised, by applying cotton soaked in warm water.

For accurate IV injection, hyperemia of the lateral tail vein was induced by applying cotton soaked in warm water. The doses were administered by intravenous route using a suitable needle fitted with a graduated syringe. At the end of seven days treatment period, six animals per group were sacrificed. Remaining four animals per group were kept for a further seven days recovery period to see the reversibility or persistence of injection site reactions if any.

Treated animals were observed daily for mortality, clinical signs at the injection site. On day 8th (6 rats/group) and Day 15th (4 rats/group) of the study, fasted rats were sacrificed and a detailed gross examination of carcass followed by necropsy was performed. Tails of all animals were collected and preserved in 10% neutral buffered formalin. The distal, middle and proximal part of tails were trimmed transversely. Formalin-fixed samples were decalcified in formic acid before processing for routine histopathological examination. Sections of 5μ thickness were cut and stained with Hematoxylin and Eosin method and observed under a light microscope.

RESULTS AND DISCUSSION:  In comparison to animals treated with normal saline, macules were noted at the injection site after first injection in all three groups. Severity of clinical signs at injection site was increased with study advancement. In the present study, grossly assessed injection site reaction score on study day 8th and 15th are presented in Tables 1 and 2 respectively. Gross lesions of study day 8th and 15th are presented in Fig. 1 and 2 respectively. On day 8 of the study, two rats of normal saline group showed only focal macule of minimal severity, while rats of Jonac AQ, Dynapar AQ and Voveran showed mild to a severe reaction at the injection site. Local reactions at injection site include macule, necrosis/ulceration, dry gangrene and sloughing of the tail. 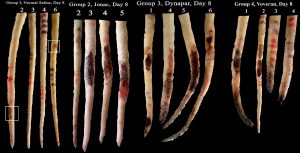 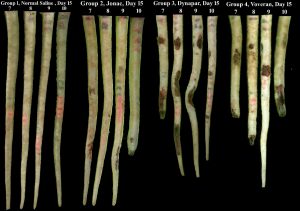 The summary of the histopathology score is presented in Table 3. Microscopically, in the Normal Saline group, 4/10 rats showed minimal hemorrhages around the lateral tail veins, and 2/10 showed minimal perivascular inflammation characterized by minimal to mild exudation of fibrine, infiltration of inflammatory cells and minimal edema. A 1/10 rat showed focal fibrinoid necrosis of minimal severity. In the present study, rats of Voveran (6/10 rats), Dynapar AQ (3/10) and Jonac AQ (1/10 rats) groups showed sloughing of necrotic tails on day 8. A sloughed portion of tails was not sampled for histopathology hence, clinical signs and gross pathology severity are not completely correlated with microscopic changes. Intravenous injection of Jonac AQ, Dynapar AQ and Voveran induced necrosis of tail skin, thrombosis and/or thrombophlebitis, degeneration/regeneration of skeletal muscles and subcutaneous fibrosis of variable severity.

Necrosis of tail skin was characterized by necrosis of epidermis, dermis and/or hypodermis along with infiltration of polymorphonuclear cells. In many animals of treatment group epidermis near to necrosis showed reactive hyperplasia and hyperkeratosis/parakeratosis. When compared with Normal Saline, Dynapar AQ Fig. 3.3A and Voveran Fig. 3.4A group showed high incidence and/or severity of necrosis of tail skin while Jonac AQ Fig. 3.2A showed a low incidence and severity of skin necrosis at the injection site. In the present study necrosis/regeneration of skeletal muscles were taken together because of the presence of both types of the lesion in the same site. Necrosis was characterized by hyalinization of muscle fibers, loss of cross striations, edema, fragmentation and loss of muscle fibers. Regeneration of skeletal muscles was characterized by the proliferation of myoblasts, presence of cells with vesicular nuclei and prominent nucleoli, and one or more centrally placed nuclei in newly regenerated muscle fibers. Variable degree of fibrosis and infiltration of inflammatory cells were noted around nearby tendons. Necrosis/ regeneration of skeletal muscles was noted in all ten rats of Dynapar AQ Fig. 3.3B and Voveran Fig. 3.4B group while 7/10 rats of Jonac AQ group (Fig. 3.2B) showed this lesion.

Subcutaneous fibrosis was characterized by the proliferation of myofibroblast/fibroblast just beneath the hypodermis along with the variable deposition of collagen. Collagen deposition was more severe in recovery animals as compared to the main group. All 10/10 rats of Voveran group, 9/10 rats of Dyanapar AQ group and 7/10 rats from Jonac AQ grouped showed such lesion. Microscopically, Voveran and Dynapar AQ group showed a more severe lesion than Jonac AQ group. 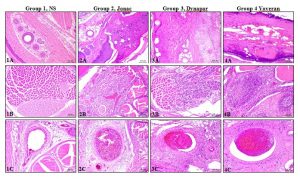 CONCLUSION: In the present study, drug-induced thrombosis and phlebitis are responsible for Nicolau syndrome. The actual composition of all three marketed diclofenac compounds was not known however propylene glycol is generally present in parental diclofenac injection 7 and their concentration plays a significant role in the development of thrombosis, phlebitis and other injection site reaction 7, 9. Low concentration of propylene glycol in intravenous diclofenac injection produced a less adverse effect as compared to high propylene glycol concentration 7, 9. In one study investigators 14 found that diazepam in propylene glycol developed a higher incidence of thrombophlebitis as compared to diazepam dissolved in oil and emulsified in water without loss of therapeutic effect. Among three marketed compounds, Voveran is recommended for intravenous infusion while Jonac AQ and Dynapar AQ are recommended for intravenous bolus and infusion. Hence, Voveran produced moderate to marked local injection site reaction in comparison to Jonac AQ and Dynapar AQ when administrated as an intravenous bolus. However, in a clinical trial, 51.4% of patients developed thrombophlebitis of various severities at the site of injection when Voveran administrated in recommended route 7. In the present study, all three marketed injectable Diclofenac Sodium formulation (Jonac AQ, Dynapar AQ and Voveran) produced variable local injection site reaction as compared to normal saline group. Grossly and microscopically, among all three injectable Diclofenac Sodium formulations, the Voveran group produced more severe local injection site reactions followed by the Dynapar AQ group while Jonac AQ produced minimal to mild local injection site reaction.

ACKNOWLEDGEMENT: Authors are thankful to Dean and Principal, College of Veterinary Science and Animal Husbandry, Sardarkrushinagar Dantiwada Agricultural University, Sardarkrushinagar, Gujarat, India for providing the necessary facilities to carry out this work.

CONFLICTS OF INTEREST: The author(s) declared no potential, real, or perceived conflicts of interest with respect to the research, authorship, and/or publication of this article.