ABSTRACT: Alzheimer’s disease, the most common form of dementia accounting for about 50-60% of the overall cases among persons over 65 years of age is characterized by the progressive decline in cognitive function, mediated through learning and memory. According to Cholinergic hypothesis, AD is caused by reduced synthesis of the neurotransmitter ACh, wherein the AChE levels were increased which causes damage to the cholinergic neurons finally leading to cognitive impairments. Hence, all therapies for AD are targeted at the cholinergic system. In this context, docking studies play key role in computer-aided drug design paradigms. As an attempt to identify such natural cholinomimetic and neuroprotective activities, a set of 25 drug molecules from the phytoconstituents of the plant, Morinda citrifolia Linn. Were collected from PubChem Database. These compounds were docked against human AChE (PDB ID: 1B41 and 1N5R) proteins retrieved from Protein Data Bank were performed by Pyrex Virtual Screening tool (Auto Dock Vina). After docking, among these 25 compounds, the drug molecule Huperizine A (854026) was found to have the highest binding energy with both target proteins viz.1B41 and 1N5R (-10.2- and -10.0 respectively) and it contains best binding affinity and  interaction of amino acids on the active site of protein pocket binding region. Hence, Huperizine A was predicted as the best drug molecule with Anticholinesterase activity for AD

INTRODUCTION: Alzheimer's disease (AD), is a slowly progressive disease of the brain that is characterized by impaired memory and disturbances in reasoning, planning, language, and perception. For a quarter of a century, the pathogenesis of Alzheimer’s disease (AD) has been correlated with cholinergic system abnormalities and intellectual impairment 1. Subsequently, the cholinergic hypotheses of AD gained considerable acceptance, stating that a serious loss of cholinergic function in the central nervous system contributed to cognitive symptoms 2.

Over the years, both evidence for and challenges to the relationship between acetylcholine dysfunction and AD have been put forward 3. The dramatic loss of synapses and degeneration of cholinergic cells results in the reduction of acetylcholine (ACh), which is believed to play a vital role in the cognitive impairment associated with AD. Recent study showed that Acetyl cholinesterase (AChE) plays a key role in accelerating Aβ plaques deposition. Thus, the cholinergic hypothesishas become the leading strategy for the development of anti-AD agents which are inhibitors of AChE 4. At present, AChE inhibitors, Anti-amyloid vaccine and Vitamin E are recommended to treat AD but long-term exposure to these drugs causes side effects.

Hence our present search is focused on plant-derived natural products like Morinda citrifolia L. commonly known as Indian Noni, one of the most significant sources of traditional medicine that may offer treatment for AD. The genus Morinda (Rubiaceae), includes around 80 species. Noni is the Hawaiian name for the fruit of Morinda Citrifolia L. Noni is native from Southeast Asia to Australia and is cultivated in Polynesia, India, the Caribbean, Central and northern South America 10. The Polynesians have been using the Noni plant for food and medicinal purposes for more than 2000 years 11.

A wide variety of pharmacological activities have been attributed to the fruit, leaf and root extracts of noni such as antioxidant 12, 13 and hepatoprotective 14. Nevertheless, there have been only a few reports on the use of noni for CNS disorders such as anxiolytic and antiepileptic 15, neuroprotective effect against stress-induced cognitive impairment 16 and some neuro pharmacological effects 17. As the extracts and fruit juice of M.citrifolia have been shown to possess neuroprotective against Alzheimer’s disease in some earlier studies 18, 19, in the present study a humble attempt has been made to design new lead molecules from Morinda citrifolia L., plant compounds with larger selectivity and AChE inhibitory activity for treating Alzheimer’s disease. 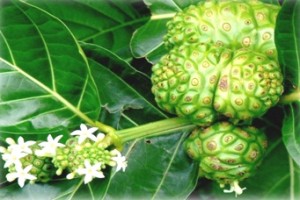 Tools and Softwares employed for Determination of the following parameters

Preparation of Ligands for docking studies:

The 25 bioactive compounds of M. citrifolia Linn., were collected in 3D SDF format from PubChem database http://puBChEm.ncbi.nlm.nih.goc/). The compounds were added with hydrogen’s and energy minimized with UFF force field using conjugate- gradient algorithm by Auto Dock and Pyrex 20. Later,all lead molecules were converted in to Auto Dock Pdbqt format.

Preparation of Protein for docking studies:

The Acetylcholinesterase (PDB IDs: 1B41&1N5R) proteins were retrieved from Protein Data Bank. Then, these two proteins were opened with word document and removed hetero atoms then energy minimization will be performed by using Argus lab. 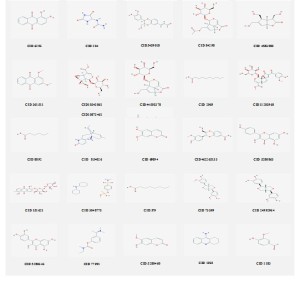 The Pymol interaction of selected drug molecules on the binding pocket of AChE proteins active sites were predicted by using (CASTp) program (http://cast.engr.uic.edu) 21.

The predicted ligand binding pocket for AChE Proteins was shown in Table 2 and 3.

Based on above pocket binding sites of both proteins it was evident that these drug molecules were able to bind to any one of the sub sites of selected target proteins and inhibit AChE activity.

TABLE 2:  INTERACTION STUDIES EMPLOYED BY 1B41 PROTEIN THROUGH PYMOL: 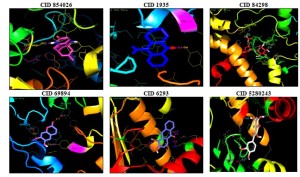 TABLE 4: PICTURE SHOWING THE INTERACTION BETWEEN 1B41 AND SELECTED LIGAND MOLECULE 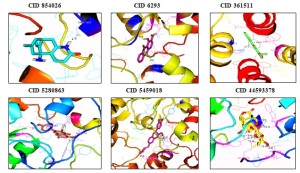 For the 25 drug molecules collected from Morinda citrifolia Linn., plant, the biological activity properties like molecular weight, hydrogen bond donars, H-bond acceptors and Log P value were predicted according to Lipinski rule of five which describe their ADME properties important for a drug’s pharmacokinetics in the human body. For this purpose, we used the tools like Osiris, Mol inspiration and PASS Prediction.

The OSIRIS Property Explorer is to draw chemical structures and calculate on-the-fly various drug-relevant properties whenever a structure is valid. Prediction results are valued and color coded. Properties with high risks of undesired effects like mutagenicity or a poor intestinal absorption are shown in red, whereas green color indicates drug-conform behavior.

Pass Prediction: It is possible with computer program to predict the Activity Spectra for Substances to predict the biological activity spectrum for a compound on the basis of its structural formula. PASS predicts 3678 pharmacological effects, mechanisms of action, Mutagenicity, Carcinogenicity, Teratogenicity and Embryotoxicity. All the best inhibitor compounds were analysed for their activity spectra using PASS.

TABLE 10: DATA GENERATED FOR SELECTED ANALOGUE, HUPERIZINE A FOR PREDICTION OF BIOLOGICAL ACTIVITY

DISCUSSION: Our present study discusses about the prediction of the biological activity for the phytoconstituents of the plant, M. citrifolia plant compounds. Through application of the CAST-p tool  which predict the pocket binding site of the selected protein Viz. , it was obvious that the following resedues were present in the active site of the proteins 1B41: Ser-203, Thr-83, Thr-238, Glu313,Gly-234, Arg-296, Tyr-337, Ser-125, Glu-202, Tyr-503, Gln-413, Asn-533, His-405, Trp-532 and in the protein 1N5R, the resedues were Ser-203,Gln-202,Tyr-133,Gly-120,Trp-86,Tyr-337, His-381, Asp-74,Tyr-124,Glu-202, Tyr 341,Tyr-133,Glu-71, Ser125. Based on these results it was inferred that the drug molecules will interact with the active sites of these two proteins and inhibit the activity of AChE levels in AD. Similarly, the results obtained through Osiris tool, it was understood that the drug molecule, Huperzine A has the highest drug score (0.58) and clog p, molecular weight, tpsa, druglikeness and solubility (Table 6 and 7). The molinspiration tool, one of the best activity predictor further supported that the drug molecule, Huperzine A with highest enzyme

activity (1.13) can inhibit the activity of AChE levels in AD. Then finally i predicted the PASS prediction ligand activity tool in these the drug molecule huperzine A shows Alzheimers disease treatment, dementia treatment and neurodegenerative disease treatment etc.,.

CONCLUSION: The results of the present study clearly demonstrated that the in silico molecular docking studies on selected  phytoconstituentsof the plant, Morinda citrifolia Linn., exhibited best binding interactions with both proteins of the neurotransmitter AChE. Based on these results, it will be possible to develop suitable AChE inhibitors for treatment Alzheimer’s disease.

ACKNOWLEDGEMENT: I thank the Co-ordinator, DBT-supported BIF Centre for providing the networking facilities to execute this research work.