INSILICO ANALYSIS OF VINCA ALKALOIDS AS ANTIMITOTIC AND ANTI-MICROTUBULE AGENTS: A POTENTIAL CURE FOR CANCER

INSILICO ANALYSIS OF VINCA ALKALOIDS AS ANTIMITOTIC AND ANTI-MICROTUBULE AGENTS: A POTENTIAL CURE FOR CANCER

ABSTRACT: Vinca alkaloids are a subset of drugs obtained from the Madagascar periwinkle plant, Catharanthus roseus and have hypoglycemic as well as cytotoxic effects. They are used for treating diabetes, high blood pressure and have been used as disinfectants. The vinca alkaloids are important for being cancer fighters, as they work by inhibiting the ability of cancer cells to divide. Upon acting on tubulin, they prevent the formation of microtubules, an essential component for cellular division. . There are four major vinca alkaloids in clinical use: Vinblastine (VBL), vinorelbine (VRL), vincristine (VCR) and vindesine (VDS). Vinblastine is most often used to treat breast cancer and germ cell tumors. Vinorelbine has exhibited significant antitumor activity in patients with breast cancer and anti proliferation effects on osteosarcoma (bone tumor cells). Vincristine is FDA approved to treat Wilm’s tumor, acute leukaemia and other lymphomas. Vindesine is used in the treatment of melanoma, lung cancers and uterine cancers. Vinflunine is used for the treatment of second-line transitional cell carcinoma of the urothelium. In the present study Tubulin Alpha-Beta was used for docking studies with the above said alkaloids. Auto dock binding energies and binding interactions of the Vinca alkaloids indicate that Vinblastine is the most probable inhibitor of   Tubulin Alpha-Beta.

INTRODUCTION: Microtubules (MT) are key cell structures found in eukaryotes that play a vital role in the organization of the spatial distribution of organelles throughout interphase and of chromosomes during cell division 1. Microtubules assemble from protofilaments built through longitudinal head-to-tail juxtaposition of tubulin heterodimers and tubulin are the most conserved proteins in eukaryotes GTP-bound tubulin heterodimers curve following hydrolysis of the GTP nucleotide 2. Since GTP hydrolysis accompanies MT assembly, and GDP-tubulin is released upon depolymerization, tubulin has to exchange its bound GDP with GTP in order to assemble again.

MT dynamics, and therefore cell division, can also be perturbed by small molecules, and this interference can lead to cell death 3. This antimitotic property is, in fact, exploited by a number of potent anticancer chemotherapeutic drugs, which are usually divided into two groups: (i) MT-destabilizing agents that prevent depolymerization, and (ii) MT-depolymerizing agents that inhibit MT formation. The former bind to polymerized MT, stabilize the M-loop that is responsible for lateral interactions between neighboring protofilaments, and prevent depolymerization even after GTP hydrolysis 4.

A common characteristic of these drugs is that they have two binding sites: an external site of lower affinity located at the MT pore to which they bind before being internalized to the lumen, and a higher-affinity luminal site located inside the MT 5, 6. MT-destabilizing agents such as vinca alkaloids bind to unpolymerized tubulin and block MT formation.

Vinca alkaloids are a material of a class of organic compounds made up of carbon, nitrogen, hydrogen and oxygen that is often derived from plants 7. Many alkaloids having toxic characteristics have physiological effects too that make them useful as medicines 8. The oldest group of the plant alkaloids groups that used to treat cancer are the vinca alkaloids 9. The main mechanisms of vinca alkaloid cytotoxicity is due to their interactions with tubulin and disruption of the microtubule functioning, particularly of microtubules comprising the mitotic spindle apparatus, directly causing metaphase arrest 10. The vinca alkaloids and other anti microtubule agents also have an effect on both non-malignant and malignant cells in the non-mitotic cell cycle 11.

The vinca alkaloids connect to binding sites on tubulin that they are separate from those of the taxanes, colchicine, podophyllotoxin and guanosine-5’-triphosphate 12, 13.

Binding occurs rapidly and can reverse too. There are nearly 16-17 high-affinity binding sites in each microtubule that located at the ends of a microtubule. Binding of the vinca alkaloids to these sites interrupts microtubule congregation, but one of the most significant effect of low drug concentrations can be decreasing the rates of both growth and shortening at the assembly end of the microtubule that can cause produces a “kinetic cap” and suppresses function 14. The disturbing effects of the vinca alkaloids on microtubule dimers, particularly at the ends of the mitotic spindle, which cause inhibition of metaphase, occur at drug concentrations below those that decrease microtubule mass 15.

The vinca alkaloids and other microtubule disrupting agents have power to inhibit malignant angiogenesis in vitro. For example, VBL with concentrations range from 0.1 to 1.0 pmol/L block endothelial proliferation and spreading of  fibronectin and chemotaxis, all essential steps in angiogenesis, 16 but other normal fibroblasts and lymphoid tumors were unaffected at concentrations this low. In combination with antibodies against vascular endothelial growth factor, minute doses of VBL increased antitumor response to a great extent 17. Vinca alkaloids inhibit cell proliferation by binding to microtubules, which can cause a mitotic block and apoptosis 18.

The vinca alkaloids have been generally included in combination with chemotherapy regimens for medicinal therapies.. Different vinca alkaloids Fig.1 have their own unique properties. 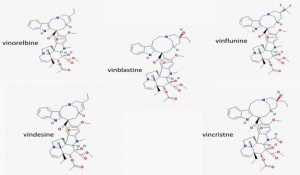 Vinblastine has been used as an integral part of medicinal treatment regimens for testicular carcinoma and both Hodgkin and non-Hodgkin lymphomas. Vincristine has been approved to treat acute leukaemia, neuroblastoma, rhabdomyosarcoma, Wilm's tumor, Hodgkin's disease and other types of lymphomas. Another characteristic of Vincristine that has been reported is treating several non-malignant hematologic disorders such as haemolytic uremic syndrome, refractory autoimmune thrombocytopenia and thrombotic thrombocytopenia purpura 19. Antineoplastic activity of VDS has been reported in acute lymphocytic leukaemia, blast crisis of chronic myeloid leukaemia, malignant melanoma, paediatric solid tumors and metastatic renal, breast, oesophageal and colorectal carcinomas 20.

The Vinca alkaloids bind to their binding sites in intact microtubules with different affinities depending on whether the binding sites are located at the microtubule ends or situated along the microtubule surface 21. Studies have shown that Vinorelbine has significant antitumor activity in patients with breast cancer and can be affected on osteosarcoma, bone tumor cells.

In addition, Vinorelbine decreases the stability of lipid bilayer membranes. In the United States, Vinorelbine has been approved for the initial treatment of patients with advanced lung cancer 22. Vinblastine treatment yields M phase specific cell cycle arrest by disrupting microtubule assembly and proper formation of the mitotic spindle and the kinetochore, each of which are essential for the separation of chromosomes during anaphase of mitosis. VBL inhibits angiogenesis which is how new blood vessels proliferate from pre-existing blood vessels. Angiogenesis is an essential step in a tumor’s transition to malignancy 23.

Preparation of protein and ligands:

The 3dimensional structure of TUBULIN ALPHA-BETA DIMER ((PDB ID: 1TUB) was obtained from protein database PDB 24. The vinca alkaloids were obtained from NCBI PubChem 25. The ligands were obtained in sdf format and converted into PDB file using Spdbv26.The CID numbers of the selected ligands are 13342(vinblastine), 5978(vincristine), 6918295(vinflunine), 5311497 (vinorelbine) and 40839(vindesine).  The properties of these vinca alkaloids were retrieved from PubChem.

The computed properties including molecular weight and XlogP3 value were obtained from PubChem Table 1.

Based on the molecular weights of these compound which exceeded 500g/mol, the prescribed route of administration was best sought to be intravenous. 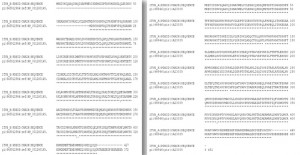 The active site residues of 1TUB as obtained from PDB are Thr276, His229, Phe272, Pro360, Gly370, and Val23. The binding mode of 1TUB and vinca alkaloids were analyzed by the docking studies using Discovery Studio Fig.3. 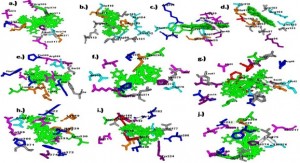 The binding energy and binding interactions of these solutions were analyzed Table 2.

CONCLUSION: Considering the above parameters, Vinblastine was found to be the best

compound interacting with the tubulin protein and inhibiting microtubule formation and can be considered for the treatment of cancer.

ACKNOWLEDGEMENTS: We thank the management of Sreenidhi Institute of science and Technology for providing necessary infrasture and support to carry out this work.