INVESTIGATION OF ANTIMICROBIAL AND ANTI-INFLAMMATORY ACTIVITY OF CURCUMA LONGA

INVESTIGATION OF ANTIMICROBIAL AND ANTI-INFLAMMATORY ACTIVITY OF CURCUMA LONGA

INTRODUCTION: Plants used as traditional medicines are a source of wide range of substances which can be useful to treat infectious or other serious diseases and are used for medicinal purposes from long since 1. Huge research works are conducting now to screen potential antimicrobial or other therapeutically useful substances from plants. Curcuma longa one of the widely used traditional medicine source (Family- Zingiberaceae, Popular in Bangladesh as Holud) is a perennial herb with pupy, orange, tuberous roots cultivated extensively in Asian countries like Bangladesh, India and China 2, 3. Zingiberaceae family constitutes a vital group of rhizomatous medicinal and aromatic plants characterized by the presence of volatile oils and oleoresins. Generally, the rhizomes and fruits are aromatic, tonic and stimulant; occasionally they are nutritive. Some are used as food as they contain starch in large quantities while others yield an astringent and diaphoretic juice.

Cucuma longa (turmeric) is used extensively as spice, preservative and coloring agent in India, China & South East Asia 5. It is also used locally for home made remedy for various diseases. Curcumin (diferuloylmethane), the main yellow bioactive component of turmeric has been shown to have a wide spectrum of biological actions: Antioxidant effects, Hepatoprotective effects, Anti-inflammatory effects, Anticarcinogenic effects, Antimicrobial effects and Cardiovascular effects 2, 6-8. Here, we have re-investigated the Antimicrobial activity and Anti-inflammatory activity of crude Curcuma longa and searched for new compounds other than the known compounds using chromatography.

Plant Material. Curcuma longa (rhizome) was collected from a village in the district of Comilla and was identified by Bangladesh National Herbarium (BNH) Reference no:-35157, and identification no.-BK-01. The rhizomes were washed by fresh water. All dust and other contaminants were removed and the rhizomes were cut into very thin slices. The slices were then taken in a fresh big sheet of white paper and sun dried for several days until the slices become fully dried and crispy. The dried slices of turmeric were then powdered using the grinder.

Extraction and isolation. The sample of Curcuma longa was extracted by cold extraction process 9. About 169 gram of powdered turmeric was taken in a beaker, then dissolved with methanol (99.99%). Total 500 ml of methanol was added in three different times. And extraction of 213.4 gm of methanol + turmeric extract was collected by filtering the mixer of turmeric and methanol. Evaporation of the methanol from turmeric extract was done by rotary evaporator. (RPM: 70 and Temperature: 37-45oC).

Chromatographic Analysis. Two different types of chromatography were performed in this study.

(a)   Thin Layer Chromatography (TLC) and;

At first the column was rinsed by n-Hexane, and then purified cotton was placed in the bottom of the column tube, and then the silica gel was added to the n- hexane, and poured in the tube. Sample with some silica gel and some chloroform was mixed and after then the chloroform was evaporated by rotary evaporator, and then poured on the silica column settled in the column tube. With the help of different solvent system (supplementary table 1 & 2) we have separated different compound based on polarity difference of those compound in the sample. The compound in the sample showed different bands of color based on polarity with different solvent system, the separated band was collected in 57 different test tubes, and TLC of each fraction was done for confirming the number of compounds in a band separated. Four different spots were found with same Rf value in nine test tubes when TLC was done. The contents of test tubes were mixed and a second column chromatography was performed, where four different fractions named D1, D2, D3 and D4 were collected. Among these fractions only D1 fraction showed significant antimicrobial activity, therefore included in further analysis.

(b)    1µg of sample dissolved in Methanol and NaOH, and;

Antimicrobial Test: Crude extract of turmeric was measured in analytical balance, and dissolved in chloroform in a specific concentration 10 µg/µL.  The liquid form of sample was made for optimal concentration of dose in each paper disk. The desired disk concentration was 500 µg, 200 µg, 100 µg. 14 different bacterial strains were used in our study to perform antimicrobial test (Table 1). All the strains were cultured from the mother strains as a stock culture in vials, and then they were re-cultured in petri dishes, then the paper disks were prepared with specified concentration of sample. Prepared disks were put on the 3 specified places in the plate with positive control (Penicillin paper disk). The samples were given at 500 µg, 200 µg, and 100 µg concentrations for crude and for single compound (D1) fraction 50 µg, 20 µg and 10 µg of concentrations were used.

Anti-inflammatory Test: The methanol extract of C. longa was used for anti-inflammatory test. The mice were 4-5 weeks old (weight: 23-28 gram) was divided into 5 groups for experimental use. They were purchased from the animal research branchof International Centre for Diarrheal Diseases Research, Bangladesh (ICDDR, B) 13. The mice were kept in standard condition and were given ICDDR, B formulated rodent food. The five groups were marked as (+)ve control, (–)ve control, sample-1(500 mg/kg), sample-2 (250 mg/kg), sample-3 (125 mg/kg). 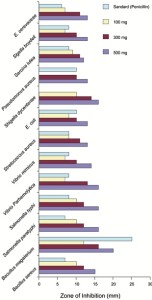 FIGURE 1: ANTIMICROBIAL ACTIVITY OF CURCUMA LONGA EXTRACT. Penicillin was used to compare the zone of inhibition of Curcuma longa extract. in many cases extract has shown better performance (larger zone of inhibition) than penicillin itself. color for different strength is shown in the figure at top-right corner. 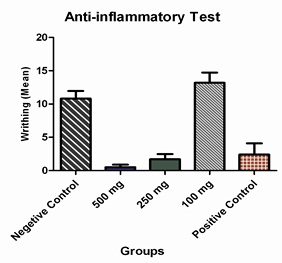 In the IR spectra peak for –OH was seen at 3466 cm-1, presence of olefinic proton was indicated by the peak at 2941 cm-1, no strong peak for carbonyl group was seen. Peak at 1602 cm-1 and 1490 cm-1 indicated the aromatic ring in the compound. UV spectra of the compound D1 showed strong absorption at 420 nm, (absorbance 0.091), in (D1 + methanol) preparation, which confirm conjugated system in the compound. Then another sample was prepared with (D1 + Methanol + NaOH), Peak was seen at 478 nm (absorbance 0.082), has shown hypsochromic shift, which indicate  aromatic –OH group is present and the shifting is due to ionization of aromatic –OH group. In another sample (D1 + Methanol + HCl) peak was seen at 426nm (absorbance 0.088) but no significant shifting of was seen. 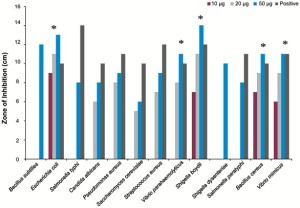 DISCUSSION: Crude C. longa extract has shown significant anti-inflammatory and antimicrobial action. Among the selected strains of bacteria used in this study only Bacillus megaterium didn’t show any significant inhibition when treated with C. longa extract. Other thirteen bacterial species showed larger zone of inhibition than standard (Penicillin), when 500 µg Curcuma longa was used. Curcumin is a compound found in Curcuma longa has been reported earlier for its wide spectrum antimicrobial activity by Rudrappa and Bais in 2008 14. Five bacterial species Shigella boydeii, shigella dycenteriae, Escherichia Coli, Salmonella typhi and salmonella paratyphi in this study used is responsible for intestinal infection 15. Therefore, an anti-diarrheal test was conducted on a mice model (Swiss Albino), but didn’t found any significant result so the result of that test is not included here. Furthermore, when zone of inhibition of D1 fraction compared with penicillin at 3 different concentration significant reduction of bacterial growth was found against five bacterial species; Escherichia coli, Vibrio parahaemolytica, Shigella boydii, Bacillus cereus and Vibrio mimicus (Figure 3).

No significant inhibitory zone was found in Salmonella typhi and Salmonella paratyphi bacterial culture. This result is different than the previous antimicrobial study, thus we concluded that, there may be a new compound in that fraction other than curcumin 16-17.

Infra red and UV visible spectroscopy were done for D1 fraction. From IR spectroscopic analysis of D1 compound –OH peak was found at 3466 cm-1, presence of Olefinic proton was indicated by the peak at 2941 cm-1. Peak at 1602 cm-1 and 1490 cm-1 indicate the presence of aromatic ring in the compound and no strong peak for carbonyl group was seen. Chemical analysis of D1 fraction through UV also confirmed the presence of –OH group, conjugated bond and aromatic ring in that compound.

CONCLUSION: C. longa had shown wide spectrum of antimicrobial activity and significant anti-inflammatory effect in our study. Isolation and chemical investigation of D1 fraction with its anti-microbial assay indicate that, this could be a new compound other than the compounds already found in C. longa. Further chemical and biological study needed to establish the actual structure and function of the compound, which was beyond the scope of our laboratory facilities. However, antidiarrhoeal activity of C. longa is not found to be significant.