INTRODUCTION:The function of skin is to serve as a protective barrier against the environment. Wounds are physical injuries that result in an opening or break of the skin.

After injury, the objective of wound healing is to restore structure and function to an injured tissue in order to approximate pre-wound characteristics. Healing is a complex and intricate process initiated in response to an injury that restores the function and integrity of damaged tissues.

Healing process can be broadly categorized into three stages; inflammatory phase (consisting the establishment of homeostasis and inflammation); proliferate phase (consisting of granulation, contraction and epithelialization) and finally the remodeling phase which ultimately determines the strength and appearance of the healed tissue 1.

Healing of a chronic wound requires care that is patient centered, holistic, interdisciplinary and should be cost effective and evidence based. Several natural products 3, plant products, which are composed of active principles, like triterpenes and alkaloids and flavonoids 4 and biomolecules 5 have been reported to promote the process of wound healing.

Diabetic wounds are slow, non-healing wounds that can persist for weeks despite adequate and appropriate care. Such wounds are difficult and tough to manage 6. Though the exact pathogenesis of poor wound healing in diabetic wounds is not clearly understood, evidence from studies involving both human and animal models reveal several abnormalities in the various phases of the wound healing process 7, 8.

Delayed and incomplete healing of wounds can be a major problem for diabetic patients. Macrophages are an important cell in the complex process of wound repair representing the major source of cytokines throughout the wound healing process.  Cytokines mediate many of the cellular responses critical to timely wound repair.  It has been suggested that diabetes impairs would healing through disruption of local cytokine production.

Previously it has been seen that platelet-derived growth factor B chain (PDGF-B) levels are deficient at the wound site of diabetic rats.  The diabetic condition was associated with a generalized reduction of macrophage cytokine release.

Murraya koenigii, belonging to the family Rutaceae, commonly known as curry-leaf tree, is a native of India, Srilanka and other south Asian countries. Leaves are rich in minerals, vitamin A, vitamin B, and are a rich source of carbohydrates, proteins, amino acids and alkaloids 10-11. The plant has also been used in traditional Indian medicine systems for a variety of ailments 12-13.

The present study has been undertaken to examine the wound healing potential of Murraya koenigii leaves aqueous extract in diabetic hyperlipidemic Wistar rats.

Extraction: The powder was extracted with distilled water using Soxhlet at boiling temperature (100oC) up to 10 h. A dark brown color extract is obtained. This dark brown extract was cooled and filtered to remove the residue. The extract was concentrated on rotavapor under reduced pressure and then finally lyophilized to get a powder weighing about 75g 16.

Preliminary Phytochemical Studies: The extract was then subjected to qualitative phytochemical screening for the identification of the phytoconstituents 18-20.

Animal: Adult male and female albino Wistar Rats (250-300g) were obtained from animal house facility of Sri Balaji College of Pharmacy, Jaipur. Animal House Facility of this division is approved by Govt. of India, under the Ministry of Environment & Forest (Reg. No. 1212/ac/08/CPCSEA).

Then all the animals were acclimatized at least under standard husbandry condition i.e., room temperature 24±1oC; relative humidity 45-55% and 12:12 hr light/dark cycle. The animal had free access to standard laboratory chow diet with water supplied ad libitum under strict hygienic condition. The rats were anaesthetized prior to and during infliction of the experimental wounds. The surgical interventions were carried out under sterile conditions using ketamine anesthesia (10 mg/kg body weight of an animal).

Animals were closely observed for any infection and those which showed signs of infection were separated and excluded from the study. The approval of the Institutional Animal Ethical Committee (IAEC) of Sri Balaji College of Pharmacy, Jaipur, was taken prior to start of experiments. All the protocol and experiment were conducted in strict compliance according to ethical principles and guidelines provided by Committee for the Purpose of Control and Supervision of Experiments on Animal (CPCSEA).

After the 2 weeks of dietary manipulation on the confirmation of hyperlipidemia in rats , a subset of the overnight fasted rats from each dietary group was injected intraperitoneally (i.p.) with low dose of STZ (35 mg/kg) while the respective control rats were given vehicle 0.1M citrate buffer (pH 4.5) in a dose volume of 1ml/kg, i.p., respectively 23.

The body weight and biochemical estimations (plasma glucose (PGL), triglycerides (PTG), total cholesterol (PTC), and LDL-c & HDL-c) were carried out just before and 7 days after the vehicle or STZ injection, i.e., on 3 weeks of dietary manipulation in rats. The rats with the fasting PGL of ≥200 mg/dl were considered diabetic and selected for further pharmacological wound healing studies. The feed and water intake of the animals were also measured.

The rats were allowed to continue to feed on their respective diets until the end of the study. The treatments of drugs were started after 7 days STZ injection on the confirmation of hyperglycemia in diabetic hyperlipidemic rats, it was considered as day 0 for further pharmacological activity.

Wistar rats were divided into six groups as above, each containing six animals and anesthetized with 1 ml of intravenous ketamine hydrochloride (10 mg/kg body weight). Dead space wounds were inflicted by implanting sterile cotton pellets (10mg each), one on either side in the groin and axilla on the ventral surface of each rat by the technique of D’Arcy et al. as described by Turner 25.

Animals were treated daily with drugs as per theirs grouping, from 0 day to 9th post-wounding day. On the 10th post-wounding day, the granulation tissue formed on the implanted cotton pellets was carefully removed under anaesthesia. After noting the wet weight of the granulation tissue, the tissue was dried at 60oC for 12 hr, and the dry granulation tissue weight was recorded. To the dried tissue 5 ml 6N HCl was added and kept at 110oC for 24 hr. The neutralized acid hydrolysate of the dry tissue was used for the determination of hydroxyproline 26.

The assay procedure for Hydroxyproline Content 26: Aliquots of standard hydroxyproline (2-20µg) prepared from stock solution and test samples containing hydroxyproline less than 10 µg/mL will be mixed gently with sodium hydroxide (2N final concentration) in a total volume of 50 µL. The sample will be hydrolyzed by autoclaving at 120oC for 20 min. 450 µL of chloramines-T will be added to the hydrolyzate, mixed gently, and the oxidation will be allowed to proceed for 25 min at room temperature. 500 µL of  Ehrlich’s aldehyde reagent will be added to each sample, mixed gently and the chromophore will be developed by incubating the samples at 65oC for 20 min. Absorbance of each sample will be re-added at 550nm using a spectrophotometer to find out concentration of hydroxyproline.

Statistical Analysis: Results were expressed as Mean ± Standard Deviation (SD). The data was statistically analyzed using the one-way ANOVA followed by Tukey-Kramer multiple comparison test to determine whether results in a particular group were significantly different from those in the corresponding control groups. Results were statistically significant when P values are less than 0.05 (P <0.05).

In acute toxicity studies, the extract in doses up to 2000mg did not produce any signs of toxicity and mortality. The animals were physically active and were consuming food and water in a regular way. No abnormal behavior was noticed. As no mortality was recorded within 24 hours during the acute toxicity test, LD50 could not be calculated.

In this study, very significant (p<0.001) result was found with 300mg/kg dose level because the effect was dose dependent up to 300mg equivalent of extract and there was no significant difference in between MK-300 & MK-400 mg/kg treated groups for Wet & Dry granulations tissue weight and hydroxyproline content (Table 1, Figure 1 & 2). 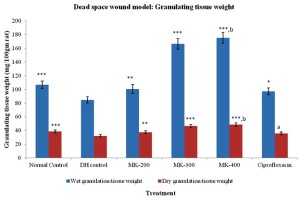 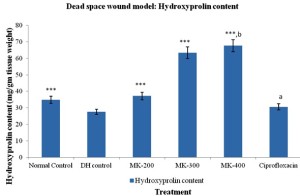 The extract in doses up to 2000mg did not produce any signs of toxicity and mortality. As no mortality was recorded within 24 hours during the acute toxicity test, LD50 could not be calculated. The non – toxic effect of the aqueous leaf extract of Murraya koenigii lend support to the widespread use of the plant as a spice for food flavoring. Collagenation,   wound   contraction   and epithelization are crucial phases of wound healing. The phases of inflammation, macrophasia, fibroplasias and collagenation are intimately interlinked.

Thus, an intervention into any one of these phases by drugs could eventually either promote or depress one, other or all phases of healing. Growth hormone is known to promote the healing process by enhancing epithelial cell proliferation and cell collagen formation. Collagen is the family of protein, which provide structural support and it is the main component of tissue such as fibrous tissue and cartilage. The collagen synthesis is stimulated by various growth factors 27. Growth hormone is also known to promote the proliferation of fibroblasts 28 and fibroblast proliferation form the granulation tissue.

Collagen is the predominant extracellular protein in the granulation tissue of a healing wound and there is a rapid increase in the synthesis of this protein in the wound area soon after an injury, which provides strength and integrity to tissue matrix. Measurement of this hydroxyproline, which comes from the breakdown of collagen, has been used as an index of collagen turnover. In the present study, the aqueous extract of M. koenigii showed dose-dependent faster healing and increased the wet and dry granulation tissue weight (epithelial cells proliferation) and the hydroxyproline (collagen formation) content of the granulation tissue indicating the presence of higher epithelial cell proliferation and collagen content and its turnover leading to rapid healing wounds.

Low dose of streptozotocin injection caused diabetes mellitus type-II, probably due to partial destruction of the cells of the Islets of Langerhans of the pancreas 29. This results in over-production of glucose and decreased utilization by the tissues, forming the basis of hyperglycemia in diabetes mellitus 30. The delay in diabetic wound healing, is due to interruption of cytokine release from macrophages, which may be due to the fundamental diabetic-hyperlipidemic condition

The preliminary phytochemical screening of extract of Murraya koenigii shows presence of mucilage, proteins, sterols and Triterpenoids, alkaloids, tannins, flavonoids, phenolic compounds. This wound healing activity of the extract observed might be due to the presence of phytochemicals present in the plant extract.

In conclusion, these preliminary investigations and data obtained from this study demonstrated that Murraya koenigii treatment increased granuloma tissue weight and hydroxyproline content in dead space wound in diabetic hyperlipidemic rats. The exact mechanism(s) by M. koenigii increased the granuloma tissue weight of granulation tissue and hydroxyprolin content in tissue cannot be explained with the present data.

ACKNOWLEDGEMENT: I take this privilege and pleasure to acknowledge the contributions of many individuals including my guide Prof (Dr.) Angshu Bandyopadhyay, Director, Sri Balaji College of Pharmacy, Jaipur, Management of CMJ University- Shillong and my wife Mrs. Priyanka Yadav, who have been inspirational and supportive throughout my work undertaken and endowed with the most precious knowledge to see success in my endeavor.