ABSTRACT: Objective of the present study is to investigate the chemical composition of methanol extract of stem bark of Ficus benghalensis Linn. (Indian Banyan Tree). Shade and air dried stem bark were powdered and extract was prepared according to selective sequential extraction using different solvents of increasing polarity. Methanol extract of stem bark of this plant was further subjected to gas chromatography and mass spectrometry as to the best of authors’ s knowledge no published literature exist about the characterization of chemical constituents of methanol extract by GC-MS technique. Total 63 compounds were reported by GCMS studies out of which two were never reported earliar. Qualitative and quantitative presence of different biologically important phytoconstituents were reported and two new phytoconstituents were investigated. Results of this study suggested the phytopharmacological importance of reported constituents of stem bark extract of Ficus benghalensis Linn. and justify the use of Ficus benghalensis Linn. in ancient literature of Ayurveda.

INTRODUCTION: Ficus benghalensis Linn. ‘The national tree of India’, is native to India and commonly known as Banyan tree 1. Its stem bark is greyish, hard, with uneven surface, on rubbing white papery flakes come out from the outer surface and inner surface is light brown without any characteristics odour 2 - 3. Traditionally, stem bark is used as antioxidant 4, anti-inflammatory 5 analegesic 6, antipyretic 6, antiasthmatic 7 and in wound healing 8. According to Ayurveda the bark of Ficus benghalensis Linn. is astringent and is useful in leucorrhoea, lumbago, sores and bruises 9.

Plant Sample: The plant material (stem bark) was collected from the campus of Guru Jambheshwar University of Science and Technology, Hisar in the month of February, 2016 and was Identified by Dr. Anjula Pandey, Principal Scientist, ICAR-NBPGR, New Delhi, vide reference no. NHCP/ NBPGR /2016-1, as Ficus benghalensis Linn.

Extraction: 100 g of shade and air dried stem bark were powdered and different extracts were prepared according to selective sequential extraction using solvents of increasing polarity in order of petroleum ether, chloroform, methanol and distilled water in soxhlet extractor. Percentage yield of methanol extract was calculated and was stored in dessicator for further use.

Identification of Phytoconstituents: Bioactive phytoconstituents extracted from methanol extracts of Ficus benghalensis Linn. were identified based on GC retention time on column and by matching of this with computer software data of standards from National Institute of Standards and Technology (NIST) and Wiley Library. Molecular weights were calculated by mass spectroscopy.

Physical Properties of Extracts: Methanol extract of Ficus benghalensis Linn. was brown in colour and after fluorescent study of extracts, colour changes to dark brown when viewed under short UV(254 nm) and black when viewed under long UV(365 nm) .

Phytoconstituents Reported in Extract after GC -MS: Bioactive compounds present in methanol extract of stem bark of Ficus benghalensis Linn. are shown in table no.1and as chromatogram in Fig. 1. Identification and characterization were based on their elution order in 5 Sil MS column. Elution time, molecular formula and the percentage of these phytoconstituents are also shown in the Table 1. 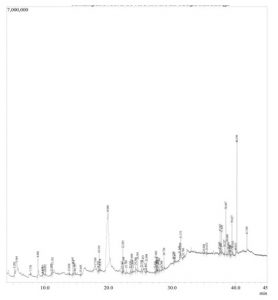 Quinic acid (37%), α-Amyrin (4.49%), Androstan-17-one (5.53%) Lupeol acetate (2.67%) and Diglycerol (2.74%) were reported in majority according to chromatogram area percentage (Fig. 2-6). Total 63 compounds were present and two new compounds were also found in the chromatogram as their peak does not match (Fig. 7 and 8) with any compound in NIST and Wiley library. Some important phytosterols like fucosterol, lanosta-8, 24-dien-3-one, stigmasterol were present in traces. A large no. of fatty acids and their esters (8-Octadecanone) has also been identified. Tri-terpenoids like lupeol acetate, Terpenoids(α-Amyrin) were also been identified. 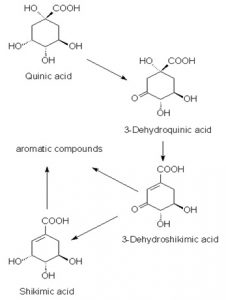 FIG. 9: QUINIC ACID IS SUGAR ACID AND STARTING MATERIAL FOR SYNTHESIS OF AROMATIC COMPOUNDS IN PLANTS

DISCUSSION: Chemically, quinic acid is sugar acid and starting material for synthesis of aromatic compounds in plants (Fig. 9). In a comparative study, quinic acid has been reported to be having greater anticancer potential than curcumin based on in silico study of compound 16. It is reported to exhibit antitumor activity without inducing normal cell death 17.  Another study report about significant increases in number of spleen lymphocyte cells by quinic acid 18. Hepatoprotective activity of quinic acid is reported by suitable animal models 19. Quinic acid is an antioxidant compound 20. Chemically, quinic acid is cyclic polyol in nature suggesting that the six-carbon ring structure bound to a carboxylic group plays an important role in the action of polyphenols. Androstan-17-one produces antiobesity and tumor chemopreventive activity 21. α- Amyrin show anxiolytic, analgesic, anti-inflammatory and antidepressant effect 22. It is pentacyclic triterpenoid in nature 23.

Another pentacyclic triterpenoid or phytosterol (Lupeol acetate) have a wide spectrum of biological activities 24. In a study, lupeol acetate presents an anti-inflammatory activity in animal model by TNF-alpha and IL-2 specific mRNA regulation 25 - 26. Diglycerol fatty acid esters were successfully investigated for their antibacterial activity 27. Similarly other major phytoconstituents are also antioxidants in nature. Antioxidants are the substance responsible for treatment of various diseases like diabetes, cancer, inflammation etc 28.

CONCLUSION: The existing knowledge regarding its phytoconstituents may be increased by the present phytochemical investigation as the two new phytoconstituents were reported from the GC-MS chromatogram of methanol extract of the stem bark of Ficus benghalensis Linn. This plant has been used in the traditional Indian System of Medicine since long time, presence of maximum phyto-constituents reported by present study also justifies the use of stem bark of Ficus benghalensis Linn. in various diseases.

ACKNOWLEDGEMENT: Study received financial support from DST, Government of India in form of DST-INSPIRE fellowship with registration no. IF140587.We would like to acknowledge JNU, AIRF Centre for providing the necessary instrumentation.