INTRODUCTION: Leucas aspera (Lamiaceae) is an annual, branched herb, erecting weed to a height of 15-60 cm with stout and hispid acutely quadrangular stem and branches. This weed is distributed throughout India from Himalayas down to Ceylon 1. This weed is used traditionally as antipyretic and insecticide. Bruised leaves are applied locally in snake bites 2, 3.

In this investigation, a detailed study was carried out on regional variation in total phenolic and alkaloid contents of the alcoholic extracts of L. aspera collected from different regions of Andhra Pradesh like Tirupathi, Lam, Hyderabad and Jagityala, and were screened for in vitro free radical scavenging activity of superoxide radical, Hydroxyl radical and DPPH radical.

Preparation of Extract: The freshly collected leaves of the plant were shade dried and powdered. The powdered material was then subjected to triple maceration with methanol: water (70:30). The extract thus obtained was concentrated under vacuum at temperature of 43oC by using rotary evaporator (Buchi), dried completely, weighed and stored in desiccators.

Total Phenolic content: Total phenolic content was estimated as GAE (GA equivalents) as described by Singleton, Orthofer and Lamuela-Raventos, 1999 12. Briefly, 100µl aliquot of dissolved extract was transferred to 10ml volumetric flask containing 6.0ml ultra pure water, to which was subsequently added 500µl undiluted Folin-Ciocalteu reagent. After 1min, 1.5ml 20g/100ml sodium carbonate was added and the volume was made up to 10ml with ultra pure water. After 30 minutes incubation at 25oC the absorbance was measured at 760nm and compared to GA calibration curve. All experiments were performed thrice; the results were averaged and reported in the form of Mean ± S.E.M (Table 1).

Total Alkaloid Content: Total alkaloid content was determined by the Fazel et al., 2008 method 13.The plant extract (1mg/ml) was dissolved in 2 N HCl and then filtered. The pH of phosphate buffer solution was adjusted to neutral with 0.1 N NaOH. One ml of this solution was transferred to a separating funnel and then 5 ml of Bromocresol green solution along with 5 ml of phosphate buffer were added.

The mixture was shaken and the complex formed was extracted with chloroform by vigorous shaking. The extracts were collected in a 10 ml volumetric flask and diluted to volume with chloroform. The absorbance of the complex in chloroform was measured at 470 nm. All experiments were performed thrice. The results were averaged and reported in the form of Mean ± S.E.M. (Table 1).

In-vitro Antioxidant Activity: The alcoholic   extracts of Leucas aspera from four regions were screened for free radical scavenging activity against Superoxide radical, Hydroxyl and DPPH radicals at different concentrations. The Percentage Inhibition and 50% Inhibition Concentration’s (IC50) were calculated. All experiments were performed thrice and the results were averaged.

Superoxide Radical Scavenging Activity: Superoxide radical scavenging activity of the extract was measured according to McCord and Fridovich method, 1969 14. It depends on light induced superoxide generation by riboflavin and the corresponding reduction of nitroblue tetrazolium. All the solutions were prepared in phosphate buffer (pH 7.8). The optical density was measured at 560nm.

Hydroxyl Radical Scavenging Activity: Hydroxyl radical scavenging activity was measured according to the method of Elizabeth and Rao, 1990 15, by studying the competition between deoxyribose and test extract for hydroxyl radicals generated by Fenton’s reaction. The damage imposed on deoxyribose due to the free radicals was determined calorimetrically by measuring the thiobarbituric acid reactive substances (TBARS) at 532 nm.

DPPH Radical Scavenging Activity: DPPH radical scavenging activity was measured according to the method of Braca et al., 2003 16. An aliquot of 3ml of 0.004% DPPH solution in ethanol and 0.1ml of plant extract at various concentrations were mixed and incubated at 37˚C for 30 min. and absorbance of the test mixture was read at 517nm.

Calculation of Percentage Inhibition: The percentage inhibition of superoxide production by the extract was calculated using the formula:

Statistical Analysis: Values were expressed as means ± standard deviation. Analysis of variance was conducted and differences between variables were tested for significance by one-way ANOVA and linear regression analysis was used to calculate IC50 values. All determinations were done at least in triplicate and all were averaged. 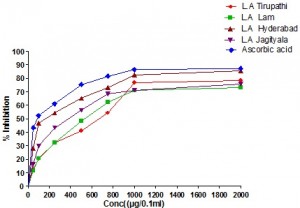 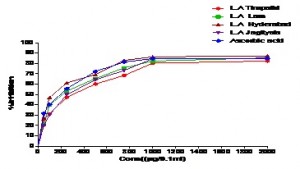 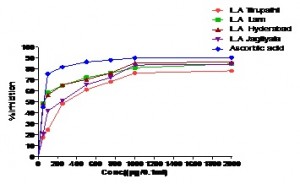 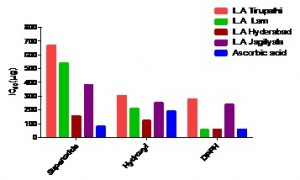