ABSTRACT: The present study aims to explore the ethnomedicinal knowledge of the plants and their preparations used to cure diabetes by the tribes of Mananthavady, Bathery and Vythiri taluks of Wayanad district, Kerala. Preparation of ethnomedicine using various plant parts and other information related to tribes associated; habitat, habit and status of medicinal plants recorded are highlighted. Documentation of indigenous knowledge related to cure diabetes was made by interaction with traditional healers. A total of 23 species belonging to 17 families possessing antidiabetic property were recorded. The review of literature revealed that 16 species have already been proven to be antidiabetic through scientific analysis. However reports on antidiabetic properties of Andrographis wightiana T. Anderson & Thwaites, Psilotrichum elliotii Baker & Clarke, Solanum violaceum Ortega ssp. multiflorum (Clarke), Justicia trinervia L., Dracaena terniflora Roxb., Elaeagnus conferta Roxb. and Kydia calycina Roxb. are lacking. The present study is successful in identifying seven medicinal plants used by the tribes for possessing antidiabetic activity. Most of the herbal preparations for curing diabetes were prepared from the fruits followed by leaves and bark.

INTRODUCTION: Diabetes Mellitus (DM) is caused by the deficiency or ineffective production of insulin by pancreas which results in increase or decrease in concentrations of glucose in the blood. It is found to damage many of the body systems, particularly the blood vessels and nerves 1. It is defined on the basis of laboratory findings as a fasting venous plasma concentration greater than 140 mg/dl or 210 mg/dl two hours after a carbohydrate meal or two hours after the oral ingestion of the equivalent of 75mg of glucose.

DM is the common endocrine disorder that is projected to become one of the world’s main disabler within next 25 years 2 and is considered to be a silent killer, affecting more in Asia and Africa with rise by two to three folds by 2030 3. The modern medicines available for management of diabetes exert serious side effects such as hepatotoxicity, abdominal pain, flatulence, diarrhea and hypoglycemia 4. Drug resistance to these medicines is also reported after prolonged treatment. Therefore, apart from currently available therapeutic options many herbal medicines have been recommended for treatment of DM 5.

Collection of information and documentation of traditional knowledge plays an important role in scientific research on drug development 6. A study of WHO depicts that over 80% of world’s population depends on biological resources for their primary healthcare demands 7. Over the centuries, Indian herbal drugs have served as a major source of medicines for the prevention and treatment of many diseases including Ethnobotany embraces a complex relationship between plants, people and culture and this relationship between plants and human cultures is not limited to the use of plants for food, clothing and shelter but also includes their use for religious ceremonies, ornamentation and health care. It is estimated that more than 800 species of plants exhibit hypoglycemic properties, including many common plants, such as bitter gourd and guduchi 8.

Natural medicines are also used in the traditional Chinese medical system for therapy of DM 9. In India, indigenous remedies have been used in the treatment of DM since the time of Charaka and Sushruta (6th century BC) 10. Also ayurveda and other Indian traditional practices mention the use of plants in treatment of diabetes 11. However, traditional knowledge, derived empirically, has to be supported by scientific testing. Experimentally several reports have confirmed the efficacy of traditional preparations claimed to be effective in the treatment of diabetes 12 and several herbs have shown antidiabetic activity when assessed with the available experimental techniques 13. Further screening of these plants revealed wide array of plant derived compounds with consistent antidiabetic activity and have proven their possible use in the treatment of DM 14.

In view of this, documentation of indigenous knowledge is vital for conservation of bioresources for their sustainable utilization and management of diabetes and its related complications. The exploration and field visits to Mananthavady, Bathery and Vythiri taluks of Wayanad district, Kerala was focused to unravel the traditional medicinal practices among the tribes. 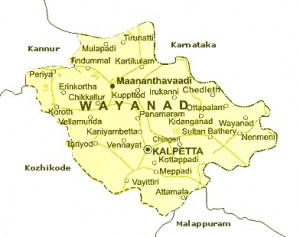 The total survey was focused on the interviews with tribal medical practitioners of tribal pockets of Mananthavady, Bathery and Vythiri taluks of Wayanad district, Kerala. Data was collected through interaction and interview with traditional healers and questionnaires. The exploration in these areas was focused to unravel the traditional medicinal practices among the tribes. Details of medicinal plants used, mode of treatment, methods of preparation and administration were documented. Information was also obtained from patients regarding the ethno-medicines used. The plants were identified and voucher specimens were deposited in Department of Studies in Environmental Science, University of Mysore, Mysore, Karnataka, India.

A total of 23 plant species belonging to 17 families were documented and identified as herbal remedies for diabetes (Table 1). Most of the species belonged to Zingiberaceae followed by Acanthaceae, Solanaceae and Cucurbitaceae. However, plants like Alangium salvifolium, Andrographis paniculata, Aporosa lindleyana and Gymnema sylvestre were more frequently used by the people in the area. Many remedies were prepared as mixtures of multiple ingredients. From the data, it was observed that 60% of the tribal medicine was prepared from fresh plant materials followed by dried and boiled plant materials (40%) for treatment.

TABLE 1: THE ETHNO MEDICINES USED BY THE TRIBES FOR THE TREATMENT OF DIABETES

diaphragm and white foamy urine, where as they have least knowledge on possible causes of this disease. Among the different plants documented fruits of Alangium salvifolium, Diospyros malabarica, Elaeagnus conferta, Helicterus isora and Solanum violaceum, rhizome of Alpinia galanga, dried leaves of Andrographis paniculata, root powder of Aporosa lindleyana, whole plant of Dracaena terniflora and seed powder of Solanum  torvum are commonly used by the different tribes.

It was also observed that different parts of the plants are exploited as cure for diabetes, out of which fruits (35%) were major ingredients in preparation of herbal formulations followed by leaves which constituted 22%, while bulbs, whole plant, rhizome, root, seed and bark were rarely used. The commonest method of herbal preparation was infusion. This is made by boiling pulverized or loose plant materials in water. Application of the herbal remedies was generally by drinking, usually on daily basis for long period of time. Andrographis paniculata and Dracaena terniflora were frequently mentioned and highly recommended by all the traditional healers and rural dwellers. Review of literature revealed that biological activities of A. paniculata is already available where as D. terniflora need to be subjected for further experiments to prove its efficacy.

Andrographis paniculata has been effectively used in traditional Asian medicines for centuries. It’s perceived “blood purifying” property results in its use in diseases where blood abnormalities are considered to be cause for diseases such as skin eruptions, boils, scabies and chronic undetermined fevers 16. Immuno-modulatory activity, antioxidant activity, anti-inflammatory activity, cytotoxic activity, antidiabetic activity, antimalarial, antihypertensive, antimicrobial, antifertility activities and also the adverse reactions through toxicity assay of this plant has been thoroughly reviewed by Dey et al., 17. Even the thorough review on genus Andrographis and pharmacologically relevant compounds of different species of Andrographis characterized so far is available 18. Dracaena terniflora is recently reported for its use against bed sore 19.

Thorough review of literature revealed that among 23 plants used by the tribes, 16 have been proven antidiabetic through further experiments (Table 2), where as reports on antidiabetic nature of Andrographis wightiana, Dracaena terniflora, Elaeagnus conferta, Kydia calycina, Justicia trinervia, Psilotrichum elliotii and Solanum violaceum is not available. The present study hence is successful in identifying six candidate plants which can be exploited further for antidiabetic treatment and also pharmacological studies to identify the molecules responsible for the desired activity.

TABLE 2: PLANTS USED BY THE TRIBES REPORTED TO POSSESS ANTIDIABETIC ACTIVITY IN VITRO AND IN VIVO.

Elaeagnus conferta is an edible herb found in Vietnam, Malaysia, India and South China. Its roots, leaves and fruits have been used in traditional Tibetan, Mongolian and Uygur medicine for the treatment of indigestion 20. The potential use of dry fruit of this plant for activating hepatic alcohol dehydrogenase, aldehyde dehydrogenase and accelerating blood alcohol clearance was reported by Wu et al., 21. Total phenolic content and its antioxidant activity were reported by Singh et al., 22.

Kydia calycina is distributed in tropical Himalayas from the Indus eastwards to Myanmar (Burma) and in peninsular India. Traditionally it is used to treat jaundice, skin diseases, ulcers, body pains, arthritis and lumbago 23, 24. The leaves of the plant showed analgesic and anti-inflammatory effect 25, 26. Similar such studies on the leaves have been proven to possess hepatoprotective potential 27. The use of stem bark and leaf paste for skin diseases and ulcers by Chenchus were reported by Ramarao and Henry 28. Flowers of K. calycina are rich in potassium and iron and were found inhibitory to Streptococcus mutans 29. Recently methanolic extract was reported to possess significant antioxidant activity 30, where as its antidiabetic activity has not been reported by earlier workers.

Antidiabetic activity of leaves and root extracts of Justicia adhatoda was reported by Gulfraz et al., 31. In our investigation it was found that Justicia trinervia is being used by the tribes for treating diabetes which was not reported by earlier workers till date.

Antibacterial and antifungal activity of Psilotrichum elliotii 32 and anticholinesterase 33, antioxidant and antimicrobial activity of Solanum violaceum 34 is available, whereas use of this plant for treatment of diabetes by the tribal people is reported for the first time from the present study.

The use of herbal medicines for the treatment of diabetes mellitus has gained importance throughout the world. The World Health Organization also recommended and encouraged this practice especially in countries where access to the conventional treatment of diabetes is not adequate 35. Hypercholesterolemia and hyper triglyceridemia are common complications of diabetes mellitus in addition to hyperglycemia 36, 37. The frequency of hyperlipidemia in diabetes is indeed very high, depending on the type of diabetes and its degree of control 38. There is an increased demand to use natural products with antidiabetic activity due to the side effects associated with the use of insulin and oral hypoglycemic agents since 1990 39-41. The available literature revealed that there are more than 400 plant species having hypoglycemic activity. Though some of these plants have great reputation in the indigenous system of medicine for their antidiabetic activities, many remain to be scientifically established including seven plants identified in the present study.

ACKNOWLEDGEMENTS: The authors are highly grateful to the tribal medical practitioners of Wayanad district Kerala and the taxonomists of M.S. Swaminathan Research Foundation, Kalpetta.