ABSTRACT: Saponins are the foam producing secondary metabolites of plant. They have been evaluated for a number biological activities like anticancer, anti-inflammatory, hepatoprotective, antimicrobial, antitumor, blood cholesterol lowering properties etc. In the present study we have attempted to check the role of isolated saponins from Asparagus filicinus for its hypolipidemic activity. Saponin rich fraction of Asparagus filicinus was extracted by microwave assisted extraction technique. Phytochemical analysis and characterization was performed using FTIR technique comparing it to the standard spectra of saponins. Preliminary anti hyperlipidemic activity was evaluated using Triton WR 1339 model. This experiment shows significant reduction in total cholesterol, triglycerides, LDL and HDL level in comparison with Atorvastatin standard drug.

INTRODUCTION: Saponins are plant glycosides and have diverse structural features. They are common in a variety of higher plants and usually found in roots, tubers, leaves, blooms or in some cases in seeds. They may contain a steroid, steroid alkaloid or triterpene core structure, the so-called aglycone. The steroidal aglycone consists of 27 C-atoms while the triterpenoidalaglycone has 30 C-atoms. The saponins with a steroid alkaloid as aglycone are similar to those with a steroidal aglycone but contain additional nitrogen atoms within the core structure. 1 The saponin forms a cage-like structure together with membrane cholesterol present in the cellular membranes, this has been exploited in the formulation of immune stimulating complexes (ISCOMS).

Moreover studies have demonstrated that for this adjuvant action of saponin, cholesterol is essential for its adjuvant function 2.

Hyperlipidemia leads to artherosclerosis, which is one of the major causes of death in the world according to numerous health reports. In India, artherosclerosis is shaping to be a major disease mainly due to the changing life styles and increasing stress. Population studies and clinical trials have shown a strong relation between hyperlipidemia and coronary heart diseases. 3 An increase in coronary heart disease is associated with a high serum concentration of total cholesterol, low density lipoprotein (LDL) cholesterol and triglycerides (TG). 4

In some cases there are positive reports of the beneficial effects of saponins in the treatment of hyperlipidemia. Asparagus filicinus Buch-Ham ex D, Don (Asparagaceae) commonly known as fern asparagus is a perennial plant producing erect stem 50-70 cm long from a rhizomatous root stock.

The flowers are dioecious (individual flowers are either male or female, but only one sex is to be found on any one plant so both male & female plant must be grown if seed is required) and are pollinated by bees. 5

The plant is harvested from the wild for local use as a food and medicine. It is sometimes grown as an ornamental plant in gardens. It is commonly found in loose humus rich soils in forest, 1700-2700 m in the Himalayas, forest, thickets, shady and moist places along valleys, at elevation from 1200-3000 m in Western China.5

The dried root of this plant has been reported for its usage as antipyretic, antitussive, diuretic, expectorant, stomachic, nervous stimulant and tonic. Steroidal saponins are generally considered pharmacologically important. 6

MATERIAL AND METHODS: Plant material (Collection and Authentication). The tuberous root of Asparagus filicinus were collected from the local ayurvedic drug market, Nayaganj, Kanpur (U.P.).  The drug was authenticated and identified according to the reported botanical specifications at the Department of pharmacognosy, Advance Institute of Biotech & Paramedical Sciences, Kanpur.

Preparation, extraction of drug and separation of saponin: The tuberous part of plant Asparagus filicinuswas selected for the hypolipidaemic activity, the roots were cleaned washed properly and dried under the shade, and the dried roots were coarsely grounded in a mixer. Grounded root powder drug was defatted by the petroleum ether (60-80°C). Now the drug was allowed to be extracted by ethanol. This ethanolic extract was suspended with double distilled water (100 ml) in microwave for 180s. For the removal of fibrous impurities the raw extract was passed through 10 micron mesh for filtration in hot condition. Thereafter, n- Butanol (300ml) was added to the filtrate and it was kept aside kept for few hours. Finally, di ethyl ether was added into it (2ml). This addition of solvent leads to the separation of saponins from the filtrate part in the form of creamy lump. These lumps was separated and passed through dialysis membrane into the water for isolation of the high molecular weight saponins according to the previously reported method. 7

Foam test: Foam test was performed to evaluate the preliminary presence of saponins before beginning with the detailed phytochemical analysis. 8

FTIR Spectroscopy analysis of saponins: A carefully weighed quantity of saponin was subjected to FTIR analysis. It was centrifuged at 10,000 rpm for 15 minutes and the pellet was washed three times with 20 mL of deionized water. The resulting purified suspension was completely dried and ground with KBr pellets and analyzed by FTIR. 9

Acute toxicity study: This study was designed in a manner to establish dose dependent hypolipidemic activity of different doses of the same saponin under same sets of conditions and different serum lipid parameters were compared with standard & other groups. Therefore a dose of 100 mg/kg body weight (i.p.) of saponins was administered to the group animals.

Animals were divided into following groups of six animals each.

Group I: control (without any drug treatment, given food and water intermittently)

Effects in Triton-induced hyperlipidemic rats: The antihyperlipidemic effects of the above extracts were evaluated in Triton-induced hyperlipidemic rats starved for 18 hr. The rats were divided into 4 groups of 6 each and then injected, with Triton at a dosage of 200 mg/kg body weight i.p. except rats of Group I, which served as normal vehicle treated. Group II is Triton control treated (200 mg/kg body weight). Group III were treated daily with saponin in 100 mg/kg, respectively immediately after the Triton injection. All animal groups were deprived of food over-night and Blood samples was withdrawn from the plexus of eye vein after 6, 24 and 48 hr of Triton injection 11, 12, 13 and transferred directly into the centrifuge tubes and allowed it to coagulate at room temperature. Then the blood samples were centrifuged for 30 minutes at the rate of 2000 rpm. Supernatant clear serum was obtained and transferred carefully with the help of micropipette into micro centrifuge tubes for estimation of biochemical parameter. Biochemical parameters such as total cholesterol, triglycerides level, HDL 14, 15 were measured by standard reagents kit using autoanalyser (Espin Diagnostic analyzer) in the Advance Institute of Biotech & Paramedical Sciences, Kanpur.

Statistical analysis: The mean values ± standard deviations were calculated for each group and time interval and compared statistically with the controls. The data are expressed as mean ± SEM and expressed for significance by Dunnet’s test (comparing all versus control) using Instat v. 202 software (GraphPad software Inc.) residing in Pentium IV processor run on Windows Xp.

Foam test: Foam test of separated saponin was found to be positive.

Effect of Triton WR 1339 on lipid parameters in albino rats: Triton WR 1339 is a non-ionic polyoxy ethylene phenol which is mainly used as a surfactant and it effectively elevates the lipid profile in various experimental models. It generally results in a biphasic elevation of plasma cholesterol and triglycerides levels respectively. In control group I shown normal values of lipid parameters such as total cholesterol, triglycerides, HDL- cholesterol, LDL and VLDL etc at a time interval of 0,6, 24 and 48 hrs respectively. In the case of triton control (group II) it shown significant increase in lipid parameters at a time interval of 6, 24 and 48 hrs respectively when compared with control (Table 1 and Table 2).

TABLE 2: EFFECT OF SAPONIN ON HDL AND LDL IN TRITON-INDUCED HYPERLIPIDEMIC RATS [VALUES, EXPRESSED AS mg/dl, ARE MEAN ±SE OF 6 ANIMALS IN EACH GROUP] 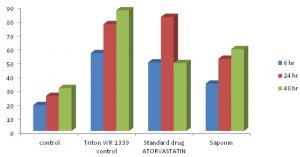 DISCUSSION: Triton is basically a surfactant and inhibits the lipases action by blocking the uptake of lipoproteins from circulation by extra hepatic tissues which causes increase in blood lipid concentration. 16 Present research reflects the fact that the saponin part of Asparagus filicinus reduces the cholesterol, LDL and triglycerides level in a

manner similar atorvastatin. Triton induces hyperlipidemia by increasing the hepatic synthesis of cholesterol and triglycerides. 17, 18 Asparagus filicinus possess hypolipidemic activity which may be ascribed to its saponin fraction.

CONCLUSION: Above findings reveals that Asparagus filicinus saponin possess hypolipidemic activity. Hence, further research related with saponin purification and characterization is required; moreover identification of a specific target molecule would be highly useful in identifying the other underlying mechanism of action.

ACKNOWLEDGEMENT: The authors are thankful to the management of Advance Institute of Biotech & Paramedical Sciences, for facilitating lab for us to carry out the research work.