ION EXCHANGERS: A USEFUL TOOL FOR SEPARATION AND SIMULTANEOUS PURIFICATION OF LYSOSOMAL CYSTEINE PROTEINASES, CATHEPSINS B, H AND L.

ION EXCHANGERS: A USEFUL TOOL FOR SEPARATION AND SIMULTANEOUS PURIFICATION OF LYSOSOMAL CYSTEINE PROTEINASES, CATHEPSINS B, H AND L.

ABSTRACT: Lysosomes of mammalian tissues contain a number of cysteine proteinases such as Cathepsins B, H and L, which participate in intracellular protein degradation and are involved in various pathological disorders. These proteinases have been purified to ~ 1600 fold with ~25% yields from goat liver. These Cathepsins having similar molecular weight (~25,000 Da) were obtained as a single pool after initial purification steps i.e. homogenization of acetone powder, acid autolysis at pH 4.0, 30-70 % (NH4)2SO4 fractionation and molecular sieve chromatography on Sephadex G-100, were simultaneously separated and purified on exchange chromatographies. Cathepsin L was completely separated and purified from Cathepsin B & H at CM- Sephadex C-50 column at pH 5.6 and was eluted as bound protein at 0.62 M NaCl with a purification fold ~1629 and 22 % yield. Cathepsin B was eluted as bound protein in ~1545 fold with ~45% yield at 0.40 M concentration. Complete separation of Cathepsin H from Cathepsin B was achieved on DEAE-Sephadex A-50 at pH 6.0 where the former was obtained as unbound protein and the latter; Cathepsin H thus obtained was purified to ~ 1601.11 fold with ~29.18% yield. Cathepsin B, H & L were thus purified using ion-exchange chromatography.

They are widely distributed in almost all mammalian cells, being mainly responsible for intracellular protein degradation 9 and protein turnover 10-13. When secreted lysosomal cysteine proteinases result in pathological conditions, they are observed to be involved in a number of diseases such as muscular dystrophy 14, malignant melanoma 15-16, cancer 17-19, rheumatoid arthritis 20, osteoarthritis21-22, inflammatory and bone and joint disorders 23,  Alzheimer’s disease 24-25, multiple sclerosis 26 and pancreatitis 27.

In many of these diseases lysosomal enzymes were found to be present in extracellular / extralysosomal environment in the proforms, which are substantially more stable than the mature enzymes 28. The physiological, pathological role of these important protein processors necessitates their identification, isolation, purification and characterization at the required site.   The present work focuses on Cathepsins B, H & L having similar molecular weight 29-31, how ion exchangers can be efficiently employed for simultaneous purification of Cathepsins B, H & L from a single source i.e. goat liver.

The acid soluble proteins were quantitated in the supernatant using Bradford method 32.

Separation and purification of Cathepsins B, H and L: All the purification steps were carried out at 4°C unless otherwise stated. The initial steps of purification i.e., Goat liver acetone powder homogenization in cold 0.1 M sodium acetate buffer pH 5.5 containing 0.2 M NaCl and 1mM EDTA, Acid-autolysis at pH 4·0 and 30-80% ammonium sulphate fractionation. Fractionation of proteases based on molecular weight on Sephadex G-100 column chromatography according to the method described by Kamboj et.al29-31. 2-Mercaptoethanol (2mM) was included in all these steps, except during acetone powder preparation. 50 ml of enzyme solution was applied to a column of Sephadex G-100 equilibrated  with 0.1M sodium acetate buffer  pH 4.76 containing 0.2mM NaCl, 1mM disodium EDTA.

The column was eluted with the same buffer-EDTA solution at a flow rate of 40 mlh, and the fractions of 10 ml were collected and stored at 4oC till the absorbance of effluent buffer at 280nm was nil against the column buffer. The enzyme activities were measured using BANA. Thereafter BANA active fractions were analysed for Z-Arg-Arg-NNapOMe, Leu-2-NNap and Z-Phe-Arg-NNapOMe hydrolysing activities to check the presence of Cathepsin B, H and L (Fig. 1). 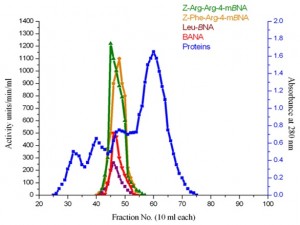 The fractions active against BANA, Leu-2-NNap Z-Arg-Arg-NNapOMe and Z-Phe-Arg-NNapOMe obtained from Sephadex G-100 column were pooled, concentrated and dialysed against 20mM sodium acetate buffer pH 5.6 containing 1mM disodium EDTA and 2mM 2-mercaptoethanol for 24 h. Cathepsin B, H and L having molecular weights in the same range29-31 (~25,000) were eluted as one peak from Sephadex G-100 column and further purified using ion-exchange chromatography. 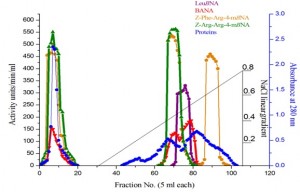 Anion Exchange Chromatography on DEAE-Sephadex A-50:

The above obtained combined pool of Cathepsin B and Cathepsin H were dialyzed against 20mM sodium phosphate buffer pH 6.0 containing 1mM disodium EDTA and 2mM 2-mercaptoethanol for 24h and were applied on DEAE-Sephadex A-50 column equilibrated with 20mM sodium phoshphate buffer (pH 6.0) containing 1mM disodium EDTA. After removing unbound proteins active against Leu-2-NNap, the fractions of bound proteins were eluted with NaCl linear (0.0-0.5M) gradient and were analysed for their activities against Z-Arg-Arg-NNapOMe (Fig. 3).

Z-Arg-Arg-NNapOMe hydrolyzing activity obtained after CM-Sephadex C-50 and DEAE-Sephadex A-50 were pooled together. The separated pools of Cathepsins B, H and L were pooled, concentrated to 15 ml and dialyzed against 50 mM sodium acetate buffer pH 4.6 containing 1 mM disodium EDTA, 0.2M NaCl were concentrated and stored at 4oC for further use. The preparations of Cathepsins B and H contained 0.1mM HgCl2 whereas in cathepsin H 2mM 2- mercaptoethanol was added. 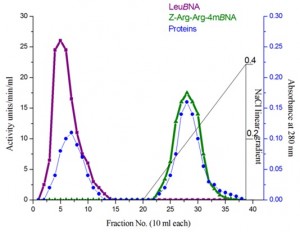 RESULT AND DISCUSSION: Fig. 1 shows the elution profile of different enzymes on Molecular sieve chromatography on Sephadex G-100 column after ammonium sulphate fractionation. It helped in separation and isolation of Cathepsins B, H and L on the basis of their molecular weight (~ 25000) from cathepsin D and DPPI. The results correlate with earlier work 29-31, 34. Some workers 36-41 didn’t include this step at an early stage of purification and hence could not accomplish simultaneous isolation of these proteases. Further fractionation of Sephadex G-100 pool on cation exchange chromatography at pH 5.6 resulted in complete separation of cathepsin L from B and L (Fig. 2). Cathepsin B was eluted as bound protein at 0.62M NaCl exclusively as Z-Phe-Arg-NNapOMe hydrolyzing activity. The separation of cathepsin L from cathepsin B and H on CM-Sephadex cation exchanger has earlier been reported 42-43. Cathepsin B was present in unbound (~ 40%) as well as in bound fractions (~ 60%) as reported45-46 at pH 5.0. the bound Cathepsin H was eluted at 0.48M NaCl alongwith Cathepsin B.

Table 1 depicts the purification factor achieved and % yield obtained after each step of purification. The % yield obtained in all the three enzymes ranges between ~25% whereas ~1600 fold purification was achieved in all the three proteinases. The results are quite encouraging in comparison to earlier reports37-38 in case of Cathepsin H. these workers have not reported simultaneous separation and purification of Cathepsins B, H and L. For the first time, cation and anion exchangers have been successfully used for simultaneous purification of three cysteine proteinases. We are working in the identification of small molecular weight compounds as inhibitors to endogenous proteolytic activities 46-51.

TABLE 1: PURIFICATION OF CATHEPSINS B, H AND L

The results presented here are of a single enzyme preparation that resulted in simultaneous separation and purification of Cathepsin B, H and L using different steps as detailed above. Cathepsin B, H and L activities were assayed using BANA, Leu-2-NNap, Z-Phe-Arg-NNapOMe at pH 6.0, 7.0 and 6.0, respectively. Cathepsin B, H and L has emerged out as targets for development of anticancer drugs. Therefore it becomes relevant to evaluate inhibitory potency of compounds of different classes known to possess anticancer activities on these purified enzymes. The enzymes separated using these steps have been used for studies of different compounds.52-57

CONCLUSION: From the literature study, it is clear that cathepsin B, H and L are important targets in cancer and other pathological disorders such as arthritic conditions and tissue generative disorders and the development of selective inhibitors to these enzymes are a rational approach in the search for chemotherapeutic agents. In this paper, we have reported simultaneous separation and purification of Cathepsins B, H and L using cation and anion exchangers.