ABSTRACTA simple, specific, accurate and precise reverse phase high performance liquid chromatographic method was developed and validated for the estimation of Itraconazole in capsule dosage form. An inertsil C-18, 5μm column having 250 x 4.6mm internal diameter in isocratic mode with mobile phase containing Tetrabutyl ammonium hydrogen sulphate buffer solution and Acetonitrile in the ratio of 40:60v/v was used. The flow rate was 1.5ml/min and effluents were monitored at 225nm. The retention time for Itraconazole was 5.617min. The method was validated for linearity, accuracy, precision, specificity, limit of detection, limit of quantification and robustness. Limit of detection and limit of quantification were found to be 0.85μg/ml and 2.60μg/ml respectively and recovery of Itraconazole from capsule formulation was found to be 98.3 to 100.3%.The system suitability parameters such as theoretical plates and tailing factor were found to be 2927.43 and 1.08 The proposed method was successfully applied for the quantitative determination of Itraconazole in capsule formulation

INTRODUCTION: Itraconazole 1-4 is a synthetic triazole antifungal agent. Itraconazole is a 1:1:1:1 racemic mixture of four diastereomers (two enantiomeric pairs), each possessing three chiral centers. It may be represented by the following nomenclature: 4-[4-[4-[4-[[2-(2, 4-dichlorophenyl)- 2- (1H- 1, 2, 4- triazol- 1-ylmethyl)- 1, 3- dioxolan- 4- yl] methoxy]phenyl] piperazin-1-yl]phenyl]-2-(1-methylpropyl)-2, 4-dihydro-1, 2, 4-triazol- 3-one. It has a molecular formula is C35H38Cl2N8O4 and a molecular weight is 705.64. It is a white to slightly yellowish powder. It is insoluble in water, very slightly soluble in alcohols, and freely soluble in dichloromethane.

Mobile Phase: Prepared a degassed mixture of buffer solution and acetonitrile in ratio of 40:60.

Diluents: Prepared a mixture of methanol and tetra hydro furan in the ratio of 1:1.

Preparation of Standard Solution: Transferred an accurately weighed quantity of about 50 mg of Itraconazole working standard to a 50 ml volumetric flask. Added about 30ml of diluents and sonicated to dissolve. Added 5ml of water to made volume up to the mark with diluents and mixed. Diluted 5ml of this solution to 50 ml with mobile phase and mixed.

Method development: Working standard of various concentrations was prepared by taking aliquots of standard solution and diluted to get required concentration for calibration plot and which was injected.

Assay preparation for Commercial Formulation: Accurately weighed 20 capsules and mixed the content. Transferred 100 mg of Itraconazole into a 100ml volumetric flask, added about 70ml of diluents and sonicated with intermittent shaken for about 25min, then added 10ml of water and sonicated with intermittent shaken for about 10min’s cooled and made volume up to the mark with diluents and mixed. Filtered the solution through 0.45µ Millipore PVDF filtered, the filtrate collected by discarding first few ml of the filtrate. Diluted 5ml of this solution to 50ml with mobile phase and mixed. Results were summarized in table 1. Typical chromatogram of Itraconazole is shown in figure 1.

Procedure: 20 µl of the standard preparation and assay preparation were separately injected and chromatographed. 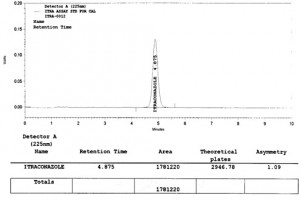 RESULT AND DISCUSSION: The purpose of the present study was to develop a rapid and sensitive RP‐HPLC method for the Itraconazole in capsule dosage form using inertsil C18 analytical column with UV detection.

Validation: The described method has been validated for the Itraconazole using following parameters.

Accuracy: Accuracy of the method was demonstrated at three different concentration levels (80‐120%) by spiking a known quantity of standard drugs into an analyzed sample in triplicate. The results of accuracy table 2 revealed that the method was more accurate.

Precision: To demonstrate agreement among result, a series of measurements are done with Itraconazole at six replicate injections of the specific standard at various time intervals on the same day were injected into the chromatograph and the value of % RSD was found to be 0.27.

Linearity: Linearity was demonstrated by analyzing six different concentrations of active compound. Peak areas were recorded for all the peaks and calibration plot was constructed by plotting peak area vs. concentrations of Itraconazole which were found to be linear in the range of 50μg/ml-200 μg/ml. Coefficient of correlation of Itraconazole were determined and mentioned in table 3.

Robustness: As per ICH norms, small, but deliberate variations, by altering the pH or concentration of the mobile phase were made to check the method’s capacity to remain unaffected. The change was made in the ratio of mobile phase, flow rate and column temperature. Results of analysis were summarized in table 4.

CONCLUSION: The proposed method was found to be simple, fast, robust, more precise and accurate under the present experimental conditions. Therefore the developed method can be used for routine analysis of Itraconazole in bulk and pharmaceutical dosage form.