ISOLATION AND ANTIMICROBIAL AND DEGRADATIVE POTENTIAL OF ACTINOMYCETES

ISOLATION AND ANTIMICROBIAL AND DEGRADATIVE POTENTIAL OF ACTINOMYCETES

Approach: In this study we have isolated total 5 Actinomycetes from the Ganga river bed. All the isolates later purified and identified by various Morphological and Biochemical test. Here Nocardia was subjected to antimicrobial test against Streptococcus, Mucor and Aspergillus and it was also subjected to degradation test against Petrol.

Result: The 5 isolates are Streptomyces, Micromonospora, Micromono sporangium and 2 different strain of Nocardia (Na1 and Na2). The 2 strains of Nocardia are active against Streptococcus (Na1 29.6mm, Na2 26.6mm), Mucor (Na1 12.5mm, Na2 22.5mm) and Aspergillus (Na1 50%, Na2 60%). They also degrade Petrol very effectively, decrease in total organic carbon of the medium was observed during the degradation of petrol.

Conclusion: Our observation provides us with evidence that these agents can be used for the production of new antibiotics and as the agent to control the environment pollution.

INTRODUCTION: The Actinomycetes are Gram positive bacteria having high G + C content in their DNA. The name Actinomycetes was derived from Greek word ‘aktis’ (a ray) and ‘mykes’ (fungus) and given to these organisms from initial observation of their considered to be an intermediate group between bacteria and fungi but now considered as prokaryotic organisms, the majority of Actinomycetes are free living, saprophytic bacteria found widely distributed in soil, water and colonizing plants.

Actinomycetes population has been identified as one of the major group of the soil population 1, which may vary with the soil type. Actinomycetes are the most widely distributed group of microorganism in nature which primarily inhabit the soil 2, they have provided many important bioactive compound of high commercial value and continue to be routinely screened for new bioactive compounds. Almost 80% of the world antibiotics are known to come from Actinomycetes, mostly from genera Sterptomyces and Micromonospora 3.

Microbial antagonists are widely used for the biocontrol of fungal disease, Actinomycetes are the main source of antifungal hence highly used pharmacologically and commercially, these are the secondary metabolites of the Actinomycetes. The antagonistic activity of Actinomycetes to fungal pathogens is usually related to the production of antifungal compounds against Fusarium oxysporum, Sclerotinia rolfsii 4 (Lim et al 2000 ). Soil Actinomycetes particularly Streptomyces sp. enhance soil fertility and have antagonistic activity against wide range of soil born plant pathogens 5 (Aghighi et al 2004).

Action of Microorganism on Hydrocarbon: Many microorganism have the ability to utilize the hydrocarbon as the sole source of energy are widely distributed an enormous number and variety of organic compounds and were extremely important in the mineralization of organic matter. All the marine and fresh water ecosystems contain some oil degradation bacteria, no one species of microorganism, however is capable of degrading all the compounds of the given oil. The ability of a microorganism at a spill site is governed by the metabolic reactions. This ability is in turn governed by their genetic composition.

Enzymes produced by microorganism in the presence of carbon sources are responsible for attacking the hydrocarbon molecules, other enzymes are utilized to breakdown hydrocarbon further, lack of an appropriate enzyme either prevents attack or is a barrier to complete hydrocarbon degradation. At least two categories of enzymes are actively involved in biological degradation of polymers: extracellular and intracellular depolymerases during degradation.

Exoenzymes from microorganism breaks down the complex polymers yielding smaller molecules of short chains eg- oligomers, dimmers and monomers, that are smaller enough to pass the semipermeable outer bacterial membranes, and then to be utilized as carbon and energy sources. The process is called depolymerization, when the end products are CO2, H2O or CH4 the degradation is called mineralization. When O2 is available, aerobic microorganisms are mostly responsible for destruction of complex materials, with microbial biomass, CO2 and H2O as the final product. In the study, petrol were subjected to the biodegradation by ASTMD 5338 Standard.

Isolation and Identification of Actinomycetes: For Actinomycetes, soil sample were collected from the Ganga river bed. The sample collected are air dried aseptically, then one gram of above sample was suspended in 10 ml of sterile distilled water blanks, serial dilution was prepared by transferring 1ml of suspension to 9ml sterial distilled water blanks, 1ml suspension of 10-3, 10-4, 10-5 dilution was pour plate on Glycerol Yeast Extract Agar medium and incubated at 28oC for 6 to 7 days. Actinomycetes was identified on the bases of various morphological and biochemical test such as Catalase, Starch Hydrolysis, Indole test, Methyl red test, Voges Proskauer test, Citrate utilization 6 (Aneja 2003).

Here A= Zone of clearance; B = Cork borer diameter

A mycelium disc 10mm diameter, cut out from periphery of 3 to7 days old culture was aseptically inoculated on agar plates containing the Actinomycetes extract. The inoculated plates were incubated at 25oC and colony diameter was measured and recorded after 7 days.

Percent mycelia growth inhibition was calculated as given below:

Mean dia. of growth in control

Biodegradation of Petrol: ASTM (American Society for testing and material) Process is used

Later they are identified on the bases of morphological and biochemical tests.

Antimicrobial Activity of Nocardia (Na 1 and Na 2): The both culture were screened for antimicrobial properties against Streptococcus, Staphylococcus, Mucor and Aspergillus. Sensitivity and resistance was calculated by well diffusion and food poison method. 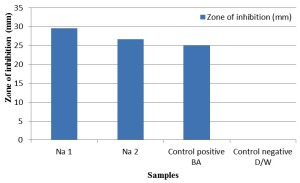 FIG. 1: ANTIBACTERIAL ACTIVITY CO-TRIMOXAZOLE WAS FOUND TO HAVE MAXIMUM ACTIVITY AGAINST STREPTOCOCCUS BY MULTIDISC DIFFUSION, USED AS POSITIVE CONTROL. Staphylococcus show complete resistance against both the strains. 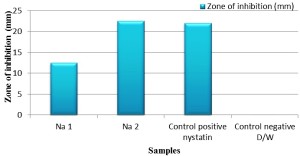 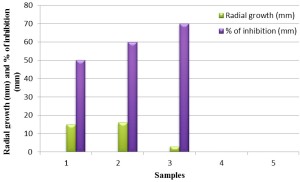 Actinomycetes colonies were observed as creamish, white, pinkish, gray, powdey, gummy as show in slants. A few biochemical tests are performed to identify these. Actinomycetes identified are 2 strains of Nocardia (Na 1 and Na 2) Micromonospora, Streptomyces and Streptosporangium (Table 2 and 3). Out of these we select Nocardia for our work.

Antibacterial potential was measured by the utilization of agar diffusion technique i.e. disc or well diffusion method, both the strains of Nocardia i.e. sample 1 and sample 2 shows the antibacterial potential against Gram positive (Stereptococcus) and show the zone of inhibition of 29.6 mm and 23.3 mm (Table 4, Fig. 1)  respectively.

On the other hand Biodegradation is a natural process where bacteria or other organisms alter and break-down of organic molecules into other substances such as fatty acids and carbon dioxide, which is not harmful to the environment. Many microorganisms having the ability to utilize hydrocarbons as sole source of energy are widely distributed in nature, no one species of microorganism, however is capable of degrading all the components of a given hydrocarbon. The hydrocarbons were found to be degraded more efficiently by a mixture of strains.

Two strains of actinomycetes were isolated from soil, measuring the CO2 produced when petroleum is exposed to micro-organisms under control aerobic aquatic conditions helps to know the biodegradability of that product.

The sample of Nocardia that achieve a high degree of  CO2 evolution may be assumed  to be easily biodegradable because CO2  is evolved when micro-organisms are able to degrade hydrocarbon as their carbon source to gain energy, test substances that achieve a high degree of  biodegradability in this test may be assumed as eco – friendly  i.e. can be used in the environment without any harm. Various organisms have to be tested for their activity of biodegradation of petroleum such as thermophilic organism’s 10.

CONCLUSION: We conclude that the selected Actinomycetes show’s both antimicrobial and degradation potential. We infer that both strain can be used for the treatment of various bacterial and fungal infection. Further, they can also be used to control the environment pollution. Our finding we believe, substantiate and also provide ample scope for studies in this direction.

ACKNOWLEDGEMENT: We sincerely thank prof. (Mrs.) Padma singh Head of Department of Microbiology, Gurukul kangri university Hardwar, for her support and encouragement. We owe our sincere gratitude and thanks to IIT roorkee and Gurukul library for finding the literature on our work, we also wish to acknowledge the support of Gurukul lab faculty, which provide us the basic laboratory facilities.