ISOLATION AND CHARACTERISATION OF L-GLUTAMINASE PRODUCING FUNGI FROM MARINE SOURCE

ISOLATION AND CHARACTERISATION OF L-GLUTAMINASE PRODUCING FUNGI FROM MARINE SOURCE

INTRODUCTION: Enzymes are specialized proteins that cooperate with vitamins and minerals and act as a catalyst to accelerate the chemical reaction in biological cells. Enzymes are highly specific in their action towards the substrate, and often, many different enzymes are required to bring about by concerted actions 1.

Enzymes are in great demand for use in pharma-ceuticals. The manufacturing or processing of enzymes for use as a drug is an important fact of today's pharmaceutical industry. Attempts to capitalize on the advantage of enzymes as drugs are now being made at virtually every pharmaceutical research center in the world.

Enzyme supplements are available in pills, capsules, and powders that often combine several enzymes. Microbial enzymes are preferred over plant or animal sources due to their economic production, consistency, process modification, and optimization.

They are relatively more stable than the corresponding enzymes derived from plants or animals 2, 3, 46. Cancer, particularly Acute Lymphoblastic Leukaemia (ALL), is a global problem. Despite sincere efforts paid in the past, the search for efficient drugs to solve this problem is being continued worldwide. Unlike normal cells, leukemic cells do not depend on L-glutamine synthetase; they directly depend on the exogenous supply of L-glutamine from the blood for their growth and survival 4, 44, 45. Therefore, blood L-glutamine serves as a metabolic precursor for the nucleotide and protein synthesis of tumor cells. Consequently, L-glutaminase causes selective death to L-glutamine-dependent tumor cells by blocking the energy route for their proliferation 5, 6, 7. The ability of the enzyme to bring about degradation of glutamine poses it as a possible candidate for enzyme therapy, which may soon replace or combined with L-asparaginase in the treatment of acute lymphocytic leukemia; it is found that administration of L-glutaminase will deplete L-glutamine, which is required for asparagine synthesis in the body of patient thereby inhibiting asparagine dependent protein synthesis and eventually the synthesis of DNA and RNA 8, 9, 10. Although several kinds of treatments are available, enzyme therapy is equally effective. L-asparaginase and L-glutaminase (L-glutamine amidohydrolase EC 3.5.1.2.) earned attention since the discovery of their antitumor properties of economic importance from potential marine microorganisms, especially fungi 11. L-glutaminase (EC 3.5.1.2) is an amidohydrolase that catalyzes the hydrolytic deamination of L-glutamine, resulting in the production of L-Glutamic acid and ammonia 12 Fig. 1. L-glutaminase is ubiquitous in the biological world, and organisms ranging from bacteria to human beings have the enzyme. A variety of microorganisms, including bacteria, yeast, molds, and filamentous fungi, have been reported to produce L-glutaminase, of which the most potent producers are fungi 13, 14, 15. L-glutaminase is the cellular enzyme that deaminates the L-glutamine. The action of glutaminase plays a major role in the cellular nitrogen metabolism of both prokaryotes and eukaryotes. L-glutaminase received much attention with respect to the therapeutic and industrial applications 16.

FIG. 1: HYDROLYSIS OF L-GLUTAMINE TO L-GLUTAMATE BY L-GLUTAMINASE

The Marine biosphere is one of the richest habitats, which is less explored. Because of the diversity and scale offer enormous opportunities for non-destructive exploitation within many facets of modern biotechnology 17. Knowledge of marine microbes is limited, and they remain untapped sources of many metabolites with novel properties 18. Marine microbes and their enzymes are industrially important due to their increased tolerance to salinity and are being intensively screened for products of economic importance 19. Further, as of date, marine microorganisms remain as untapped sources of many metabolites with novel properties. Marine microorganisms have a diverse range of enzymatic activity and are capable of catalyzing various biochemical reactions with novel enzymes. Thus, there is enormous scope for the investigations exploring the probabilities of deriving new products.

Moreover, the marine environment, particularly seawater, which is saline in nature and chemically closer to human blood plasma, could provide safer microbial enzymes with no or less side effects when administered for human therapeutic application. The major restriction in the application of terrestrial L-asparaginase in the treatment of ALL is the development of allergic reactions in the patients and ultimately leading to inactivation of the drug 20. This could be effectively suppressed by the application of L-glutaminase from marine source 21. With this idea, the present work is intended to isolate and characterize a potent marine fungal strain capable of producing the L-glutaminase enzyme. Further, the physical and nutritional parameters were optimized to enhance the L-glutaminase production by one factor at a time method (OFAT) 22, 23, 24.

Source of Strain: Soil samples were collected from different seashores of Parangipettai (Lat. 11o 42’ N; Long. 79o 46’ E) in sterile polythene bags and transported to the laboratory. The samples were stored at 4oC till further use.

Enrichment and Selective Isolation of L-Glutaminase Isolates: One gram of soil sample was suspended in 100 ml of seawater and placed in an incubator (28°C) for 30 min for the complete mixing of the soil sediment. About 1.0 ml of the supernatant solution was serially diluted in sterile seawater and 0.1 ml of this was spread on Minimal Glutamine Agar (MGA) medium (0.5 KCl; 0.5 MgSO4; KH2PO4; 0.1 FeSO4; 0.1 ZnSO4; 10 glutamine, 0.12 phenol red (g/l). L-glutamine act as the sole carbon and nitrogen source, red phenol act as a pH indicator.

The plates were incubated at 28oC for 5 days 25, 26. All the media in the present work was prepared with seawater which has 30 ppt (parts per thousand) of salinity. Isolated fungal strains were maintained in potato dextrose agar (PDA) medium 27 and the cultural characterization was performed.

Determination of L-Glutaminase Activity: L-glutaminase activity was measured by the Imada et al. method (1973) 28, 44. The different isolates were grown for 5 days at 28°C and harvested by centrifugation at 10,000 rpm for 20 minutes, and the supernatant was used for L-glutaminase assay. An aliquot of 0.5 ml of the sample was mixed with 0.5 ml of 0.04 M L-glutamine solution in the presence of 0.5 ml of distilled water and 0.5 ml of phosphate buffer (0.1 M, pH 8). The mixture was incubated at 37°C for 30 min and the reaction was arrested by the addition of 0.5 ml of 1.5 M trichloro acetic acid. To 0.1 ml of the mixture, 3.7 ml of distilled water and 0.2 ml of Nessler’s reagent were added. The absorbance was measured at 450nm using a UV-Visible spectrophotometer. One international unit of L-glutaminase was defined as the amount of enzyme that liberates one µ mole of ammonia under optimal conditions. The enzyme yield was expressed as Units/ml (U/ml of culture supernatant) 17.

Production Medium: Five different types of production media were evaluated for the production of L-glutaminase enzyme by submerged fermentation (SmF).

Optimization of Process Parameters for L-glutaminase Production by Marine Fungi: Various physiochemical parameters and media components were tested as a single variable by OFAT approach 22, 45. The effect of individual parameters such as pH, temperature and inoculum size were investigated on the production of L-glutaminase. Following this, the effect of different carbon sources, nitrogen sources and amino acids were also analyzed. The independent parameters were evaluated keeping other parameters at constant level and selected parameters were incorporated in the next experiment while optimizing the next parameter. All the fermentation experiments were carried out in triplicates in 250 ml Erlenmeyer flasks.

Effect of Temperature: The optimum temperature required for maximal L-glutaminase production by the fungal strain under submerged fermentation was estimated by incubating the inoculated Minimal medium at various temperatures (28 - 50oC) in a shaker for 5 days. After incubation, the fermented broths were centrifuged, supernatant was collected, and the yield of L-glutaminase was estimated.

Effect of Inoculum size: The Minimal media was inoculated at various inoculum concentrations of 1-6% and incubated at 28oC for 5 days. The yield of L-glutaminase was determined.

Effect of pH: The strain was inoculated in 100ml of SWG media, which was prepared in various pH of 5 to 9 and incubated in at 28oC for 5 days. The yield of L-glutaminase was measured by Imada et al. 1973 method 28.

Effect of Additional Carbon Sources: Adding other carbon sources along with glutamine was analyzed by incorporating (Mannitol, sucrose, sorbitol, glucose, maltose, and Mannose) in the medium individually at 1% (w/v) level. The yield of L-glutaminase was determined.

Effect of Additional Nitrogen Sources: The effect of adding other nitrogen sources along with glutamine was analyzed by incorporating (Peptone, Yeast extract, Ammonium sulphate, Malt extract, Ammonium nitrate, and Potassium nitrate) in the medium individually at 1% (w/v) level. The yield of L-glutaminase was determined.

Effect of Amino Acids: The effect of adding other amino acids on the production of L-glutaminase enzyme was analyzed by incorporating (L-glutamic acid, L-asparagine, Arginine, Methionine, and Proline) in the medium individually at 1% (w/v) level. The yield of L-glutaminase was determined.

The L-glutaminase assay was determined by Imada et al., 1973 method 28. Out of the two strains, the strain showed the highest enzyme production of 628.24 U/ml Fig. 2. Strain 1 was selected for further characterization. 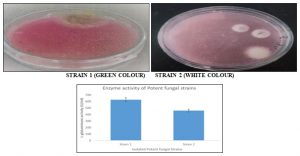 Characterization of the Potent Strain 1: The potent strain1 was allowed to grow in PDA medium for candida formation and identified as reported by Diba et al., 2007 37, 38. Further, the strain was morphologically characterized by lactophenol cotton blue staining Fig. 3, and the morphological analysis of the isolate is summarized in Table 1. 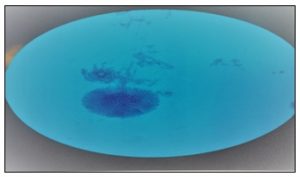 Based on the morphological characteristics the strain1 belongs to Aspergillus species. The morphological characteristics were in good agreement with the Aspergillus flavus strain S4 characteristics described by Hemalatha et al. (2018) 38. The Molecular characterization of strain1 was performed by (ITS)/5.8S rRNA gene sequence analysis, and strain1 was confirmed as Aspergillus flavus. The evolutionary history was inferred using the Neighbor-Joining method 30, 50. The evolutionary distance was computed using the Tamura 3-parameter method 39 and is in the units of the number of base substitutions per site. The rate variation among sites was modeled with a gamma distribution. The analysis involved 12 nucleotides sequences. All positions containing gaps and missing data were eliminated. There was a total of 396 positions in the final dataset. Evolutionary analyses were conducted in MEGA6 40. The gene sequence was submitted to the NCBI Gene Bank database with accession number MF445235. The evolutionary relationship of taxa based on ITS sequence is shown in Fig. 4 and 5. 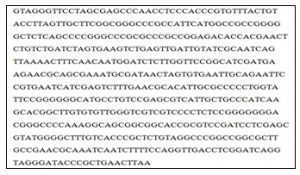 FIG. 5: PHYLOGENETIC EVOLUTIONARY RELATIONSHIP OF TAXA BASED ON ITS SEQUENCE 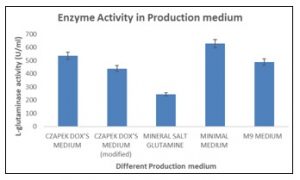 Effect of Inoculum size: The Minimal medium was further optimized to enhance the production of L-glutaminase. Various concentrations of inoculum size (1-6%) were analyzed with an incubation period of 144 h at 25℃ Fig. 7. 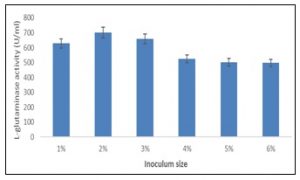 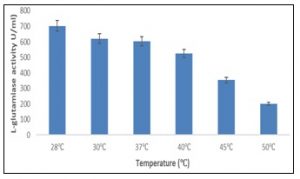 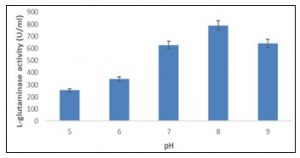 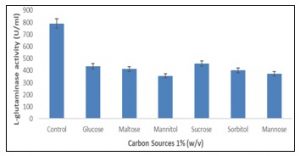 FIG. 10: EFFECT OF ADDITIONAL CARBON SOURCES ON THE PRODUCTION OF L-GLUTAMINASE BY ASPERGILLUS FLAVUS JK-79 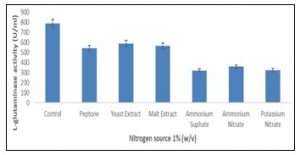 FIG. 11: EFFECT OF ADDITIONAL NITROGEN SOURCES ON THE PRODUCTION OF L-GLUTAMINASE BY ASPERGILLUS FLAVUS JK-79 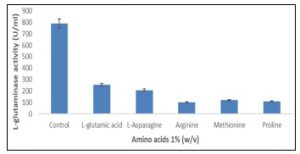 FIG. 12: EFFECT OF AMINO ACIDS ON THE PRODUCTION OF L-GLUTAMINASE BY ASPERGILLUS FLAVUS JK-79

CONCLUSION: L-glutaminase from marine bacteria has been reported to have a very high affinity for substrate and pH optima in the range 7.4, which is an indication of a better therapeutic regime over the other terrestrial bacterial glutaminase whose pH optima ranges from pH 5-7. Therefore, L-glutaminase produced from marine fungi may hold more potential for treating ALL (Acute Lymphoblastic Leukemia) rather than L-asparaginase from a terrestrial isolate. With this objective, the marine fungal isolate capable of producing L-glutaminase was isolated, and the physiochemical parameters were optimized to obtain the maximal yield of the L-glutaminase enzyme. Thus, maximal production of L-Glutaminase by Aspergillus flavus JK-79 was recorded at pH 8 (790.436U/mL), temperature 28°C with 2% inoculum size. Thus, L-glutaminase from Aspergillus flavus JK-79 could possibly be an alternate for treating ALL with minimal side effects.