ABSTRACT: Aim of this study was to identify and characterise the bioactive principles from the latex of Calotropis procera which could influence cellular and humoral aspects of immune system which may influence immune disorders. Calotropis procera R.Br. (Asclepiadaceae), commonly known as milk weed or swallow-wort, is a medicinal plant widely used as a folk medicine in India. It exhibits a wide spectrum of pharmacological activities shown by various research activities till date like anti microbial, anticancer wound healing. After successive extraction of dried latex ethyl acetate extract of latex was subjected to bioassay-guided fractionation. The two fractions obtained (EA I and II) were tested for immunomodulatory activity using delayed type hypersensitivity and humoral antibody titre by antigenic sheep RBCs. The active molecule was isolated, based upon bioassay guided fractionation, and identified as β-sitosterol on spectral evidence. Only the fraction (EA I) containing β- Sitosterol showed promising humoral and cellular activity with Primary HA titre value 201.29 ±  2.35 and secondary HA titre value 296.51 ±  1.45.  β- Sitosterol, a pentacyclic triterpenoid was extracted for the first time from the latex of Calotropis procera and characterized by spectral studies UV, IR, NMR and MASS. The presence of appreciable amounts of β- Sitosterol in the latex may account for its various pharmacological activities. The present study provides some scientific evidence for the traditional use of Calotropis procera in the immunomodulatory activity, which could play some role in humoral and cellular response in immunity.

INTRODUCTION: Calotropis procera, a laticiferous plant of family Asclepiadaceae commonly known as milk weed or swallow-wort, widely used as a folk medicine in India is non-cultivated, xerophytic shrubs of geographic distribution covering all over the world. It is well known for its multifarious medicinal properties as well as toxic potentials. Different parts of this plant is used in the traditional medicinal system 1.

Naturally β-sitosterol (22, 23-Dihydrostigmasterol, Stigmast-5-en-3-ol) is biosynthesised during membrane biogenesis, chemically it is not completely synthesized so far, and is produced from pure stigmasterol by two pathways. Some of the other analogues of β-sitosterol present in the plant are Daucosterol, Stigmasterol, Campesterol, Fucosterol, Gorgosterol and Ergosterol 7. In the present study, we have isolated and characterized β-sitosterol, a pentacyclic triterpene, from the ethyl acetate fraction of C. procera latex extract. β-sitosterol is reported to exhibit a wide range of pharmacological activities against various disease conditions such as analgesic, inflammation, anti-mutagenic, anthelminthic, 8, apoptotic 9, chemoprotective 10, hypocholesterolemic 11, angiogenic 12, genotoxic 13, anti cancer 14, anti-oxidant 14,15, anti-diabetic 15,16, antimicrobial antifungal infections 17 and in therapeutic activity of many diseases like BPH, prostatic cancer 18, inhibitory action on glucoamylase in vitro 19 and Neuroprotection 20 .

The objective of the present study was to derive bioactive compounds by bioassay guided fractionation from ethyl acetate extract of Calotropis procera latex that would influence various measures in immunomodulation and alleviate various cellular and humoral immunomodulatory pathophysiology of diseases. 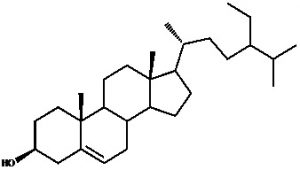 Plant material and latex collection: The fresh latex of Calotropis procera was collected from the campus, in amber colour well tight container. The plant was identified by a taxonomist and deposited at the herbarium of the Biological survey of India, Pune, India where voucher specimen was kept at the centre with number (BSI/WRC/Tech./ 2010/ GAPCAP1).

Extraction: From the previous study it was revealed that ethyl acetate extract showed better activity in the phytochemical and in vivo immunomodulatory activity. Briefly, latex (350 g) was shade dried at 50 °C, coarsely powdered and extraction of dried latex with hexane (3.0 l). The solvent was filtered through Whatman No. 1 filter paper and evaporated to dryness under vacuum at 40 °C using a rotary evaporator. The hexane extract was labelled as CH1 (4.2 g). The defatted marc was subjected to successive soxhlet extraction with chloroform, ethyl acetate and ethanol respectively (2.5 l) under reflux for 5 h. The solvent was removed under reduced pressure using a rotary evaporator at 40ºC to obtain the chloroform (20.4 g), ethyl acetate (5.8 g) and ethanolic (15.4 g) extracts respectively 21.

A total of 30 fractions were collected each in 100 ml conical flask. Fractions that showed identical behaviour in thin layer chromatography (TLC) were combined. The pre-coated TLC plates developed with n-hexane, chloroform and ethyl acetate (98:20:2 v/v) showed a violet spot at a Rf value of 0.52 when sprayed with anisol-sulphuric acid reagent and heated at 110 ºC for 5 minutes 22. White crystals deposited on the walls after further purification of fraction. These crystals produced a single spot on TLC, confirmed to be a single compound, Co-TLC with authentic sample and chemical characterization using UV, IR NMR and Mass spectral studies for structure elucidation.

Salkowski reaction: A few crystals of compound were dissolved in chloroform and a few drops of concentrated sulphuric acid were added to the solution, the compound formed a reddish colour in the upper chloroform layer indicating presence of steroids 23.

Liebermann-Burchard reaction: A few crystals of compound were dissolved in chloroform and few drops of concentrated sulphuric acid were added to it followed by the addition of 2-3 drops of acetic anhydride. In this case compound turned to violet blue and finally formed green colour which indicates the presence of steroids 23.

Animals: Swiss albino mice (20–30 g) of either sex were used. Animals were assigned to groups and maintained at controlled room temperature (25–28°C). All the experimental procedures were carried out according to IAEC.

Delayed type hypersensitivity (DTH): After sensitization with sheep RBC on day +7, in the right hind foot pad, the thickness was measured at 0, 3, 24 and 48 h. The difference was taken as the measure of DTH response 21.

Statistical analysis of data: All the data were expressed as mean ± S.D. Statistical evaluation was carried out using one-way ANOVA followed by Tukey’s test using “Graphpad Instat” version 3.00 for windows, Graphpad software, San Diego, California, USA. The values of p < 0.05 were considered to be statistically significant. All experiments were done in quadruplicates.

Chemical structure and analysis of β-sitosterol:  The compound was obtained as a white crystalline compound with melting point 135-137ºC which gave positive test for steroids. Dried crystals were reconstituted in ethyl acetate and spotted on silica TLC plates.

DISCUSSION: Presence of β-sitosterol was detected on plates as the pink spot at the Rf value of 0.58 (hexane:ethyl acetate:chloroform, 90:10:20, v/v) which is similar to the earlier reported by Karan et al., 2012 16.

The molecular ion was 381 (M−H)- in the negative-ion ESI-MS spectra, confirmed the molecular weight of the EA-I as m/z 414. The molecular formula of C29H50O was established from elemental analysis with the C:H:O ratios of 10:14:1. The isolated compound was identified as β-sitosterol (Fig. 1) by FT-IR, 1H-NMR, 13C NMR spectra, and by comparing the spectral data with the published values by Bulama et al., 2015 24.

Since, the NMR machine indicated steroidal nucleus and the compound gives positive test for steroids so all of the other structures other than steroids were rejected. From the functional group analysis, the oxygen present is in the form of hydroxyl group, which is also supported by IR spectroscopy (Shimadzu, IR). This implies presence of one double bond in the structure 25. So, the steroids with other functional groups were rejected. Also on considering the nature of oxygen as hydroxyl and presence of one double bond, the general formula for the compound is CnH2n-6.

In a study the effect of β- sitosterol and its glycoside on the pig immune system was reported. BSS increased viable peripheral blood mononuclear cell (PBMC) numbers and it activated swine dendritic cells (DCs). Pigs exhibited some changes in immunological parameters, such as the proliferation ability of PBMC after phytohemaglutinin stimulation and increased apolipoprotein A1 plasma concentration which may contribute to enhance PRRSV vaccine response 28.

In another activity the phytosterols, β- sitosterol, and its glucoside enhance the in-vitro proliferative response of T-cells by phytohaemagglutinin, In vitro essential sterolin formulation (ESF- 1 mg/ml) was able to significantly enhance NK-cell activity. 29.

In-vivo effect of β-sitosterol in a model of delayed-type hypersensitivity (DTH) was tested. The obtained results in DTH are showed in Table 2. The extract inhibited the oedema at 24 hours but this effect was not maintained until the end of the assay. AT and DTH response was performed to find out effect on the specific as well as nonspecific immune functions. SRBCs as antigen is used to sensitize them for elicitation of DTH and also induce antibody formation, therefore it enables two components of immune responses to be measured in the same species under ideal condition 30. The humoral immunity involves interaction of B cells with the antigen and their subsequent proliferation and differentiation into antibody secreting plasma cells 31.

In the previous study, the ethyl acetate extract of latex of Calotropis procera showed good immunomodulatory activity 21. Therefore it was further fractionated to obtain the compound responsible for such activity. The β - sitosterol which constituted up to 21% of the total ethyl acetate extract was subjected to further studies for evaluating its immunomodulatory potential.

CONCLUSION: From the above findings, β-sitosterol, a pentacyclic triterpene was isolated and characterized for the first time, from the latex of Calotropis procera and chemical structures elucidated respectively. It was carried out by means of various physical (solvent extraction, TLC, CC) and spectral techniques, column and thin layer chromatographic analysis proved the compound to be a tri-terpenoid. Results of the UV-Vis, FTIR 1H, C13 NMR and MASS spectral data indicated the triterpenoid to be β-sitosterol (m.p. 135–137°C, uncorrected).