Categories Menu
Home » ISOLATION AND CHARACTERIZATION OF A TRITERPENOID FROM THE LEAVES OF AZIMA TETRACANTHA LAM.

ISOLATION AND CHARACTERIZATION OF A TRITERPENOID FROM THE LEAVES OF AZIMA TETRACANTHA LAM.

ISOLATION AND CHARACTERIZATION OF A TRITERPENOID FROM THE LEAVES OF AZIMA TETRACANTHA LAM.

ABSTRACT: Azima tetracantha Lam. (Salvadoraceae) is a traditional medicinal plant primarily used for mother care treatments after delivery. Based on literature survey, it was noticed that the evaluation of the biopotential of A. tetracantha, and its phytoconstituents are scarcely reported from plant materials growing in the state of Kerala, India.  An attempt was made to reveal the phytochemical profile of the plant using various chromatographic as well as spectroscopic techniques. A triterpenoid of friedelane derivative, was isolated from the leaves of A. tetracantha by employing chromatographic techniques like Column chromatography and thin layer chromatography (TLC), along with preparative TLC. The isolated compound was observed to be white coloured powder consisting of needle shaped crystals. The melting point of the isolated compound was found to be 261- 263 ºC (uncorrected). The crystals were soluble in hexane, acetone, ethyl acetate and methanol.  It was insoluble in water. Further spectroscopic characterization using ultra- violet spectroscopy (UV-Vis), infra red spectroscopy (FTIR), liquid chromatography mass spectrometry (LCMS) and 1H- NMR. of the compound revealed it to be friedelin.  Ab initio calculations of isolated compound at HF/3-21G* level of theory has generated an IR spectrum which showed strong signals for carbonyl oxygen (C=O) and C-H stretching of methyl groups similar to the experimental IR spectrum reported in the study. This computed IR spectrum matched perfectly with experimental IR spectrum, confirming the isolated compound to be friedelin

INTRODUCTION: Phytochemical research tries to fulfill the needs for finding new and effective pharmaceuticals. Nowadays, the focus has turned to plant substances that are capable of being used in development of new therapeutic drugs. Study of plant species and the structural elucidation of its bioactive molecule(s) are the most important aims of phytochemical research.

Initial phytochemical screening and further isolation, purification and identification of the molecular structure of active compound(s) have made a major breakthrough with rapid advances in chromatographic and spectroscopic techniques 1.

Azima tetracantha is a member of the family Salvadoraceae (Mustard tree family). It is used in traditional medicine practices in the remote villages of South Kerala. The plant is reported to have antispasmodic, diuretic, analgesic, wound- healing, anti-inflammatory, anti-diabetic, anti- arthritic, anti-rheumatic, anti- catarrahal, antiperiodic and astringent properties. It is used to get relief from muscular rheumatism and in diarrhoea and is also given in dropsy, to relieve cough of phthisis and asthma; for ulcers and in small pox 2. Secondary metabolites isolated from plants have been used as sources of derivatives with a large spectrum of biological activities 3. The premier steps to utilize the biologically active compound from plant resources are extraction, pharmacological screening, isolation and characterization of bioactive compounds, followed by their toxicological and clinical evaluation 4. Screening of literature revealed that, plant samples of A. tetracantha, have been previously investigated for their chemical constituents. However, among the various phytochemicals identified to be present in Azima tetracantha, terpenoids expecially triterpenoids were detected in large amounts 5.

In the present study an attempt was made to isolate the prominent tripterpenoid(s) from the leaves of A. tetracantha using different chromatographic and spectroscopic techniques.

Leaves of Azima tetracantha were collected from Nemom, Trivandrum (Fig. 1). It was identified and authenticated by the Curator, Department of Botany, University of Kerala, Kariavattom, Thiruvananthapuram. A voucher specimen has been submitted in the Herbarium, Department of Botany (KUBH 5813). 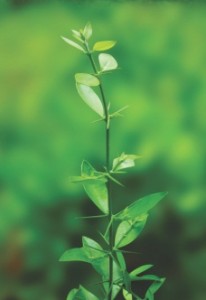 The leaves were cleaned and freed from foreign materials. They were then minced, air dried and powdered 6. The powdered samples were extracted with methanol (ME) using the Soxhlet apparatus.

For the isolation of the terpenoids, the method adopted by Antonisamy et al, (2011) 7 was modified and followed. The concentrated methanol extract was fractionated three times with hexane and was subsequently evaporated in vacuo using a rotary evaporator. The concentrated residue (ATHf) was stored at 4°C in sterile air tight bottles, for further studies.

Each fraction was screened for the presence of phytocompound(s) using thin layer chromatography (TLC). Similar fractions were pooled together according to TLC profile. Sub fraction ATBC3, developed using the solvent system hexane: ethyl acetate (9.5:0.5), yielded a white coloured powder on recrystallisation. This powder on thin layer chromatography showed a prominent single band and the Retention factor (Rf) value was noted.

The single spot corresponding to the Rf value (obtained from the analytical TLC) was separated, centrifuged and purified.  The steps were repeated four times.  The pure compound was obtained as needle like crystals and the yield was 20.24mg.

Physical properties: ­­­­­­­The solubility and melting point of the pure compound(s) was determined according to the method of Wheet (2011) 8.

In the present study a triterpenoid of friedelane derivative was isolated from the leaves of A. tetracantha. Physical and chemical characterization of the compound revealed the compound to be friedelin. Isolation of friedelin from leaves of A. Tetracantha from Kerala is reported for the first time.

Initial separation of the hexane fraction of methanol leaf extract, when subjected to column chromatography, yielded a total of 73 fractions (F1- F73), using gradient elution of hexane: ethyl acetate (9.5-0.5 to 0.5-9.5).  The collected fractions were screened for the presence of phytocompound(s) using thin layer chromatography (TLC). Similar fractions were pooled together according to TLC profile to yield a total of 14 sub- fractions (ATA- ATN).

Fractions ATB and ATC collected with hexane: ethyl acetate (95: 5) showed the presence of a single band in TLC and were pooled (ATBC). This pooled fraction on further column separation gave a total of seven sub- fractions (ATBC1to ATBC7) after eluting with hexane: ethyl acetate (9.5: 0.5). Sub fraction ATBC3 yielded white coloured needle like crystals. This compound on thin layer chromatography showed a prominent single blue band with Rf value of 0.47 and fluorescence quenching under long UV (364nm) (Fig. 2a). This single fluorescent band turned purple on spraying with H2SO4 and subsequent heating at 110ºC, indicating the presence of terpenoid compound. It also answered Liebermann- Burchard reaction and antimony trichloride spray (the band gave pink colour) for triterpenoids. Sub- fraction ATBC3 was white coloured needle like crystals weighing, 20.24mg on recrystallization. The phase contrast image of the needle is shown in Fig. 2b. 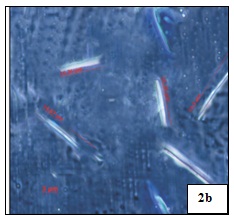 FIG. 2b: PHASE CONTRAST IMAGE OF THE ISOLATED COMPOUND ATBC3

Physical Properties: The isolated fraction, ATBC3 was observed to be a white coloured powder consisting of needle shaped crystals.  Solubility tests are performed on unknown samples to gather valuable information about possible functional groups through the use of the solubility classifications. Solubility denotes the nature of the compound 10. The crystals, ATBC3, were soluble in hexane, acetone, ethyl acetate and methanol and were insoluble in water.  Melting point information can provide rapid confirmation of the identity of unknown substances 11. In the present study the melting point for the compound, ATBC3, ranged from 261-263⁰C, thus the isolated compound was identified as friedelin. The compound was further confirmed by spectroscopic techniques.

The UV-Vis profile of isolated fraction was taken at the 200 to 900nm wavelength due to the sharpness of the peaks and proper baseline. The UV signal at 210- 217nm was reported for triterpenes 12, 13. The UV-Vis spectrum of the pure compound from the plant A. tetracantha (ATBC3) was found to be 211nm with an absorbance of 0.586, indicating the compound to be a triterpene (Fig. 3). 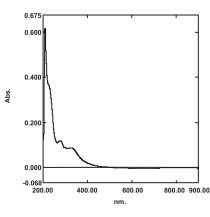 The molecular mass of a compound and its elemental composition can be easily determined by mass spectroscopy. Further, this method utilizes a very little amount of the test sample and gives molecular weights accurately 17. In the present study also, the isolated compound, ATBC3, exhibited a fragmentation pattern of m/z 426, 411, 273, 123 and 109. The LCMS mass spectrum showed a basic peak (m/e) at 426.4, which corresponds to the molecular mass of the compound, ATBC3. The other important peaks of fragments were at 380, 354, 282, 209, 168 135 and 123 (Fig. 5). 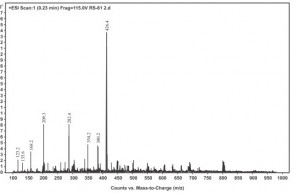 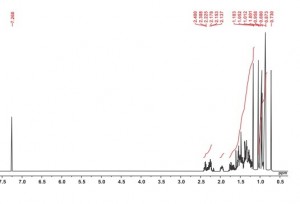 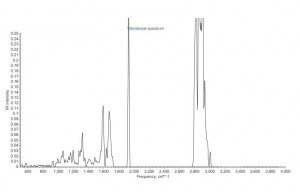