ABSTRACT: Fifteen soil samples were collected from different locations near Nagpur i.e. from Nagpur, Bhandara and Chandrapur. Air drying and pre-treatment of soil samples with CaCo3 (1%) were found to be most effective for isolation of actinomycetes. Five different selective media were used for the isolation of actinomycetes and the best growth was observed in yeast malt extract agar medium with 1 mg/ml cycloheximide as antifungal agent and by using double layer agar technique for isolation. Significant differences were found between the counts of actinomycetes on different media. Total 78 actinomycetes species were isolated. More number of actinomycetes were isolated from Nagpur region (32 x 10 cfu/g) as compared to Bhandara (28 x 10 cfu/g) and Chandrapur (18 x 10 cfu/g) regions. Out of 78 isolates 23 isolates showed positive results in primary screening. Maximum isolates showed activity against B. subtilis, B. cereus, S. aureus and E. coli. Few isolates showed activity against P. vulgaris, P. aeruginosa, C. albicans and A. niger. Noactivity was seen against Penicillium sp. From 23 isolates 20 isolates showed good results in secondary screening. Finally one isolate was selected for further identification based on its broad spectrum activity and larger zone of inhibition compared to others. Phenotypic identification and biochemical and physiological characteristics of the isolated species were performed at MTCC Chandigarh and was identified as Streptomyces violaceorubidus and the strain was designated as RC 1796. These investigations clearly indicate that Nagpur and nearby area is a potent source for the isolation of bioactive actinomycetes useful for production of antimicrobial substances.

INTRODUCTION: Actinomycetes are Gram positive bacteria which possess many important and interesting features 1. They are widely distributed in soil, water and colonizing plants. They are one of the major groups of soil population which may vary with the soil type 2. The isolation of Actinomycetes from mixed microflora present in soil is difficult because of their slow growth compared to other bacteria 1, 2, 3. Actinomycetes possess extraordinary biosynthetic capability of producing antibiotics.

They are responsible for the production of about half of the discovered bioactive secondary metabolites notably antibiotics 4, 5, antitumour agents 6 enzymes 7, 8 and immunosuppressive agents 9. It is because of these unique biosynthetic properties that actinomycetes are of industrial interest for several decades. Hence efforts are done on successful isolation of novel actinomycetes from terrestrial sources for drug screening programs in the past few years.

Soil sampling and processing: Fifteen soil samples were collected from different locations like agricultural field, lakes, rivers, canals etc. from Nagpur and nearby region i.e. from Nagpur, Bhandara and Chandrapur region. Every sample was a mixture of soil collected from 5 to 6 holes whose depth was around 10 to 30 cm. The surface layer of soil was removed and the central portion was collected in sterile plastic bags with the help of polyvinyl corer (previously sterilised with alcohol). Soil samples were air dried in laminar airflow (HICON) for 24 hrs. at room temperature and was stored at 4oC until processed 11.

Calcium Carbonate soil treatment: All the soil samples were pre-treated with CaCo3 to reduce the number of vegetative bacterial cells, while allowing many actinomycetes spores cells to survive 12.  Air dried soil sample (10 g) was taken in a mortar, was triturated with 1%  CaCo3 and was incubated at 30°C for 2 days in a closed sterile petridish. A high relative humidity was maintained in the petridish by water saturated filter paper 13. To study the effect of CaCo3 treatment soil samples withoutCaCo3 were used as control 11.

Isolation of Actinomycetes: One gram of each air dried soil sample and the sample containing CaCo3 were suspended in 100 ml of sterile distilled water and the flasks were rotary shaken at 150 rpm for 30 min. From this suspension dilutions were prepared as 1:10, 1:100, 1:1000 and 1:10000 in distilled water 14. Each diluted suspension was placed on different types of media by spread plate technique, double layer agar technique 15 and by overlaying on the medium 0.22 to 0.45 µm pore cellulose ester membrane filter and inoculating the sample on the filter for isolation 3. The different media used for isolation were starch casein agar (SCA), yeast malt extract agar (YMEA), nutrient agar (NA), maltose yeast extract agar (MYE), and kenknight and munaier’s (KM) medium 16. 1 ml of antifungal antibiotic cycloheximide prepared in distilled water (1mg/ml) and sterilized by autoclaving for 15 min at 121°C was mixed in each media.  The plates were incubated at 28°C for 6 to 7 days.  Typical actinomycetes colonies (rough chalky) were selected and further isolated by streak plate technique. Single isolated colonies were transferred on slants and stored at 4°C until further use 15.

Primary screening:  The antibacterial activities of the isolates were determined on YMEA media by perpendicular streak method 17. Isolated actinomycetes were cross streaked as a single line on solidified YMEA media in a petridish and were incubated at 28°C for seven days. The test organisms were then cross streaked perpendicular to the original streak of isolates as shown in Figure 1. The different test microorganisms used were S aureus (NCIM 2079), B. subtilis (NCIM 2063), P. areuginosa (NCIM 2200), E. coli (NCIM 2065), P. vulgaris (NCIM 2813), C. albicans (NCIM 3471), A. niger (NCIM 512) and Penicillium sp. (NCIM 1108) which were procured from National Collection of industrial microorganism (NCIM) at National Chemical Laboratory, Pune. The plates were incubated at 37°C for 24 to 48 hrs. for bacteria and at 25°C for 48 to 72 hrs. for fungi. The zone of inhibition was measured for each microorganism. Control plates of the same medium without actinomycetes growth were also simultaneously streaked with test organism to study their normal growth. 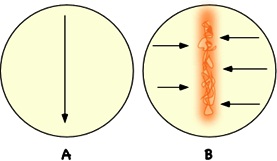 TABLE 1: AVERAGE OF CULTURABLE ACTINO-MYCETES COUNT FROM ALL CaCo3 TREATED AND WITHOUT CaCo3 TREATED SOIL SAMPLES ON DIFFERENT TYPES OF MEDIA 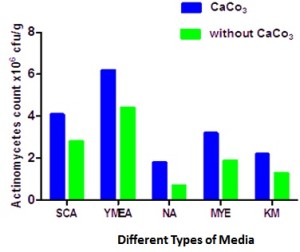 FIGURE 2: COMPARISON OF AVERAGE OF CULTURABLE ACTINOMYCETES COUNT FROM CaCo3 TREATED AND WITHOUT CaCo3 TREATED SOIL SAMPLES ON DIFFERENT TYPES OF MEDIA 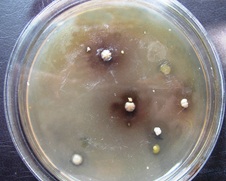 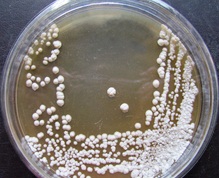 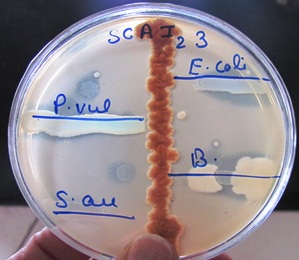 From the results of primary and secondary screening we can say that more no. of actinomycetes were active against gram positive bacteria (Bacillus subtilis, Bacillus cereus and Staphylococcus aureus) than those against gram negative bacteria (Escherichia coli, Proteus vulgaris and Pseudomonas aeruginosa).

The reason behind this may be due to the presence of outer polysaccharide membrane carrying the structural lipopolysaccharide components in gram negative bacteria. This makes the cell wall impermeable to lipophilic solutes.

The gram positive bacteria are more susceptible because it carries only outer peptidoglycan layer which is not an effective permeability barrier21. Out of 20 isolates studied for secondary screening 100% isolates were showing positive results against B. subtilis and B. cereus. 75% isolates were active against S. aureus, 55% against E. coli, 40% against P. vulgaris, 35% against C. albicans, 25% against A. niger, 5% against P. aeruginosa and none against Penicillium sp.

From these isolates, actinomycetes sp. A2was having the best antibacterial activity showing maximum zone of inhibition against most of the micro-organisms as shown in Table 2 and hence it was further selected for identification. 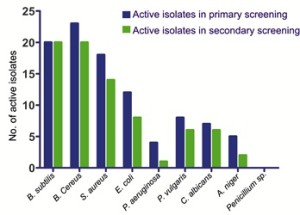 Morphological, physiological and biochemical characteristics of isolate: Biochemical and physiological characteristics of actinomycete sp. A2 were performed at MTCC Chandigarh. Based on the results the isolated species was identified as Streptomyces violaceorubidus and the strain was designated as RC 1796. The tests performed and the results are depicted in Table 3. Scanning electron microscope studies showed spore chain structure of actinomycetes sp. A2 as shown in Figure 7.

TABLE 3 : BIOCHEMICAL AND PHYSIOLOGICAL TESTS OF ACTINOMYCETES SP. A2 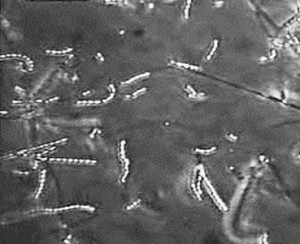 CONCLUSION: Hence it was concluded that the objective of the proposed project was achieved. Actinomycetes were isolated from different locations in and around Nagpur. The isolated actinomycetes species having antimicrobial activity was identified from MTCC Chandigarh as Streptomyces violacerorubidus and the strain was designated as RC 1796. This investigation clearly indicate that Nagpur and nearby area is a potent source for the isolation of bioactive actinomycetes.