INTRODUCTION: Microorganisms play a very important role in our lives. They are found in almost every habitat present in nature like soil, water, air, spoiled bread, and various foodstuff. Microorganisms have been exploited in a number of ways by human beings for their benefit. They are used to produce a wide variety of pharmaceutical products and assist in maintaining and improving the environment 1. The selection and use of microorganisms in industrial microbiology are challenging tasks that require an understanding of microbial growth as well as its interactions with other organisms.

Different metabolites are produced at various phases of the growth of the organism. Primary metabolites such as enzymes and peptides/proteins, which are essential for the life, are produced in the exponential phase of microbial growth, whereas secondary metabolites (antibiotics), which are not required for the life cycle, are produced under sub-optimal growth conditions near the end of the exponential phase or in the stationary phase of growth 4. The first reaction in the metabolism of cholesterol is its oxidation to 4-cholest-en-3-one 5. After the breakdown of cholesterol by COD, the 4-cholestene-3-one is formed as the end product, with a molecular formula of C27H44O. It has clinical importance as an anti-obesity agent. It is also used for the prevention of various other diseases such as arteriosclerosis, cancers, and diabetes mellitus associated with obesity. Since it has a very good therapeutic importance, it is used by pharmaceutical industries as pills, capsules, tablets, powder, and suspensions. It is also used in food, where it is either added directly or as immersion 6. Therefore, the study of cholesterol metabolism, the stability, and the substrate specificity of CODs via protein engineering techniques could be useful to understand its effect in pathological techniques and also the development of new organisms with potential use as biotechnological and pharmaceutical tools.

Cardiovascular diseases are major health problems with multifactorial etiology and need a quick, accurate diagnosis and therapeutic strategy7. Cholesterol in serum is a general biochemical marker for the prognosis of atherosclerosis and other lipid disorders. Higher levels of cholesterol in the blood are closely related to an increased risk of heart disease; hence for better therapy, an adult should be routinely screened for elevated cholesterol level 8. The need for accurate cholesterol levels in serum has encouraged studies related to the development of methods for its routine assay that are fast, easy, and reproducible. An extensive range of the pharmacological assay is presently flooding the market for the detection of cholesterol levels in serum, but the operating costs of measurement are very high.

In order to overcome these effects, investigations have been extended for the search of novel microbes producing COD with improved efficacy and broader applications. Microbial COD is a very important enzyme at a commercial scale, generally employed by laboratories for the determination of cholesterol level in serum. For substantial commercial viability of the COD enzyme, technologies based on novel isolates and optimum fermentation conditions for producing COD needs to be investigated. The present study was aimed at studying the production, purification and characterization of COD from novel microbial isolates.

Screening and Isolation of Potential Microorganisms Producing Cholesterol Oxidase Screening of Microorganisms Producing Cholesterol Oxidase: Soil samples were collected from the effluent sediments from Jajmau, Kanpur in U.P. India. One gram of the soil sample was suspended in 10 ml of normal saline (NaCl 0.85%, w/v) and vortexed vigorously for 2 min. The soil particles were allowed to settle, and 1 ml of the supernatant was serially diluted, and 100µl of the sample was spread on cholesterol enrichment medium plates and incubated at 30 °C for 7 days. Isolated colonies were picked up and streaked on nutrient agar (HiMedia, India) for bacterial cultures and YMG agar Fig. 1 for Amycolatopsis sp cultures. Single colonies that appeared on these plates were further screened. 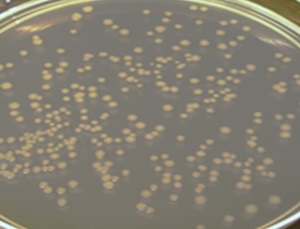 COD converts cholesterol into 4-cholesten-3-one and hydrogen peroxide. O-dianisidine of the medium reacts with hydrogen peroxide (H2O2) to form azo compound (Schiff’s base) which turns the color of the medium into intense creamish color. Colonies showing intense creamish color in surrounding were picked up as COD producers and used for further study. 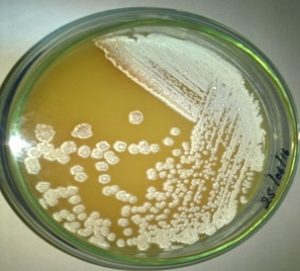 Identification of Cholesterol Oxidase Positive Bacterium: Molecular identification of the bacterial strain FH68 was carried out by amplifying the 16S rRNA gene. The forward primer: AGAGTTTGATCMTGGCTCAG and reverse primer: GYTACCTTGTTACGACTT were used. The product was sequenced using BDT v3.1 Cycle sequencing kit on ABI 3130 Genetic Analyzer. The consensus sequence of the 16S rRNA gene was generated from forward and reverse sequence data using aligner software. The 16S rRNA gene sequence was used to carry out BLAST analysis with the NCBI GenBank database. Based on the maximum identity score, the first ten sequences were selected and aligned using multiple alignment software program ClustalW. A distance matrix was generated using RDP database and the phylogenetic tree was constructed using MEGA 4 software.

To identify the strain at molecular level, 16S rRNA homology studies were performed. Partial sequencing of 16S rRNA was done at Akaar biotech Lucknow, India. Closely related homologs were identified by comparing the above obtained partial 16S rRNA sequence of the isolated strains with the database of nucleotides at the National Center for Biotechnology Information (NCBI) webserver (http://www.ncbi.nlm.nih.gov), using the standard nucleotide BLAST program. Pairwise sequence alignment of strain with closely related (99%) homolog was studied through CLUSTALW v1.83 (http://www.ebi.ac.uk/clustalw).

Phylogenetic Analysis of Isolates: A phylogenetic analysis of strain was performed to predict the species level characterization of the isolates. The phylogenetic tree was constructed using the neighbor-joining method (Saitou and through multiple sequence alignment program of Mega 4 (http://www.kumarlab.net/publications). Detailed screening and isolation procedures for COD producing microorganisms led to the selection of one strain Amycolatopsis sp. (K1), for further studies.

Soil Screening and Isolation of Potential Microorganisms Producing Cholesterol Oxidase: Soil samples were collected from the Jajmau, Kanpur, India, and used for primary screening of COD producing microorganism. Screening of the soil samples led to the isolation of ten bacterial, which were able to grow on cholesterol medium containing cholesterol as the sole carbon and nitrogen source. A low number of microbial colonies were observed on cholesterol plates due to the ability to utilize cholesterol for their metabolic activities and growth. All the isolates were further subjected to secondary screening.

Cholesterol Oxidase Indicator Plate: During the secondary screening of COD producing microorganisms, Amycolatopsis sp. showed cream color pigmentation on cholesterol indicator plates due to the formation of Azo compound Fig. 3. These isolates were taken up for further studies. The results of primary screening and COD indicator plate assay are subjective and provide no information about the level of COD production by the microorganisms. The final selection of the microorganisms was based on quantitative measurements of the COD activity under submerged culture conditions. 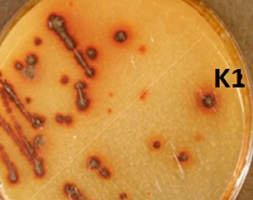 Culture Characterization of the Isolate (K1):

Molecular Identification of the Isolates (K1): Genetic relatedness is provided with rapid and objective identification of the isolates compared to the traditional phenotypic characterization. Genes coding for rRNA are highly conserved, and their sequence analysis is used for inferring the evolution of taxa through billions of years. Further, species-level identification was performed through computational analysis. Results of Basic Local Alignment Search Tool (BLASTn) concluded that partial 16S rRNA gene sequence (1478 base pair) of the isolate was found to possess close similarity (99-98%) Streptomyces rimosus subsp. rimosus (NR024762.1) Table 1.

Finally, on the basis of evolutionary distances calculated through the neighbor joining method, the phylogenetic tree constructed with Mega 4 was categorized into two major clads, Fig. 4. Both clad were further divided into two sub-clads viz., sub clad 1.1, 1.2, and 2.1, 2.2, respectively. The sub-clad 1.2 and 2.1 leads Amycolaptosis japonica strain MA 417CF17 and Amycolapotasis reqifeucin strain GY080 alone, respectively, whereas sub-clad 1.1 and 2.2 further divided into two branches, 1.1.1 containing Amycolatopsis decaplanina strain DSM 44594 and Amycolatopsis keratiniphila strain D2. The above phylogenetic tree confirmed the maximum similarity of the isolate with Amycolatopsis orientalis strain IMSNU 20058. The Amycolatopsis orientalis strain IMSNU 20058 has been deposited at Akaar Biotech Lucknow, India, and its 16S rRNA sequence has been submitted to the NCBI GenBank database under accession number SUB 6244430 Fig. 4. 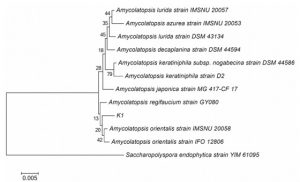 TABLE 1: THE ALIGNMENT RESULTS OF NUCLEOTIDE SEQUENCE OF SAMPLE AM WITH RESPECT TO 10 CLOSELY RELATED HOMOLOGOUS SEQUENCES DURING NCBI NBLAST SEARCH

DISCUSSION: Cholesterol oxidase (COD) is a FAD-containing flavor-oxidase that catalyzes the oxidation of the C3-OH group of cholesterol to give cholest-5-en-3-one and its isomerization to cholest-4-en-3-one 12. COD is used to determine cholesterol levels in food and blood serum by coupling of the enzyme with peroxidase 13. Increasing demand for specific estimation of steroids in clinical samples has enhanced the importance and need for COD in the pharmaceutical industry. It is also used in the production of precursors of hormonal steroids like estrogen, progesterone, and testosterone from cholesterol. It is currently being used in organic synthesis and in the oxidation of non-steroidal compounds. In addition, COD has also been reported to show insecticidal properties, bacterial pathogenesis 14, and biosynthesis of macrolide antifungal antibiotics 15.

he present study, screening of soil samples from Jajmau, Kanpur lead to the isolation of ten bacterial cultures, which were able to grow on cholesterol medium containing cholesterol as the sole carbon and nitrogen source. Among K1 was found to be good producer of COD. Production of COD was further verified by indicator plates assay showing the intense cream color pigmentation due to the presence of o-dianisidine of the medium reacts with hydrogen peroxide (H2O2) to form Azo compound (Schiff‟s base), which turns the color of the medium into intense cream color 9. Amycolatopsis isolates (K1) have been further identified by morphological and physiological studies 11.

Their large size and multiple domains allow the comparison of accumulation of sequence changes, which can be defined as the rate at which mutations become fixed over time. Genes of rRNA shows a high degree of functional constancy, as they occur in all organisms, but different domains in their sequence change at very different rates, allowing most phylogenetic relationships (including the most distant) to be measured 18.

CONCLUSION: In the present study, the potential of Amycolatopsis K1 for cholesterol oxidase production has been investigated. Sequence analysis of the PCR-amplified 16S rRNA gene indicated that isolates showed maximum similarity to Saccharopolyspora endophytica strain YIM 61095 Amycolatopsis K1 could be used as a promising, efficient source for cholesterol oxidase production.

ACKNOWLEDGEMENT: The authors wish to thank the Microbiology lab, Biotech Park, Lucknow for providing support, materials and equipment for the work.