ABSTRACT: Spinacia oleracea L. (child spinach) is a generally new leaf vegetable in the Amaranthaceae family. The crop is high in human supplements and generally has significant degrees of bioactive mixtures like nutrients A also C and minerals. In the present study, the fungi and bacteria from the infected leaves of Spinacia oleracea are isolated and morphological identified. DNA isolation of the cultured fungi and bacteria was done. The isolated genomic DNA was amplified using the internal transcribed spacer region and 16s rRNA region. The new DNA sequences were identified at the genus and species level using the BLAST software tool (NCBI, USA), deposited in (The National Center for Biotechnology Information) NCBI, and got Genbank accession numbers. The DNA sequences that showed maximum similarity to query sequences were selected and analyzed using MEGA 11.0 (Molecular Evolutionary Genetics Analysis) for phylogenetic analysis. The phylogenetic tree was generated based on the Neighbour-joining method.

INTRODUCTION: Spinach (Spinacia oleracea L.), a yearly plant, is a green, verdant vegetable that can be filled in both spring and harvest time 1. The dietary benefit of new spinach, with 91% of dampness content, shows somewhere in the range of 0.4% and 0.6% lipid content, around 2.9% protein content, and contains great degrees of fundamental amino acids, aside from sulfurous amino acids (methionine) and tryptophan 2, 3. Albeit the carb content is extremely low (2%-10%), the fiber content is high (2.2%). There are various medical advantages related to the utilization of spinach, and these are ascribed to its lipid-bringing down properties and cardiovascular

assurance, antiobesity impacts, hypoglycemic action, mitigating impacts, anticancer properties, neuronal insurance, antimacular degeneration, among others 4. New spinach is ascribed cell reinforcement properties since it contains a lot of phenolic or flavonoid compounds, chlorophylls, ferulic corrosive and caffeic corrosive, quercetin, patuletin, spinacetin and jaceidin, which are fundamentally found in the leaves, with the greatest levels in the mid-year 5.

Leaf spot illnesses can decrease spinach quality and yield, especially for new business sectors 6. Deciding the causal specialists of different leaf spot sicknesses on spinach, their relative recurrence, pathogenicity on business spinach cultivars and fungicide viability against these microbes is fundamental for successful illness on the board. The motivation behind this examination was to decide the major and minor fungal and bacterial microbes causing leaf spot illnesses on spinach 7. The present investigation aims to collect the plant pathogens from Spinacia oleracea infected leaf samples, isolate plant pathogens, and culture the associated fungi and bacteria. The cultured fungi and bacteria were identified using lactophenol dye, sequencing, and phylogenetic analysis.

Collection of Plant Samples: The plant species Spinacia oleracea infected leaves were collected from palakarai locations, Tiruchirappalli. Tests will be arbitrarily cut off with an ethanol-cleaned sickle and put independently in sterile polythene packs to keep away from dampness misfortune. The collected species were taken care not to damage the leaves for the culture of plant pathogens. The materials were transported to the laboratory within 12h and stored at 4 °C until isolation procedures were completed.

Culture of Endophytic Fungi and Bacteria: The gathered examples are washed completely with sterile refined water and air-dried before handling them. The contaminated leaves were surface disinfected by drenching them successively in 70% ethanol for 3 min and 0.5% Sodium hypochlorite for 1minute and washed completely with sterile refined water. The abundance of water is dried under a laminar wind stream chamber. Then, at that point, with a sterile surgical tool, tainted leaves of 0.5cm size are painstakingly analyzed and put on Petri plates containing Potato Dextrose Agar. The media are enhanced with streptomycin sulfate (100mg/L) to smother bacterial development. The plates are then brooded at 25±2 °C until contagious development showed up. The plant fragments are noticed once every day for the development of endophytic parasites. The 1gram of infected leaves were serially diluted and spread in nutrient broth and incubated at 37 ºC for the growth of bacteria.

Morphological Identification: Morphological distinguishing proof of growth was done by lactophenol staining and microscopic organisms were completed by gram staining.

Molecular Characterization of Fungal and Bacteria Isolates: Distinguishing proof of contagious endophytes and microscopic organisms secludes had been finished utilizing DNA sequencing. Contagious endophytes are developed on PDA Broth (Himedia) by setting agar squares of effectively developing unadulterated culture (3mm in breadth) in 250ml Erlenmeyer jars containing 100ml of the medium. The cups were hatched at 25±2 °C for a considerable length of time with periodical shaking at 70 rpm. After the hatching time frame, just the way of life effectively filling in PDA Broth were taken out and separated through sterile cheesecloth to eliminate the mycelial mats.). An altered organism DNA extraction strategy was utilized to separate DNA from growths 8 the microscopic organisms developed in Nutrient stock by adding the unadulterated culture in the 250 ml funnel-shaped carafes containing 100 ml of the medium. The carafes were hatched at 37±2 °C for 24 h with shaking.

Data Analysis: The new DNA groupings were recognized utilizing the BLAST programming device (NCBI, USA). The groupings were stored in the NCBI. The DNA groupings that showed the most extreme similitude to question successions were chosen and dissected utilizing MEGA 7.0 (Molecular Evolutionary Genetics Analysis) for phylogenetic examination. The phylogenetic tree was produced given the Neighbor-Joining Method.

Fungal and Bacterial Isolation from the Infected Leaves from Spinacia oleracea: Practically, all the parasitic hyphae and microscopic organisms were detached from the dull brooded plates and bacterial stock. Plate 1 shows the mycorrhizal confines of growths species developed on PDA were white and needed spores.

Mycelium was floccose in the beginning phases of development, yet as culture matured, mycelia turned progressively obvious to the agar surface regularly into huge clusters. Almost 2 mycorrhizal endophytes growths and 3 microbes’ strains were segregated from tainted leaves from Spinacia oleracea. Mycorrhizae related to Spinacia oleracea were fundamentally endophytic. 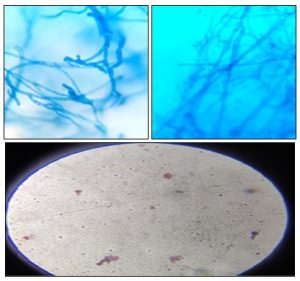 DNA Isolation, Amplification and Sequencing: DNA isolation of cultured fungi was carried out successfully and purified using Sodium acetate- ethanol precipitant, and bacteria were carried out successfully and purified using the modified CTAB - method. The isolated genomic DNA was amplified using PCR and the amplicons were obtained approximately at the length of 500 - 850bp for the ITS and 16srRNA region.

The amplicons were eluted and sequenced using forward and reverse primers, and the sequence chromatograms were successfully obtained.

The proportion of sites where at least 1 unambiguous base is present in at least 1 sequence for each descendent clade is shown next to each internal node in the tree. This analysis involved 5 nucleotide sequences. All ambiguous positions were removed for each sequence pair (pairwise deletion option). There were a total of 811 positions in the final dataset. Evolutionary analyses were conducted in MEGA11 11.

CONCLUSION: Mycorrhizal fungi and leaf spot Bacteria were successfully isolated from the Spinacia oleracea infected leaves belonging to the regions of the palakarai Area, Tiruchirappalli. From the cultured fungi and Bacteria, DNA was isolated, amplified, and sequenced using the ITS region and 16s rRNA region. The phylogenetic tree obtained by MEGA 11.0 suggests that the two fungi and three bacteria isolated from Spinacia oleracea infected leaves.