ISOLATION AND CHARACTERIZATION OF NATURAL PRODUCT COMPOUNDS FROM RHIZOMES OF CYPERUS ROTUNDUS LINN.

ISOLATION AND CHARACTERIZATION OF NATURAL PRODUCT COMPOUNDS FROM RHIZOMES OF CYPERUS ROTUNDUS LINN.

INTRODUCTION: Cyperus rotundus Linn. is commonly known as nut grass or nagarmotha, belonging to the family Cyperaceae and originated in India as a weed 1. C. rotundus is a traditional medicinal plant appearing among Indian, Chinese and Japanese natural drugs, used for the treatment of spasms stomach disorder and anti-inflammatory diseases 2, 3, 4, 5. C. rotundus have been reported to contain oils, alkaloids, glycosides, saponins, flavonoids, tannins, starch, carbohydrates 6, proteins 7 and traces of Mg, V, Cr, Mn and Co 8.

Monoterpenes and sesquiterpenes are isolated from this plant and showed in vitro antimalarial activity9. C. rotundus had remarkable hypotensive and antipyretic effects 10 and also exhibits anthelmintic properties 11.

The alcoholic and aqueous extracts of C. rotundus also exhibit hepatoprotective activity 12. Rhizomes of C. rotundus have been used in ancient medicine in India for fever, dysentery, pruritis, pain, vomiting and various blood disorders 13. The methanol extract of the rhizomes has been found to inhibit nitric oxide and superoxide production in murine macrophage cell line 14. The tubers of the plant are used in folk medicine as sedative, carminative, stimulant, tonic, aphrodisiac, diuretic, stomachic, colic remedy and used to remove renal calculi 15, estrogenic, antiemetic 16, in diarrhoea and women’s diseases 17.

Dried tuberous roots is a source of aromatics and useful in perfumery 18. The rhizomes of the plant have been also recommended for the use in several clinical conditions like fever and arthritis 19. Rhizomes are cooling, intellect promoting, nervine tonic, diuretic, antiperiodic, and used to treat diarrhoea, leprosy, bronchitis, analgesic and amenorrhea 20, 21.

Plant Material: The plant material, rhizomes have been collected from the surroundings of Jaipur and the authenticity of the plant was done by the Department of Botany, University of Rajasthan, Jaipur (voucher no. RUBL-3092).

Extraction and Isolation: Shade dried rhizomes (5kg) of title plant were powdered and extracted with Petroleum ether on a steam bath for (12 × 3) h. The extract was concentrated under reduced pressure. The syrupy mass so obtained was treated with acetonitrile for the removal of fats to run the column smoothly. The fat free extract was chromatographed over silica gel column and eluted with the solvent of increasing polarity where compounds I to IV were isolated, purified and characterized. 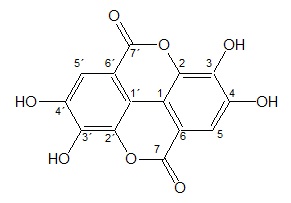 Compound II: The elemental analysis and molecular weight determination indicated its molecular formula as C11H10O3. The appearance of blue green colour in UV light indicated its coumarin nature. The important peaks observed in the infrared spectrum were at 3500 (-OH stretching), 1720 (coumarin lactone), 1615, 1560, 1570, (aromatic C=C) and 1130 (O=C-O) cm-1. In the 1H NMR spectrum the presence of three protons were observed in the aromatic region. A doublet at 6.77 (J = 8 Hz) corresponded to C-8 proton which was ortho coupled to C-7 proton which appeared as a double doublet at 7.33 (J = 8, 2 Hz). The third aromatic proton (C-5) was observed as a doublet at 7.33 (J = 2 Hz) which was placed meta to C-7 proton. In addition to this, two methyl singlets appeared at 2.15 and 2.35 which could be placed at C-3 and C-4 respectively. In the mass spectrum, the molecular ion peak was observed at m/z 190, which served as the base peak also. Prominent peaks appeared at m/z 175 (M+CH3), 162[M+-2CO]. From these spectral data the structure of compound was established as 6- hydroxy- 3, 4- dimethyl coumarin. 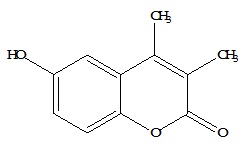 Compound III: The elemental analysis and molecular weight determination indicated its molecular formula as C11H8O5. The positive Labat test and colour with acidified phloroglucinol indicated the presence of methylenedioxy group. In the UV light indicated its coumarin nature. The important peaks observed in the infrared spectrum were at 1720 (C=O), 1620, 1590, 1560, (aromatic C=C) and 1130 (O=C-o) cm-1. The 1H NMR spectrum exhibited signals due to three aromatic protons appearing as two doublets at  7.57 and 6.27 (AB system, J = 9.6 Hz, C-3, C-4 protons) and a singlet at 3.93 and two proton singlet at 6.16, corresponded to the presence of methoxy and methylenedioxy group in the compound. In the mass spectrum the molecular ion peak was observed at m/z 220. Prominent peak also appeared at m/z 205 [M+-15], 192 [M+-28] and 177 [M+-43]. On the basis of above discussion the structure for the compound was assigned as 6-methoxy-7, 8-methylenedioxy coumarin. 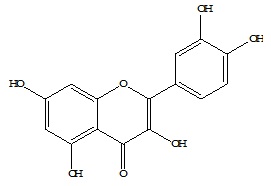 CONCLUSION: Petroleum ether extract of Cyperus rotundus rhizomes have a range of different class of natural compounds. These compounds have very useful medicinal activities so present work gives a direction for future investigators to get some medicinally important drugs.