ABSTRACT: An RP-HPLC method to be used to quantitate the amount of a biomarker in the roots of Paullinia pinnata was developed. The root bark was milled and extracted and the dry powder obtained taken through column chromatography (CC). The biomarker was then isolated. The melting point of the biomarker was determined and found to be 117-119 oC. A RP-HPLC method was successfully developed and used to quantify the biomarker in the chloroform extract. The mobile phase used was Methanol:Water (9:1) with an injection volume of 100µl and a range of 1.000. The method employs a Phenomenex Kromasil C-8, 5µ, 250mm × 4.6mm, 100Ǻ reverse phase column at a flow rate of 1.3ml/min, and a wavelength of 210nm. The method gave a retention time of 2.9687 ± 0.2657 (n=15). The percentage content of the biomarker in the root of Paullinia pinnata was determined to be 0.052009±0.004321% w/w (n=12). The HPLC method was validated for linearity, repeatability, intermediate precision, and robustness. The limits of detection and quantitation were also determined

INTRODUCTION: Traditional plant medicine continues to play a major role in the Ghanaian healthcare system. The WHO has stated that about 70% to 80% of people in developing countries have resorted to the use of complementary or alternative medicine (CAM) at one point in time or another 1.  The use of CAM in these countries is largely traditional, having been passed on from generation to generation. These traditions however rely heavily on empirical evidence and anecdotal accounts of the benefits of the use of the various healing materials and techniques.

It has therefore been a focus of the Faculty of Pharmacy & Pharmaceutical Sciences, KNUST to conduct scientific experiments to substantiate the claims of efficacy and determine through isolation the compounds responsible for the activities of the plants 2–6.

Paullinia pinnata is a plant that has been used locally for the management of wounds in Ghana. The scientific basis of the use of the plant for wound healing has been investigated and confirmed 7. It is known locally as Toa-ntini. There are various reports of its use in erectile dysfunction, coughs and pulmonary diseases, and as an antioxidant 8.

In recent times scientific interest in plants employed in wound healing has gained some ground. This is in view of recent developments with regard to in vitro bioassays 9. Various parts of Paullinia pinnata including more recently the roots have been investigated for their chemical composition. Two novel compounds namely 6β-(3′- methoxy-4′-hydroxybenzoyl)-lup-20(29)- ene - one and 6β-(3′-methoxy-4′-hydroxybenzoyl)- lup-20(29)-ene-ol, together with three known compounds, friedelin, β-sitosterol and β-sitosterol-3-D-glucoside have been isolated from the root of the plant 10. The two novel compounds displayed significant fibroblast stimulatory activity 10.

Most medicines from plant sources are used in huge doses (measured in cups and number of tablespoons) and may result in fatal consequences for patients if the plants contain toxic compounds. It has therefore become necessary to include the quantification of the various active principles found in the medicinal plants in the research effort in traditional medicine. Knowledge of the quantity of an active antimicrobial principle in a unit amount of a whole extract of its plant taken for an infection will help to estimate the dose and duration against the background of information regarding the minimum inhibitory concentration, among others, of that active principle.

In view of the above, a biomarker was isolated from the roots and quantified using a RP-HPLC method developed.

The Paullinia pinnata material was obtained in April 2012 from of the department of Pharmacognosy, KNUST and authenticated at the department.

The coarsely powdered plant material (5.4kg) was extracted with about 15L of chloroform (CHCl3) using a soxhlet extractor for 48 hours till the plant material was well exhausted. The extract obtained was concentrated using a Bucchi rotavapor under reduced pressure to a syrupy mass. The syrupy mass was then transferred into a crucible and air dried to obtain a brown powder of weight 41.67g which was transferred into a glass bottle and kept in a desiccator for later use.

The biomarker was isolated from the chloroform fraction (7.0g), which has been determined to be the active fraction10, by column chromatography using silica gel (70–230 mesh from BDH). Gradient elution was carried out using petroleum ether containing increasing amounts of ethyl acetate. Fractions were collected and bulked into eighteen sub fractions C1 to C18 based on their profiles on TLC plates and air dried. The components of the dried sub fractions were re-dissolved using petroleum ether, ethyl acetate, chloroform and methanol.

The content of fraction C3 was dissolved with chloroform. Insoluble orange to yellow crystals were observed at the base of the container. These crystals were filtered out. Methanol was then added to the filtrate after which white amorphous crystals precipitated out and was filtered. The crystals were washed repeatedly with methanol and air dried to afford the biomarker.

High performance liquid chromatography (HPLC): Five mg of the isolate was dissolved in 1ml of ethyl acetate, transferred into a 50ml volumetric flask and topped up to the 50ml mark using methanol/water (90:10) to give a stock solution of concentration 0.01% (w/v). Solutions A - E of concentrations of 0.001%, 0.0006%, 0.00036%, 0.000216%, and 0.0001296% respectively were prepared from the stock. Solution A was scanned between a wavelength range of 200nm and 400nm with the T90+ UV-VIS Spectrometer (PG Instruments) using 1ml ethyl acetate in 25ml methanol as the blank and the wavelength of absorption determined. The solutions were then injected into the HPLC and their peak areas noted and recorded.

Milled P. pinnata roots (361.67g), was exhaustively extracted with 2.5L of chloroform. The extract was then concentrated to a volume of 500ml. 10ml of the resulting solution was pipetted into a 100ml volumetric flask and made up to volume using methanol. The resulting solution was labeled EA. 10ml of EA was then pipetted and transferred into a 100ml volumetric flask and also made to volume using methanol and labeled EB.

The method developed was validated according to the ICH protocol for linearity, repeatability, intermediate precision, robustness and limits of detection and quantification11.

The biomarker was isolated as a white amorphous powder with melting point 117-119 oC. 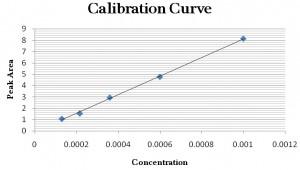 For repeatability, six determinations were made for solution E of concentration 0.0001296% (w/v). The Relative Standard Deviation (RSD) was then calculated to determine if the method developed has intra-day precision.

TABLE 4: REPEATABILITY OF THE METHOD FOR THE ISOLATED BIOMARKER

The intermediate precision of the method developed was also determined. Solution E was run on three different days.

The amount of root sample used for the preparation of the 500ml extract is 361.67g.

TABLE 8: % CONTENT OF BIOMARKER FOR 1 IN 100 DILUTION OF STOCK SOLUTION

TABLE 9: % CONTENT OF BIOMARKER FOR 1 IN 10 DILUTION OF STOCK SOLUTION

The chemical shift obtained at δ 5.301 deviates only slightly from that obtained at δ 5.22 by Annan and Houghton 10 which was similar to the chemical shift of carbinol methine proton at H-6 in the 6β hydroxyl lupane derivatives reported by Dantanaranaya et al.12. The signal between δ 8 and δ 7 in the spectrum may be resulting from aromatic protons and may signify the presence of a substituted aromatic ring attached to a triterpenoid structure but is also characteristic of chloroform or deuterated chloroform, the solvent used for the analysis.

Using the 1H NMR spectra, the biomarker is suspected to be a 6β-(3-methoxy-4-hydroxybenzoyl) ester of lupeone. The identity of the biomarker is not absolutely confirmed due to the lack of 13CNMR

Following the isolation of the biomarker, an HPLC method was developed and used for the quantification of the amount of the biomarker in the roots of Paullinia pinnata. A number of conditions were tried during the method development and the method that yielded the best results with respect to the consistency of the peak shape and symmetry chosen.

The method/conditions chosen eluted the biomarker at a time of 2.9687 ± 0.2657mins (n=15). This retention time is quite short and can therefore be considered efficient for routine analytical work

The method developed and used for the quantitative analysis showed the root bark to contain 0.052009±0.004321% w/w (n=12) of the biomarker. This means that every 100g of root material contains about 52mg of the biomarker. This information is useful in determining the dosage and use of the plant material vis-à-vis information about the minimum concentration at which the fibroblast stimulatory activity or wound healing effect is achieved. Annan & Houghton 10 determined the EC50 of the biomarkers from the roots of Paullinia pinnata and noted that above certain concentrations, the biomarkers may have become cytotoxic as the proliferative activity decreased.

The biomarker was used as a secondary standard and the method developed used to determine the amount of the biomarker in the root extract. A calibration curve was therefore drawn to determine the concentration range within which the method gives a good linear relationship between the concentration of the biomarker and the peak area obtained. The results indicate that the method has a coefficient of regression (R2) of 0.9988. The ICH guidelines (1994) recommend a coefficient of regression value above 0.998 to indicate good linearity. The linearity of the methods holds true for concentrations between 1.296µg/ml and 11µg/ml.

The LOD and LOQ represent a measure of the sensitivity of a given method. The lesser the LOD, the more sensitive a method is. The LOD of the method developed was calculated as 0.464435µg/ml which means that the method is very sensitive to the biomarker being analyzed. The LOQ, much like the LOD, gives accurate information regarding the quantity of the analyte that can be correctly determined quantitatively. The lower the LOQ the more sensitive therefore the method is. The LOQ was calculated as 1.40738µg/ml which is low and signifies that using this method one can accurately determine microgram quantities of the biomarker.

The RSD of the results obtained for the repeatability study was calculated as 1.886792% and 1.765537% using the peak areas and the % purity respectively.

The intermediate precision of the method was also determined using six replicate determinations of one concentration level on three days. The RSD of the method in this respect was found to be 1.886792%, 1.183446% and 1.84418% for days 1, 2 and 3 respectively using the peak areas in the calculation. All values were below the recommended ≤2 mark and suggest good between-day precision of the method developed. The method showed good between-day precision as well when the %purity values were used in the calculation with RSD values of 1.765537%, 1.104847% and 1.715434% representing days 1, 2 and 3 respectively.

Robustness gives a measure of the ability of the method to give accurate results within variations of certain conditions. The method developed was found to be robust with respect to wavelength change. The RSD determined using 210nm and 220nm were found to be 1.894633 and 1.942877 respectively indicating that the method can be used satisfactorily at any of these wavelengths of measurement.

Based on the work that has been carried out in this project, I make the following recommendations

ACKNOWLEDGEMENT: The authors are grateful to the technicians of the Department of Pharmaceutical Chemistry, K.N.U.S.T., Kumasi, Ghana for their contribution to this study.