Cassia aungostifolia is a common herbaceous belongs to the family of Caesalpiniaceae. Seeds of plant contain gluco-mannose hence attempt to evaluate the seeds for suitability as tablet binder is considered and the present exploration repots the isolation of mucilage of Cassia aungostifolia seed. The DSC and FTIR thermograms of drug and mucilage indicated no chemical interaction. Phytochemical and Physiochemical characteristics of mucilage were studied which confirmed the mucilage nature. The mucilage was evaluated for its granulating and binding properties in compressed tablet using Diltiazem HCl as model drug. The granules prepared by mucilage were compared with xanthan gum, which was used as standard binder. The tablets had good physiochemical properties and the drug release was more than 95% within 2hr. It was observed that increasing the concentration of mucilage increases hardness and decreases the disintegration time. All the formulations were subjected to stability studies for three months as per ICH guidelines all four formulation showed stability with respect to release pattern and other parameters which confirm the use of mucilage as excipient.

INTRODUCTION: Seed gums are important agrochemical used in various industries worldwide. The growing industrial utility of these gums in the field of paper, textile, petroleum recovery and pharmaceutical industries has resulted in an impetus in India for intensified research on new sources of gums and their modified products. Cassia aungostifolia mucilage derived from the seeds of Cassia aungostifolia Linn. is a common herbaceous annual occurring weed throughout India commonly known as Tinnevelly Senna or Tanner’s cassia, is a well known source of sennosides 1.

This herb contains anthraquinones, flavonoids and flavan-3-ol derivatives1. Cassia aungostifolia has been used as natural medicine for the treatment of Anti-viral, anti-cancer and hypoglycemic 3.  The whole plant possesses medicinal properties useful in the treatment of skin diseases, inflammatory diseases, rheumatism, anorexia and jaundice 2.

Although, some work had already been carried out on seed but it seems that no work has been done on the suitability of Cassia aungostifolia mucilage as a binding agent in tablet preparation as compared to the relatively common natural agents as Acacia, guar gum and xanthan gum, using disintegration time, rheology and in vitro analysis as assessment parameters. Hence the present work was attempted to evaluate binding properties of seed mucilage of Cassia aungostifolia.

MATERIALS AND METHODS: Cassia aungostifolia seeds were procured from the forest of KORIA, Chhattisgarh, India. Diltiazem HCl was obtained as gift sample from Arvind remedies pvt. Ltd., Chennai. All other ingredient was of analytical grade and purchased from Loba chemicals, Mumbai.

Method A (Isolation of Mucilage from C. aungostifolia Defatted seed, MCAD): C. aungostifolia seeds Kernel’s powder (20g) were defatted by soxhlet extraction using petroleum ether as a solvent at temperature 60-70oC this was repeatedly extracted using hot water till the complete mucilage was extracted. The mucilaginous solution was then filtered through eight folds of muslin cloth. The mucilage was then precipitated by adding sufficient acetone. The extracted mucilage was then dried in microwave oven till it was completely dried. The obtained powder was then sieved to get fine gum powder 3.

Method B (Isolation of Mucilage from C. aungostifolia filtered seeds, MCAF): C. aungostifolia seeds Kernel’s powder (20g) was soaked in cold distilled water (200 ml) and slurry was prepared. Then slurry was mixed with 800ml of boil distilled water. The solution was boiled for 20 minutes under stirring condition in water bath. The resulting thin clean solution was kept overnight for settling protein and fibers. The solution is centrifuge at 5000rpm for 20 minutes. The supernatant was separated and poured in to twice the volume of absolute ethanol by continues stirring to precipitate the polysaccharides. The precipitate was washed with absolute diethyl ether and petroleum ether and then dried at 40-45oC and passed through sieve #120 and stored in desiccators until used for further studies 4-10.

Drug- Excipient Compatibility Studies: This study has been done to check whether there is any compatibility related problems are associated with drug and excipients used for the formulation of tablet. The drug and excipients must be compatible with one another to produce a product that is stable, efficacious, attractive and easy to administer and safe. If the excipients are new and not been used in formulations containing the active substance, the compatibility studies are of paramount importance. Thermal analysis and FTIR can be used to investigate and predict any physicochemical interactions between components in a formulation and can therefore be applied to the selection of suitable chemically compatible excipients.

FTIR Spectroscopy: The IR spectral analysis of a drug and other excipients were taken using Press pellet technique (using KBr). The IR spectra’s were determined by using Jasco FT-IR 410 11-14.

Differential Scanning Calorimeter Studies (DSC): DSC was performed on a Shimadzu DSC-60 (Shimadzu Limited Japan). A 1:1 ratio of drug and excipient was weighed into aluminum crucible and sample was analyzed by heating at a scanning rate of 100C/min over a temperature range 200-3000C under a nitrogen flow of 40ml/min. Reproducibility was checked by running the sample in triplicate15.

Acute Toxicity Study: The method was performed according to the OECD test guide line for testing of chemical TG 423 21. Healthy Wistar female rats fasted over night, but allowed access to water ad libitum. Animals were randomly divided in to five group (n=3). The controlled received water. Group I-IV were orally treated with MCFD and MCFF at dose of 50, 300, 2000, 5000mg/kg respectively the animals were observed at 15, 30, 60, 120 and 240 minutes with no intake of food and water and thereafter over a period of 24hrs. The rats were further observed for 14 days with food and water intake animals were monitored shown in table 1.

Preparation and Evaluation of Granules: Diltiazem HCl (DTZ) was used as model drug to formulate the granules. Microcrystalline cellulose was used as disintegrant, were lactose and aerosil was used as diluents and lubricant respectively, the composition is shown in table 2. Binder solution was prepared by dissolving the MCAD and MCAF in water at 1.0%, 2.0%, 3.0% and 4.0% w/v concentrations. The batch size was 100gm. The drug, lactose, aerosil, and MCC were mixed thoroughly and sufficient volume of 20 ml of 1.0%, 2.0%, 3.0% and 4.0% w/v MCAD and MCAF was added slowly to powder blend, and kneading was performed for near about 10 min until the formation of wet mass with enough cohesiveness. The wet mass forced through the sieve # 16 and dried at 40-45oC in hot air oven for 2hr. The dried granules were received through sieve # 20.

Drug- Excipient Compatibility Studies: The dried and coarsely powdered seeds of C. aungostifolia yielded high percentage using MCAD and MCAF method; 6.69% w/v and 10.30% w/v respectively of mucilage using acetone and ethanol as mucilage precipitating solvent. The thermograms of drug and mucilage of C. aungostifolia shows that there is no change in melting point which confirms that there is neither change in crystallinity of the drug nor any interaction fig. 1. Further drug polymer interaction was checked by comparing the IR spectra of the physical mixture of drug with the Mucilage of C. aungostifolia used with the IR spectrum of pure drug. 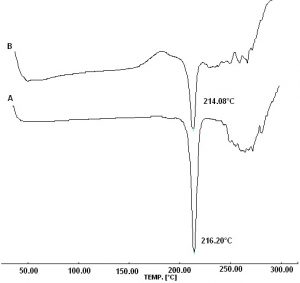 FIGURE 1: DSC OF, A) PURE DRUG DILTIAZEM HCL AND B) DRUG WITH MUCILAGE (MCAD AND MCAF)

Frequencies of functional groups of pure drug remained intact in physical mixture containing C.aungostifolia fig. 2 so it was concluded that there was no major interaction occurred between the drug and C. aungostifolia used in the study.

The physicochemical and microbiological properties of mucilage of C. aungostifolia were determined, results shows mucilage were under microbial limit. The results are presented in table 4 and 5 respectively.

Acute Toxicity Study: Acute toxicity studies were conducted according to OECD guidelines no. 423. The results shows that there is neither a behavioral change nor change in body weight which show no toxicity induced from mucilage (MCAD and MCAF).

In vitro Evaluation of Tablet: To understand the release profiles of the drug from the tablets, eight batch of tablet were prepared using mucilage of C. aungostifolia (MCAD and MCAF) at each four different concentration (1.0%, 2.0%, 3.0% and 4.0% w/v); xanthan gum mucilage (4.0%w/v) was used as standard binder for comparison. The prepared tablets were evaluated for content uniformity, hardness, friability, disintegration time, dissolution profile. All the batches of tablet exhibited good uniformity in content. Hardness of tablet increased with increase in concentration of mucilage.

The tablet prepared with 4.0%w/v MCAD and MCAF showed the hardness nearly equal to the tablet prepared by using 4.0% w/v of xanthan gum. The percentage friability values were slightly decreased as increase in concentration of mucilage. Through increase in hardness of tablet, increase in concentration interestingly showed decreased in disintegration time of tablet.  In vitro dissolution study showed that drug release from the tablets prepared by using mucilage at four different concentrations was more than 95% in 2hr (fig. 3). 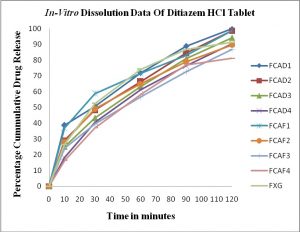 Accelerated Stability Studies: The stability study of optimized batch was carried out at 25°C/60% RH, 30°C/65% RH and 40°C/75% RH as per ICH guidelines. The tablets of all formulation were found to be stable at such condition and other parameters were found to be unaffected and were under Pharmacopoeial limits.

Formulations of 1.0, 2.0, 3.0% w/v mucilage exhibited less hardness and disintegration time, when compared with 4.0% w/v xanthan gum binder formulation, but the formulations have enough hardness to withstand the mechanical shocks of  handling in manufacturing and packing. Taking all the above parameters into consideration, the study has revealed a good potential of C. aungostifolia mucilage as a binder for conventional tablet formulations and as per OECD guideline it doesn’t show any toxicity. So it can also be used for sustaining the drug release from tablets at higher concentration, since the prepared tablets using C. aungostifolia seed mucilage produces a sticky film of hydration on the surface. Moreover it may prove economical as binding property of 4.0% w/v C. aungostifolia mucilage is almost equivalent to 4.0% w/v xanthan gum.