INTRODUCTION: The population of bacteria in the soil is maximum as compared to all other groups of microorganisms in both number and variety. Bacteria bring about a number of changes and biochemical transformations in the soil and thereby directly or indirectly help in the nutrition of higher plants growing in the soil. Soil bacteria play crucial role in decomposition of complex organic matter, ammonification, nitrification, denitrification, biological fixation of atmospheric nitrogen, oxidation and reduction of sulphur and iron compounds. Soil bacteria also produces many important enzymes.

Which have been used in industries on large scale. Increased usage of enzymes is due to their excellent prospects. L-asparaginase, a relatively widespread enzyme, found in many microorganisms has attracted much attention in the past decade because of its antineoplastic activity.

The present study is an attempt to isolate and identify a novel soil bacterium that produces L-asparaginase in quantities that can prove to be a good source for commercial productions.

All chemicals used in this study investigation were of analytical grade and procured from Hi – media (India) and Merck (India).

Primary Screening: Soil samples were collected from Garden and Mangroove soil of CBD Belapur, MS, India and forest soil of Vasai, Maharashtra State, India, in sterile polythene bags, transported to the laboratory aseptically and stored at 4°C for further use. 10 gram of the soil sample was inoculated in 100 ml of sterile modified M9 broth (g/l) (3.0 KH2PO4, 6.0 Na2HPO4, 0.5 NaCl, 0.12 MgSO4.7H2O, 0.001 CaCl2.2H2O) containing 1% L-asparagine, and incubated at 300C for 48-72 hours.

The diluted samples were spread on sterile modified M9 agar plate containing 1% L-asparagine and 0.005% phenol red. Enzyme production was accompanied by an increase in pH of the medium, which resulted in the formation of pink zone that help in identification 8, 9. The selected colonies were maintained on nutrient agar slant at 4oC.

Agar cup method was carried out to quantify the enzyme. Sterile nutrient agar was modified by adding 1% L-asparagine and 0.005% phenol red. Sterile nutrient agar without L-asparagine and phenol red served as control. The isolates were grown in 10 ml sterile nutrient broth for 18 hrs and 20 microliters each were added in the respective wells. Plates were incubated for 24 hrs at 300 C. Diameter of pink zones around the well were measured to quantify the amount of enzyme produced.

Morphological, cultural and biochemical characteristics of the isolate were studied and compared with standard description of Bergey’s Manual of Determinative Bacteriology 10.  pH and salt tolerance study was carried out in sterile nutrient broth and agar with different pH and salt concentrations. The potential isolate was identified by 16S rRNA sequencing method (Chromus Biotech pvt ltd, Bangalaore). The sequence was aligned with representative sequence. The sequence was then submitted to NCBI for accession number.

The enzyme was assayed by direct nesselerization method 11. One unit of L-asparaginase activity (IU) is defined as the amount of enzyme which liberates l μmol of ammonia per min at 30 0C and pH 7.4 11, 12.

The isolate was cultivated for 16 hrs at 300 C in shaking condition and the harvested culture  was transferred to 250 ml Erlenmeyer flasks with 100 ml sterile modified M9 broth medium incubated in a shaker incubator (120 rpm, 30 0 C) for 72 h. After incubation, the cells were removed by centrifugation at 10000 rpm for 10 min. The supernatant was used to assay extracellular L-asparaginase activity 11, 12. The enzyme was assayed by nesslors method12.

Microbes in the soil are important for soil fertility, biogeochemical cycles and various industrial products such as enzymes, antibiotics, vitamins, hormones and organic acid. Agricultural practices, research on plant growth and bioremediation are the major thrust areas for exploiting the potential of soil microbial flora. Commonly enzymes have been isolated and purified from microorganisms because of their broad biochemical diversity, feasibility of mass culture and easy genetic manipulation. LA plays important role of N mineralization in soil. LA has been isolated from various soil bacteria. Soils may possess novel microbial strains with novel properties of biotechnological interest.

Novel LA producing bacteria with antileukemic potential have been reported from these ecosystems. Hence in the current study mangrove and forest soil had been chosen for screening of LA producing bacteria. There are reports that cultivated soil also has potential microbial flora. Hence garden soil used in study served the control of cultivated soil.

Out of total 885 screened isolates only 15 isolates were found to be positive for L-asparaginase production by rapid plate assay method 9. Pink zone around the colonies indicated production of L-asparaginase (Fig 1 and 3). The isolates were further tested for LA production. Selected 15 isolates through primary screening were positive in that they showed intense pink zone around the colonies on modified M9 medium. It is noteworthy that in primary screening mangrove soil exhibited maximum number of LA positive isolates, indicating that this niche may prove to be a valuable source of microbial flora for biotechnology (***p <0.0001). 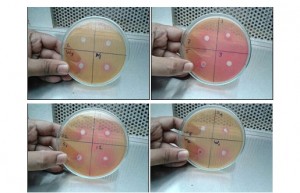 Secondary screening was carried out by agar cup method followed by enzyme assay. Among 15 selected bacterial isolates tested by rapid plate assay, only four isolates gave prominant pink zone with diameter ranging from 2 to 2.5 cm after 24 h incubation. Out of these, isolate M from forest soil was found to be one of the good LA producer as it exhibited 2.5 cm pink zone (Table 2). Isolate number W2/M gave maximum pink color zone (Table 1) with enzyme activity of 15.94 IU /ml (Table 2). All other isolates were found to produce less extracellular enzyme than isolate M. Hence Isolate M was selected for further study. There are no reports of use of agar cup method for screening of LA producers; however there are many reports that justify the selection of potential isolate depending on the diameter of pink zone around LA producing colonies 9, 17, 18.

The morphological and cultural characteristics of the isolate M are appended herewith. The colonies of isolate were opaque, with entire margin, flat elevation, dry granular surface with orange pigmentation. The isolate was found to be gram positive cocci (Table 3). It was found to be non motile sporulating bacteria.  The isolate M was exposed to different pH range (3-12) and concentrations of sodium chloride (2%-14%), exhibited growth at pH range of 6-12 and tolerated sodium chloride concentrations of 2%-12% respectively.

The isolate showed no growth at pH 3-5 and beyond 12 % sodium chloride (Table 4). The isolate M was subjected to various biochemical tests. The isolate showed negative results for IMVic tests. It was nitrate reductase positive, produced catalase and oxidase enzymes. It was noteworthy that the isolate M did not produced acid by utilization of any sugar. It utilised only glucose, manitol, sucrose, lactose, maltose and rhamnose sugars (Table 5).

TABLE 5: RESULTS OF BIOCHEMICAL TESTS OF ISOLATE M AFTER 24 H OF INCUBATION IN BROTH. 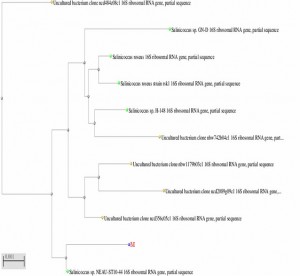 FIG.4: PHYLOGENETIC TREE OF ISOLATE M, OBTAINED WITH THE HELP OF SOFTWARE SEQ SCAPE_ V 5.2. NEIGHBOUR JOINING TREE BASED ON 16S RRNA GENE SEQUENCE WITH APPLICATION OF JUKES-CANTOR MODEL AND BOOTSTRAPPING A STATISTICAL TOOL. INDICATING THAT ISOLATE M AS A NOVEL UNEXPLORED ISOLATE

The results of biochemical tests are in accordance with Salinicoccus sp. Based on the morphological, physiological and biochemical characterization, the isolate M was identified as Salinicoccus sp. In order to confirm the same and to identify the sub-species level 16S rRNA sequencing was carried out. It revealed that the isolate belongs to genus Salinicoccus. Blast analysis revealed that the isolate under study is a novel Salinicoccus sp. M with Gene Bank Accession Number as KJ9979720. Phylogenetic tree was constructed by taking the sequences obtained in the blast search (Fig. 4). Enzymes of alkalophilies and halophilies have made great impact in industrial applications and tremendous use in human life. Sparse literature is available on LA producing Salinicoccus sp. and thus this warrants extensive study to identify its commercial prospects. This is the first kind of report of LA production from any Salinicoccus sp. from soil sample.