ABSTRACT: Most low density bags are made from polythene, a chemically inert compound consisting of carbon and hydrogen. Burning of this plastic waste and burying of the plastics releases harmful toxic material which is a major pollutant in environment. Degradation of waste plastics through microorganism is the alternative method to deal with such problems. In this present study low density polythene bags degrading bacteria were isolated from greater Visakhapatnam dumping yard. Out of 20 isolates, one isolate was selected, due to its significant activity in biodegradation of polymer. After 30 days of incubation the isolate resulted 28% in weight loss of polythene bags. SEM images of the treated polythene bags confirmed that the isolate is having significant biodegradation ability by forming holes on the surface. Increased biomass of the bacteria on polymer and decreased biomass in spent medium indicates the significant utilization of polythene, as carbon source. The degraded material contains 5x102 CFU/mL of bacteria. Morphology and biochemical tests confirmed that isolate belongs to Pseudomonas sp. This work reveals that the atmospheric conditions of Visakhapatnam supports the biodegradation of plastic materials by microorganisms to control pollution of terrestrial and marine regions in some extent.

Non microbiological methods not result complete degradation of plastic and results in environmental pollution. Recently many biotechnological works are carried to degrade plastic materials using microorganisms. Biodegradable polymers are designed to degrade upon disposal by the action of living organisms 1. Microbial degradation of plastics is caused by enzymatic activities that lead to a chain cleavage of the polymer into monomers 2. Microorganisms utilize polythene film as a sole source of carbon resulting in partial degradation of plastics. This polythene is the most typically found non-degradable solid waste recognized as a major threat to human and marine life 3. In this present work we made an attempt to isolate polythene degrading bacteria from dumping yard located in Visakhapatnam.

Collection of sample from dumping yard for isolation of bacteria: Polythene bag samples were collected for isolation of bacteria from different dumping yards located in Visakhapatnam. The samples were washed with sterile water and serially diluted. The diluted samples were plated in petriplates with nutrient agar medium and incubated at 37oC for 3 days. After 3 days the colonies identified, purified by sub culturing repeatedly and finally maintained as stock culture on nutrient agar slants at 4oC.

To determine the degradation of polythene bags the isolated bacteria inoculated in two different media. The first medium prepared by including glucose-50g/L as carbon source and incorporating mineral salts like K2HPO4-3g/L, peptone-10g/L, MgSO4.7H2O-2.5g/L, volume made upto 1L with distilled water. The second medium prepared similar to the first medium but excluding glucose. Both the media were incorporated with pieces of polythene bags purchased from local market and sterilized by autoclaving. The flasks were inoculated with isolated bacterial suspension and incubated in rotary shaker at 120 rpm for 30 days. For every ten days of time interval percentage of weight loss of polythene bags were measured.

The bacterial count on surface of degrading plastic bags and in surrounding media was measured by serial dilution and pour plate method. 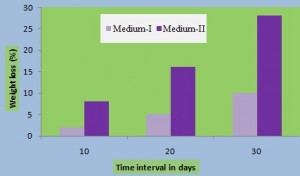 The second medium which excluded with glucose, utilized polythene material as carbon source. The organism colonized on the surface of the polythene films to form a biofilm. The biofilm formation on polythene surface enhanced the biodegradation of polymer. Once the organisms get attached to the surface, starts growing by using the polymer as the carbon source. The main polymer chain cleaved to produce low molecular weight fragments like oligomers and further degraded to produce dimmers and monomers which were utilized as carbon source to promote the growth of the bacterium. Fig. 2, 3 and 4 shown that the holes created by the selected bacterial isolate for every 10 days of time interval. This reveals that the isolate is having significant biodegradation ability on polymers.

FIG. 2, 3 AND 4: DEGRADATION OF POLYTHENE BAGS BY THE SELECTED BACTERIAL ISOLATE AFTER 10, 20 & 30 DAYS OF INCUBATION

The temperature and moisture level in air of Visakhapatnam promotes the growth of pseudomonas organisms. Reports showing that Pseudomonas sp., having degradation ability on plastic materials 6, 7. Pseudomonas sp., usually produces biofilms on surface of different inert and food materials. So, the property is used in degradation of polythene bags where the isolate produced very thick biofilm on surface of polythene bags.

The bacterial count in medium-I was 35x105 CFU/mL and in medium-II the count was 5x102 CFU/mL. This shows that glucose incorporated medium promotes the growth of organism because of availability of rich amount of simple sugar in surrounding medium. So, the spent medium contains more growth when compared to the surface of polythene bags. Medium-II which devoid of glucose provides less growth in surrounding medium and provides more growth of organism on the surface of polythene bags where the polymer act as carbon source to assist the formation of biofilm on surface of polythene bags and resulted more degradation of bags and the spent medium contains less bacterial count. SEM images shown in Fig.8 and 9 confirmed that the bacterial isolate is having significant degradation after 10 days of incubation by forming clear holes on the surface of polymer. 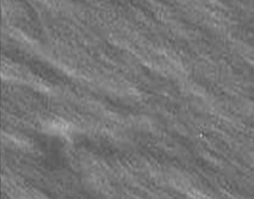 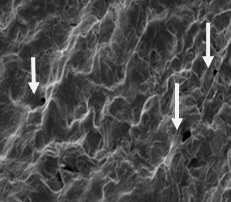 CONCLUSION: Significant polythene degrading bacterium was identified as Pseudomonas sp. The selected isolate is having a property of formation of biofilms on surface of different materials. This property may be utilized in degradation of polythene bags efficiently. Visakhapatnam is nominated to develop as smart city. So, there is a need to introduce some methods to remove waste materials to reduce pollution. Finding the methods of decomposition of waste material by microorganisms is useful some extent in biodegradation of undegradable waste material like polythene to reduce pollution in this city.

ACKNOWLEDGEMENT: Author would like to thank Dr. Y. Srinivasarao, Principal of VIGNAN Institute of Pharmaceutical Technology and students for providing their support to complete the present work.