ABSTRACT: A galactose-specific lectin was purified from seeds of a leguminous plant, Bauhinia variegata, by affinity chromatography on lactose–agarose. Protein extract agglutinated human erythrocytes (treated with proteolytic enzyme). Among various carbohydrates tested, the lectin was best inhibited by D-galactose and other sacharides. SDS-PAGE showed that the lectin, named BVL produce a single band establishing that the lectin is composed of similar type of subunits. The antimicrobial activity of the purified lectin was carried out by agar ditch diffusion method at different concentrations using appropriate standards. BVL demonstrated a remarkable antibacterial activity against the pathogenic bacteria Pseudomonas aeroginosa, Staphylococcus aureus, Escherichia coli, and Bacillus subtilis. BVL also shows a significant antifungal activity against Aspergilas niger and Penicilium crysogenum

INTRODUCTION: Lectins are carbohydrate-binding proteins that interact with specific sugars or glycoconjugates and mediate several biological activities such as cell–cell interactions, fungi and bacteria adhesion to host cells and immune responses, among others 1, 2. Due to their properties, these proteins have been used in the isolation and structural characterization of glyco-conjugates, blood typing and studies of the architecture of the cellular surface 3,  4, 5. Because of their effects in processes such as immunosupression, mitogenicity and cytotoxicity, they have been used as tools in immunology, cellular biology and cancer research 6.

In spite of their wide distribution, the best studied lectins are those obtained from plants, especially from the Leguminosae family. In fact, these proteins have been used for decades as model systems for the study of protein–sugar interactions, because of their wide range of specificities 6. However, almost all well-characterized Leguminosae lectins are from the Papilinoidae subfamily, and until now only a few lectins from the Caesalpinoideae species have been reported, such as Bauhinia purpurea 7 and Griffonia simplicifolia 8. B. purpurea agglutinin (BPA) is a galactose-specific lectin which exhibits a clear preference for the sequence Gal β1-3 GalNAc 7.

Indeed, this lectin has been widely used in multifarious cytochemical and immunological studies of cells and tissues under pathological or malignant conditions 6. There is global resurgence of medicinal plants in treatment occasioned by the emergence of multiple antibiotic resistances in recent years. Infectious diseases are the world’s leading cause of premature deaths, killing almost 50,000 people every day. In recent years, drug resistance to human pathogenic bacteria has been commonly reported from all over the world. However, the situation is alarming in developing as well as developed countries due to indiscriminate use of antibiotics. The drug-resistant bacteria and fungal pathogens have further complicated the treatment of infectious diseases in immune compromised, AIDS and cancer patients 9. In the present scenario of emergence of multiple drug resistance to human pathogenic organisms, has necessitated a search for new antimicrobial substances from other sources including plants.

The growing resistance of microorganisms to conventional antimicrobial agents is a source of concern to clinical microbiologists all over the world. As a result, efforts are being made to develop antimicrobial agents from local sources for better chemotherapeutic effects. The demand for more natural antimicrobials has driven scientists to investigate the effectiveness of inhibitory compounds such as extracts from plants. Various publications have documented the antimicrobial activities of plant extracts. Thus plant extracts are promising natural antimicrobial agents with potential applications in pharmaceutical industry for controlling the pathogenic bacteria. Plant materials contain mostly glycoproteins that are toxic in nature; they play a key role in the control of various normal and pathological processes in living organisms. So far more than hundred lectins have been purified and characterized but their antibacterial and toxicological studies against mortality of pathogens is scanty. So our attention was to carry out the antimicrobial activity of the lectin purified from bauhinia variegata seeds.

In this paper, isolation, purification and antimicrobial potential of a lectin from seeds of B. variegate (BVL) is reported.

Plant material: All experiments were carried out with B. variegata seeds collected from Jawaharlal Nehru Agriculture University, Jabalpur.

Fifty grams of the seed were de-skinned & soaked overnight in 7.2 pH phosphate buffer. It was then homogeneted in phosphate buffer and the homogenate was filtered through four layers of cheese cloth and the filtrate thus obtained was centrifuged at 10,000 rpm for 30 minutes. The supernatant was then collected and ammonium sulphate was added to the sample with constant stiring to a concentrant of 100% saturation and kept overnight at 4°c. The precipitate thus formed was collected by centrifugation as above, the obtained precipitate was than dissolved in minimum amount of phosphate buffer and then dialysed extensively  against three changes of PBS (pH 7.2),and then checked for heamagglutination  activity 10. This was labeled as crude extract.

Protein concentration was determined by Bradford method 13, using bovine serum albumin as standard. Readings at 280 nm were used to determine protein content of the column elute.

Crude extract of seeds of B. variegata were homogenized with 100 mM Tris- Hcl, pH 7.6, containing 0.15 M NaCl (1:20 w/v) for 3 h at room temperature. This crude protein fraction was loaded onto a lactose–agarose column equilibrated and eluted with extraction buffer at a flow rate of 30ml. min–1 until the column effluent showed absorbance at 280 nm of less than 0.05. Bound proteins were eluted with 100 mM lactose in equilibration buffer. The elution was monitored at 280 nm and 3 ml fractions were collected manually and tested for haemagglutinating activity on human trypsinized erythrocytes. Active fractions were pooled, dialysed extensively against Tris-Hcl buffer pH 7.6, freeze-dried and stored at 4°C until use.

The purified lectin was screened for their antimicrobial activity by using agar ditch diffusion method 15 by measuring the diameter of the inhibitory zones in mm using different concentration of purified lectin in methanol. The diameters of the zones of inhibitions of the samples were than compared with the diameter of the zone of inhibition produced by the standard antibiotic such as Fluconozol (antifungal), ciprofloxacin (antibacterial). Nutrients agar medium and potato dextrose agar were used for determining antibacterial and antifungal activities respectively.

Legume lectins represent the largest and most thoroughly studied family of the simple lectins. The members of this protein family consists of two or four subunits (protomers), either identical or slightly different each with a single small carbohydrate combining site with the same specificity. The crude extracts strongly agglutinated native human red blood cells (Table 1). Similar results were found with I. Heterantha 16. However, the crude extracts of B. purpurea and B. vahlii exhibited low haemagglutinating activity when in contact with human blood of the ABO system 6 A lectin was purified from seeds of Bauhinia variegata using affinity chromatography coloumn yielding a single apparent lectin at 3.4% (w/w) of the total starting seed weight. Similar results were found with A. jiringa seeds 17.  The protocol employed to purify the seed lectin from B. variegata by affinity chromatography on lactose–agarose column (Fig. 1) was simple and very efficient, yielding about 1.7 mg lectin g-1 at pH 7.6. 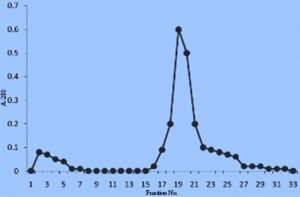 FIG. 1:  PURIFICATION OF THE LECTIN FROM B. VARIEGATA BY AFFI NITY CHROMATOGRAPHY ON AN AGAROSE–LACTOSE COLUMN. THE COLUMN WAS EQUILIBRATED AND WASHED WITH Tris-HCl 100 mM pH 7.6 CONTAINING 150 mM NaCl TO REMOVE UNBOUND PROTEINS. THE LECTIN WAS RECOVERED WITH 100 mM LACTOSE IN EQUILIBRATION BUFFER (ABSORBANCE AT 280 nm).

In 12.5% SDS-PAGE, the lectin moved as a single band, establishing that the lectin is composed of similar type of subunits (Fig. 2) with molecular weight of approximately 32 KDa. 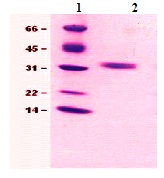 In order to determine the sugar specificity of the lectin, inhibition and reversal of inhibition by a number of sugars and sugar derivatives was studied. In each case the ability of the sugar to inhibit agglutination was measured. Results on such specificity studies are shown in (Table 2). It is clear from the table that D-Gal is the most potent inhibitor of the Bauhania variegata lectin mediated hemagglutination followed by the disaccharide lactose. D-GalNac also inhibits agglutination though at very high concentrations. The carbohydrate specificity was similar to the lectin from Capsicum annum19.

NI- No inhibition at 100 mM concentration

Purified lectin obtained from affinity chromatography as well as the crude extract were tested against different bacterial strains and compared to that of antibacterial antibiotic, ciprofloxacin. The results of the sensitivity test are shown in (Fig. 3). Purified BVL (different conc. in μg/ml) exhibited a significant antibacterial effect on four strains namely Pseudomonas aeroginosa, Staphylococcus aureus, Escherichia coli, and Bacillus subtilis. The diameters of the zones of inhibition by the addition of BVL is shown in (Table 3). The diameters of the zones of inhibition with the standard drug used were 20 mm, 18 mm, 20 mm and 18 mm for the four strains respectively. The studied lectin showed a remarkable antibacterial activity against Bacillus subtilis, Staphylococcus aureus, Escherichia coli and Pseudomonas aeroginosa.

Although, the mechanism of action of the peptides has not yet been elucidated in detail, the presented data confirm in vitro antibacterial activity of BVL against pathogenic bacteria. It has been proposed that the proteins with antibacterial action form a channel on cell membrane and the cell dies as a result of the out flowing of cellular contents, this mechanism being different from that of antibiotics16.

In vitro antifungal susceptibility by BVL was determined against two pathogenic fungi Aspergillus niger and Penecillium crysogenum with fluconozole as positive control. The lectin showed significant inhibition of growth against both strains with a zone inhibition diameter as shown in (Table 4). The observed anti- fungal activity of BVL against A. niger and P. crysogenum, agrees with the results obtained from other plant legume lectins 12, 16.

The results of the present study have shown that BVL in vitro possess potent antimicrobial activity on different species. It has also has significant haemagglutination activity. In future the protein isolate could be used for blood typing, bacterial typing and may have the potential to play role as biotechnological tools. Hence, further work can be continued for exploring its medicinal value as well as its other biomedical uses.

The authors express gratitude to the Department of Biological sciences, R.D University, Jabalpur for providing  necessary support to carry out this work.