Categories Menu
Home » ISOLATION AND SCREENING OF CYANOBACTERIAL CULTURES FROM BILASPUR DISTRICT OF CHHATTISGARH: EXTRACTION AND PURIFICATION OF BIO-ACTIVE METABOLITES

ISOLATION AND SCREENING OF CYANOBACTERIAL CULTURES FROM BILASPUR DISTRICT OF CHHATTISGARH: EXTRACTION AND PURIFICATION OF BIO-ACTIVE METABOLITES

ISOLATION AND SCREENING OF CYANOBACTERIAL CULTURES FROM BILASPUR DISTRICT OF CHHATTISGARH: EXTRACTION AND PURIFICATION OF BIO-ACTIVE METABOLITES

ABSTRACT: Metabolites from natural sources (microbes, plants, animals) have helped to double the human life span during the 20th century, combated pain and suffering, and revolutionized the practice of medicine. Microbes have provided compounds that have cured or reduced the effect of human diseases for 70 years. Microbial products include antibiotics against bacteria and fungi, antitumor drugs, immunosuppressants, enzyme inhibitors including hypocholesterolemics, anti-parasitic agents, bioherbicides, plant growth regulators, biopesticides and bioinsecticides. Cyanobacteria produce many compounds with activities such as neurotoxic, anti-proliferative, anticancer and anti-infective. These are Gram-negative photoautotrophic prokaryotes carrying out oxygenic photosynthesis. They are known as blue-green bacteria due to their production of C-phycocyanin, a blue green pigment used for photosynthesis. Their products have anticancer, anti-bacterial, anti-viral, immunomodulatory and protease-inhibition activities. The present study was performed in order to isolate and screen the cyanobacterial cultures for the metabolites of nutraceutical importance. The results showed the isolation of cyanobacterial cultures viz. Anabena sp and Cylindrospermum sp. The 75% populations of dominant isolates were of Anabena sp while 25% population isolated was of Cylindrospermum sp. The cultures were maintained in aseptic conditions at 25 ± 2 ºC and illumination at 4000 lux with a white continuous light and a regime of 16 h light / 8 h dark. The metabolites were extracted by the liquid broth cultures of above mentioned cyanobacterial cultures using a) ethyl acetate: chloroform (1:1 ratio) and b) pre chilled acetone. The crude extracts were collected and dried and further processed for GC-MS analysis. The results revealed the identification of cluster of fatty acids (C-1 to C-3). The results observed that, in crude extract of Anabena sp., C-3 fatty acid was found in 90% concentration while in crude extract of Cylindrospermum sp., C-2 fatty acid was found in 90% concentration. These fatty acids will be further processed for in-vitro antioxidant activities having nutraceutical significance.

INTRODUCTION: Cyanobacteria are single-celled organisms that live in fresh, brackish, and marine water.

They use sunlight to make their own food thus referred as photosynthetic bacteria. Some cyano-bacteria species are heterotrophs. These can be found in the soil, water and in both freshwater and marine water habitats. These can be either unicellular or multi-cellular.

They form spherical-shaped, filamentous or sheet-like colonies. The photosynthetic pigments in cyanobacteria are chlorophyll a, phycocyanin, and phycoerythrin. Phycocyanin is a blue colour pigment and phycoerythrin is a red colour pigment. In warm, nutrient-rich environments, microscopic cyanobacteria can grow quickly, creating blooms that spread across the water’s surface and may become visible. Because of the colour, texture and location of these blooms, the common name for cyanobacteria is blue-green algae. However, cyanobacteria are related more closely to bacteria than to algae.

Cyanobacteria are ancient organisms that inhabit the crust of the Earth and have some specialized features to accommodate the changing or different environmental conditions 1. Light, pH, temperature, and nutrient availability have received much attention because they participate in making the cyanobacteria withstand almost all the ecosystems. Cyanobacteria can be use as a source of nutraceuticals as it has an efficient nutritional value. It is riched source of protein, carbohydrates, lipids and other pigments. They possesses vital role in neutraceuticals and pharmaceuticals and is very vast and thrusting area of research 2-9.

The present study is about the isolation and screening of cyanobacteria species from the water bodies of Bilaspur, Chhattisgarh region. The study was carried out in order to extract and purify the metabolites having nutraceutical importance from isolated cyanobacterial cultures.

Isolation and Culture Conditions: Water samples were collected from local water bodies of Bilaspur, Chhattisgarh region. The water samples in laboratory were cultured in BG-11 medium with or without nitrogen source, after colonization, Cyanobacterial colonies were transferred to fresh medium. Unialgal cultures were prepared using sub culture method. Each isolated was cultured in a 500 ml flask containing 150 ml of BG-11 medium without shaking for 30 days. The incubation temperature was 25 ± 2 ºC and illumination at 4000 lux with a white continuous light and a regime of 16 h light / 8 h dark. Further the cultures were isolated by standard plating and streaking techniques.

Preparation of Cell Extracts: The two isolates of Cyanobacteria were isolated and identified. Each of the cyanobacterial cultures were inoculated separately in liquid broth maintained in sterilized and aseptic conditions at 25 ± 2 ºC and illumination at 4000 lux with a white continuous light and a regime of 16 h  light / 8h  dark. The metabolites were extracted by the liquid broth cultures of above mentioned cyanobacterial cultures using a) ethyl acetate: chloroform (1:1 ratio) and b) pre chilled acetone. Further, the organic layer was collected; solvent was evaporated in rotary evaporator. The crude extracts obtained were further processed for GC-MS analysis for identification of bio-active metabolites 10.

Sample Preparation: The crude sample extracts of each of the strains of Cyanobacterial metabolites were dissolved in 1 ml 0.4% EDTA solution, spiked with 30 µl of formic acid and acetic acid (25 µM each, in methanol) as internal standards prior to extraction. A modified extraction procedure was applied 11, in which 3.9 ml of a CHCl3: MeOH (2:1, v/v) solution was added to the sample. After vortexing, the mixture was centrifuged at 900 g for five minutes. The lower phase, containing all the lipids, was isolated in a screw-capped glass test tube (16.5 × 105 mm) and the solvent was evaporated under a gentle stream of nitrogen. Trans-esterification was carried out based on the method and adapted to the pellicle matrix. The sample was dissolved in 0.2 ml of chloroform, 2 ml of methanol and 0.1 ml of conc. HCl (35%, w/w) were added in this order to the sample solution. The solution was overlaid with nitrogen and the tube was tightly closed. After vortexing, the tube was heated at 100 °C for 1 h. Once cooled to room temperature, 2 ml of hexane and 2 ml of water were added for extraction of Fatty acid methyl esters (FAMEs). The tube was vortexed, and after phase separation, the hexane phase was by isolated and evaporated under a gentle stream of nitrogen. The residue was re-dissolved in 0.1 ml hexane and 1 µl of this solution was injected for GC-MS analysis.

Identification of Crude Extracts by GC-MS Analysis: GC/MS analysis of some of the active metabolites present in each of the crude solvent extract was performed at NCS Green Earth Pvt. Ltd., Nagpur, Maharashtra, India using a Perkin Elmer GC Claurus 500 system and Gas Chromatograph interfaced to a Mass Spectrometer (GC/MS) equipped with Elite-1 fused silica capillary column (30 m × 0.25 mm) composed of 100% Dimethyl poly siloxane) from Perkin Co., Germany. For GC/MS detection, an electron ionization system with ionization energy of 70 eV was used. Helium gas (99.999%) was used as the carrier gas at a constant flow rate of 1 ml/min and an injection volume of 2 µl was employed (split ratio of 10:1). Injector temperature was 250 °C while Ion-source temperature was 280 °C.

Total GC running time was 36 min. The relative percentage amount of each component was calculated by comparing its average peak area to the total areas. Software adopted to handle mass spectra and chromatograms was a Turbo Mass Ver 5.2.0.

Data Evaluation: The retention time (RT) values of the fatty acids separated were used for qualitative analysis. When ionization was applied, the M+ ion of each fatty acid was visible in the mass spectrum. Quantification of data obtained was performed using the peak area ratios relative to that of internal standards.

Least squares regression analysis was implemented, using the peak area ratios against increasing standard concentrations to obtain calibration linearity. Peak area ratios of the unknown samples were referred to this calibration curve. Prior to the sample run, a blank sample and the seven calibration standards were measured.

Method Validation: Statistical analysis was done, referring to the guidelines for method validation. The main performance characteristics were selectivity over the analyte, linearity of the response, closeness to the true value, precision of the obtained results and detection and quanti-fication limits.

The limit of detection (LOD) and limit of quantification (LOQ) were defined to the lowest concentration with a signal-to-noise (S/N) ratio > 3 for LOD and 10 for LOQ. The precision expressed as the coefficient of variation (% CV) and the accuracy as the percentage relative error (% bias) were determined from the QC samples at two different concentrations based.

RESULTS: In the present investigation, the two cultures of cyanobacteria i.e. Anabena sp and Cylindrospermum sp were isolated from 10 water samples of local water bodies of Bilaspur, Chhattisgarh region. The results showed that, 75% dominant isolates were of Anabena sp while 25% population isolated was of Cylindrospermum sp. Table 1 and Fig. 1.

The solvent extraction of each of the broth cultures was done using two different solvents i.e. a) ethyl acetate: chloroform (1:1 ratio) and b) pre chilled acetone in order to extract and purify the bio-active metabolites. The bio-active metabolites samples were further processed to GC-MS analysis. The GC-MS spectra revealed the presence of fatty acids (C-1 to C-3) in each of the extracts.

The solvent extraction was performed by using two different solvents i.e. a) ethyl acetate: chloroform (1:1 ratio) and b) pre chilled acetone for extraction and purification of bio-active metabolites.

The results thus suggested that, cyanobacterial species are the significant source of bioactive metabolites which might have variable pharmacological activities. The results of the study correlate with the previous findings 12-19. 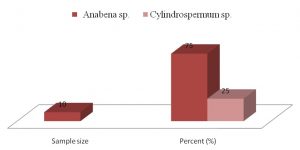 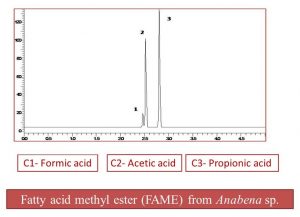 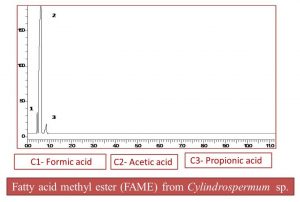