ABSTRACT: Objectives: The intention of the present study was to isolate and identify cultural conditions of potent fungal strain VJCH-19 with antagonistic activities isolated from mangrove ecosystems of Adavuladeevi, South coast, Andhra Pradesh, India. Methods: The soil samples were collected from the mangrove habitats and shade dried. The serial dilution plate technique was employed for the isolation of mangrove fungi by using Sabouraud dextrose agar and Czapek-Dox agar media. All the strains were screened for the production of antimicrobial compounds. The potential fungal strain was designated as VJCH-19. The identification of the strain was carried out based on cultural, micro-morphological and genomic characteristics. Results: The potent mangrove fungal strain VJCH-19 was identified as Simplicillium lanosoniveum. The secondary metabolites produced by the strain inhibited several bacteria and fungi. To check the nutrient adaptation, VJCH-19 was grown on different culture media and its morphological characters were observed. Conclusion: Among the twenty-five fungal strains, VJCH-19 was found to possess antimicrobial potential and the strain was identified as Simplicilium lanosoniveum VJCH-19.

INTRODUCTION: Mangroves are salt-tolerant forest ecosystems confined to intertidal zones of sheltered shores, estuaries, tidal creeks, backwaters, lagoons, marshes, and mudflats of the tropical and subtropical latitudes 1. Mangrove soils provide a unique ecological niche for the growth of diversified microorganisms which find use in recycling environmental nutrients and production of exclusive secondary metabolites of industrial importance 2, 3, 4.

Isolation of fungi from unexplored soil samples may provide novel bioactive metabolites. Mangrove soils are a potential source of rare fungi possessing antimicrobial activity against pathogenic micro-organisms. There is plenty of scopes to isolate such rare strains that produce novel compounds beneficial to mankind. As part of our ongoing project of screening of different mangrove ecosystems of Andhra Pradesh, India, a potent strain VJCH-19 with broad-spectrum activity against Gram-positive and Gram-negative bacteria as well as fungi was found. An attempt has been made in the present study to identify the potent strain based on the cultural, micro-morphological and molecular approaches.

Isolation of Fungi: The shade dried soil samples were used for the isolation of fungi by serial dilution plate technique. Czapek-Dox agar (CDA) and Sabouraud-dextrose agar (SDA) media amended with sodium chloride (2%) are used for the isolation of fungi. Streptomycin (50µg/ml) was added to retard the growth of bacteria. Aliquots of samples were prepared through serial dilution plate technique. An aliquot of 0.1ml of each dilution (10-2 to 10-4) of samples was spread evenly over the surfaces of CDA and SDA media. The plates were incubated at 37 °C and observed for fungal growth. After seven days of incubation, the fungal colonies were picked up, preserved on SDA slants and stored at low temperature for further study.

Identification of the Potent Fungal Strain:

Cultural Characteristics of the Strain VJCH-19: The potent fungal strain was cultured on different culture media such as SDA, CDA, NAM, MEA, YMA, and PDA.  After seven days of incubation, colony characteristics were observed 10.

Morphological Characteristics of the Strain VJCH-19: The fungal isolates were identified initially by morphological characterization through plating the fungi on SDA and incubated for seven days. The growth and presence/absence of pigmentation were noted. The fungi were identified by studying their cultural characteristics, spore formation, and mycelium arrangement. Slides were prepared by the tease mount method using Lacto-phenol Cotton Blue (LPCB) reagent 11.

The conidia morphology of strain VJCH-19 was studied under the scanning electron microscope (SEM). Samples were fixed in 2.5% glutaraldehyde in 0.1 M phosphate buffer (pH 7.2) for 24 h at 4 °C and postfixed 2% in aqueous osmium tetroxide for 4 h. Dehydrated in a series of graded alcohols and dried to critical point drying with CPD (EMS 850) unit. The processed samples were mounted over the stubs with double-sided carbon conductivity tape, and a thin layer of gold coat over the samples was done by using an automated sputter coater (Model - JEOL JFC-1600) for 3 min and scanned under Scanning Electron Microscope (SEM - Model: JOEL-JSM 5600) at required magnifications as per the standard procedures 12, 13.

Molecular Identification of the Strain VJCH-19: The Genomic analysis of fungal strain VJCH-19 was done using 18s r RNA sequencing technique. The fungal isolate was identified based on the internal transcribed spacer (ITS) sequences. Fungal genomic DNA was extracted from mycelia by using the cetyl trimethyl ammonium bromide procedure. The rDNA ITS region was amplified using primers ITS1 and ITS4 14.

The primers were synthesized at an oligonucleotide synthesis facility (Macrogen, Seoul, Korea) and diluted to 20µM in sterilized water. PCR products were purified using a QIAquick PCR purification kit (Qiagen, Valencia, CA, USA), according to the manufacturer's protocol 15.

The Amplifications were performed in a PCR verity 96-well thermal cycler (Applied biosystems), programmed with denaturation at 95 °C for 5 min, followed by 3 cycles consisting of denaturation at 96 °C for 5 s, primer annealing at 50 °C for 5 s, extension at 68 °C for 18 s, and the final elongation step at 72 °C for 1 min. After amplification of the ITS templates, excess primers and dNTP’s were removed from the reaction mixture using a QIA quick, PCR DNA purification kit (Qiagen).

The PCR products were sequenced directly in both directions using primers ITS1, ITS2, ITS3 and ITS4 using a Big Dye Terminator v3.1 cycle sequencing kit (Applied Biosystems) 16. The cycle sequencing reaction mixture had a total reaction volume of 10µl and contained 2.5µl of template DNA (10-15ng/ul), 2µl BigDye terminator premix, 4µl ultra pure-sterile water and 0.5µl of each primer (5 pmol/µl). Reactions were run in the PCR thermal cycler, programmed with denaturation at 96 °C for 1 min, followed by 25 cycles of denaturation at 96 °C for 10 s, followed by the primer annealing at 50 °C for 5 s and the extension at 60 °C for 4 min. Sequencing products were purified by ethanol/ ethylene diaminetetra acetic acid (EDTA), and the samples were analyzed on an ABI PRISM 3130 Genetic Analyzer (Applied Biosystems) 15.

Pair-Wise Sequence Alignment: The gene sequence of the strain VJCH-19 was aligned using BLAST against the gene library available for Simplicillium species in the NCBI and the GenBank. Pairwise evolutionary distances were computed by MEGA-6 software 17.

Multiple Sequence Alignment: The phylogenetic analysis was conducted using the maximum parsimony method using BLAST and CLUSTAL W. The closely related homologous strains were identified, retrieved and compared to the sequence of the isolated strains using CLUSTAL W available with the MEGA 6 version 17. The 18S rRNA gene sequence of the strain VJCH-19 was registered in the GenBank database.

Growth Pattern of the Strain VJCH-19: For determination of growth pattern, the strain was inoculated into 250 ml flasks containing 100 ml Sabouraud-dextrose broth with 2% NaCl. The culture broth was incubated at 30 ± 2 °C on a rotary shaker at 180 rpm. The flasks were harvested at four days interval up to twenty-eight days and the growth of the strains was determined by taking the dry weight of mycelium. The culture filtrates obtained after separating the biomass were extracted with ethyl acetate and the antimicrobial activity of the crude extract was determined by agar well diffusion method.

Extraction of Metabolites and Antimicrobial Assay: The antimicrobial activity of the strain was determined by agar well diffusion assay 18. The homogenous culture suspension prepared by suspending 7-day-old culture in sterile saline was used to inoculate SD broth (seed medium) and incubated at 30 °C for seven days on a rotator shaker at 180 rpm. Seed culture at the rate of 10% was transferred to SD broth (fermentation medium). The fermentation was carried out at 30 ± 2 °C for twenty days under agitation at 180 rpm. The antimicrobial compound was recovered from the filtrate by the solvent extraction method. Ethyl acetate was added to the filtrate (1:1) and shaken vigorously.

The ethyl acetate extract was evaporated to dryness on a water bath and the residue thus obtained was used to determine antimicrobial activity. Ethyl acetate itself was used as a negative control. About 80 μl of the crude extract and 80 μl of negative control were poured into separate wells. The standard antibiotic disc was placed on the agar surface as a positive control. Plates were incubated at 37 °C for 48 h, and inhibition zones (mm) were measured.

Isolation and Screening of Fungi From Mangrove Soils: A total of twenty-five fungal strains were isolated from the soil samples of Adavuladevi mangrove habitats and designated as VJCH-1 to VJCH-25. All the isolates were subjected to screening against selected bacteria and fungi. Interestingly, the isolate VJCH-19 exhibited potent activity against test bacteria and fungi. The strain VJCH-19 was subcultured on SDA supplemented with 2% NaCl and preserved for further studies.

Cultural and Morphological Characteristics of VJCH-19: Cultural characteristics of VJCH-19 was studied on six different media viz. SA, CDA, NAM, MEA, YEA and PDA and the results are shown in Table 1. VJCH-19 exhibited excellent growth and produced pale yellow pigment on SA and MEA media. There was no pigmentation on CDA, NAM, YEA, and PDA. The colonies are compact, white, with a fluffy texture, reaching 18 – 30 mm diameter after 7 days of incubation at 30 °C Fig. 2A. Mycelium is septate, branched filamentous. Phialides produced on prostrate aerial hyphae are mainly solitary and tapering towards the tip 16, 21. Conidia are found in small globose heads at the apex of phialides 20. Conidia are mostly oval, smooth-walled and 1-celled 14, 16.

The apical conidium of the conidial chains subglobose to obovoid Fig. 2B.

Molecular Identification of the Strain VJCH-19: The phylogenetic tree was constructed based on the Neighbor-joining method using bootstrap analysis 22 and the strain VJCH-19 was identified as Simplicillium lanosoniveum. The partial 16S rRNA sequences of the strains were submitted to the GenBank database with accession number MK463995. The partial sequence was aligned and compared with all the 18S rRNA gene sequences available in the GenBank database using the multi-sequence advanced BLAST comparison tool. The phylogenetic analysis of the 18S rRNA gene sequence was aligned using the CLUSTAL W program from the MEGA 6 Version. Phylogenetic tree Fig. 1 is constructed using MEGA software Version 6 using maximum parsimony method 17. 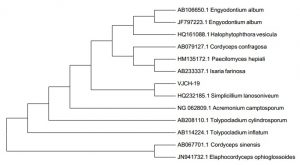 Growth Pattern and Antimicrobial Profile of Simplicillium lanosoniveum VJCH-19: The growth curve and antimicrobial profile of Simplicillium lanosoniveum VJCH-19 were studied at regular intervals up to twenty-eight days in batch culture. The strain entered into log phase on fifth day which extended up to twenty days. Stationary phase is extended from twenty-one to twenty-four days of incubation and finally entered into decline phase Fig. 3. The secondary metabolites obtained from twenty day-old culture showed high antimicrobial activity against the test microbes.

The antimicrobial spectrum of the strain cultured on SD broth for twenty-eight days was tabulated in Table 2. The metabolites extracted from the twenty day-old culture showed maximum activity against E. coli, B. megaterium, P. vulgaris and S. mutans. In case of fungi, C. albicans showed high sensitivity as compared to P. citrinum. 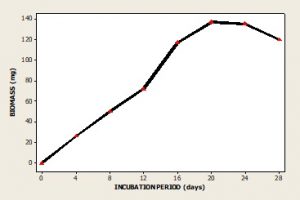 CONCLUSION: The present work leads to in-depth studies on bioactive fungal isolates which can produce many valuable products necessary for medical, agricultural and industrial applications. The identification and production of novel anti-microbial metabolites from mangrove fungi is an important exclusive approach to defeat the progressive levels of drug-resistant micro-organisms. Hence, further studies will be carried out on purification, characterization and identification of bioactive metabolites of mangrove fungus Simplicilium lanosoniveum VJCH-19.

ACKNOWLEDGEMENT: Financial support from UGC, New Delhi is gratefully acknowledged (MVL). Authors would also like to thank the authorities of the Department of Botany and Microbiology, Acharya Nagarjuna University, Guntur for providing the facilities to carry out this work.