Sonja Jose * and B. Jaykar

ABSTRACT: Cyclea peltata (Lam), belonging to the family Menispermaceae, is a common plant in South India. It is mentioned in Ayurvedic classics by Rajapatha and is one of the important drugs used in Ayurveda therapeutics and is used widely in different formulations in medical practice. The quality control of crude herbal drugs and their bio constituents is paramount in justifying their acceptability. The crude drugs can be identified systematically on the basis of their morphological, histological, chemical, physical and biological studies. Phytochemical screening reported the presence of alkaloids, carbohydrates, glycosides, phyto sterols compounds and proteins and amino acids. The plant is widely used in the treatment of cough, fever, kidney disorder, urinary disorder and snake poisoning. The aim of the present study is to extract and isolation of bioactive compound (Thymol) from Cyclea peltate (Lam) Hook f. Thoms, the isolation and characterization analysis, included Thin Layer Chromatography, High-Performance Thin Layer Chromatography, GC-MS and Spectroscopy studies (IR, NMR and MASS). The presence of thymol in the ethanolic fraction revealed that the isolated constituent is the most active compound. Isolation of bioactive compound thymol may help in the identification of various pharmacological activities and carrying out further research in C. peltata.

INTRODUCTION: Cyclea peltata (Lam.) Hook. f. and Thomson is a member of the family Menispermaceae, which is also known as Patha root in English. In Ayurveda, it is well known as rajapatha and is mentioned in most of the ayurvedic texts like Charaka Samhita, Sushruta Samhita and Ashtanga hridya 1. Cyclea peltata is a much-branched, climbing shrub found throughout South and East India 2. Roots are tuberous, leaves peltate, hairy 2-5 cm long, flowers are very small. Male flowers in panicles, very long. Fruit-drupe, reniform. The species of this plant are easily distinguished by the cup-shaped calyx and corolla 3.

Cycleapeltatais widely used in the treatment of cough, fever, kidney disorder, urinary disorder and snake poisoning. Powdered roots are used for the treatment of diabetes, tooth ache, decoction of the roots and leaves are used for treating malaria and asthma 6. The plant contains various chemical constituents of alkaloids, carbohydrates, glycosides, phytosterols compounds, proteins and amino acids. Other alkaloids such as bisbenzylisoquinoline alkaloids, tetrandrine, tropoloisoquinoline alkaloids such as pareirubrine A and B, etc., are reported, contributing to its pharmacological properties 7. 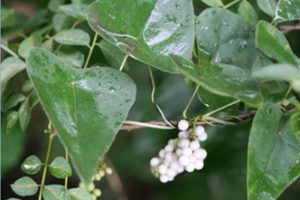 Collection of Plant Material: The fresh sample leaves of Patha Cyclea peltata (Lam) Hook. f. Thoms) were collected from their natural habitat near Sasthamcotta, Kollam district, Kerala.8 Samples were authenticated (PHARM 17 BO3) by the pharmacognosist and the voucher specimens were kept in the Lab of Dept. of Aromatic and medicinal plants research station Odakkali Kerala agricultural university. They were shade dried and packed in a zip lock polythene bag and labeled.

Extraction: The collected plant materials were washed twice in running tap water and shade dried at room temperature for 3 weeks. The air-dried plant leaves were pulverized, using an electric blender to make a fine powder. A total of 3 kg of powdered C. peleata leaves was sequentially extracted with ethanol using a Soxhlet apparatus until the efflux solvents become colorless. The after extraction, the extract passed through the Whatman filter Paper (Whatman No. 1) to avoid impurities and dried under vacuum at 40 °C. The dried crude methanol extract was stored in a freezer at 4 °C for further study 9. 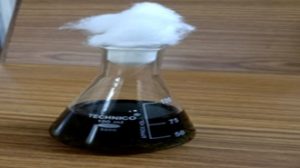 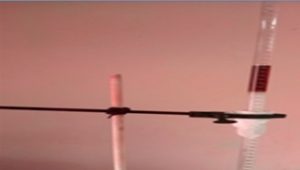 The starting crude spots were observed for migration and separation by the previously prepared mobile phases. R values of the obtaining colored and non-colored spots with the aid of visible and UV lamps were recorded. Using silica gel plates (20• 20 cm dimensions and 0.50 mm thickness of 60GF254 ﬁne grade), the active bands were gathered, dissolved in ethyl acetate, and concentrated to dryness in the vacuum 11. The methanol extract of each fraction was purified and analyzed by GC-MS and HPLC. The structure of isolated compounds was characterized by spectral studies UV, FT-IR, NMR, and MASS studies.

Infrared 13: One mg sample of extracted crude was subjected to IR-spectral analyses using Infrared Spectrophotometer. Mid-IR region of 400-4000 cm-1 was used for sample analysis. A mixture of spectroscopic pure KBr was in the ratio of 5:95; pellets were ﬁxed in the sample holder.

Thin Layer Chromatography Separation: Separation of the compounds standards by TLC by methanol extract of C. pelata was dissolved in 50 mL of hot water and extracted three times with 50 mL of ethyl ether and ethyl acetate, respectively. Solvents from all of the fractions were removed with a rotary evaporator to obtain the ethyl ether and ethyl acetate extract. The ethyl ether extract was separated by TLC (normal-phase plates, ethyl ether–hexane, 1:5, v/v), and the nine zones found on the TLC plate could be visualized under UV light at 254 nm. Each zone was scraped from the plate and extracted with methanol. The methanol extract of each fraction was analyzed by GC-MS and HPLC. 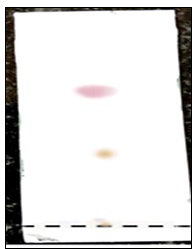 Based on the Rf values of the bands, the active principles were identified with the standard. Under UV light - for terpenoid system. TLC of thyme visualized with UV light) shows spots and based on relative Rf values, after elution, the purity of each fraction was tested by analytical TLC, which showed clear separation of fractions. This fraction was scraped and collected Fig. 4. for further analysis.

GC-MS Analysis: In GC –MS Analysis, there are many compounds identified and named as (519- Penene, 566 - Isoquinolinamine, 602- benzene, 650- Thymol, 720- Eugenol, and 778- Dodecane, GC-MS spectra given in Fig. 5. Among them further, the thymol is focused and subjected to isolation, purification procedure and isolated compound Thymol's structure was identified by spectral studies 15. 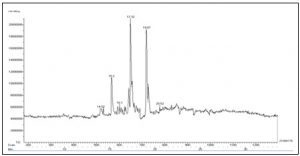 HPLC Analysis: The purity of isolated compounds was checked by HPLC analysis and spectra were recorded and given in Fig. 6.

UV- Spectrum Analysis of Isolated Compound: AS per the reference the UV visspec Fig. 7. analysis the isolated fraction of thymol shows 276 nm peak, confirmed as Thymol with the reference6. 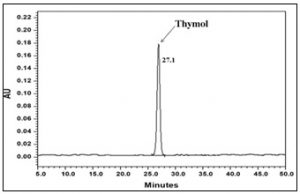 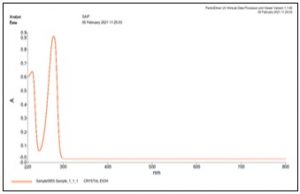 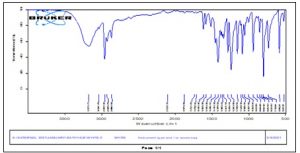 FTIR- Spectrum Analysis of Isolated Com-pound: FTIR spectrum Fig. 8. of purified Thymol shows many peaks corresponding to functional groups present in the structure of the isolated compound. There was a broad peak at 3173.71 cm-1, which corresponds to the Hydroxyl group (O-H). The aromatic C-H stretching peak was observed at 3031.78 cm-1 while aliphatic C-H stretching was observed in 2886.89 cm-1,C=C stretching frequency was found at 1618.30 cm-1. The absorption band at 1873.55 and 1156.81 cm-1 corresponds to the C-C stretch of the Benzene ring and C-O bend, respectively 16.

NMR- Spectrum Analysis of Isolated Compound: NMR of Thymol and it was found that the coupling constants JAA' and JBB' change whereas the constants JAB and JAB' remain practically unchanged. The chemical structure of thymol from the NMR peak assignments of proton and carbon signals was in accordance with the reference literature. The spectrum Fig. 10. shows two sets of two chemically equivalent aromatic protons, predicted from the integration values, resonating at δ 7.32 and 6.89 ppm. The two protons, close to the inductive electron-withdrawing effect of the oxygen atom were assigned to signal at δ 7.32 (2H, d, J = 8.8,). The other two aromatic protons were assigned to signal at δ 6.89 (2H, d, J = 8.8,).The structure of thymol was detected as a single peak at δ 6.44, which is respective to hydroxyl protons. It is well separated from the signals of the other compounds. The isolated compound thymol, typical Phenolic structure signals NMR analysis of the isolated fraction compared to existing literature 16. 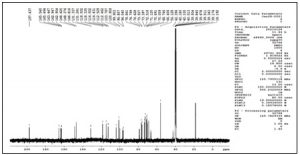 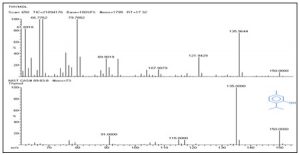 CONCLUSION: The bioactive compound was isolated by chromatographic techniques (TLC), Purified using HPLC and GC-MS analysis. Finally, the structure of the compound was appraised by FTIR, NMR, and MASS spectroscopy studies which revealed that the isolated compound is thymol compare with the standard. The above result concludes that the methanolic extract of plant C. Peltata is a good source of thymol. Hence, this study recommends that the isolated active compound thymol can be used as a prototype molecule for the medicinal drug.

ACKNOWLEDGEMENT: This research did not receive any specific grant from funding agencies in public, commercial, or not-for-profit sectors. The authors acknowledge the support of Vinayaka Mission Research Foundation, Ariyalur, Salem, Tamilnadu, India.

Sonja Jose * and B. Jayakar