ISOLATION, CHARACTERIZATION OF DEGRADATION PRODUCTS OF SITAGLIPTIN AND DEVELOPMENT OF VALIDATED STABILITY-INDICATING HPLC ASSAY METHOD FOR SITAGLIPTIN API AND TABLETS

ISOLATION, CHARACTERIZATION OF DEGRADATION PRODUCTS OF SITAGLIPTIN AND DEVELOPMENT OF VALIDATED STABILITY-INDICATING HPLC ASSAY METHOD FOR SITAGLIPTIN API AND TABLETS

ABSTRACT: The degradation pathway of sitagliptin in bulk and tablet has been investigated during stress study. Major degradation products were isolated in pure form and characterized using mass and NMR spectroscopy. Three previously unreported impurities were found to be, 3-(trifluoromethyl)-6, 7-dihydro[1,2,4]triazolo[4, 3-a]pyrazin-8(5H)-one, (2E)-1-[3-(trifluoromethyl)-5, 6-dihydro[1, 2, 4]triazolo[4, 3-a]pyrazin-7(8H)-yl]-4-(2, 4, 5-trifluorophenyl)but-2-en-1-one and (3E)-1-[3-(trifluoromethyl)-5,6-dihydro[1,2,4]triazolo[4, 3-a]pyrazin-7(8H)-yl]-4-(2, 4, 5-trifluorophenyl)but-3-en-1-one. Further,   a stability-indicating reverse phase HPLC assay method was developed on Poroshell 120 EC-C18 (3X150mm, 2.7µ) column using mobile phase consisting of 5mM ammonium acetate and acetonitrile with gradient elution in presence of spiked degradation products and impurity. The flow rate was 0.5ml/min and detection was at 210nm. The method was found to be linear over 10µg-500µg/ml (r2>0.999). The method was validated with respect to accuracy, precision, specificity, robustness and found to be stability indicating. 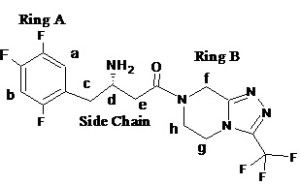 There have been several methods in the literatures for the determination of sitagliptin alone in bulk and formulation using spectrophotometer 5, in biological fluids using HPLC 6, LC-MS/MS 7, HTLC-MS/MS 8, molecularly imprinted solid-phase extraction (MISPE) combined with Zwitter ionic HILIC 9.

Forced degradation of API and Tablets: Stress testing of the drug substance can help identify the likely degradation products, which can in turn help to establish the degradation pathways and the intrinsic stability of the molecule and to develop and validate the stability indicating power of the procedures used 17. Stress studies were performed on API and tablet powder using 0.5mg/ml solutions. Considering good solubility of sitagliptin phosphate, all stress study solutions were prepared in water.

Samples were withdrawn from stress study samples at particular intervals and diluted with water: methanol (1:1), in order to achieve solubility of water insoluble impurities and to obtain 0.2mg/ml final concentration. All samples were filtered through 1µ membrane filters before subjecting to LC analysis for monitoring degradation behavior by injecting 15µl of each sample.

Oxidation studies: Solutions for oxidation studies were prepared in 5% H2O2 and kept in oven at 55ºC for 2 weeks. Sufficient amount of samples were withdrawn at regular intervals for monitoring degradation of analyte.

Photo stability studies: Drug substance and tablet powder were exposed to light, as a layer (1mm thickness), spread in a petridish using photo stability chamber (Binder, KBF 720-ICH-LIGHT) for 10 days. Following removal of the samples from the light cabinet, 0.2mg/ml conc. samples were prepared for HPLC analysis using methanol: water (1:1) as a diluent.

DP-IV and V were generated by refluxing drug tablet powder in water at 130ºC for four days. All the stressed samples were concentrated and impurities in the pure form were isolated on preparative LC using 5mM ammonium acetate in water and acetonitrile mobile phase in gradient elution. Each isolated fractions were concentrated and passed through C-18 column on preparative LC using water-ACN to remove ammonium acetate. Each pure impurity fraction was concentrated on rotavapor, dried under high vacuum and stored at -20ºC.

N-acetylated impurity was not observed during stress study and was synthesized in our chemistry laboratory. Sitagliptin API was stirred in DCM at room temperature along with acetyl chloride and triethyl amine for 24 hr and then extracted with ethylacetate. The impurity was then purified on preparative HPLC using water, acetonitrile as mobile phase on a C-18 column. Each isolated degradation product was tested for HPLC purity and found to be >98%. N-acetyl impurity was characterized by NMR and Mass (Fig. 3E)

Preparation of Standard and Sample Solutions:

Best possible peak shape and sensitivity was observed with o-phosphoric acid (0.1%) and acetonitrile. Further, method development was initiated to obtain stability indicating method for sitagliptin in presence of spiked degradation products. Due to very polar nature of DP-I and DP-II, it was difficult to get separation with acidic mobile phase, whereas neutral pH mobile phase was a better choice. Water with methanol or acetonitrile had not given proper separation and peak shape. Ammonium acetate (5mM) with methanol and acetonitrile were tried and found good separation with acetonitrile combination on Agilent eclipse XDB-C18 (4.6X250mm, 5µ) column.

Finally poroshell column was selected due to its sensitivity, resolution and reproducibility over other columns.  The final chromatogram with spiked impurities and degradation products for the optimized method is given in Fig. 2.

This indicated parent molecule has been cleaved at amide bond and triazolopyrazine moiety got oxidized at one of the carbon atom. gCosy NMR spectra showed correlation between two adjacent CH2 groups confirming the location of carbonyl group. 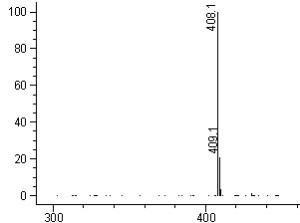 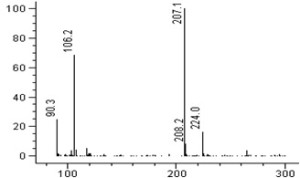 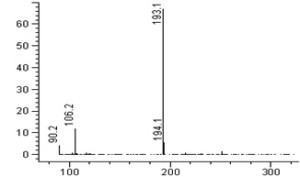 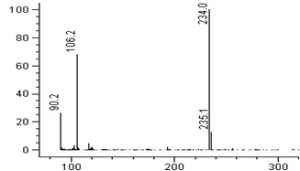 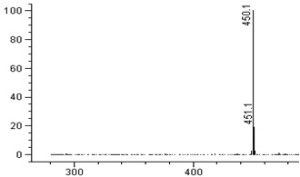 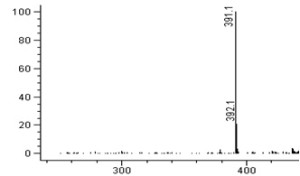 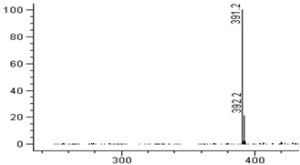 The 1H NMR spectra of both degradation products found to be similar with respect to number of peaks and chemical shifts. Appearance of two olefinic protons in the region of δ 7-6, disappearance of one of the two CH2 protons of side chain and retention of ring A and B protons confirm deamination. Further study was required to assign location of double bond formation in two isomeric degradation products.

The gCosy NMR spectra of these degradation products have shown differential correlation of olefinic protons and side chain -CH2 protons, which indicated DP-IV and DP-V are differing in position of double bond on this side chain. 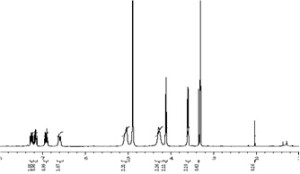 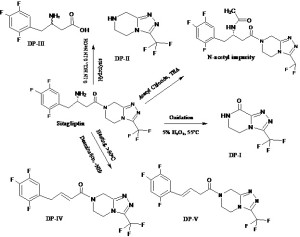 The comparative proton NMR assignments with respect to Fig. 1 are shown in Table 2.

Validation of the method: HPLC method validation was performed as per ICH guidelines 18 for the estimation of sitagliptin in presence of degradation products and N-acetyl impurity.

Accuracy: Accuracy of the method was evaluated in triplicate at three concentration levels, i.e. 80%, 100% and 120% of the test concentration (100µg/ml) by spiking known amount of analyte to the tablet powder. The results obtained including the mean recovery and percent RSD are displayed in Table 3.

Precision: The intra and inter-day precision were assessed by using standard solutions prepared to produce six solutions at test concentration of 100µg/ml and percentage RSD values were calculated and summarized in Table 4.

Specificity: The result of monitoring standard solution of drug in presence of their spiked degradation products and N-acetyl impurity indicated high degree of specificity of the method. Specificity was confirmed by peak purity studies using PDA detector.

LOQ and LOD: The LOQ was determined as the lowest amount of analyte that was reproducibly quantified. The resultant percent RSD of six replicate injections was found to be 0.4. The LOQ that produced the requisite precision was found to be 1µg/ml. The LOD was 0.5µg/ml, determined based on signal to noise ratio which was three times the background noise.

Linearity: Linearity solutions were prepared from stock solution at six different concentrations from 10µg/ml to 500µg/ml and assessed by injecting the same over three consecutive days. The calibration curve were constructed from the resultant data and found excellent correlation (Correlation Coefficient >0.999) between the peak area and corresponding analyte concentrations. The data are summarized in Table 4.

TABLE 4: DATA FOR SITAGLIPTIN FROM LINEARITY AND PRECISION STUDY

Robustness: Robustness of the method was investigated under variety of conditions including change of flow rate, mobile phase composition, column temperature and buffer composition using spiked degradation products along with N-acetyl impurity at 1% of analyte concentration. The analyte was adequately resolved from all the spiked impurities and all the impurities were tolerably resolved from one another. The data representing main peak retention time and resolution with nearest impurity (N-Acetyl) are summarized in Table 5.

CONCLUSION: Degradation products of sitagliptin were successfully isolated, purified and characterized by mass, NMR and IR spectroscopy. The structures of three novel degradation products were elucidated, which were not reported earlier. Further, a precise, accurate and sensitive mass compatible stability indicating HPLC assay method was developed and validated according to ICH guideline. This method is novel and superior as it involves the separation of three additional novel impurities. The proposed method can be used for the analysis of stability samples of sitagliptin in bulk and tablet formulation.

ACKNOWLEDGEMENTS: Authors would like to thank Drs. Rashmi Barbhaiya and Kasim Mookhtiar for permitting to carry out this research work. Advinus Internal Publication No. ADV-A-021.